Home » Writings » How the Brain develops the Mind

with minor editing by
Chris Cowan

This feature was originally published on the old Humberside Partnership Connexions web site in June 2001.

Developed by Don Beck & Chris Cowan (1996) from the ground-breaking work of Clare W Graves (1970) and integrating Richard Dawkins’ (1976) concept of ‘memes’, Spiral Dynamics expands exponentially Abraham Maslow’s (1943) human motivation model, Hierarchy of Needs. It is the most advanced of the ‘Levels of Existence’ theories – yet, at the same time, its ‘map’ of human motivation is very easy to use.

The biggest field trial of Spiral Dynamics to date was in South Africa in the early-mid 1990s when Don Beck used it to help Nelson Mandela and F W DeKlerk design the transition from Apartheid to multi-cultural democracy. However, it has also influenced the Community Policing Policy of Victoria, New South Wales, been championed as a means of investigating new strands of racism on the Atlantic Seaboard and more recently has been taken up by Dutch Traffic Planners(!).

The work of Neuro-Linguistic Programming (NLP) psychologist Robert Dilts (1990) on Neurological Levels provides a useful frame for understanding Spiral Dynamics. Dilts identifies that the mind orders its perceptions of the world at 5 levels….

Spiral Dynamics concerns the relationship between Identity/Values & Beliefs (internal) and the (perceived) Life Conditions (what’s going on) in the Environment (external).

The model identifies 8* core ways of thinking – coping mechanisms, worldviews or, in the vernacular, Value Systems or Value MEMES (vMEMES) – which develop in a hierarchical fashion in response to changing Life Conditions. (*A ninth way of thinking is thought to be emergent – the model is theoretically open-ended as the brain’s capability to devise new ways of coping is said to be limitless.)

A basic overview of the model is as follows:-

The pairing of letters – eg, B-O – represents the double helix nature of the Spiral where B is the (perceived) Environment (Life Conditions) and O is the neurologically-activated coping mechanism developed by the brain in response to that perception. 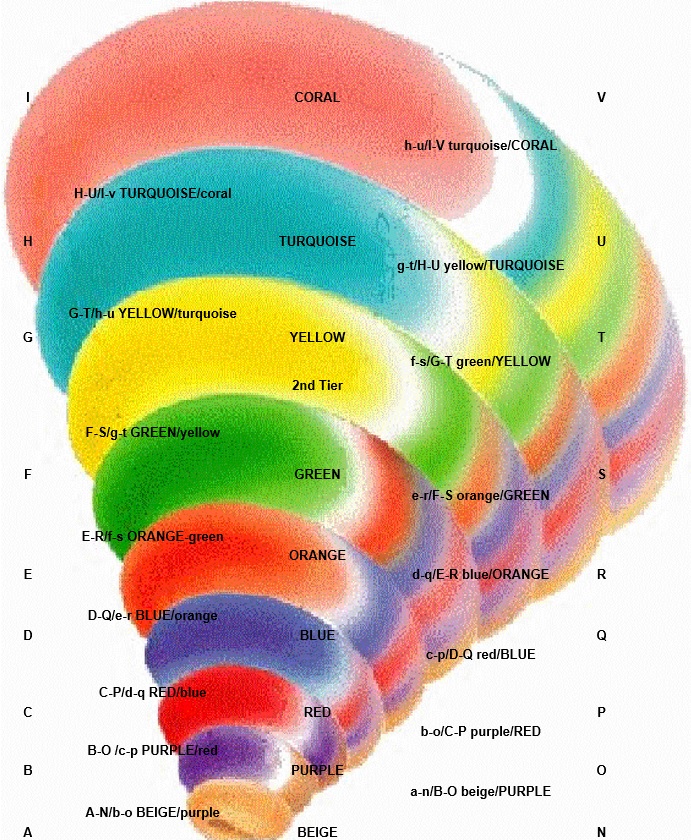 The vMEMES are depicted here in peak form. However, Spiral Dynamics provides two transition points between each peak vMEME – eg, PURPLE/red (B-O/c-p) and (purple/RED) b-o/C-P – an entering and an exiting phase – as one coping mechanism fades in a given context and the next one emerges.

This assumes, of course, that the latent neurological networks in the brain are in sufficiently healthy condition for the next vMEME to emerge.

Transition can take considerable time – or it can happen very quickly – so quickly the change can almost appear instantaneous. In very extreme cases, it has even been known for people to take a ‘Quantum Leap’ up several vMEMES almost at once!

The relationship with the ‘teacher’ is critical – that person must be a mystical, shamanistic figure.

Respect for the ‘teacher’ as a hero figure is important – but the teacher must also show respect back to the blossoming egos.

RED–BLUE  transition
What pleases (or is immediately relevant) is still central but there is also some desire now to know what the procedures for learning are – and that leads to WHAT should be learned.

The work set will be done because it is ‘the correct thing to do’ – but don’t expect imagination in the work or more than is set!

The ‘teacher’ is now a resource to be used.

ORANGE–GREEN transition
Broader concerns now start to emerge and there is a need to make sure everybody is getting opportunities.

The ‘teacher’s’ job is to facilitate the development of the group and individuals within the group.