In terms of Integrated SocioPsychology a vMEME stack is simply the spread of vMEMES influencing the selfplex and their strengthening and weakening – brightening and dimming, flowing and ebbing – across different domains of life and relative to the life conditions impacting upon the individual, group or organisation and what their focus is.

In their 1996 book ‘Spiral Dynamics’ Don Beck & Chris Cowan introduced what became known as ‘the fried egg’ to illustrate how different vMEMES formed a stack. Always, of course, BEIGE is at the core. If BEIGE stops functioning, we lose our will to live! 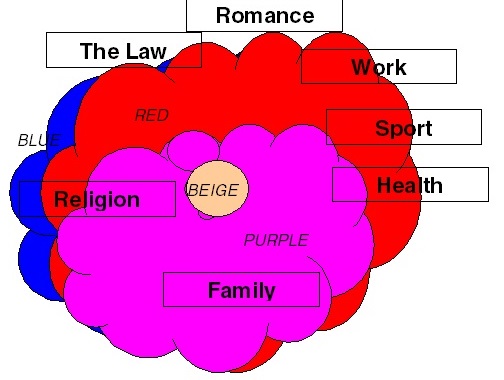 In the higher fried egg the person is primarily PURPLE-centred but with a large dose of RED and some emergent BLUE. This person is very likely to be narcissistic and family-oriented.

With PURPLE dominating in that environment, family, in fact, is a huge part of their life. It’s quite likely that extended family – grandparents, cousins, aunts/uncles – will feature quite markedly on their social calendar. They are also likely to be very defensive of their family and family members.

There may be other forms of belonging that are extremely important to them – eg: church/synagogue/mosque/temple, club, women’s organisation or work colleagues.

This person’s religion would match the stereotypical Roman Catholic profile, with a fondness for ritual (PURPLE) and tormented by the struggle between self-indulgent Id RED and conscience-driven do-the-right-thing Superego BLUE, to draw in Freudian concepts and enhance the idea of mental conflict between different desires.

They are likely to be obsessed with their own well-being (RED) and physical looks (RED); individualistic ego-pumping sports like bodybuilding may suit this person if their belongingness needs are met elsewhere. If they do play team sports, then they will be a loyal team member but also prone to selfish displays – eg; hogging the ball on a football pitch rather than passing it to a fellow team member with a better goal-scoring opportunity. If there is a tendency to the temperament dimension of Neuroticism, they might be something of a hypochondriac.

Their RED is so strong that it would be no surprise that one-night-stands and sexual deviance often characterise their love life – especially if they are high in Psychoticism. If they were married/in a stable relationship, they might see themselves as loyal but they would be vulnerable to temptations to stray. Only when it comes to the Law and God does this person really recognise a power greater than self – and then it would be a case of compliance through fear of a higher authority (red/BLUE), rather than being ‘the right thing to do’ (nodal BLUE). 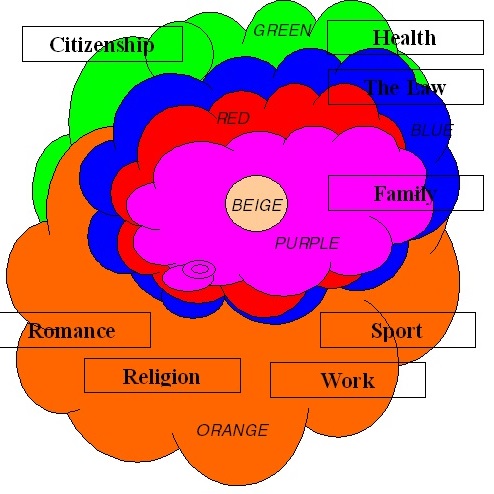 By contrast the person represented by the lower fried egg is likely to be something of a ‘high flyer’, driven by ORANGE across most of their life domains and able, by and large, to sublimate more basic vMEMES.

From this profile, you can judge that family, for this person, is as much about duty (BLUE) as it is belonging (PURPLE).

Generally speaking, this person will be fairly law-abiding (BLUE) but will break the speed limit when there’s a career- important meeting they are late for (ORANGE) or simply when the thrill takes them (RED).

Interests in sport are likely to concern golf clubs and the kind of sports centres where the ‘right kind of contacts’ can be made. Likewise, their romantic partner is likely to be someone who can fit in to career progression – eg: the wife of an upward-climbing middle manager who can do dinners and ‘entertaining’ to the point where the managing director feels she is ‘suitable’.

Since RED is not that far below the ORANGE surface in this make-up, the spouse risks replacement by a more up-market model. (The quite common occurrence of successful older businessmen marking their higher status by dumping their wife of perhaps 20 years and effectively ‘buying’ a younger ‘trophy wife’.)

This person goes to the church/synagogue/mosque/temple to be ‘seen’. Just emerging on this person’s psychological horizon is the concept of Citizenship and the ‘bigger picture’.

There’s enough GREEN influencing their selfplex for them to give consideration to alternative therapies like homeopathy when they have medical needs. 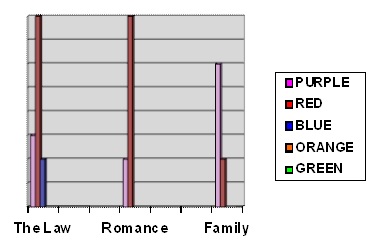 When I was putting the finishing touches to ‘Knowing Me, Knowing You’ in early 2006, Humberside MESH Network collaborator Steve Gorton (of Enabling Development) suggested I liken the bar chart approach to a hi fi graphic equaliser and the vMEMES to different frequencies – their pulses strengthening and weakening in response to life conditions changing in the environment. 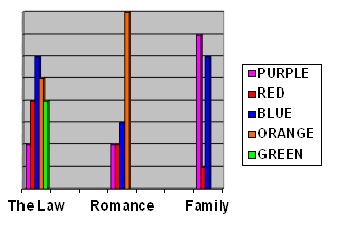 When Graves enthusiasts talk about ‘life conditions’, often what they really mean is ‘the environment’. Trainers often use life conditions-vMEME matches like “RED seeks to dominate when life is like a jungle” or “BLUE seeks to impose order when all around is chaos”’. I’ve used such matches myself – so no criticism of other trainers intended! We use such matches because they’re useful for getting across the double helix nature of Clare W Graves’ theory – the symbiotic relationship between the life conditions and the vMEMES influencing the selfplex. This is one of the key elements which gives the Gravesian approach greater explanatory power than most similar developmental theories. (See Comparision Map.)

However, “like a jungle” and “all around is chaos” are statements about the environment. Such jungle-RED and chaos-BLUE statements, while certainly not inaccurate, tend to make vMEMETIC interaction with the environment seem rigid, even fossilised – almost a typology. Which may be why so often we get descriptors such as ‘RED people’ and ‘BLUE people’.

We need to look in greater depth at that interaction. ‘Life conditions’ needs to be read as the environment and what’s going on in the environment at any given moment of time. So, for example, the ‘jungle’ might include exotic fauna and flora as well as predators; and there will be different types of predator at different times, some more crafty and some more fierce. In the ‘chaos’, there may be pleasure at times and things of intrigue as well as threats and dangers.

So, if there may be a multiplicity of life conditions centred on and encompassing one environment, then, in a healthy individual or healthy group, there will be a multiple vMEME response. Moreover, the life conditions may vary almost by the minute in some contexts, in which case the balance of vMEMES in the vMEME stack will need to adjust accordingly.

To use Gorton’s graphic equaliser analogy, the bands on the equaliser increase and decrease according to what aural electronic stimuli they are receiving. Similarly the strength of the vMEMES in a stack will ebb and flow according to what environmental stimuli is being processed, whether external or internal. 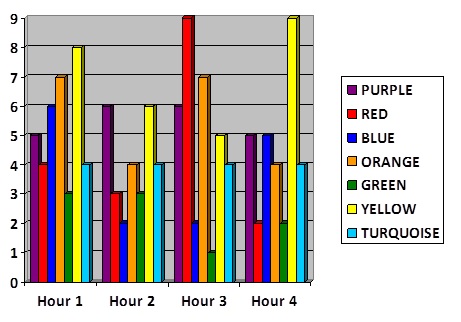 The example on the bar chart left illustrates how this ebbing and flowing can change over relatively short periods of time. Note that, in this instance of a 2nd Tier thinker, YELLOW is stronger in the first and fourth hours, dropping back, especially in the third hour, to allow 1st Tier vMEMES to express themselves. TURQUOISE stays constant throughout, not strong but affecting the balance overall.

Understanding how a vMEME stack can rapidly rebalance helps explain how people can seem to shift their motivations very quickly.

To use a personal anecdote as an example…

When I was a classroom teacher, my RED was often high – both to exert control over the class and to be entertaining. With the schema that m Sixth Form students would learn and understand more if they were enjoying themselves, I would tell dramatic stories about psychologists and sociologists, crack slightly risqué jokes and recount (suitably-censored) counselling & therapy sessions I had undertaken. However, if an authority figure like the head of department or the headteacher walked in, my BLUE would calm me down almost instantly and I would stick much more to the text book or PowerPoint we were using. Effectively I was conforming to what I thought the authority figure’s expectations were.

To avoid reducing vMEMES to ‘types’ of people and to appreciate the immense descriptive and explanatory powers of the Gravesian approach, we need to become more familiar with how vMEMES within a stack can strengthen and weaken in their effect in response to even relatively minor changes in life conditions.