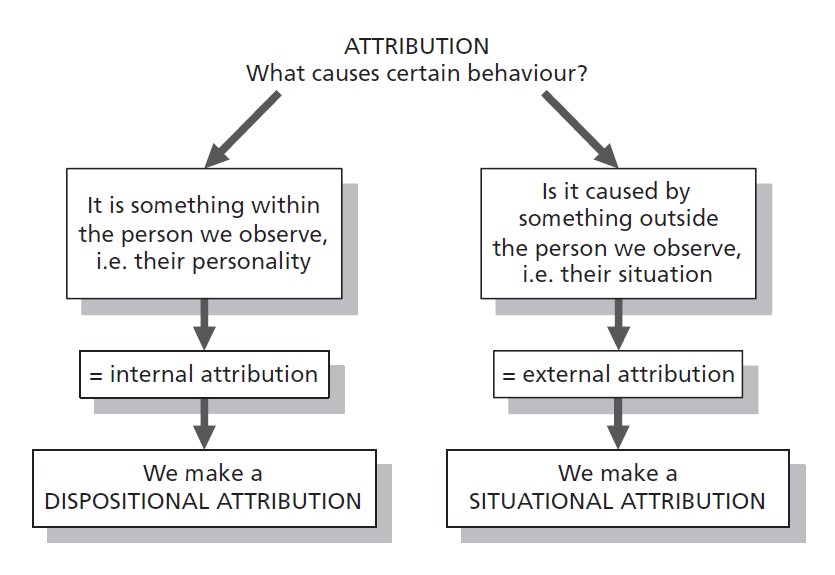 According to Fritz Heider (1958), we produce attributions (beliefs about the causes of behaviour) based on two sources of information…

However, Julian B Rotter (1966) focused on how people attribute the reasons for their own behaviour. From his research, Rotter concluded that people tend to have either:-

Rotter found that, while people do move along a continuum with total internal locus and total external locus at its poles according to life conditions, they do tend overall to attribute one way or the other.

(The concept of locus of control had actually been put forward slightly earlier by Carl Rogers (1961), initially referring to it as ‘locus of evaluation’. Rogers hypothesised the concept from case studies whereas Rotter’s research was based on extensive sample groups, After Rotter published, Humanistic psychologists tended to used the ‘locus of control’ term.)

Since the ‘cool’ vMEMES tend to run externally referenced meta-programmes, they can be said to show an external locus of control; while the ‘warm’ vMEMES tend to internally reference and thus show an internal locus of control. Rotter was convinced from his research that whether someone gravitated towards an internal or external locus was learned as a ‘generalised expectancy’’ from how they experienced repeated successes and/or repeated failures. However, he did also concede that there was an innate temperamental element in the tendency to attribute internally or externally. In terms of Dimensions of Temperament, those with a Choleric disposition and those high in Psychoticism are likely to be more internal while Melancholic temperaments and those low in Psychoticism (Impulse Control) are more likely to be external.

3 Dimensions of Attribution
Bernard Weiner (1979) was also interested in how people attribute success or failure in their own actions. He observed that people tended to explain success or failure by attributing it to one or more of 4 basic causes: ability, effort, task difficulty and luck.

According to Weiner (1979), this produces 8 different explanations for the behaviour – as in the grid below:-

Clearly the development of the model was influenced by the Cognitive Triad which Aaron T Beck had started to publicise. Weiner’s model adds the additional factor of controllability. This provides an extra insight into whether someone attributes dispositionally – ie: it’s within their control – or situationally – ie: it’s not in their control in their locus. However, the attitude to whether the behaviour can be controlled or not will be strongly influenced by the vMEME(s) dominating the selfplex at the time. Attitude towards control may also be affected by temperament – especially in terms of whether someone is high or low in Psychoticism. The basic attribution of either ‘internal’ or ‘external’ is, though, like Heider’s basic Attribution Theory, simplistic when set against attributional style in the Cognitive Triad.

It can be argued that Weiner’s model doesn’t really add anything new but rather isolates and emphasises the perception of control someone has over their situation which is influenced by whether they have an internal or external locus. However, Carol Dweck’s (1975) work with 12 children struggling academically illustrates the benefit of considering controllability as a discreet factor. One group, given only positive feedback, were more likely to give up, blaming lack of ability. However, another group, told they were taking too long and needed to try harder, showed greater persistence and attributed any failures to lack of effort.

Bernard Weiner et al (1971) found that failure may not lower self-esteem if the outcome can be attributed to some uncontrollable external cause such as ‘bad luck’. Weiner et al found that success at one task tends to generate at least a short-term expectancy of success at further tasks whereas failure is likely to produce an expectation of failures to come. These results indicate how Rotter’s ‘generalised expectancy’ develops.

Interestingly Martin Covington (2000) postulated that individuals will come up with attributions that maintain a positive sense of self-worth – effectively RED boosting its self-esteem and avoiding any shame!

Weiner (1992) also found that outcomes from combinations of internal/external locus and controllable/ uncontrollable attributions would induce specific emotions – as set out in the graphic below, adapted initially from the work of Richard Gross (2001). This also allows us to see the effect of the emotion induced by the outcome on the ebb and flow of the vMEMES driving the locus. Essentially the emotion induced by the outcome will strengthen the drive to self-express and weaken the drive to conform or weaken the drive to self-express and strengthen the drive to conform. 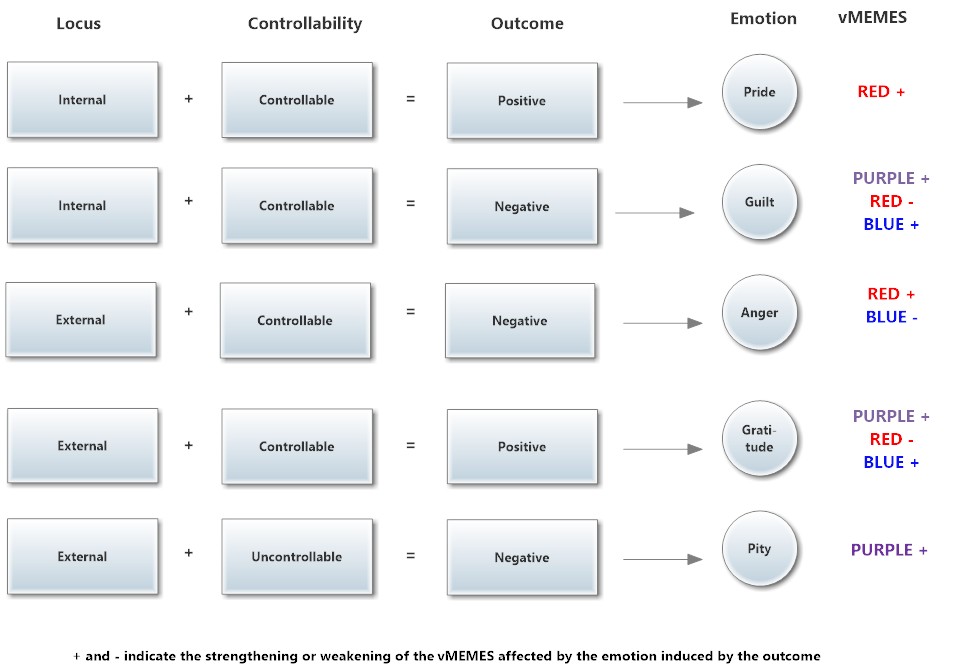 Weiner’s model travels cross-culturally. Beatte Schuster, Friedrich Fosterlung & Bernard Weiner (1989) tested it in Belgium, Germany, India, South Korea and England. All the participants, apart from the Indians, rated 22 proposed causes of someone failing to get a job in terms that equated to locus, stability and controllability. The Indians consistently rated all causes in terms of being more uncontrollable, unstable and external than samples from the other 4 cultures. (The researchers also added a fourth category of universality – does it influence only this or other outcomes – which also figured prominently in explanations of the job seeker’s failure.) 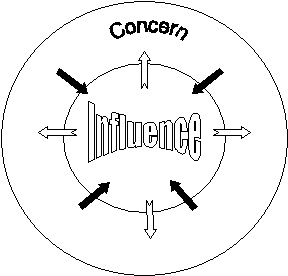 Labelling Theory
Of course, much attribution involves labelling. All humans use labels. For other humans, for animals, for things. It’s part of the way we meta-state to make sense of the world. We attribute about our own person and about other people using labels and we deal – accept, reject, negotiate – the labels other people attribute to us.

Labels that affect us sociopsychologically can be descriptive in a dispositional sense – eg: so-and-so is lazy/clever/generous/mean/etc, etc. They can also be situational – eg: so-and-so has it easy/difficult/a dangerous scenario/a comfortable set-up/etc, etc. They can describe the social roles we acquire or are ascribed to us – eg: lover/ teacher,/criminal/citizen/etc, etc. In whatever way, labels are used, they are shorthand for a set of descriptors and the expectations that all too often accompany the labels.

Labelling can be appreciative – eg: “She’s beautiful” – or denigrating – eg: “He’s a real misery”. Sociologists and psychologists exploring Labeling Theory usually tend to focus on the negative problems caused by labelling. Particular areas of concern include the effect of labelling with regard to mental illness and the often-unintended consequence of deviancy amplification when labelling deviants and criminals. Unfortunately, by this focus, they often miss out on the very positive potentials of labelling.

Labelling inevitably affects the thoughts and behaviour of those who attribute those labels as well as those who are labelled. Acceptance of labels about others can also influence thoughts and behaviours towards them. Albert Bandura, Bill Underwood & Michael Fromson (1975) demonstrated this in a Milgram-type ‘electric shock’ experiment. Participants who ‘overheard’ the researcher referring to the ‘victims’ as ‘animals’ delivered higher shocks than those who heard the researcher refer to them as ‘nice’.

To relate labelling to Weiner’s modelling, how others project the factor of controllability onto someone’s behaviour in a situation can have considerable influence on how they label and then behave towards that person. For example, M Cobb & J T de Chabert (2002), looked at attribution amongst 46 providers of social-services working directly with people affected by HIV/AIDS. When asked to read a hypothetical scenario depicting someone at risk of contacting HIV/AIDS due to multiple high-risk behaviours, participants who perceived individuals to be more responsible for their illness, reported increased anger, attributed more blame and expressed less willingness to help those at risk.

Being labelled can seriously affect the labelled person if they accept the label. This can lead to a self-fulfilling prophecy. One example of this is Stephanie Madon et al’s (2003) longitudinal study into the relationship between mother’s expectations of their children’s future underage drinking. They found a .48 correlation between the mother’s expectation and the child’s use of alcohol. However, although they did control for variables such as family norms and social class, the researchers could not claim as they found self-esteem to be a moderating factor, indicating the RED vMEME played a confounding role.

A fascinating example of label negotiation comes from Albert Reiss’ (1961) study of young male prostitutes who regarded having sex with other men purely as ‘work’. In their personal lives, they maintained an image of themselves as non- homosexual.