The Meta-States model of L Michael Hall (1995) and the Cognitive Psychology concepts of Cognitive Labelling Theory and the Cognitive Triad naturally complement each other in providing insight and understanding as to how beliefs and belief structures are formed. However, the models do need to be linked to provide the fuller picture.

The linking mechanism is provided by the vMEMES of the Gravesian approach. For some people, their temperamental Dimensions of Temperament may also be of importance. 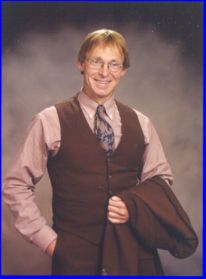 When he first publicised the Meta-States concept in 1994, Michael Hall pretty much took the world of NLP by storm. Meta-stating, more than anything before that had gone before, provided a structure for understanding how belief systems built up – either positively or negatively.

In the Meta-States concept, we take in information from our 5 senses. This produces a ‘primary state’. Most people then apply meaning to the primary state – they interpret what that means – producing a first level meta-state. Carl Gustav Jung (1921) called people who don’t apply an interpretation ‘sensors’; those who interpret – most people! -are ‘intuitors’. The process of interpretation (or meta-stating) of the primary state to produce the first level meta-state is best understood through the Cognitive Labelling Theory of Stanley Schachter & Jerome Singer (1962). According to this, we can have quite different cognitive interpretations of the same set of physiological symptoms. Eg: the physiological symptoms of acute fear – fast breathing, pumping heart, pounding temples, dry mouth, tight stomach, etc – can be very similar to those in the build-up to intense sexual excitement. What makes the difference is the basic meaning we apply to the raw physiological state – ie: fear or excitement.

The example in the graphic below shows a man creating a chain of meta-states from the simple primary state of awareness of the woman not looking at him. 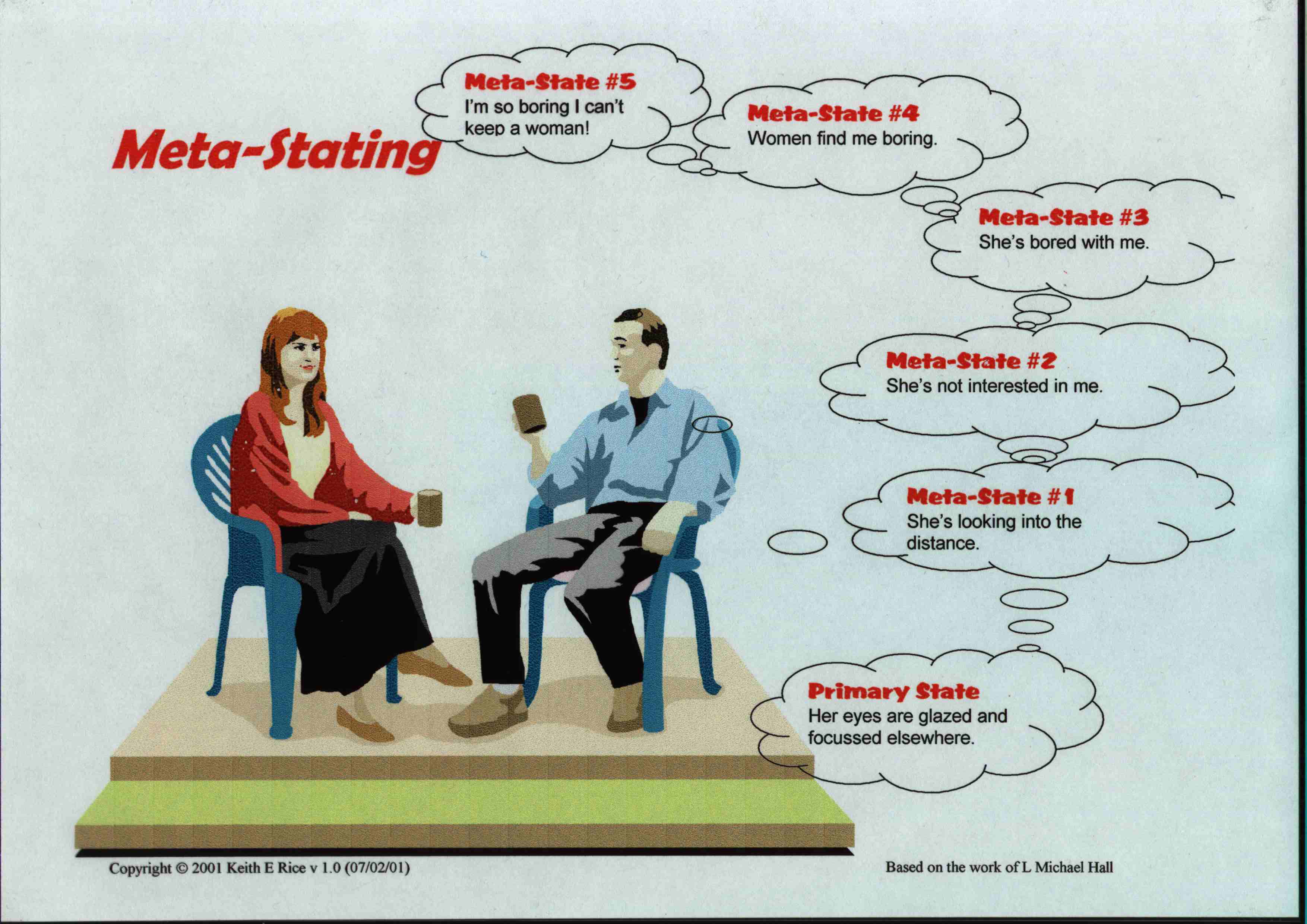 Belief systems can be either healthy or unhealthy – in that they enable people to cope successfully with life (healthy) or else inhibit people from leading fulfilling lives (unhealthy). Unhealthy beliefs about self or others can lead to the development of attribution biases.  Examining and understanding your own mental processes in this way is a form of what Wilhelm Wundt (1879) is called introspection.

Michael Hall and a number of other leading NLPers have devised therapeutic strategies for undermining and collapsing unhelpful meta-states and building enabling chains of meta-states. 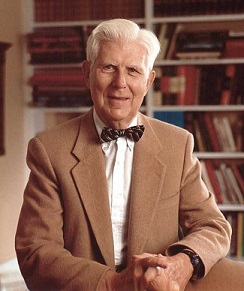 The Cognitive Triad
Although it is more commonly associated with Aaron T Beck et al (1979), the Cognitive Triad was first brought to life by the work of Lyn Abramson, Martin E P Seligman & John Teasdale (1978).

Abramson, Seligman & Teasdale developed their ideas from studying people who were overwhelmed by their problems and felt helpless to improve their lot – a condition Seligman (J B Overmeier & Martin Seligman,1967; D S Hiroto & Martin E P Seligman, 1975) had earlier characterised as learned helplessness. They identified that people tend to either:-

This is represented in the graphic below:- 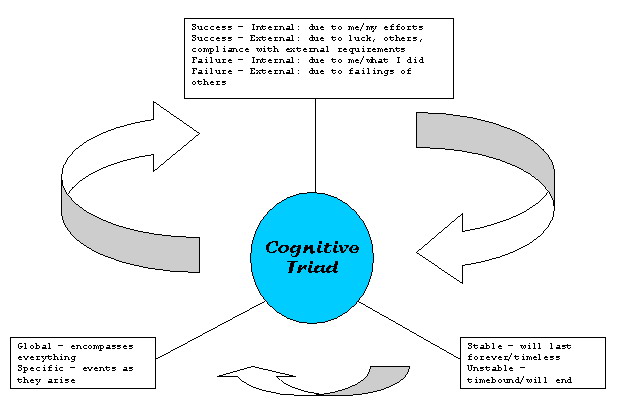 It was Aaron Beck who popularised the Cognitive Triad as a means of analysing depressive schemas. A Failure Internal/Timeless/Global attribution creates a cognitive diathesis in the diathesis-stress equation, making the attributor vulnerable to Depression. Someone with a Success Internal, Failure External/Timebound/Specific attributional style is more likely to believe both in their own ability to succeed (self-efficacy) and their likelihood of success.

Beck has spent much of his working life devising interventions to correct maladaptive schemas. His work has helped hundreds of thousands deal with Depression and been foundational to the development of Cognitive-Behavioural Therapy.

However, what Beck calls a depressive or maladaptive schema is, in Michael Hall’s language, the outcome of an unhelpful meta-stating pattern. The very act of attribution moves the level of experience upwards in the meta-stating process. 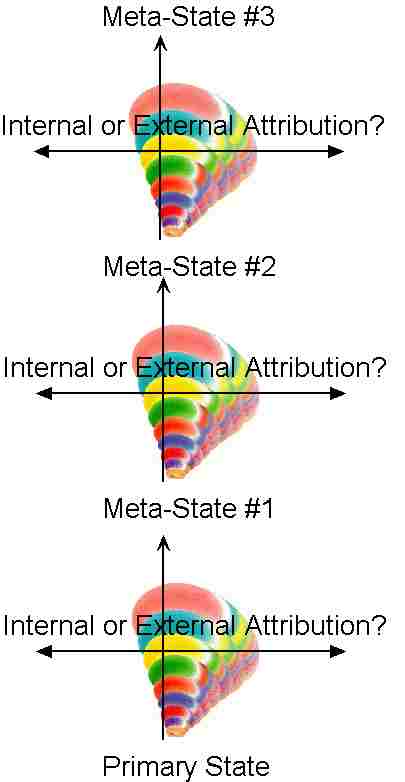 To understand how this structuring of consciousness takes place – Wundt’s stucturalism – we need to consider the attributional style of the dominant vMEME as the new meta-state is formed. An individual’s vMEMETIC style of attribution may also be influenced by their Dimensions of Temperament.

For example, RED will attribute success to its own efforts and blame others for its failures. BLUE, on the other hand, will blame itself, leading to guilt and depressive thoughts dominating the selfplex) – eg: for not conforming or obeying – when things go wrong and attribute success to external factors – eg: there being norms and rules to conform to and obey.

So whether we meta-state in an unhealthy or an enabling manner will be influenced by the attributional style of the vMEME most dominant in our thinking. Of course, vMEMES inevitably skew our perception of reality in the creation of meta-states and bias the way we attribute. and this can lead to attribution biases.

There is some evidence in the work of Julian B Rotter (1966) on locus of control that attributional style has an innate temperamental element to it: some people attribute one way or the other throughout life, regardless of circumstance. Interestingly the work of Rotter’s contemporaries Jerry Phares, Elaine Ritchie & William Davis (1968) suggests that people with a Melancholic disposition are much more likely to meta-state negatively about themselves.

However, Beck (1967; 1976), a psychoanalyst originally, thought that childhood experiences significantly influenced attributional patterns – ie: the way we attribute cause for success and failure either dispositionally or situationally. Eg: someone frequently criticised for making mistakes is likely, in the future, to attribute failure dispositionally; someone who is praised for following the rules is likely to attribute success externally. (This is seen in Erik Erikson’s (1959) theory of Psychosocial Development  in which the crisis of the Latent stage is that of competence – and whether the child showing initiative is perceived both by self and others as successful or unsuccessful.)

It may also be that the Timeless/Timebound element of the Cognitive Triad is influenced by vMEMES as well. For example, RED has no real concept of time especially if fuelled by the impulsiveness of Psychoticism. However, BLUE – running a Move Away From meta-programme – is concerned with what could go wrong in the future.

So, if we wish to facilitate the unravelling of disabling meta-states and enable positive meta-stating processes, one way is to change the vMEME pattern in the Cognitive Triad at one or more levels – the closer to the relative reality of the primary state so we are sensing rather than intuiting, to use Jung’s terms, usually the better! By doing this, we are much more likely to create healthy frames of reference for meta-stating processes.

The influence of vMEMES and temperament in the formation of unhealthy meta-states is discussed further in the Mental Health feature, Can vMEMES cause Clinical Depression…?