According to Muzafer, when a potential issue of conflict arises, people – individual or group – approach it with one of 3 ‘latitudes’:-

The key to which latitude information fell into would depend on the level of ego investment – ie: how important the issue was to you personally and how committed to it you were. In other words, how much your sense of self-esteem was involved – clearly the domain of the RED vMEME.

Muzafer found that working in the Latitude of Acceptance led to what he called an ‘assimilation effect’ – ie: you will find to some degree acceptable information that is not really that close to what you believe. On the other hand, when working in the Latitude of Rejection, there is a ‘contrast effect’ – ie: you find unacceptable even information that is fairly close to what you believe.

Don Beck (2003), who had studied under Muzafer and was closely involved in the work from which Social Judgement Theory was developed, realised, from his ongoing work in conflict situations like Apartheid South Africa, that the level of ego involvement in any particular issue would be influenced significantly by which vMEMES were driving the key players. How much value someone attached to an issue would depend on the memes they had been infected with and the active strength of the vMEME the value related to.

Not only do some vMEMES tend to a contrast effect while others tend to an assimilation effect, but this can even be mapped to vMEME transition states. Indeed the moment when contrast starts to give way to assimilation appears to occur with the transition from BLUE to ORANGE. 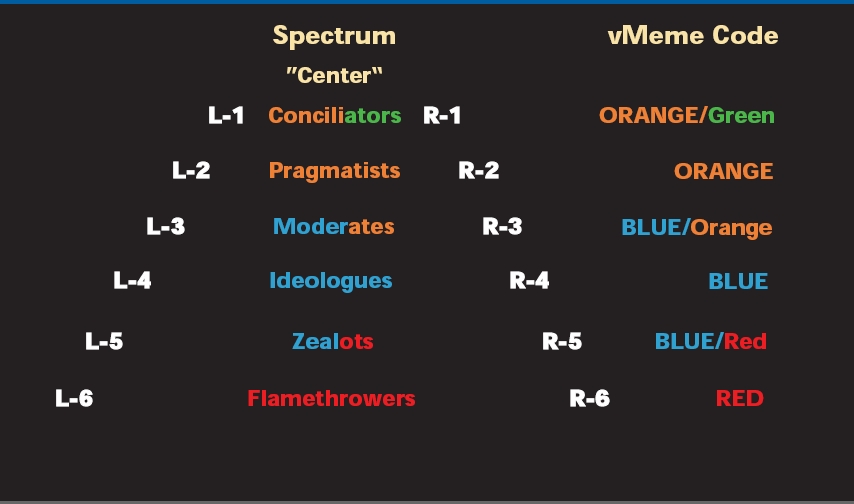 At one extreme RED has a ‘my way or the highway’ approach to any dissident information – thus classifying close-but-not-totally-agreed allies on a similar level to outright opponents. At the other extreme the emergence of GREEN leads to a search for a liveable-with consensus – though it is the emergence of ORANGE, with its tendency to pragmatism, that first investigates something other than win-lose.

Of course, there is the caveat that GREEN can flip totally if the information it receives is implacably opposed to its values such as egalitarianism and humanity. In which case, you are much more likely to see BLUE or possibly even RED replace its dominance in the vMEME stack you are dealing with!

For validation purposes, it should be noted that the descriptions Beck attaches to his styles match very closely to the conflict management styles identified by Robert Blake & Jane Mouton in their seminal work 1964 on the subject – their work being largely verified by the work of Ken Thomas & Ralph Kilmann (1977).

As he was drawing primarily from matching Clare W Graves’ research to his own experiences, Beck’s work does not describe how the Assimilation-Contrast Effect affects PURPLE or nodal GREEN. However, from the work of Blake & Mouton and Thomas & Kilmann, it is possible to classify:-

The caveat in all these matches is that Blake & Mouton and Thomas & Kilmann are describing behavioural outputs while Beck is drawing on Graves’ motivational systems.

When it comes to 2nd Tier, Beck seems to see no need to talk of the Assimilation-Contrast Effect. However, it is worth noting that Blake & Mouton see the most desirable-but-difficult-to-achieve style as Sound (Contribute & Commit) and Thomas & Kilmann see it as Collaboration. While it is difficult to be precise because there is so little reliable information about the 8th vMEME, it would appear that Blake & Mouton and Thomas & Kilmann are talking about behaviour that is perhaps better ascribed to TURQUOISE than to YELLOW. In any case, it is abundantly clear that attitudes towards issues are quite different in the 2nd Tier where, according to both Graves and Abraham Maslow, the delusions and temperamental limitations of the subsistence/deficiency ways of thinking drop away.

Returning to Muzafer Sherif’s original proposition, it is possible to see that, under normal-ish (as opposed to extreme) circumstances, RED and BLUE might be substantially prone to ego involvement – RED because it is focussed on self-expression while BLUE invests ‘self’ completely in the mythical ‘higher authority’ and, therefore, cannot brook any challenge to that investment. In contrast ORANGE is more capable of considering a wider range of views while GREEN’s concerns reach far beyond ‘self’.

The notion that people are more reasonable the higher up the Spiral their thinking is, was foreshadowed by Else Frenkel-Brunswik (1951), drawing on her work with Theodore Adorno (Adorno et al, 1950). She noted that prejudice declined with progress past a certain point on a Gravesian-like hierarchy of attitudes towards prejudice. (See Comparison Map.)