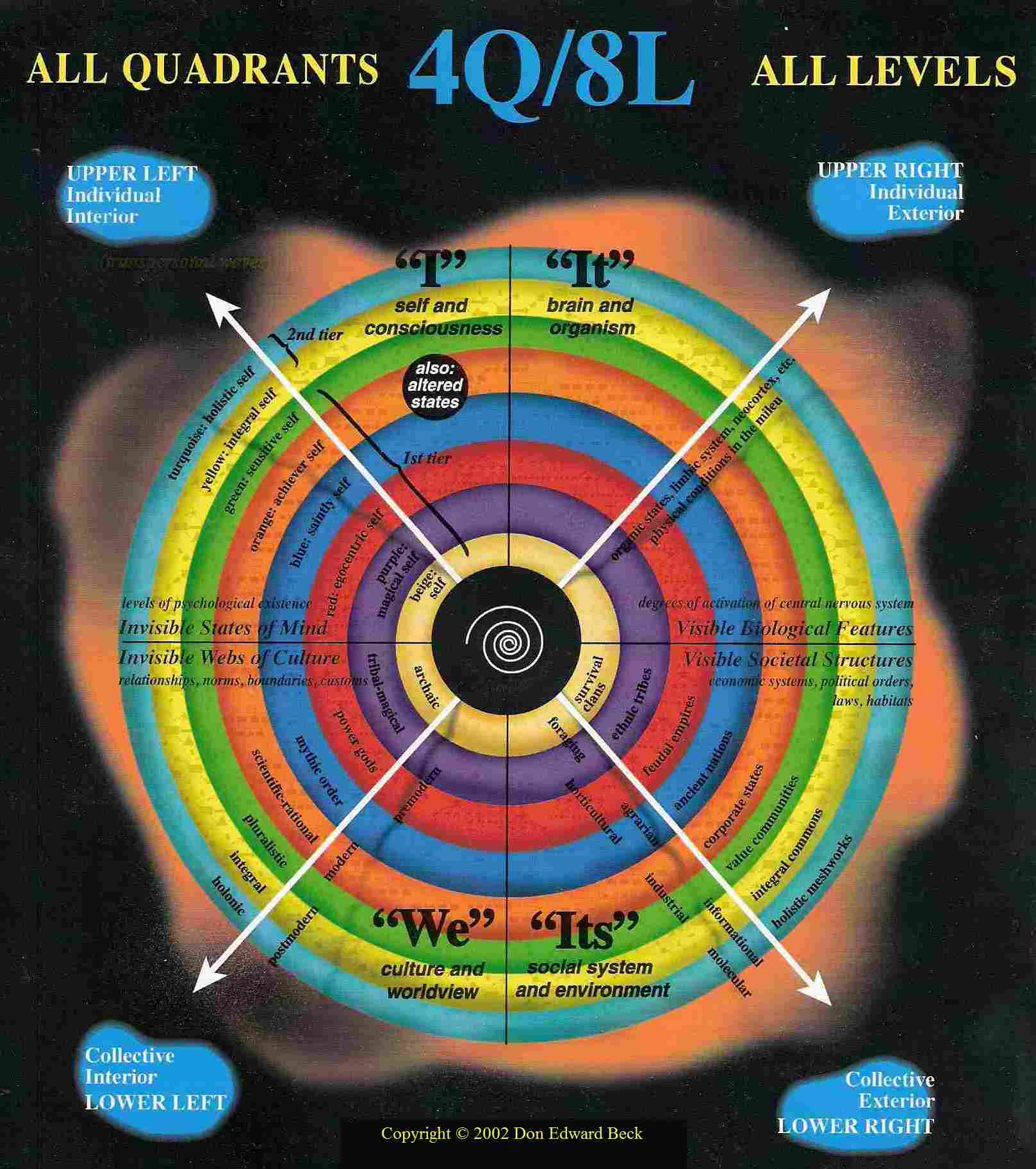 It was in 1996 that Ken Wilber, arguably America’s leading contemporary philosopher, first made public his notion of All Quadrants/All Levels (AQ/AL). It was a heroic attempt to create a grand overarching theory of human experience, motivation and interaction, based on the intersection of two key dimensions: Tangible-Intangible (or Objective-Subjective) and Individual vs Collective. This created quadrants of :-

All ‘lines’ – eg: social, cognitive, emotional, spiritual, etc – and levels or stages of development in whatever domain can, in Wilber’s paradigm – be run through at least one of the quadrants, The AQ/AL concept has been – and undoubtedly will continue to be! – profoundly influential in explaining many aspects of the ‘human condition’. (For further information on the basic model, see Peter McNab’s Article, Aligning Neurological Levels – a Reassesment (1999).)

Don Beck’s genius, when he and Wilber began collaborating in the late 1990s, was to create 4 Quadrants/8 Levels (4Q/8L) (2000b, 2002b) by running the vMEMES of the Gravesian approach/Spiral Dynamics/Spiral Dynamics Integral (SDi) through the Upper Left, Lower Left and Lower Right Quadrants. The Bio(Upper Right)-Psycho(Upper Left)-Social(Lower Quadrants) scope of Clare W Graves’ research – on which the Gravesian approach is built – makes it a natural fit.

The interconnectedness of the 4 quadrants displayed in 4Q/8Lmakes it an invaluable tool for carrying out a MeshWORK analysis. (Interestingly, using the basic concepts of the Beck-Wilber original, Gernia Van Niekerk has produced The Gernia Variation, a more action-oriented version of 4Q/8L for designing a MeshWORK.)

The Upper Right Quadrant Beck sees as the individual’s organic capacity to develop the vMEMES of the Upper Left Quadrant and act out (behaviour) their instructions. This is determined by internal neurobiological developments –  influenced by neurotransmitters and hormones, as shown in the enhanced graphic below. Upper Right capacity to form healthy functional vMEMES is also influenced strongly by factors such as nutrition and environmental pollutants and contaminates. (Beck (2002a) has put great emphasis on the need to ensure that what goes into our bodies will contribute towards healthy development of the brain.) This effectively creates a bridge between Neuroscience (investigations of the brain and central nervous system) and the thoughts, attitudes, values, beliefs and memories we call ‘mind’ which Psychology is concerned with. While it doesn’t resolve the issue of Dualism, it at least gives us a workable paradigm for how the mind and body interact. 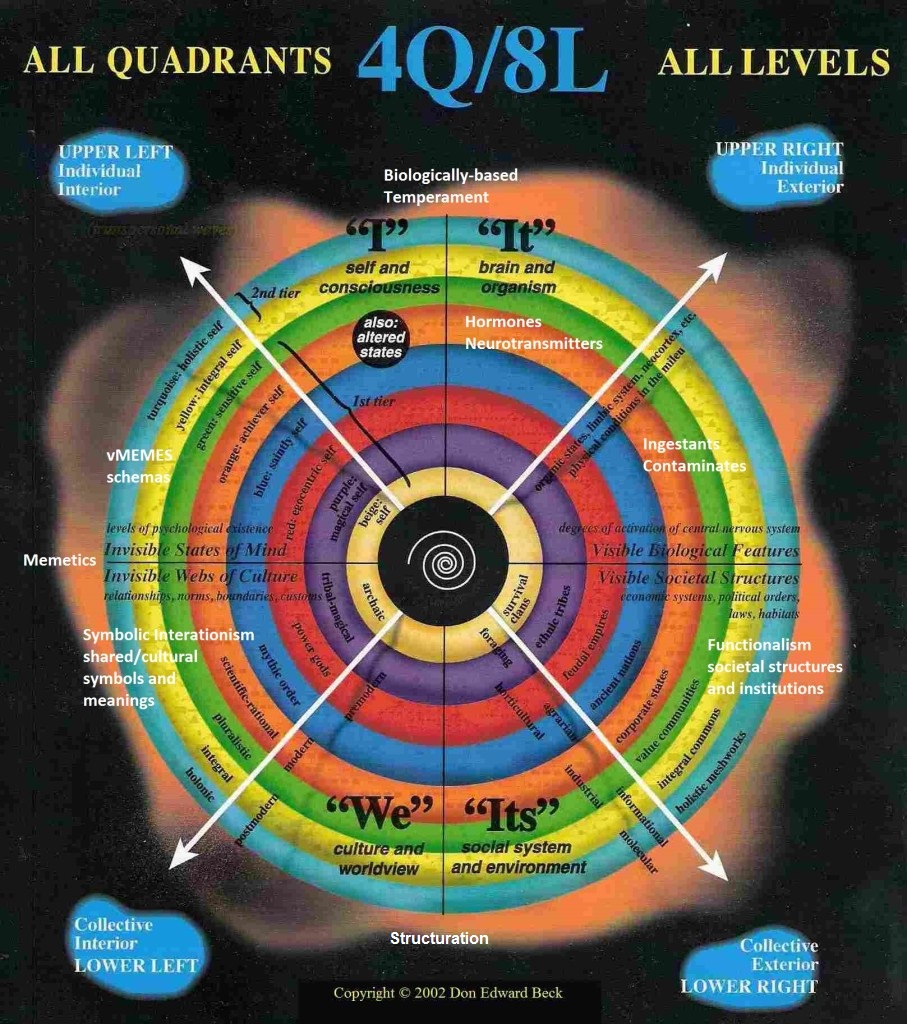 It perfectly complements Reciprocal Determinism in considering how an individual’s attitudes and behaviour (Upper Quadrants) impact upon the environment (Lower Quadrants), change which then impacts back upon the individual. It also expands the concept of the Environment in the Neurological Levels construct to enable differentiated analysis of culture and the institutional structure(s) in which culture is enacted.

The biology of the Upper Right is also responsible for another psychological effect: the Dimensions of Temperament – though increasingly Epigenetics is showing the environment can influence the way the biological foundations for temperament work.

Schemas are formed and re-formed in the Upper Left through the interaction of vMEMES and external memes. Memes also infect groups as well as individuals and thus have a profound effect on the way culture develops in the Lower Left. This makes Symbolic Interactionism an appropriate way to explore how meanings are constructed via group dynamics and interactions in cultural contexts.

Both individuals and groups have to operate within the structures of the Lower Right. Thus, the frame of 4Q/8L enables us to look at the Lower Right and Left Quadrants in a way that sees Functionalism (emphasis on the functions of social institutions) and Symbolic Interactionism (emphasis on cultural meanings) as providing complementary insights, rather than being competing schools of Sociology.  In this effect, Beck builds on the work of Jűrgen Habermas (1962) in bringing together such sociological theories as those of Max Weber, Émile Durkheim and George Herbert Mead .

The way Beck describes the interaction between the Lower Left and the Lower Right also very much accords with  Anthony Giddens’ Structuration Theory (1984). For Giddens, culture (Lower Left) cannot exist independent of some sort of structure (Lower Right) but the structure is dependent on the culture for its maintenance and development. A change in attitudes in the Lower Left may result in change of the structure. Moreover, change in the Lower Left  often begins with individual thoughts (schemas) in the Upper Left expressed as memes to initiate that process of change – the role of the social hero in Social Change. However, equally change in the Lower Right structure can impose change o in the Lower Left which then may bring about change in individuals (Upper Left). One example of this is the way drink-drive laws (Lower Right) have gradually become the cultural norm (Lower Left) to inhibit individuals (Upper Left) from breaking that law; individuals then pressurise their networks and friendship groups to comply with the law. This illustrates the holistic connectedness of 4Q/8L.

As the precepts of Symbolic Interactionism reach over into the Upper Left to show the effects of symbolism on individuals through memes, then the somewhat artificial barriers between the behavioural sciences are rendered ineffective. (Which is largely how they were seen by Graves.)

Thus, 4Q/8L enables us to see why, for example, a literature-driven ISO 9000-type quality system (BLUE, Lower Right) will have little impact upon a largely manual, unskilled traditional workforce (PURPLE, Lower Left) who place no great value on literacy. (See The SME Spiral for an in-depth exploration of this example.)

Equally we can see why a teenager operating in heavy RED (Upper Left) would have ongoing conflict with the BLUE rules of a school system (Lower Right) – quite possibly compounded by a GREEN culture (Lower Left) of tolerance of expression amongst the teachers.

Just from 2 such examples, it is clear just how much 4Q/8L provides the overarching framework on which Integrated SocioPsychology is being built!