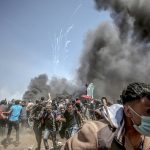 by Dave Lowe As the country reels from the London bombings, I received this thought-provoking message from Dave Lowe, a graphics artist and trainee counsellor in Hull. Dave wants it put up for public discussion. So here goes… I listened to Bush on the news and yet again he said “We will find the perpetrators of these terrible acts.” Does that guy have any idea that it’s not about 10, 100, 1,000 guys with olive skin trying to blow up some folks on a bus?! Bush sees only goodies & baddies in his singular ORANGE view. There are very different thought and value structures in different parts of the planet. All Bush sees is the free individual acting for his/her rights, being attacked.( ORANGE in the US, orange/GREEN in Europe). He sees the attackers as the same as him, just with darker skin. How wrong he and Blair have been has been recently shown when they have tried to present the people of Iraq with the freedom to choose a multi-party democracy (just like the one at home) – and they didn’t want it. Offering GREEN values to a BLUE society that is in RED turmoil ! Bush does not see that the Arab and Muslim… Read More