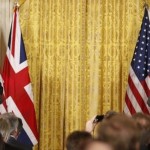 On a walk this morning I was surprised to see a National Front (NF) sticker on a post box proclaiming ‘No more mosques!’ (The design was identical to the flag above .) Firstly I didn’t even know the National Front were still going – I thought they were long ago eclipsed by the British National Party (BNP). Apparently the NF are still in some kind of business – though they seem to be riven by the most egomaniacal RED-driven in-fighting! Check out http://www.national-front.org.uk/ to view their sorry state. Secondly I was surprised to see the sticker in the Greengates part of Bradford, close to where I live. While there was some trouble in the area at the time of the 2001 ‘race riots’, Greengates appears to have little or no racial tension.  It is a largely mixed area of lower middle class and upper working class. The population appears to be mostly white – though there are a number of Asians living in and around the area – as evidenced by the wide array of clothing and skin colours to be seen in the Greengates Sainsbury’s.  Everything from shorts and vests to shalwar kameez and even full burkas can be found in the supermarket… Read More

Of course, you can find a steady drip of news from Syria if you look for it; but there haven’t been that many front page headlines about the Syrian conflict since the US stepped back from the brink of a missile attack in the Summer. Under tentative Russian protection, the Syrian Government appears to have co-operated fully with the United Nations weapons inspectors who are reported to be making good progress (BBC News, 2013b) While no one should underestimate how dangerous the inspectors’ task is – and they haven’t yet been able to access some sites which are in highly-contested areas – their success has been without the kind of nightmare casualties I envisaged in Putin a 2nd Tier Thinker. (The BBC’s Jonathan Marcus (2013b) was just one expert who foresaw similar scenarios.) So far the weapons inspectors have done remarkably well, the Syrian Government is credited with meeting its obligations to the UN Security Council and Vladimir Putin with getting them to do that…and the world has breathed a collective sigh of relief. Given the commercial media’s RED/ORANGE rapacious appetite for new and exciting events to draw in the audience, it’s not too surprising the media’s attention has largely gone elsewhere.… Read More

A Message for Tony Blair?

Well, Gordon Brown certainly had an ‘interesting’ introduction to his new life as Prime Minister of the United Kingdom. 3 British troops killed in Iraq on Thursday 28 June (the day after his assumption of power), 2 car bomb plots somewhat miraculously foiled in London in the early hours of Friday 29th and the dramatic Cherokee Jeep bomb attack on Glasgow Airport Saturday afternoon (30th). British troops are being killed or injured in Iraq now on a fairly regular basis; so there may or may not be any significance in the timing of the Basra roadside bombing. But there is much speculation about the supposedly-linked London and Glasgow attacks and what their meaning might be. A number of commentators are of the view that the car bombs are some kind of message from al-Qaeda to Gordon Brown. Quite what that ‘mesage’ might be is harder to fathom – especially since there has yet to be any kind of statement from a recognised agent of the terrorist network. Nor has there been any indication so far that the police have relevant information on either motive or instigating source from the suspects they are interrogating. Certainly Brown has signalled that ‘change’ is going to be his motif… Read More