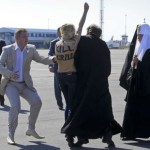 You might have missed it in all the intense media coverage of Margaret Thatcher’s death this Monday but 5 FEMEN activists sure upset Vladimir Putin on his visit with Angela Merkel to an industrial fair in Hanover. With “Fuck you, dictator!” scrawled across their bare breasts, they chanted the same slogan as they rushed at him – only to be bundled away by the security men. Although he claimed afterwards to have been amused by the protest, according to the leader of the protest, Inna Shevchenko, writing in The Guardian 2 days later, the Russian president was furious and demanded the Germans prosecute the protestors. What a great excuse FEMEN provide to feature a picture of an attractive woman with bare breasts on my Blog – all in the name of serious sociopsychological commentary! What a great excuse for the tabloids – including those who have supposedly turned their back on Page 3 girls – to include pictures of pretty topless women in their news pages! FEMEN, the radical Feminist group who have staged topless protests at key events, including a mass by Pope Benedict in November 2011, Euro 2012 and the London Olympics, have certainly gained considerable coverage in the… Read More