PART 4
Defining behaviour as crime
Picking up from Sutherland’s 9th principle – also discussed earlier when exploring the work of Bonger and considered in Crime & Deviance – the Difference – who decides what is criminal and what is deviant is no simple matter. Nor are there absolute definitions as even Functionalists argue definitions can change over time and between cultures.

In the Interactionist view laws are, to all intents and purposes, political products that reflect the power of some groups to impose on others their memes of right and wrong and normality. Thus, Anthony Giddens (1993, p128) writes: “The labels applied to create categories of deviance thus express the power structures of society.”

This goes beyond the Marxist view that the social control is about Capitalists using the law to control the working classes.  Howard Becker’s (1963) application of Labelling Theory to crime and deviance posits that, rather than a fixed scenario of the Capitalists dictating values that reflect their interests in society and are enforced via the legal system, in fact politics is a competition between different groups to gain the power to impose their values on others. Routes to such power obviously include legislative institutions such as Parliament but also pressure groups of various kinds and, of course, the media.

Becker argues that those who campaign to establish the dominance of their values are ‘moral entrepreneurs’ running ‘moral crusades’. They seek to outlaw the behaviours they consider deviant at best and criminal at worst. Often politicians, newspaper editors and/or religious leaders will create what Stanley Cohen (1972; 1980) calls a moral panic, in which the threat element is emphasised and more than likely exaggerated.

The process is set out in the graphic below, adapted from the work of Stephen Moore, Steve Chapman & Dave Aiken (2009):-

Successful creation of a moral panic usually scapegoating some group within society – often some minority group – as being the threat causing the moral panic. Cohen calls such group folk devils as dangerous and threatening powers are attributed to them much greater than they could possibly have in reality.

The graphic below, again based on the work of Moore, Chapman & Aiken, shows how responses at various stages to media provocation are critical to the successful creation of a moral panic and the effective labelling and consequent stigmatisation of the appropriate folk devils. 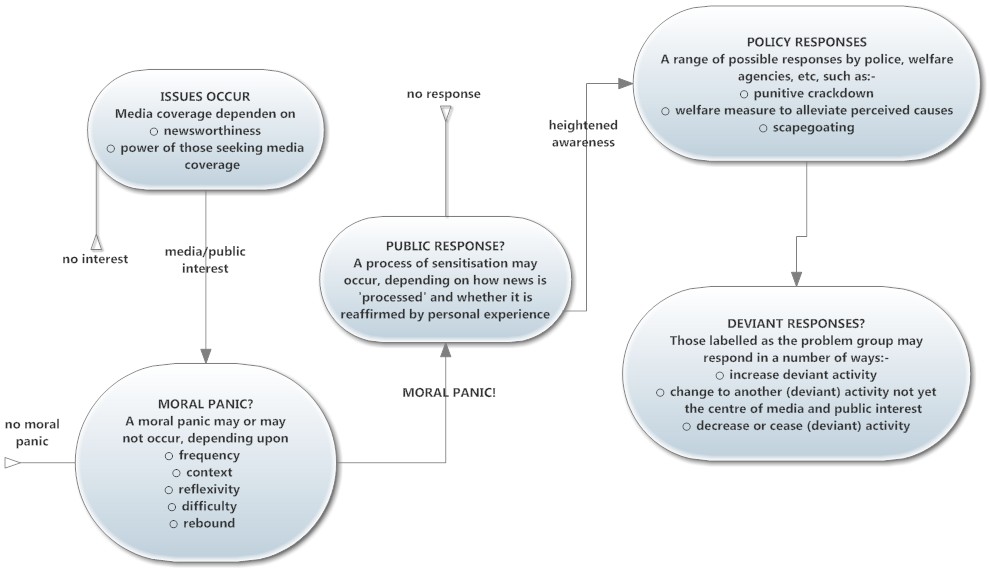 A potent and repeating example of a moral panic is the media’s recurring obsession with drug-related gang violence and the association of young black men with such behaviours – a form of racism. Young male blacks get ‘stopped and searched’ more than any other group This is demonstrated repeatedly by British Crime Survey statistics. Research shows that this is a result of police officers’ beliefs that this particular social group is more likely to offend. Because of this young black males are stopped and searched as subjects of ‘routine suspicion’. However, British Crime Survey statistics also show that young black males are disproportionately responsible for crimes in their areas, ranging from burglary and pimping to grievous bodily harm and murder.

Aaron Cicourel (1968) looked at how young people fared when encountering the criminal justice system. He found that police officers were much more likely to search and arrest people who fitted their criminal stereotypes of delinquents – usually young working class males (especially blacks). They also spent more time patrolling areas where such people lived more. By contrast he found that middle class youths were more likely to be “counselled, warned and released” rather than prosecuted. Cicourel even found that probation officers were swayed by stereotypes, believing juvenile delinquency was caused by ‘broken homes’, poverty and poor parenting.

So how do such negative stereotypes affect the groups labelled as folk devils? Do police stop and search actions aggravate disaffection and alienation amongst young black males and thus make them more likely to commit ‘criminal offences’ – thus creating a self-fulfilling prophecy? This leads to what Cohen calls deviancy amplification – ie: the deviance is increased/made greater.

Deviancy Amplification
As noted by Moore, Chapman & Aiken above, there is the issue of how much the folk devils accept the deviant label thrust upon them by the moral entrepreneurs.

Becker talks of negotiating deviant labels – choosing how much to accept, when and in what way to accept – or to reject – deviant labels. In other woods, there can be deliberation and intention in taking on of the self-image – identity – of the deviant.

Albert Reiss (1961) provides an interesting example of this. Reiss studied young male prostitutes who regarded having sex with other men purely as ‘work’. In their personal lives, they maintained an image of themselves as non-homosexual. In other words, they perceived themselves as straight.

Choosing when to be deviant and when not to avoids developing a truly deviant identity, according to David Matza (1964) Matza uses the example of juvenile delinquents who rarely become career criminals because most juveniles drift back and forth between deviant and conformist behaviour without ever becoming committed to delinquency as a way of life. Thus, even though they may engage periodically in deviant behaviour, they do not develop the identity of ‘deviant’.

According to Leslie Wilkins (1964), when acts are labelled ‘deviant’, the ‘deviants’ become stigmatised and cut off from the mainstream society. They become aware that they are regarded as deviants and so, as a self-fulfilling prophecy, start to develop their own sub-culture. This leads to more negative attention and more intense pressure on them and further isolation…which further confirms and strengthens them in their deviance.
Edwin Schur (1971) refers to those who are stigmatised finding that their lives and identities come to be organised around their deviance. This may involve an acceptance of the negative stereotypes that others hold of their deviance. Consequently labels become more firmly fixed and the ‘deviants’ more attached to them. To a considerable extent this illustrates Social Identity Theory, with the deviants building their identity as the in-group (Social Identification) and trying to outwit the police and other out-groups (Social Comparison).

It also fits with Robert Dilts (1990) Neurological Levels model. Once the Identity of ‘deviant drug-taker’ is accepted and internalised – a form of informational influence – this strongly influences the Values & Beliefs the person has about themselves, others like them and the outer world beyond their groupings. They work on strengthening existing skills and acquiring new techniques (Skills & Knowledge) to carry out the Behaviour expected of such an Identity – again a self-fulfillng prophecy! The Environment is likely to be suitable for the Identity accepted – eg: a communal squat.

The more the folk devil deviants are scapegoated and othered (Gayatri Chakravorty Spivak, 1985), the more unsafe they will feel and the more they will band together driven by the PURPLE vMEME’s need for safety-in-belonging. Inevitably their tribalism will lead them to other those who are not like them – thus, exacerbating their alienation from the mainstream and amplifying their deviance.

The consequences of such processes are illustrated by Jock Young’s (1971) study of drug use in North London, Young showed that police activity led to drug use being ‘driven underground’. This isolated users into a drug sub-culture, with “a distinctive style of dress, lack of workaday sense of time, money, rationality and rewards.” This, in turn, made it difficult for them to find legitimate work which, in turn, made it difficult for them to afford the drugs. The scarcity of drugs drove up the prices and this drew in professional criminals who saw the profit in organising the illicit drug business. Criminal rings developed and the competition between them led to violence. It also led to the use of dangerous substitutes and adulterants in drugs by suppliers only interested in maximising their profit. This meant that users were unable to gauge the strength of the drugs and, consequently, they were more likely to overdose. Such criminal involvement in the drugs business, combined with a rise in deaths through overdoses – often described in lurid detail in the media, caused wide public concern.
In response to this, police officers intensified their clampdown even further – thus accelerating the ‘amplication process’.

Anthony Liazos (1972) actually criticises Labelling theorists for simply exploring marginally-deviant activities. His argument is that, by doing so, they are reinforcing the idea of pimps, prostitutes and mentally ill people being deviant.

Biological or sociopsychological factors…?
Clearly biological factors can predispose someone to criminal activity – particularly violence. However, it is only in very rare cases that criminal violence can be ascribed primarily to purely biological factors. One such example may be Hans Brunner et al’s 1993 study of a Dutch family from Nijmegen who all demonstrated  abnormal aggressive and murderous behaviour. Even then it can be argued there were often sociopsychological triggers to the individual explosions of violence. Even in the case of Charles Whitman, whose 1966 shootings of 48 people (including 16 fatalities) were attributed to a tumour on his amygdala (discovered at autopsy), there were severe stressors in his life (Mariee,Macleod, 2012)

But biological factors such as where someone is on the Dimensions of Temperament or having a paucity of mirror neurons will undoubtedly contribute in many cases.

Likewise identifying which of the sociological and psychological factors reviewed in this article is most important as a cause of crime is equally difficult. As with biology, social and psychological drivers will vary from case to case. What such reviews do afford us is both greater understanding by applying these concepts and opportunities to rectify at least some of the problems that contribute to crime and deviance.