Samuel Yochelson & Stanton Samenow (1976) certainly thought so. They studied 255 male participants from various backgrounds – eg: black and white, wealthy and poor, inner city and suburbs – over a 14-year period. With regard to the participants, the ‘studied offenders’ were criminals sent to secure mental hospitals because the court had accepted their pleas of ‘diminished responsibility’ which means their actions did not meet the culpability factor in mens rea. In all the researchers found 52 ‘errors’ in thinking. These were not necessarily unique to criminals but were considered to be displayed more by criminals, However, as there was no control group of non-criminals with whom to compare thinking patterns, this may not be an accurate assessment. The ‘errors’ included:-

A number of the errors identified would fit with a diagnosis of Anti-social Personality Disorder.

David Thornton & Robert Reid (1982) used Lawrence Kohlberg’s moral dilemmas with criminal samples and measured the results against his Stages of Moral Development concept. They found that crimes for financial gain – eg: robbery and theft – were more likely to show Pre-Conventional moral reasoning than those convicted of impulsive crimes such as assault where reasoning of any kind was not a factor in committing the crime. Jack Arbuthnot, Donald Gordon & Gregory Jurkovic (1987), in a review of 15 studies that all used control groups, concluded that there are clear differences in moral attitudes toward the acceptability of various offences. More delinquents were functioning at Kohlberg’s  Level 2 while more non-delinquents were functioning at Level 3. However the researchers also note that in 3 studies delinquents were found to have higher stage moral reasoning. Emma Palmer & Clive Hollin (1998) compared moral reasoning between 122 male and 210 female non-delinquents and 126 convicted male offenders in Young Offenders Institutions. All were from the Midlands and aged 13-22 years old. All participants were given the Socio-Moral Reflection Measure-Short Form, which contains 11 moral dilemma-related questions – eg: not taking things that belong to others and keeping a promise to a friend. The delinquent group showed less mature moral reasoning than the non-delinquent groups.

Simon Blackburn (1993) suggests that delinquents may show poor moral development due to a lack of role playing opportunities in childhood, through which their moral reasoning could be extended.

Interestingly Peter Ashkar & Dianna Kenny (2007 found moral reasoning varied with context. They asked juvenile sex offenders and non-offenders about their moral reasoning. Both groups showed Pre-Conventional thinking in terms of the crime for which they were convicted. However, both groups also showed higher (Conventional) levels of reasoning in other contexts not related to their crime. This reflects Gravesian concepts of the motivational response (vMEMES in the vMEME stack) being related to the life conditions in the environment and people able to have varying motivations over time and from context to context.

Guðjónsson developed the theory and his Gudjonsson Blame Attribution Inventory (GBAI) from working with a sample of 224 persons who had committed criminal offences. 3 major factors representing the 3 theorised types of attribution emerged, each with good test-retest reliability (r = 0.73, 0.85, and 0.78 for mental element, external and guilt attributions, respectively).

Guðjónsson has researched extensively into the attributions offenders make about their criminal acts and the type of offence they commit. One key piece of research was Gisli Guðjónsson & Ian Bownes (1992) which used the 42-item revised GBAI (Gisli Guðjónsson & Krishna Singh, 1989) to measure the offender’s type of crime and the attribution of blame on Guðjónsson’s 3 dimensions. The participants were prisoners serving sentences in Northern Ireland. The first group was composed of 20 who had committed violent offences including homicide and grievous bodily harm. Their mean age was 29. The second group was composed of 40 sex offenders, including rapists, paedophiles and those who had committed sexual assault. Their mean age varied from 41 for the paedophiles to 28 for the other offenders in the group. The third group of 20 had committed property offences such as theft and burglary. Their mean age was 29. The mean results are in the table below:- 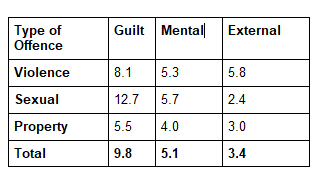 Guðjónsson & Bownes had anticipated that the sex offenders would show the most remorse, with the property offenders showing least remorse. When this sample was compared to a similar sample of English prisoners, violent Irish prisoners showed lower mental element, less guilt and higher external attribution scores. However, the basic pattern was similar, suggesting there is a strong consistency in the way categories of offenders attribute blame for their crimes. Guðjónsson & Bownes suggested that the higher situational attribution for violent crimes amongst the Northern Irish offenders might have been due to ‘The Troubles’ and the sectarian violence prevalent at the time.

Parents, peers and learning
Both the Cambridge and Peterborough studies identified families as a key risk factor in whether children grow up to become criminals. Social class/low income and disruption of the family – ie: absent parent – were considered critical…but perhaps the most important was poor parenting.

Sheldon Glueck & Eleanor Glueck (1950) had previously expressed great concern about the relationship between certain types of family and crime. Beginning in 1940 the Gluecks undertook a large, longitudinal study of 500 boys, delinquent and non-delinquent, from English, Irish and Italian families in poor urban areas.Their study led them to conclude that delinquency is rooted in early childhood experiences, with discipline and family life being of paramount importance. The Gluecks found that delinquency begins long before children become adolescents, signs often being visible by the time children are between 3 and 6 – and almost always before they are 11. Sheldon Glueck (1964, p285) states: “The onset of persistent misbehaviour tendencies was at the early age of seven years or younger among 48 per cent of our delinquents, and from eight to ten in an additional 39 per cent; thus a total of almost nine-tenths of the entire group showed clear delinquent tendencies before the time when boys generally become members of organised boys’ gangs…” The Gluecks (1950, p133) particularly identified the role of violent parental discipline as a key predictor of delinquency: “All in all, the most marked difference between the disciplinary practices of the parents of the delinquents and those of the non-delinquents is found in the considerably greater extent to which the former resorted to physical punishment and the lesser extent to which they reasoned with the boys about their misconduct.”

Effectively the Gluecks are arguing, in part at least, that the more children are taught to reason, the less likely they are to commit delinquent acts – which ties in to some extent with Kohlberg’s work and the findings of Thornton & Reid.

Ronald Slaby & Wendy Roedell (1982) confirm the Gluecks’ findings on parental violence, writing: “one of the most reliable predictors of children’s level of aggression is the heavy use by parents of harsh, punitive discipline and physical punishment…. Parental punitiveness has been found to be positively correlated with children’s aggression in over 25 studies.”

The complexity of parent-child relationships is illustrated by William Healy & Augusta Fox Bronner (1936) who posit that difficulties and resentments against parents are sublimated into anti-social behaviour. Sublimation is, according to Anna Freud (1936), an ego defence mechanism – termed a selfplex defence mechanism in Integrated SocioPsychology. In Healy & Bronner’s view, as a result of difficulties in establishing or maintaining emotional ties with parents, people channel these dissatisfactions into anti-social activities. A child is, after all, taught to love its parents (by its parents, according to Dale Hay & Jo Ellen Vespo, 1988). So experiencing feelings that compromise that injunction to love could, in Freudian terms, be repressed into the Unconscious. Such conflict, theoretically, could then be sublimated into some other activity that reflects repressed hostile and frustrated emotions. Healy & Bronner supported their view via a study of children attending a behaviour guidance clinic. A group of delinquent children with a history of offences were found to have experienced difficult relationships with parents and, in addition, demonstrated greater emotional problems when compared to a non-delinquent group.

A closely-related Psychoanalytic theory is that of John Bowlby whose Maternal Deprivation concept (1969) holds that bond disruption between bond disruption between mother and child at an early stage could result in ‘Affectionless Psychopathy’. The resultant complete lack of empathy with others and total disregard for moral codes could lead to juvenile delinquency and anti-social behaviours such as stealing. (The characteristics of Affectionless Psychopathy – a term which never really caught on – were later subsumed into Reactive Attachment Disorder.)

In Integrated SocioPsychology terms, Bowlby demonstrates that when the PURPLE vMEME fails to find the security it needs in the parental relationship, a rather unhealthy manifestation of RED is likely to come to dominate the vMEME stack.

Certainly children usually develop their first values and acceptable norms their from their parents. Functionalists hold that the key role of the family is to socialise their children with suitable values and social norms so that they grow up to become ‘good citizens’, able to play their parts (social roles) in enabling society to continue. Cambridge (David Farrington & Donald West,1990) concludes that failure of the family to provide adequate socialisation and informal social control can lead to crime.

Behaviourists take the view that there are 2 main ways young children learn from parents. Firstly through Operant Conditioning: behaviour that is rewarded must be right – hence it is directly reinforced. Behaviour that is punished must be wrong. (This is effectively Pre-Conventional moral reasoning in Kohlberg’s Stages of Moral Development.)

This learning process can go right through life: eg: eg: a first-time burglar getting away with high-valuable jewels is likely to try again.

Secondly, young children learn from their parents through modelling those they identify with in a novel situation and vicarious reinforcement – learning from seeing others rewarded or punished (Social Learning Theory). Cesar Rebellon (2006) found that, if delinquent behaviour was rewarded vicariously (by attention or other gratification), others will increase their own delinquent behaviour.

Obviously those principles can apply to learning from siblings and peers too. It is well established that, in their teens, young people are often socialised more by their friends than parents. Ronald Akers et al (1979) carried out a large study – 2,500 American male and female adolescents – to investigate drinking and drug behaviour. They found the most important influence on this deviant behaviour was peers, with differential association, direct reinforcement and imitation accounting for 68% of the variation in alcohol use and 55% of alcohol use.

Edwin Sutherland (1947) applied some of these ideas to crime and deviance quite specifically in his theory of Differential Association. In this concept there are 2 key assumptions:-

From these 2 assumptions 9 prinicples are developed:-