Part 2
Lower Left Quadrant and Minority Influence
Social heroes usually can achieve little or nothing on their own. They need collaborators and, if they are leaders, they need followers.

This means the social hero has to convert others to their cause and, thus, create a minority influence. The more people are converted to the cause, the more conversion to the cause (as a process) picks up momentum – the ‘snowball effect’ (Eddy Van Avermaet, 2001). Eventually the minority grows into a snowball so large that it becomes the majority. The social hero in the Upper Left is influencing culture and thought in the Lower Left.

So how does a social hero convert others and how does a minority gain enough converts to become a majority? Giddens posits that people in general have a deep-seated need for ‘ontological security’, that their world is orderly, stable and predictable. Therefore, by their actions most people most of the time reinforce the existing culture and structure, There is a sort-of natural resistance to change. Just how resistant to change will vary as to which vMEMES dominate in a culture; individual resistance will also vary as to where that person is on their Dimensions of Temperament. People who are phlegmatic are likely be more resistant than people with the impulsiveness of Psychoticism.

Any conversion or persuasion process is dependent on the memes put out by the would-be ‘converters’ becoming internalised as the schemas of the target audience. From the work of Jean Piaget (1937), how easy or difficult that process will be is influenced in part by whether the incoming memes are close enough to the existing schematic set-up to be assimilated easily. If the incoming memes are quite different from the existing schematic set-up, then a process of accommodation needs to take place in which the evidence may have to be weighed up and tested time and time again until it is overwhelming.

An example of the incoming memes requiring a lengthy accommodation process until the evidence was overwhelming is the medical argument that smoking tobacco is likely to lead to serious and potentially fatal illnesses such as lung cancer. From the first large-scale study in the UK to confirm a link between smoking and lung cancer (Richard Doll & Bradford Hill, 1950), it took 15 years before cigarette advertising was banned on British TV and another 6 years for cigarette cartons to start carrying a health warning. It took until 1975 before there was the first recorded fall in lung cancer deaths – and then only in males! (Amanda Sandford, 2013)

If the incoming memes are too different from the existing schematic set-up, however, they are likely to be rejected out of hand. This is particularly likely if the incoming memes fit more with a different vMEME than the one currently dominating the audience member’s selfplex. Eg: memes about order, consistency and duty would be assimilated relatively easily by someone dominated by BLUE but will almost certainly be rejected by RED.

Using  Richard Petty & John Cacioppo’s (1981) Elaboration Likelihood Model, a key factor in deciding whether a message should be targeted via ‘central route’ processing or ‘peripheral route’ processing will be how closely the values inherent in the message match the value set of the vMEME(S) dominating in those to whom the message is being addressed. If there is a close match, there can be a clear focus on the content of the message (central route).

According to Petty & Caccioppo, such a’conversion’  is also more likely to be a temporary effect. Shelly Chaiken demonstrated experimentally in 1980 that peripheral route conversion was less stable. In vMEMETIC terms, though, compliance may lead to what Don Beck & Chris Cowan (1996) call a ‘stretch-up’ to borrow language and concepts from a slightly more complex way of thinking. Repeated ‘stretching up’ may eventually lead to assimilation of the new memes and activation of the higher vMEME. Beck (2002a) says that the trick here is to make sure the language and concepts are ‘only half-a-vMEME’ beyond current thinking – so that the message is not totally beyond them. Thus, compliance with concepts that require a just-about-manageable stretch may actually prove a step towards change. (In making the message just about on the edge of accessibility, Beck is reflecting Lev Vygotsky’s (1934) identification of the Zone of Proximal Development, to draw people into a new level of knowledge and understanding.)

However, it may also be that the PURPLE and RED vMEMES are more easily persuaded via the peripheral route anyway due to the way they process, making them generally what Susan Fiske & Shelly Taylor (1991) call ‘cognitive misers’. They have what Petty & Caccioppo term a ‘low need for cognition’ and are more influenced by how the package – message and means of delivery – make them feel. On the other hand BLUE, in its desire for perfection, runs a Little Detail meta-programme, reflecting a very ‘high need for cognition’. ORANGE also has a high need for cognition but tends to run a Big Picture meta-programme. In other words, ORANGE wants a convincing argument but in headlines rather than detail. 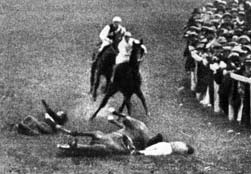 Emily Davison brings down the King’s horse in 1913

Robin Martin, Miles Hewstone & Pearl Martin (2003) argue that being exposed to such sacrifices draws attention to the views their campaign is expressing and so challenges the ‘givens’ of the majority. This creates a mental conflict – cognitive dissonance – that most people are motivated to reduce.

Of course, minorities have to organise, effectively becoming pressure groups. The more the pressure groups can perceive the intersections of their causes with other causes championed by different pressure groups, the more opportunity there will be to collaborate –  eg: feminists working with anti-racists – to create multiple pressure points on the ‘system’. Various equal rights and anti-discrimination legislation over the years have been enacted as a result of minorities using effective pressure group strategies, such as canvassing MPs, through boycotting of major retailers, to demonstrations and marches. In 4Q/8L terms, this is the Lower Left influencing change in the Lower Right.

More extreme actions, such as violence on demonstrations or the use of bombing campaigns tend to alienate the general public and undermine sympathy for the cause. However, extremist activity can have the effect of making moderate activists for a cause seem much more reasonable and, thus seem more like people to ‘do business with’. This is the Assimilation-Contrast Effect in action. Those who are less rigid in their demand for social change look positively moderate (assimilation) when set against violent extremists (contrast). Giving the moderates some of what they want builds up relationships while isolating the extremists. This is change as Parsons (1966) and the Functionalists advocate it should be managed and shows change in the Lower Right – concessions to the moderates – diffusing semblances of unity and exacerbating difference in the Lower Left.

This meets Moscovici’s observation that not appearing too fanatical works in the interests of the minority. However, it also finds place for Arie Kruglanski’s (2003) contention that terrorism can be an effective minority influence tactic – precisely because it pushes the majority into dealing with the moderates in the minority.

Timing can be critical in negotiating concessions with the moderates and isolating the extremists. If the moderates appear to be making little or no progress, then some of them will be susceptible to being radicalised to more extreme tactics. An example of this, it could be argued, is what happened in Libya and Syria in 2011 when street demonstrations against the policies of Muammar Gadaffi’s and Bashar al-Assad’s respective regimes were repressed violently, resulting in a number of the demonstrators taking up arms against their governments. Increasingly violent demonstrations and repressions eventually mutated into outright civil wars.

Of course, sometimes pressure group actions are so effective, the minority exerts influence without ever becoming a true majority. This sometimes is due to identification with those in power. Michael Hogg & Graham Vaughan (1998) argue for an in-group effect here – ie: we are most likely to be influenced by members of our in-group than we are by members of an out-group. An example could be the British government of the early 1900s who, as it consisted mainly of upper class male MPs, was more likely to listen to the message being put forward by Suffragette women if the Suffragettes were also upper class (which a great many of them were). This may also be an example of peripheral route persuasion, as it was who was putting out the message that made it relevant to them more than what the message was.

Such an example of a minority remaining a minority but exerting significant influence over the majority requires us to consider power relationships in terms of ability to influence and change.

And what happens if a minority has so much power it can defy a majority…even in a so-called democracy?!

An unbroken example of this is Parliament’s consistent refusal to restore the death penalty for murder in spite of majority public support for a restoration since the beginning of the 1970s. As Leo Barasi’s 2011 summary chart (below) from various contemporary polls shows, there was still a majority in favour of restoration. The minority in Parliament have the power not to comply with the wishes of the British people. In vMEMETIC terms GREEN valuing of human life over all things uses BLUE legal structures to defy the PURPLE/RED/BLUE vMEME harmonic which wants legalised retribution on those who murder.

Lower Left Quadrant and zeitgeist
The Lower Left is also where we need to consider how zeigeist morphs and its influence on the ‘climate’ for social change.

As discussed earlier, the 1950s was a deeply conservative time in the United States.

Stephen Perrin & Christopher Spencer (1980), in trying to explain their failure to replicate the results of Solomon Asch’s famous  lines experiment (1951) attributed the difference in conformity to the conservatism of 1950s America as against the liberalism of England in 1980. They particularly pointed out the effects of ‘McCarthyism’, the strong ‘all-American’, anti-Communist hysteria across 1950s US which made many people frightened of being different for fear of being branded ‘un-American’. In contrast, having gone through, first, ‘hippie culture’ and then the ‘punk revolution’, Britain at the start of the 1980s was a much more liberal, anything-goes/express-yourself kind of place than it had been. 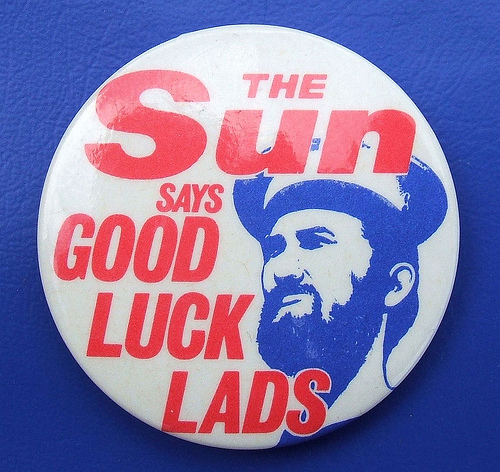 Support for Perrin & Spencer comes from Nigel Nicholson, Steven Cole & Thomas Rocklin (1985) who found a modest but quite definite level of conformity among British students. Nicholson, Cole & Rocklin attributed the increase in conformity to the greater sense of national social cohesion which developed from Britain’s engagement in the Falklands War. During the war, most of the mainstream media put on a great show of patriotism, making it de rigeur for most citizens to appear to support the war effort (David Morrrison & Howard Tumber, 1988). This, it could be argued is a case of the Lower Right manipulating the Lower Left.

Thought the term ‘zeitgeist’ is not always used, the idea that different eras produce different cultural outlooks is enshrined in popular Western mythology. Thus, the 1950s were deeply conservative while the 1960s were radical and avant garde, with change a near-constant occurrence. The 1970s didn’t produce much of a strong identity beyond the iconclasm of punk. In contrast the 1980s, epitomised by Margaret Thatcher and Ronald Reagan, eventually came to be characterised by as the decade of self-aggrandisement by the ‘me-me-me generation’.

Feminism, anti-racism and an increasingly liberal attitude towards homosexuality were just some of the major attitudinal shifts that came from the zeitgeist of the 1960s.

In some ways, the gay rights campaigns which began in the 1960s and are still active, at the time of writing, on such key issues as gay marriage, are powerful examples of Mosovici’s 4 elements for successful minority influence:-

The success of the gay rights campaigns – in the Western world at least – is indicated by the increasing acceptance of homosexuality, as shown on the graph right.