Home » Society & Community » MeshWORKS » How to build a MeshWORK

It is difficult to be prescriptive about developing a MeshWORK.

Because the Gravesian approach enables us to recognise and work with a number of different value systems (vMEMES) in play at any one time, MeshWORKS interventions – and, indeed, the very structures to deliver those interventions – will be dependent on the needs of the client peoples and/or organisations.

So a MeshWORK is highly organic and readily flexible, shifting its structure and its interventions to meet the changing circumstances and the changing natures of the client peoples and/or organisations.

However, there are 2 core principles:-

In any kind of people interaction, from a partners in a marriage to decision-makers in a major plc, meta-programmes can help identify and sometimes refine vMEMETIC information about just what memes people are attempting to infect each other with.

As a basic example, the schematic below sets out some of the more obvious partners in a regeneration MeshWORK and the kinds of questions they might need to ask. 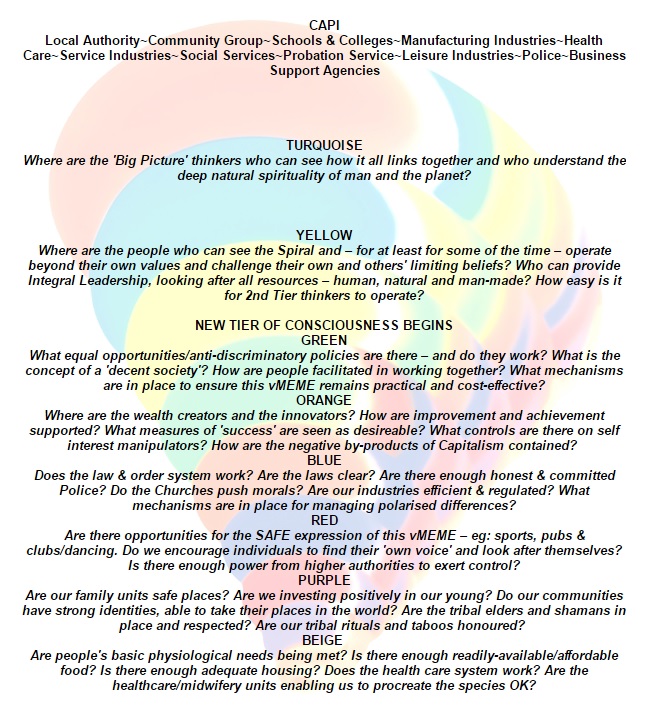 Clearly, the questions to ask around each level would be different in a business or an education MeshWORK. In fact, the questions to ask might be quite different in each MeshWORK of any description – because the Gravesian approach and its Spiral Dynamics builds recognise the unique mix of vMEMES and the values, beliefs and norms that go with them in any given context.

Once the questions are answered, it is then possible to start constructing strategies that will meet the needs at all the levels, bearing in mind the greater good of the entire Spiral.

If we look at the example above from a 4Q/8L perspective, then we get more detail – and the realisation that different strategies may be necessary in each of the Quadrants – especially if the Quadrants are not aligned vMEMETICALLY.

Occasionally MeshWORK designers do develop variations on the standard 4Q/8L structure to meet the specific needs of their projects. Probably the best known of these is the very powerful one developed by Gernia Van Niekerk who has got several wholescale MeshWORK projects off the ground in rural South Africa – eg; the Rosedale MeshWORK. Her version of 4Q/8L is sometimes known as The Gernia Variation.

Even with the enhanced mapping 4Q/8L provides, MeshWORK designers need to watch for the nuances of vMEME transition states and, both in and across the Quadrants, the working together of vMEME harmonics.

Once the questions are answered, it is then possible to start constructing strategies that will meet the needs at all the levels in all the Quadrants, bearing in mind the greater good of the entire Spiral and the fact it may not be possible realistically to meet all needs at all levels in all the Quadrants all the time. Van Niekerk’s Rosedale MeshWORK provides an excellent example of the MeshWORK question-and-strategy approach.

Working in the Upper Right Quadrant
Of course Beck does not apply the concept of vMEMES to the Upper Right. So there are 2 principal areas of investigation in that Quadrant:-

As more and more is revealed about the effects of physiology (Upper Right) upon thought and intention (Upper Left), it becomes clearer and clearer just how vital health in the Upper Right Quadrant is to any MeshWORK design.

Working in the Upper Left Quadrant
The schematic below takes our basic example of MeshWORK questions and and shows some of the more detailed questioning possible by focussing just on this Quadrant. 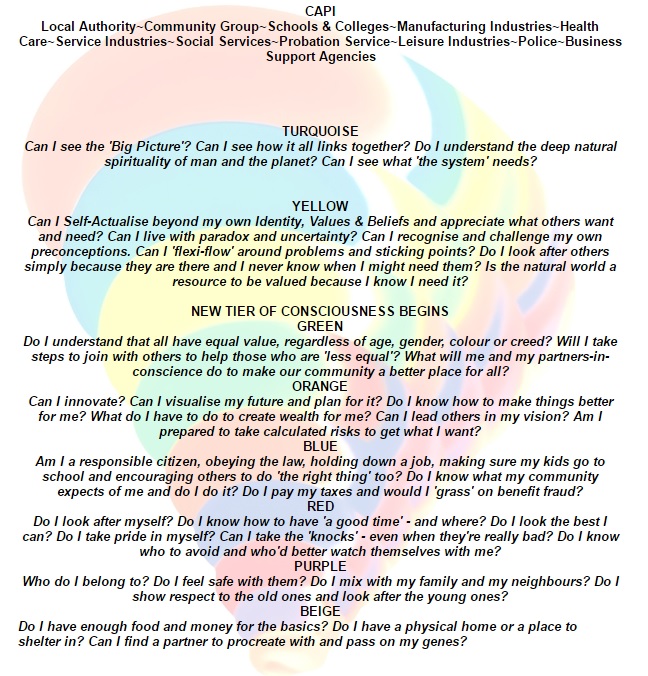 In the Upper Left the focus is on me, my perceptions, my motivations, my values, my beliefs, my memories and my intentions.

Working in the Lower Right Quadrant
The focus shifts substantially when dealing with the structures and institutions of any social grouping, from a family to a plc, to a community earmarked for regeneration! (The word ‘organisation’ can be used in this context to mean any form of grouping, from a marriage to a TNC.)

The example below gives some idea of what questions might be asked of our regeneration MeshWORK in the Lower Right Quadrant.

Clearly the means by which any form of society functions is relevant to this Quadrant. Hence Functionalism is relevant here. 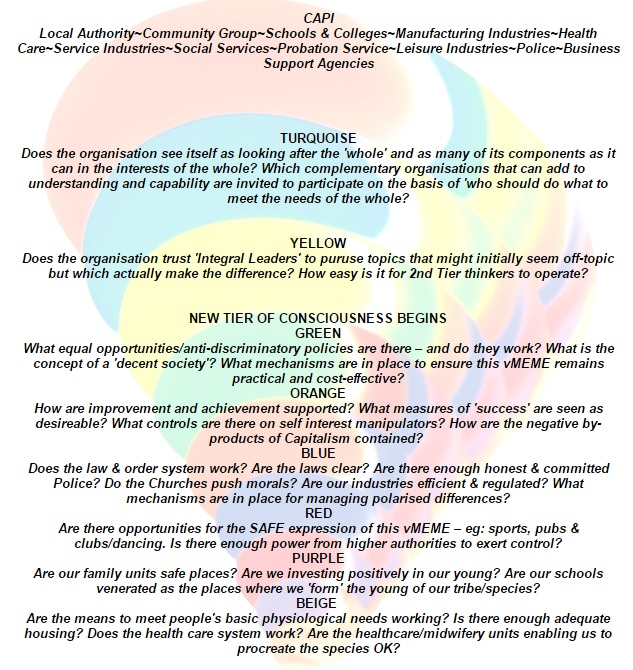 A complementary way to approach this Quadrant is to use the Organisation LifeCycle concept. This is especially potent when dealing with structure in a fairly-defined organisation with a variation in the roles of its members. Adizes’ version of the life cycle was developed from work in commercial companies and remains more suited to that kind of organisation. Nonetheless, it can, with some degree of adaptation, be used effectively in most kinds of organisation, Adizes claims he has even used the construct to save marriages!

A truism no doubt; but the kind of sentiment that propelled George Herbert Mead (1934) and the other founders of Symbolic Interactionism to focus on people and how they interact – positively, to create a common identity through shared values, beliefs, memories, understandings, intentions and all the other components of culture.

(However, other theorists, from Karl Marx to Jürgen Habermas, have seen the determination of culture as being more brought about through conflict – usually also involving what we would call the Lower Right.)

The example below gives some idea of what questions might be asked of our regeneration MeshWORK in the Lower Left Quadrant. 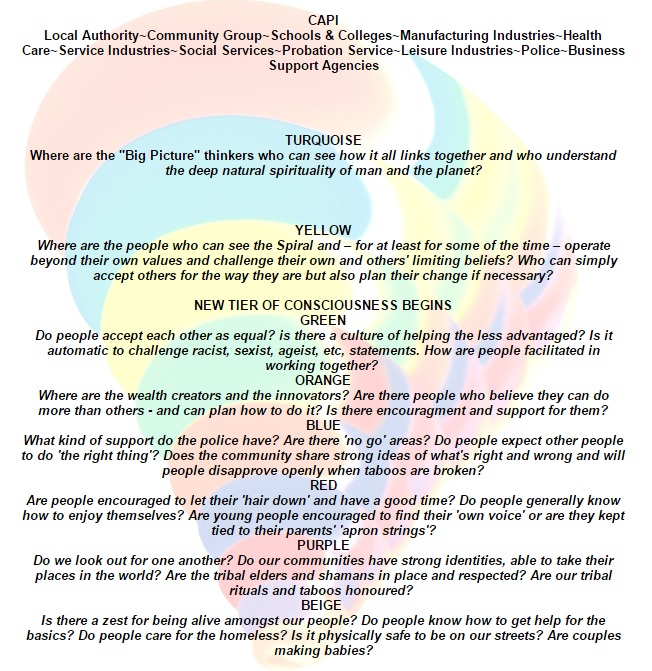 The need for MeshWORKS
MeshWORKS are often necessary because of some kind of conflict. Interventions often cause further conflict – at least in the short term. Therefore, it is very helpful to know how vMEMES approach conflict – which Beck (2003) has mapped out in the Assimilation Contrast Effect, thus enabling anticipation of responses and strategies to absorb and/or counter their effects.

Here we must bear in mind the assertions of Adizes (1996) that certain tensions are natural and inevitable and our efforts should be on managing and balancing them, rather than trying to resolve them. Which means that even the most well-designed MeshWORK will never arrive at a final, ultimate solution. Because things change and balances slip, there need to be those who understand the MeshWORK concept and and are able to adjust and fine-tune it as life conditions inevitably change.

I have used 4Q/8L in helping to design MeshWORKS at organisational levels. Click here to view a case study of work with a commercial company (Hodgson Sealants Ltd) and click here to view work with a local authority team (North Lincolnshire Council Community Investment Team).

Fred Krawchuk has outlined the 5Ps – Purpose, People, Place, Process, Practice – as an meta-system for developing, managing and reviewing a MeshWORKS process. As an ex-colonel in US special forces, Fred and his colleagues have the distinction of making this MeshWORK design work in the inhospitable and dangerous environment of rural Afghanistan.