PART 3
Rejecting Inequality (Days 1 to 6) (cont)
Days 3-4
On Day 3 the guards decided which prisoner should be promoted – the selection of the individual being made by the guards on the basis of a procedure suggested by the researchers. After this promotion, the possibility of movement was removed by announcing that there would be no further promotions (or demotions) – thus, stating that the situation was now impermeable..

With permeability shut down, the prisoners now took on the guards as a group. Almost instantly they began to act together and started to agree norms of behaviour. They started teasing the guards, humiliating them and challenging their authority. On Day 4 3 of the prisoners defied 3 guards, demanding better food. The guards could not agree how to respond, so came off worse in the confrontation. 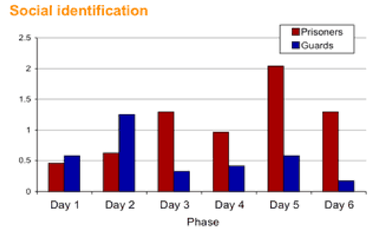 Day 5
With the prison in disorder the researchers made their second planned intervention on the morning of Day 5. An experienced trade union negotiator (prisoner 10) was introduced as a further prisoner. With his background, Reicher & Haslam believed that his introduction would enable the prisoners (and the participants more generally) to envisage the achievement of a more equal set of social relations. He would offer an alternative vision and provide some order to the simulated prison. They were interested to find out if this individual would change the situation or whether the situation would change this individual.

Prisoner 10’s opportunity came when the prisoners stole the keys off the guards who were then prepared to negotiate to get the keys back. In the meeting which followed there was a confrontation between the trade unionist and a very powerful and charismatic prisoner. The trade unionist suggested a forum where prisoners and guards would meet daily to discuss grievances The trade unionist won the argument.  He had helped to harness the group and the guards were eager and pleased to accept this arrangement.

Qualitative measures showed that participants became increasingly aware of cognitive alternatives  –  eg: “I think the relationship between prisoners and guards is likely to change.”

Day 6
Initially what was now to all intents and purposes a commune worked effectively. Almost all of the participants believed in it and the participants identified with the commune – its structure and its rules. Eg: previously cleaning duties had been completed reluctantly but now the participants completed these duties much better and worked hard for the system. For a short time this was a very harmonious system. However, it became very apparent that not everybody in the commune was happy with it. 3 participants started to make trouble for the commune members and stopped doing their chores. 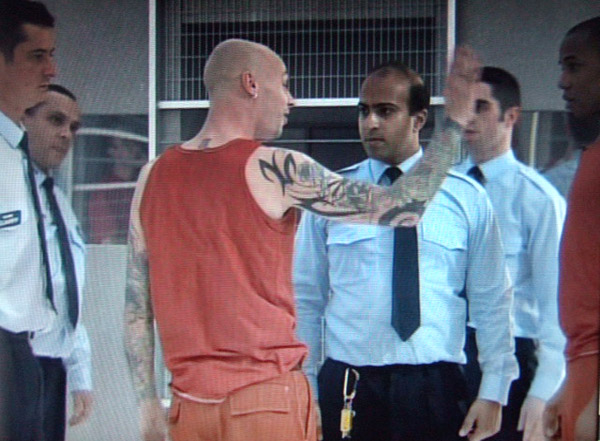 On the morning of Day 6 the researchers withdrew the trade unionist from the study. The other prisoners were told that he was withdrawn for health reasons.

During this morning of the 6th day by chance the breakfast was of poor quality and this exacerbated the crisis. This was incorrectly taken as a sign that the experimenters disapproved of the commune system. A power vacuum appeared and some of the former prisoners and guards believed that this was a vacuum that they could fill and they came up with a plan to reinstate the old prisoner/guard regime but with themselves as the new guards.

As a result, late on the evening of Day 6, the prisoners in Cell 2 broke out of their cell and occupied the guards’ quarters. At this point, the guards’ regime was seen by all to be unworkable and at an end.

Embracing Inequality
Days 7 – 8
It was proposed by the new guards that this new regime would have strict rules and punishments to ensure that everyone ‘toed the line’. The nature and tone of this new regime was made clear in discussions about the form this would take. As one of the participants put it: “We want to be the guards and fucking make them toe the line, I mean on the fucking line. No fucking talking while you are eating. Get on with your food and get the fucking hell back to your cell.”

Shortly after breakfast, this group convened a meeting where their leader berated the commune and its supporters and he introduced the idea of the new hierarchy. The supporters of the commune were largely passive in response. They looked despondent and listened in silence. During debriefings, a number of them acknowledged that, although they would not have openly endorsed such a hierarchy, they were less opposed to it than they had been previously and that they felt less repulsed by the idea of a strong social order in which someone else assumed responsibility for making the system work.

Interestingly, the psychometric tests had revealed that beliefs in right-wing authoritarianism increased throughout the study for both prisoners and guards.

The study was halted at noon on Day 8 the original intention had been to run it for 10 days – because the researchers believed that the study was gridlocked. The researchers believed that the new guards would have had the force to impose their regime in the face of weakening resistance but that such force would be prohibited according to ethical guidelines.

The participants remained for a further day in order to undertake a series of structured and extensive debriefings designed to obtain and provide feedback on their experience, to explain the rationale for the study and to overcome any hostility between individuals deriving from events in the study.

Edited footage, with commentary from Reicher & Haslam, was broadcast as ‘The Experiment’ in 4 one-hour programmes on 14th, 15th, 21st and 22nd May 2002. The 4 episodes dealt sequentially with each of the main phases of the study: ‘Conflict’, ‘Order’, ‘Rebellion’ and ‘Tyranny’.

Evaluation of the BBC Prison Study
Reicher & Haslam argue that their findings concerning reactions to inequality cannot be explained through a general or ‘natural’ tendency to assume roles and assert power. Instead, they argue that there are a range of factors that determine whether people themselves identify with the social positions to which they are ascribed by others. Some of those factors operated in ways identified in Social Identity Theory.

Haslam discusses some of this in the video below.

The researchers argue that groups are the basis for collective self-realisation – that is, the creation of a social order based on shared values and norms. However, where groups fail, the researchers argue that people will be more inclined to accept the imposition of a social order by others, even where that violates their values and norms. Therefore, in contrast to those who explain tyranny and other extreme social phenomena in terms of the psychological dysfunctionality of groups, Reicher & Haslam interpret them in terms of the dysfunctionality of group failure.

The researchers also claim that a major achievement of their BBC Prison Study is to show that, if sufficient care is taken, it is possible to run powerful and influential field studies that involve ethical issues.

In their 2006 article on their investigation Reicher & Haslam provide 4 potential critiques of their study:-

Zimbardo drew a clear distinction in methodology between the Stanford study and the BBC study: at Stanford the participants were only observed through hidden cameras whereas the BBC participants wore microphones which would make them much more aware that they were being filmed. This, he claimed, would lead some of the participants to show social desirability bias in how they behaved for fear of being perceived in an unfavourable light by the television viewers.

Zimbardo also criticised the study for lacking ecological validity since prisoner domination of guards is not observed “anywhere in the known universe”. In their response Haslam & Reicher (2006) countered that a key purpose of their study was to demonstrate the theoretical possibility of resistance, noting that this is a feature of most social systems in which tyranny prevails, as argued by Michel Foucault (1977)   The researchers also observe that the imprisonment of leaders is often important for the development of resistance movements and for processes of social change. Notable late 20th Century examples include South Africa’s Robben Island (famous for Nelson Mandela’s incarceration) and the Maze in Northern Ireland (which housed Provisional IRA and protestant paramilitary leaders in separate wings); in both cases, the prisoners exerted considerable power and influenced very strongly how the prisons were run.

In Integrated SocioPsychology terms the failure of the guards to develop a strong group identity facilitated the prisoners’ RED vMEME in overturning their weak attempt at order. The commune which then developed seems to have been driven by a GREEN intention to establish equality. However, the commune’s inability to contain RED in turn enabled the new guards to seek to establish a tyranny based on a RED/BLUE zealotry to impose the strictest of rules.

What is perhaps the most disturbing aspect of the BBC study is the acquiescence of the others to the establishing of a highly authoritarian regime. This reflects the unpalatable fact that people often wish for such an authority when in seriously adverse and uncertain conditions.

Situationalism vs Dispositionalism
The Stanford and the BBC studies produced some quite different results. Partly this can be explained by the fact that permeability was built into the first 3 days of the BBC study while the groups were rigidly divided at Stanford. Also, how ever much Zimbardo wants to attribute Stanford to situational factors, there is little doubt that Dave Eshelman was a huge influence on the guards, effectively becoming their unofficial leader – a significant dispositional factor.

Dispositional factors undoubtedly influenced the BBC study too – though less obviously centred on one man. While the trade unionist introduced on Day 5 clearly was a pivotal influence, his withdrawal on Day 6 meant he had less time to establish a significant degree of dominance as Eshelman had at Stanford.

This gives both studies a degree of ecological validity because real life is often a mix of situational and dispositional factors.