Conformity and obedience are 2 principal and related topics of study in the psychological area of Social Influence. The difference between the 2 concepts can be summed up as:-

Informational Influence is when someone  conforms to a group norm because they believe this is the right thing to do in the circumstances. Deutsch & Gerrard (p629) say it is “an influence to accept information obtained from another as evidence about reality.” According to Herbert Kelman (1958), the desire to be correct produces the process of internalisation. He (p53) describes it as: “when an individual accepts influence because the content of the induced behaviour – the ideas and actions of which it is composed – is intrinsically rewarding. He adopts the induced behaviour because it is congruent with his value system.” In terms of Richard Petty & John Cacioppo’s (1981) Elaboration Likelihood Model, this is a clear example of ‘central route’ processing, whereby the content of the message is more important than how it is presented. with recipients of the message processing it deeply. Because it is internalised, the change is usually long-lasting and doesn’t need group pressure for it to continue.

The concept of internalisation also brings into play the whole field of Memetics and how incoming memes are or aren’t converted into schemas – with the degree of difficulty a reflection of Jean Piaget’s (1937) assimilation–accommodation continuum. Informational influence can lead to a change in private opinion. Because it is internalised, the change is usually long-lasting and doesn’t need group pressure for it to continue.

The more ambiguous a situation is, the more likely people are to defer to the views of others they think might know better.

Normative Influence is when someone conforms to a group norm to win the approval of the group and to avoid disapproval and, potentially, rejection. It is driven by the desire to be liked – or at least to fit in. Deutsch & Gerrard (p629) describe it “an influence to conform with the positive expectations of another.” According to Kelman, the desire to fit in produces the process of compliance. He (p53) describes it as “when an individual accepts influence because he hopes to achieve a favourable reaction from another person or group. He adopts the induced behaviour because…he expects to gain specific rewards or approval and avoid specific punishments or disapproval by conforming.” Because there is little or no change in private opinion, people are likely only to comply when there is public pressure.

Compliance usually takes place in an unambiguous situation. The individual knows clearly what they have to do to win group approval.

Kelman provided support for the distinction between compliance and internalisation through a study with black American students. The students were presented with a message that it was important to preserve some private black colleges as all-black institutions. This was initially opposed by most of the students. In the compliance condition, the students were told that the message came from a very powerful man who would withdraw funds from any college that disagreed with his position. In the internalisation condition, the same message was cited as being from a top expert on the problems of minority groups. After the message had been presented, the participants completed a questionnaire concerning the relevant issues. Some students were told their answers would be shown to the person delivering the message (public responding) while others were told their answers would be anonymous. What Kelman found was that students responding publicly in the compliance condition claimed to be significantly more influenced by the message than those allowed to respond privately. On the other hand, in the internalisation condition there was little difference between those allowed to respond privately and those required to respond publicly.

The degree to which someone submits to normative influence obviously will be influenced by the PURPLE vMEME’s need for acceptance and belonging. Those in whom RED is healthy and strong – and, thus, have high self-esteem – may be less likely to conform on the basis of normative influence. Where someone tends to locate on the Extraversion Dimension of Impermanent may also affect how compliant someone is. N N Trauel (1961) found that introverts tend to be much more compliant than extraverts. The assumption is that being compliant results in less conflict and, therefore, less external noise.

Kelman identifies a third conforming process: identification. This is to meet the expectations inherent in social roles. He (p53) says it occurs when “when an individual accepts influence because he wants to establish or maintain a satisfying, self-defining relationship to another person or group.”  Eg: nurses, teachers, traffic wardens, etc, etc. The individual identifies with a role and this leads to conformity to a norm. Kelman here is prefacing Erving Goffman’s (1959) ‘dramaturgical’ concept of identities as ‘masks’ which are worn according to the demands and expectations of the context in which the individual is operating at that time. The identity-context dual helix is also a key element in Robert Dilts’ (1990) model of Neurological Levels.

One of the most important studies ever taken into identification and social roles – and one of the most controversial! – was Philip Zimbardo’s Stanford Prison Experiment.

Research into conformity
One of the earliest experiments into what became known as informational influence was that of Arthur Jenness (1932). He had students make individual estimates of the number of jellybeans in a bottle – a truly ambiguous task! He then allowed the students to discuss the task and then to re-estimate individually the number of jellybeans. What he found was that the second set of estimates were much closer to each other than the first, suggesting discussion had triggered informational influence moving towards a group norm. Jenness did find a gender difference in that women conformed more.

Another study was that of Muzafer Sherif’s (1935) ‘autokinetic effect’ experiment. The autokinetic effect is when very small movements of the eyes make a spot of light in a darkened room appear to move because the eyes lack a stable frame of reference. Sherif’s participants (unaware of the effect) were initially tested individually, being asked to say how far the light moved and in what direction. (The light would seem to jump and then disappear, only to reappear a couple of seconds later – again a very ambiguous task.) Answers varied considerably amongst the individuals – from 2 inches to 12! – but each individual was consistent over 100 trials – ie: each had a norm. When they were then tested a few days later in groups of 3, with very different personal norms previously – and asked to give their estimates out loud, their estimates began to converge until they were virtually identical – effectively reaching a group consensus. This happened repeatedly, thus demonstrating a group norm had superceded individual norms. The graph below demonstrates the estimates of one particular 3-person group… 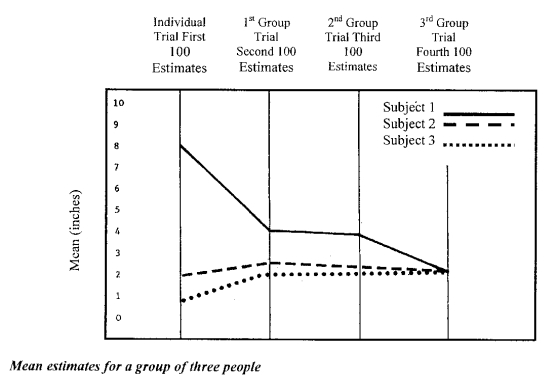 Sherif tried testing participants in groups first and then individually. He found that individual norms in this condition reflected the group norm.

John Rohrer et al (1954) found, a year after replicating  Sherif’s study, that participants on their own still used the group consensus – indicating that the consensus had been internalised. 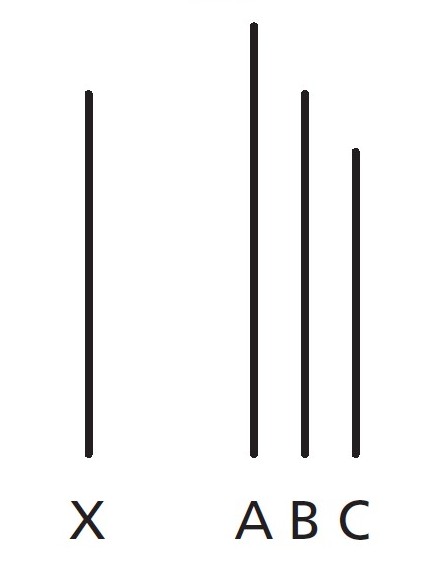 One of the most-lauded pieces of research into normative influence was Solomon Asch’s (1951) ‘lines study’. Asch set up a situation in which 7 male student volunteers all sat looking at a display. In turn, they had to say out loud which one of the three lines A, B, or C was the same length as a given stimulus line X – see left. All but one of the participants were confederates of the experimenter, and on some ‘critical’ trials the confederates were instructed unanimously to give the same wrong answer on 12 of the 18 trials. The students always gave their answers in the same order and the one genuine participant was the last (or the last but one) to offer his/her opinion on each trial. The performance of participants exposed to such group pressure was compared to performance in a control condition in which there were no confederates. In all 123 genuine participants were tested. On the critical trials where the confederates gave the same wrong answer, the genuine participants also gave the wrong answer on approximately 37% of these trials. This should be compared against an error rate of only 0.7% in the control condition – in other words, control group participants answered correctly over 99% of the time when there was no social pressure.) Many of the participants who gave wrong responses indicated that they had yielded to that social pressure. because they didn’t want to stand out. Individuals who gave only correct answers said either that they were confident in the accuracy of their own judgement or focused on doing the task as directed (ie: being accurate and correct).

Below is a replication of the Asch study.

Asch interviewed some of the participants and found 3 broad categories of explanation for their conformity:-

Asch (1956) carried out a number of variations on the original study:-