Behaviourism, as a paradigm, doesn’t concern itself with mental processes. In Classical Conditioning John B Watson (1919) treated the mind as a ‘black box’ that Behaviourists did not need to bother with. In Radical Behaviourism B F Skinner (1945) acknowledged that there were ‘private internal events’ but that these were merely the conscious experience of the body functioning. However, not all Behaviourists took such a dismissive view of the concept of internal mental processes. Some did allow for some cognition to influence behaviour.

Foremost among these was Edward C Tolman (1932) who proposed the concept of cognitive maps – although Tolman didn’t use the term, he is clearly conceptualising what we now call schemas.  Tolman developed this concept from work he had done (Edward C Tolman & Charles Honzik, 1930) on rats learning the layout of a maze they had to negotiate to get food. In the study 3 groups of rats had to find their way around a complex maze. At the end of the maze there was a ‘goal box’ of food. Some groups of rats got to eat the food, some did not, and for some rats the food was only available after 10 days. The procedure for the rats was:- 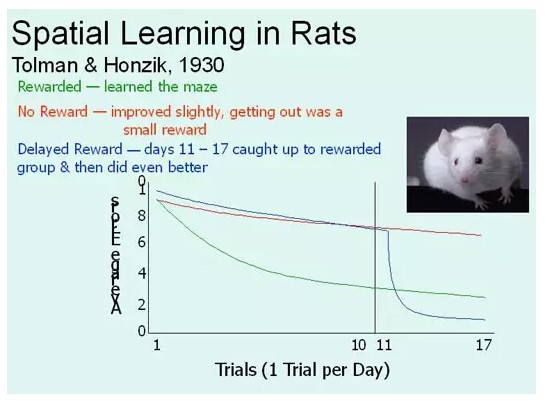 Group 2 learned the route on days 1 to 10 and formed a cognitive map of the maze. On those days they took longer to reach the end of the maze because there was no motivation for them to perform. From day 11 onwards they had a motivation to perform (ie: food) and reached the end before Group 1. Both both groups performed substantially better than Group 3.

Tolman concluded that, between stimulus (the maze) and response (reaching the end of the maze), a cognitive mediational process was occurring; the rats were actively processing information in their brains by mentally using their cognitive map (which they had latently learned). The rats had learned something without it being  reinforced immediately – which went against the standard  Behaviourist thinking of the  time.

Tolman called this ‘latent learning’ because it only shows itself later when some kind of reinforcement is  present.

Drawing from Tolman’s work, Social Learning Theory (SLT) argues that, to imitate someone’s behaviour, there has to be an intervening cognitive mediator. In other words, there is some form of cognitive process taking place between the stimulus and the response. Moreover the response can be learned and held mentally until there is an appropriate stimulus.

Bandura and the Bo-Bo Dolls
Albert Bandura is the real architect of SLT. With his famous ‘B0 Bo doll experiments’ in the early 1960s, he demonstrated the basic principles of of the concept.

The premise of the first Bo Bo doll experiment (Albert Bandura, Dorothea Ross & Sheila Ross, 1961) – as outlined in the video clip above – was to investigate whether young children would model – imitate – an adult in a situation that was novel to the child – ie: the child had no prior knowledge of how to deal with the specific new situation. The participants individually were exposed to one of 2 conditions:-

As some previous research had shown that exposure to aggression could inhibit aggressive behaviour, Bandura, Ross & Ross decided they needed to cause ‘aggression arousal’ in their participants. The young children were taken outside individually in inclement weather conditions to another room where initially they were allowed  to play with attractive toys before being told these were actually ‘special toys’ reserved for other children and they could not play with them. With the children (hopefully) now in a negative frame of mind, they were taken to another room with play objects, including a Bo-Bo doll, a dart gun and a mallet as well as ‘non-aggressive toys such as a tea set, crayon and paper and plastic animals. The children in condition 1 were much more aggressive towards the Bo-Bo doll while those in condition 2 had very low mean aggression scores and some of the children in a control group, which had not seen an adult model interact with a Bo-Bo doll, were moderately aggressive towards the Bo-Bo doll.

Albert Bandura & Richard Walters (1963), in a further Bo-Bo doll experiment, wanted to see what the effect of seeing an adult rewarded or punished for their behaviour would have on young children observing the situation. In condition 1, the children saw a film of an adult model kicking and punching a Bo-Bo doll. The condition 2 group saw a model carrying out such behaviour rewarded with sweets and a drink. The condition 3 group saw the model punished and warned not to be aggressive in future. Children from the first and second groups – the second especially – behaved more aggressively towards the Bo-Bo doll than those who had seen the model punished. Children from all 3 groups showed comparable levels of memory of what they had seen.

In yet another Bo-Bo doll study Bandura (1965) had children observe a model punished for abusing the doll. The children in the control condition – ie: they simply saw the model punished – mostly did not abuse it themselves when put alone with it. However, children who were offered rewards for modelling the adult’s behaviour – in spite of seeing him punished – were violent and abused the doll. Thus, Bandura demonstrated that personal direct reinforcement had more impact than seeing the model punished.

According to Bandura (1972) the 4 cognitive and behavioral processes involved in observational learning include:-

Observational learning also requires requires a role model – somebody the learner can identify with. It could be the model is the same gender or has a skill the learner wants to acquire or the learner sees the model being rewarded with things the learner would find rewarding. The model also needs to be clearly visible to the learner – the more visible, the easier it is to copy the behaviour. Kristin Shutts,  Mahzarin Banaji & Elizabeth Spelke (2010) are just one set of researchers who have confirmed that children are more likely to identify with and learn from models who are similar to them – particularly same-sex models.

Evaluation
Undoubtedly SLT  explains what Classical Conditioning and Operant Conditioning cannot do – ie: the effect of what others do on our own behaviour. For someone else’s behaviour to influence, there has to be a cognitive mediator to process and interpret how the observed behaviour applies to us (or doesn’t). Thus, SLT bridges the gap between Behaviourism and Cognitive Psychology.

However, SLT fails to recognise biological factors that can influence behaviour. For example, the simple fact that boys usually have more of the hormone testosterone could easily be a major contributing factor to the gender differences Bandura, Ross & Ross found in their Bo-Bo doll study. Correspondingly it doesn’t factor in differences in temperament which make responses to stimuli highly variable – eg: someone who is more towards the high end of the Psychoticism Dimension of Temperament is much more likely to respond rapidly – and likely aggressively – than someone who is at the low end.

The low aggression scores of the children in condition 2 of Bandura, Ross & Ross suggests that children – and, presumably then, adults – can learn to handle situations in a non-aggressive way by modelling others being non-aggressive.

Modelling usually takes place in a new – ‘novel’ (to use Bandura’s term) – situation to the individual. That ‘newness’ it and of itself almost always involves ambiguity. Eg: in the first Bo-Bo doll study the children had never had contact with Bo-Bo dolls before; therefore, they would not have known what to do with them. (In fact, one of the children at least had seen a Bo-Bo doll before!) Thus, there is a degree of informational influence in the way someone looks to someone else – the child to the adult in the Bo-Bo doll study – to know what to do.

Bandura tried to re-label SLT Social Cognitive Theory in 1986 to emphasise the cognitive elements of the theory; but the new name largely failed to catch on.