Classical Conditioning, the first school of  Behaviourism, is learning by association – ie: associating one thing with another. The formula is shown in the graphic below.

NS = Neutral Stimulus
The neutral stimulus on its own is one that does not normally trigger any notable response.

The conditioned response is thought to be labile  – ie: it is not permanently established as a  response. Often the CR will last not much longer than the exposure to the conditioned stimulus.)

The concept of Classical Conditioning originated from the work of Ivan Petrovich Pavlov (1902/1927). Pavlov was investigating how much dogs salivated – the salivary reflex – when they smelled food. Pavlov exposed part of the salivary gland in a a dog’s cheek and then attached a capsule to the cheek to measure salivary flow. 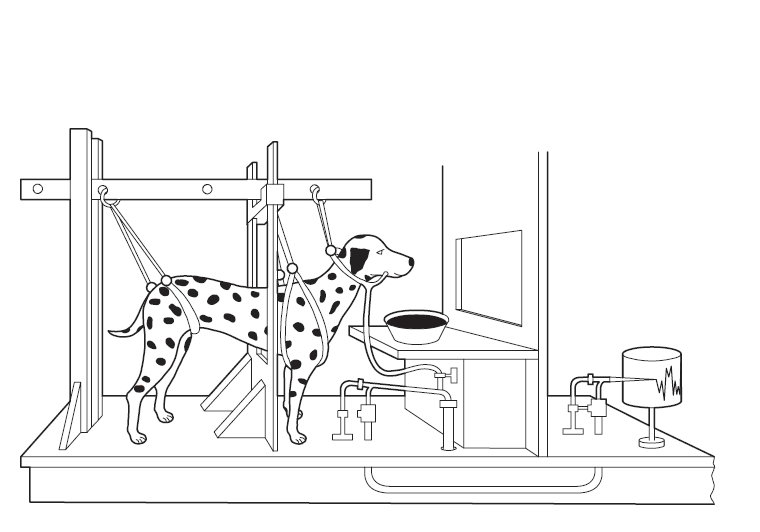 Pavlov devoted much of the rest of his career trying different sounds and sights (such as bells/buzzers and  flashing lights) and varying time intervals to test the strengths and effects of associations.

He found that usually it took repeated pairings of the UCS and the NS for the NS to become a CS.

The only personal characteristic of the dogs that seemed to affect how well and how quickly they could become conditioned was what Pavlov termed ‘excitation’ and ‘inhibition’ which he attributed to their ‘nervous type’. More excitable dogs conditioned more easily than more inhibited dogs. (In humans this would translate into where they were on the Extraversion Dimension of Temperament.)

Eg: if a dog trained to salivate at the sound of a bell was repeatedly exposed to the bell sound without the presence of the smell of food, eventually the dog would stop salivating. Ie: the conditioned response had become extinct. However, Pavlov found that spontaneous recovery of a supposedly extinct behaviour can occur for no apparent reason. The behaviour may not have been unlearned. It  may just have become dormant.

For instance, Pavlov found that a dog taken out of the experiment and then brought back later, might salivate spontaneously at the ringing of  the bell. Pavlov also found that it was much easier to retrain a dog in which the CR had become ‘extinct’ using the original NS-UCS pairings.

It makes sense, that, if we are bitten by an adder, for example, we  learn to avoid similar-looking snakes in case we get bitten again.

Stimulus discrimination occurs where there is no response to a stimulus that is dissimilar to the specific conditioned stimulus.

Pavlov found that, if he presented repeatedly  two tones – one paired with food, the other not – the dog, after being trained to salivate at the first  tone, would salivate at the second. Ie:  generalisation is taking place. However, after a while, the dog stopped salivating at all to the second tone. Ie: it had  learned to discriminate between the two tones.

The role of expectation
In conditioning, is there a prediction – an expectation of the UCS/UCR?

Although the idea of ‘expectation’  – a schema – is a mental concept foreign to Behaviourists, Leon Kamin (1969) demonstrated the critical role expectation plays in Classical Conditioning.

Kamin trained one group of rats to fear light paired with electric shock. This group and  another, untrained group were then exposed to a light/tone combination followed by electric shock. The second group responded with fear to the tone alone but the first group did not. Kamin  came up with the notion that the first group blocked the tone-predicting-shock effect because they had already become fearful due to the association of shock with the light. Robert Rescorla & Allen Wagner (1972) put forward the idea that conditioning depends on there being a discrepancy between the expected reinforcement and the obtained reinforcement. For Kamin’s first  group of rats, the light fully predicted what would follow – ie: the shock. The addition of the tone added no discrepancy between the expected and the obtained reinforcement and, therefore, had no conditioning effect.

Thus, there is a cognitive element to the way Classical Conditioning works – what ever the dogma of the Behaviourists!

Phobias
The acquisition of phobias is just one of many human phenomena that Classical Conditioning seems able to explain. John B Watson & Rosalie Rayner (1920) were the first researchers to demonstrate how a phobia could be acquired in a human (baby). The film below of part of their ‘Little Albert’ experiments illustrates their basic methodology.

There are many problems with the Little Albert studies but they do seem to demonstrate that humans can acquire phobias through Classical Conditioning. Lars-Göran Öst, Jan Fellenius & Ulf Sterner (1991) strongly support this view. One classic study they quote as evidence is that of D J Munjack (1984). He found that about 50% of the car phobics he studied had either frightening experiences of being driven poorly/dangerously or had actually been in a car crash.

However, Orval Hobart Mowrer (1947), while accepting that Classical Conditioning was the route of phobia acquisition, proposed that the phobia was maintained through Operant Conditioning. Avoiding the phobic stimulus to minimise the fear response is – which most people with phobias do – is negative reinforcement.

‘Preparedness’
Why is it easier to become conditioned to some things – eg: developing phobias – than others?

John Garcia, Frank Ervin & Robert Koelling  (1966) found that rats needed only one trial with a toxic drink that made them ill to have learned to avoid that drink in the future. Rats normally have a strong preference for sweet-tasting food. Garcia, Ervin & Koelling gave some of their rats saccharin-flavoured water, followed by a drug that caused intestinal illness several hours later. The rats needed to be sick only once to avoid drinking the water again.

Garcia et al’s findings were so unique at the time that they had trouble getting them published and accepted!

In a later study J0hn Garcia, Kenneth Rusiniak & Lynda Brett (1997) fed coyotes and wolves mutton wrapped in raw sheep hide and laced with (toxic) lithium chloride. The (hungry) animals were then allowed to  approach live sheep. The coyotes sniffed their prey and turned away, some of them retching. The wolves initially charged the sheep. When their mouths closed on the sheep’s flanks, they immediately released their quarry. During the next half hour, the sheep became increasingly dominant and the wolves withdrew like submissive pups.

In the natural world, learning to avoid food that would make you ill would be a critical  lesson to learn.

Martin E P Seligman (1971) put forward the concept of preparedness – the tendency for  members of a certain species to be biologically predisposed to acquire certain conditioned responses to stimuli which might be significant in their environment. Stimuli which are less likely to be encountered in their environment would be harder to create a conditioned response to. Eg: rats learned to associate saccharin-flavoured water with illness produced by X-rays but they did not learn to associate the light and sound of the X-ray machine with the illness.

Seligman’s concept, like Kamin’s, is predicated on there being a cognitive element in the way Classical Conditioning works.

Evaluation
A key problem with Pavlov’s research – and, thereby, the whole theory of Classicial Conditioning – is that, apart from excitation and inhibition, Pavlov made out his dogs all reacted the same to the various stimuli. From this it is assumed that all humans can be conditioned similarly – though Hans J Eysenck (1967) stated that extraverts condition more easily than introverts. However, it has come to light that the dogs’ ‘personalities’ had a huge effect on how they responded to conditioning stimuli. Daniel Todes (2014, p495)) notes that the dogs’ traits tended to be described in terms such as “weak or strong, compliant or independent, passive or impressionable, aloof or sociable, modest or greedy, cowardly or heroic”.  Pavlov tried to map the dogs’ characteristics to the ancient Greek medical philosophy of the 4 Humours, popularised in the writings of the 2nd Century Roman physician Claudius Galen and recently revived by Wilhelm Wundt (1879). However, with an eventual catalogue of 23 ‘nervous types’, making sense of his data proved too much for Pavlov and attempts were made to expunge all references to ‘nervous types’ other than excitation and inhibition from academic publications (Matthew Adams, 2020).

Nonethess, while clearly there are multiple factors that will affect how and when someone is conditioned, there is no doubt that people do learn by Classical Conditioning. People do tend to associate one thing with another and respond accordingly – eg: feeling a compulsion to answer a mobile phone buzz and/or flashing light because it signifies communication; wearing perfume or aftershave because it is associated with sexual desirability . So the concept has strong face validity.

The effect of conditioning on attitude formation was demonstrated by Michael Olson & Russell Fazio (2001). Female participants, told that they were taking part in an experiment about ‘video surveillance’, were shown hundreds of paired words and images. Some of the pairings included ’Pokemon’ cartoon characters (NS) paired with either an emotionally ‘negative’ or ‘positive’ word or image (UCS). (Positive words included ‘excellent’ or ‘awesome’ and positive images included puppies and hot fudge sundae. Negative words included ‘terrible’ and ‘awful’ and the images included a man with a knife and a cockroach.) Each target pairing was repeated 20 times during the presentation. Afterwards the participants were asked how they felt about the Pokemon images. Those which had been paired with a positive UCS were rated more positively than those paired with a negative UCS.

Classical Conditioning may affect sexual preferences too. Todd Kippin & James Pfaus (2001) conditioned rats to ejaculate to the smell of only either lemon or almond. Prior to the conditioning, these males had been allowed to mate with females smelling of either lemon or almond and had shown no preference for either smell. However, after conditioning, the males showed a distinct preference for mating with females with the smell they had been taught to associate with ejaculation.

With regard to humans becoming conditioned, Matt Jarvis, Julia Russell & Dawn Collis (2008) cite an entry in The People’s ‘Dr Vernon Coleman’s Casebook’ (14/10/00) in which a lady wrote in saying that she and her boyfriend had made love to Barry White CDs every night for 2 months. At the end of the ‘experiment’, it didn’t matter where either of them was…if they heard any of those songs, they would become sexually aroused!

John B Watson, the founder of Behaviourism as a psychological discipline, was able to fashion an entire (and lucrative) second career from applying the principles of Classical Conditioning to advertising.