Home » Mental Health » What is Stress?

So what is stress?

As good a definition of stress as any comes from Richard Lazarus & Susan Folkman (1984): “…negative emotional and physiological process that occurs as individuals try to adjust to or deal with environmental circumstances that disrupt or threaten to disrupt, their daily functioning”.

Randolph Nesse & Elizabeth Young (2000) state that the first step to understanding the nature of stress is to understand how it enabled the earliest humans to cope with the immense and often very dangerous physical challenges they faced. Walter Cannon (1932) argues that, faced with a predator which threatened their life, human beings could either stand their ground, defend themselves and kill or ward off the predator…or they could escape by running away or climbing to safety. Their chances of survival would be increased if their minds and bodies changed in ways which improved their ability to do one or the other. In this sense, the stress fight-or-flight response is a survival mechanism employed by the BEIGE vMEME.

Stress as a biological response
From the Gestalt Cycle – in the graphic below and discussed more completely in The Process of Change – when our amygdala registers something that requires a response from us that will be taxing or challenging in some way, the hypothalamus releases noradrenaline (in its neurotransmitter form) to trigger the sympathetic branch of our autonomic nervous system (ANS). (This is sometimes referred to as the sympathetic adrenal medullary system or SAM.) Neurons of the sympathetic system travel to virtually every organ and gland in the body. 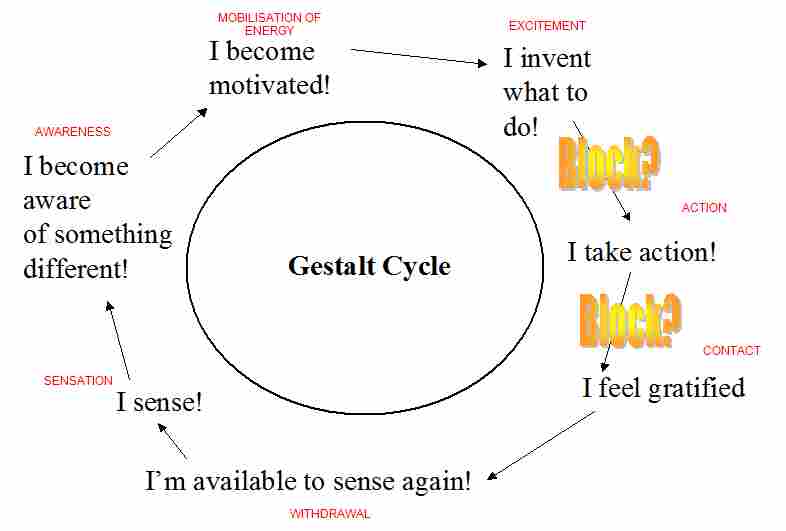 Graphic adopted from a format by Christopher Cooke 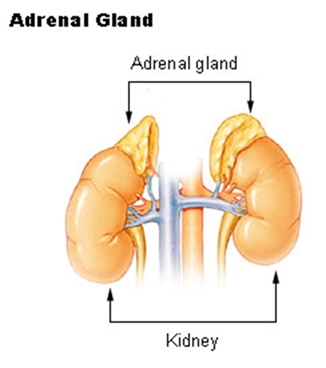 As a result of this the pupils enlarge to admit more light, the liver releases sugar for energy, and the adrenal medulla (the inner part of the adrenal glands) release  the hormones adrenaline and noradrenaline (aka epinephrine and norepinephrine) to prepare the muscles for action and power the sympathetic response. Breathing becomes deeper and more rapid to oxygenate the blood. Blood vessels dilate and contract, redirecting blood away from the digestive system – slowing it down – and towards the brain and muscles. Meanwhile the heart beats faster to aid that circulatory process. As a result of which, the muscles tense for action. Perspiration acts as a cooling mechanism for muscle activity raising body temperature. ‘Butterflies’ in the stomach and a dry mouth from the lessening of salivation may be side effects of these dramatic changes in the body’s physiological state.

Endorphins are released to block pain and additional blood platelets are produced so that blood can clot more easily in case of injury.

After the immediate shock of the fight-or-flight response, the parasympathetic branch of the ANS kicks in to try to calm things down. As shown in the graphic above, it works in exactly the opposite way to the sympathetic system to restore the body to a state of normal functioning (homeostasis) where all its systems are balanced. As digestion begins again as a result of parasympathetic action, this system is sometimes referred to as the body’s ‘rest and digest’ system.

If the stress is maintained for even a short length of time – say, over a couple of minutes – to compensate for the huge wear and tear on the body of the SAM response, the amygdala sets in motion the hypothalamic-pituitary-adrenocortical axis (HPA). This causes the paraventricular nucleus of the hypothalamus to produce hypothalamic hormones, most notably corticotropin-releasing factor (CRF). See the graphic below for an overview of the organs affected.

One of the most important hormones released from the anterior lobe of the pituitary gland due to CRF is adrenocorticotrophic hormone which stimulates the adrenal cortex (the outer part of the adrenal glands) to produce glucocorticoids, most notably cortisol. The glucocorticoids help to conserve glucose for neural tissues and stabilise blood glucose concentrations. They also mobilise protein reserves and conserve salts and water. Richard Gervitz (2000) has found that cortisol is important in reversing some of the body’s initial responses to stress, thus contributing to homeostasis. Cortisol levels usually peak at around 20 minutes from the initial perception of an acute stressor. Both the hypothalamus and the pituitary gland have special receptors that monitor circulating cortisol levels. If these rise too much, they initiate a reduction in CRF and ACTH levels, thus bringing cortisol levels down.

The criticality of glucocorticoids to the stress response was demonstrated by Blake Tyrell & John Baxter (1981) who found that additional quantities of glucocorticoid had to be given to people experiencing stress who could not produce the ‘normal’ quantities.

The cognitive element
The biological responses described above certainly describe the physical sensations of the stress response. However, it doesn’t take into account cognitive aspects influencing fight or flight.

Arguably the best model for understanding these aspects is Richard Lazarus’ (1976) model of stress as a transaction – see graphic below. The primary appraisal is concerned with the stressor – the stressing factor: is it a potentially positive or negative challenge and how positive or negative? The second appraisal concerns our ability to deal with the challenge. Do we have – or can we muster – the resources to cope? This question is concerned with what Albert Bandura (1977) calls self-efficacy – our ability to use our resources – and is closely connected to our self-esteem. How well our appraisal of our resourcefulness is matched to our appraisal of the strength of the challenge leads to our experience of the fight-or-flight syndrome. This is connected with our sense of hardiness.

Lazarus’ model fits nicely with the Gestalt Cycle. Knowing what to do – from the secondary appraisal – and being able to do it will reduce the experience of stress as a physiological response.

The transactional model has the advantage of accounting for individual differences in both the way the stressor and the context in which it occurs are perceived and the individual’s perception of their inner resourcefulness in responding to the stressor and its context. How someone sees both the stressor and their own ability to deal with it is likely to be strongly influenced by whichever vMEMES are dominating in their vMEME stack.

It is possible that elements of what we understand the physiological stress reaction to be are related to the functioning of vMEMES and their shifting under pressure. Clare W Graves (1971/2002) found noradrenaline to be significantly more present than adrenaline when someone was dominated by RED in their thinking but adrenaline to be significantly higher than noradrenaline when BLUE was utmost. In fact, on one occasion Graves (1978/2005) even shifted a volunteer’s thinking from RED to BLUE by injecting him with adrenaline. As the adrenaline was burned up, the volunteer’s thinking centred again around RED. It seems Graves had artificially created temporary vMEMETIC change.

The relationship of stress hormones to motivational thinking is barely understood at all. Nonetheless, Graves does point in a direction for further research.

In fact, quite why we should have get physiologically stressed in the way we do for problems at more complex levels than survival issues – eg: work problems, exams, relationship issues, etc – is something of a mystery. The concept of genome lag – the failure of the human genome to adapt in certain respects to very different environmental conditions from those 35,000 years ago – has been put forward as an explanation. However, while genome lag is a plausible theory, it is far from being a comprehensive explanation. Clearly the physiological stress reaction is appropriate at some times and inappropriate at others.

Also minor excitation of the sympathetic system can be positively helpful at times. Who would not want to be a little excited on a first date with someone you find very attractive? Doesn’t everybody want to feel at least a little energised when facing an important exam? Hans Selye (1974) called such low-level positive stress ‘eustress’ and believed it was essential if we were to remain alert and interested in life. Douglas Bernstein et al (1997) stated that moderate levels of short-term stress “can be stimulating, motivating and desirable”. Mihaly Csikszentmihalyi (1990) has identified that entering the fine zone between being bored and being anxious is critical for achieving the optimal peak performance he calls ‘flow’ in athletic, artistic and/or intellectual endeavours.

Acute and chronic stress – the differences
Further to the idea of eustress, acute stress – ie: short-term stress – can be highly beneficial in enabling someone to deal with a challenging situation. This was demonstrated in a 1994 study by Phil Evans et al. The researchers arranged for students to give talks to other students (mild but acute stress). These students showed an increase in sigA, an antibody which helps protect against infection. Evans et al also found that sigA decreased in students during lengthy examination periods lasting several weeks.

Support for Evans et al’s position on short-term stress comes from the work of Douglas Delahanty et al (1996). Their participants performed a mental arithmetic task while being harrassed, immersed their hand in cold water at 3°C or read magazines. Natural killer activity was greater during the 2 stressful tasks than during the control task (reading magazines), suggesting some enhanced functioning of the immune system.

Such findings are confirmed by Suzanne Segerstrom & Gregory Miller’s 2004 longitudinal meta-analysis – 293 studies over 30 years – in which they found that short-term acute stressors can boost the immune system, prompting it to ready itself for infections or other challenges to the integrity of the body.

How both chronic stress – and sometimes acute stress – can be detrimental to health is explored in Stress & Illness. Whether some people are more likely to become stressed than others is considered in Vulnerability to Stress. Occupational stress is considered in Workplace Stress.