The workplace is commonly acknowledged as one of the most stressful environments most of us have to deal with. Yet, ironically, stress is one of the most common causes of absenteeism from the workplace. According to a 2019 Business in the Community report, 61% of employees have experienced a mental health problem due to work and one in 3 have been formally diagnosed with a mental health issue.

So what actors affect occupational stress  and how?

Noise in the Environment
Many workplaces, particularly in construction and manufacturing, are noisy – often to an unsafe level, requiring ear defenders. But even an open plan office can be noisy.

David Glass, Jerome Singer & Lucy Friedman (1969) carried out an investigation in which participants had to carry out tasks under 5 conditions:-

What the researchers found was that the participants performed best under the no noise condition and worst for random loud noises – showing how disruptive unpredictable noise can be.

However, Philip Banyard (1996) cautions that it is difficult to separate noise out from other stress factors. For example: how much someone is able to tolerate noise will be influenced by where they tend to locate on the temperamental dimension of Extraversion. Those who are more introverted tend to want to reduce external sensory input such as noise because they have more than enough stimulation from the ascending recticular activating system. Extraverts tend to receive not enough stimulation and, therefore, they seek external sensory input to fill what can seem like a void in their internal activity. A personal anecdote…a few years back a young woman on one of my training courses told me that she had taken a ‘personality test’ which found her to be an ‘extreme  extrovert’; she said she found silence physically painful and had to create noise – eg: turning on the radio – to relieve the aversive state. So introverts tend to find ambient noise unpleasant whereas extraverts enjoy it and may actively seek it.

Job Strain Model
Robert Karasek’s Job Demand Control Model (1979) – also known as the Job Demand Control Model – posits that the most stressful work situations are those where the worker is under pressure (high demand) but has little control over the work in order to manage how and when it is done. Karasek holds that workers, who have demanding jobs, experience a lot of stress if they cannot decide when and how they do the work. As soon as  control becomes less, the workload will feel higher, leading to stress. In jobs where work is controlled by schedules and deadlines, workers experience a lot more stress than when they can decide their own time schedule. Having autonomy in decision-making is, therefore, much more important in minimising the development of stress than the complexity and high demands of the tasks. Karasek’s model is outlined in graphic form below:- 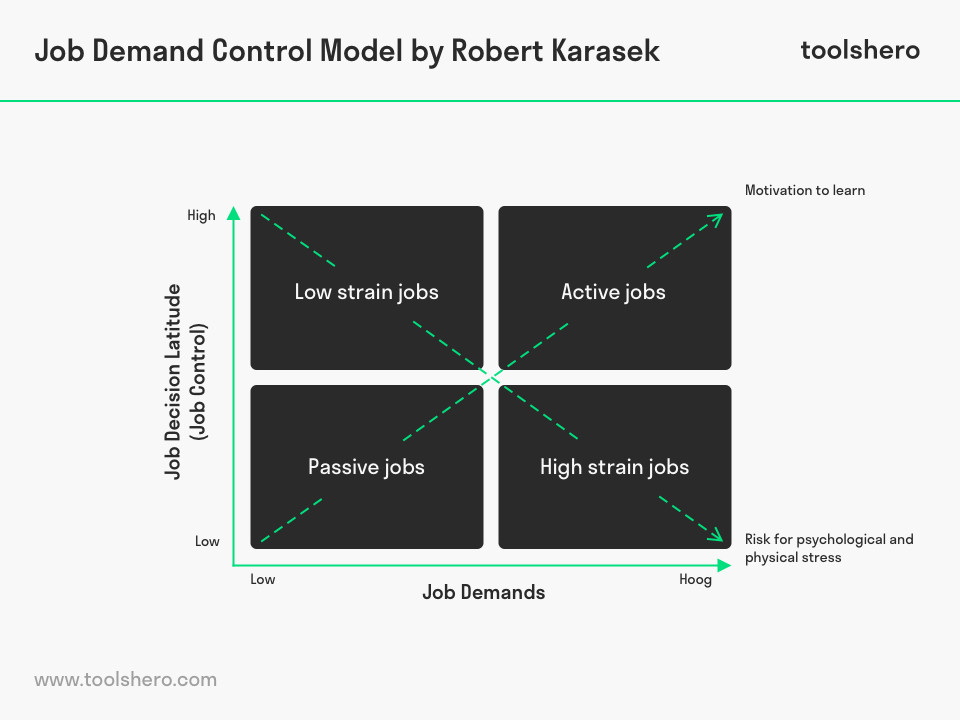 The key factor in  minimising occupational stress, according to Karasek is decision latitude – how much control the individual worker has.

Michael Marmot et al’s classic 1997 study of 10,308 London-based civil servants aged 35-55 (6895 men – 67%; 3413 women – 33%) support the Job Strain Model. This investigation was part of the Whitehall studies in which a number of different psychosocial characteristics of work were investigated to test their association with illness. A longitudinal study over 3 years, it focused on the negative correlation between job control and stress-related illness. Marmot et al found civil servants with low job control were 4 times more likely to die of a heart attack than those with high job control. They were also more likely to suffer from other stress-related disorders such as cancers, strokes and gastrointestinal disorders.

Another classic study which supports the Job Strain Model is that of Gunn Johansson, Gunnar Aronson & Bjorn Lindström (1978). They found that finishers on a production line in a Swedish saw mill were stressed by having the pace of their complex and skilled work set by machine and having no control over that. Although the sample was decidedly small – just 14 finishers – 2 factors make this a particularly-interesting study. Firstly, there was a distinct psychological pressure the finishers were under: their managing to meet the machine-determined work schedule determined the overall pay of everyone on their production line. If they failed to meet their targets, everyone 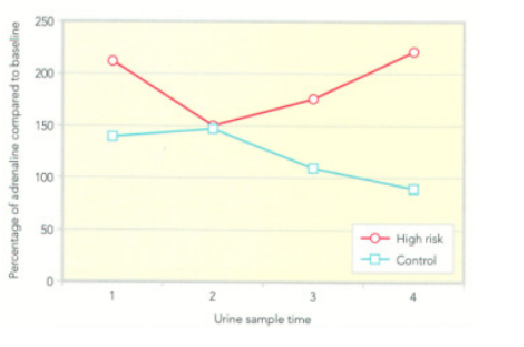 on the production line suffered. Secondly, biological measures were used to determine how the pressure they were under related to the production of stress hormones. Each finisher was asked to give a urine sample on getting up in the morning (the baseline), on arrival at work  and at 4 other times each day.  The researchers tested the urine for adrenaline and noradrealine as measures of sympathetic arousal. In the first urine samples of the day – see chart left -the finishers had adrenaline twice as high as their baselines and these continued to rise overall after  some drop. In comparison, a control group of 10 maintenance workers had a peak level of 1.5 x their baselines in the morning and this declined during the rest of their shift.

Not all research supports control being more important than demand. Lester Breslow & Philip Buell (1960) studied over-45s in light industry working over 48 hours per week and found they were twice as likely to develop chronic heart disease (CHD) as those working 40 hours or less. A meta-analysis of 14 studies by Mika Kivimäki et al (2006), involving more than 80,000 workers from Europe, Japan and the US found workers with high workload were significantly more at risk of developing CHD.

Paradoxically perhaps, Cary Cooper & Michael Smith (1985) found that too little work could have a negative effect, with workers feeling understretched and undervalued. Even more paradixically, Laurenz Meier et al (2008) found too much control could be stressful if the individual was low in self-efficacy – ie: they didn’t believe they had what it took to do the job. This shows the power of schemas – what people believe about themselves in relation to the demands of their situation and ties in with Richard Lazarus’ (1976) model of stress as a transaction.

Christina Györkös et al (2012) carried out a cross-cultural literature review and found that lack of job control was more of a problem for workers in individualistic cultures than collectivist cultures. Control was seen as far less desirable by workers in China and other Asian cultures than in the USA and the UK, for example. Interestingly,  Cong Liu, Paul Spector & Lin Shi (2007) found no significant cultural difference with regard to perception of workload. Their study found workload was rated the third most stressful workplace stressor in both individualist and collectivist cultures.

Work relationships
Relationships at work are the most common source of work-related stress, according to Michael Matteson & John Ivanoevich (1982).

Robert Karasek et al (1982) report job satisfaction is related to support from colleagues while those who work in social isolation are likely to have higher levels of adrenaline and noradrenaline (Cary Cooper & Judi Marshall, 1976) – though this factor is likely to be mediated by how introverted or extraverted the individual is.

In findings that are clearly linked to the Job Strain Model, Bruce Margolis & William Kroes (1974) found middle managers, foremen and supervisors were 7 times more likely to develop gastric ulcers as shop floor workers. These workers, caught between senior management and the general workforce  have high job demand but limited authority and decision-making. A Shiron (1989) reported a significant correlation between such perceived role conflicts and CHD.

Workplace bullying is, of course, a major problem, both in terms of managers foremen and supervisors bullying workers but also workers bulling other workers. M Angervold & E G Mikkelsen (2006) undertook an important study of 186 blue collar employees from a Danish manufacturing company. Bullied workers reported significantly more symptoms of psychological stress and mental fatigue than non-bullied workers. The results showed significant differences in the bullied and non-bullied ratings of psychosocial factors such as job control, management style, role clarity, social climate, social contact and work centrality. Angervold & Mikkelson were able to correlate the responses to departments with high, medium or low levels of bullying. However, when  the researchers removed  the bullied from the statistical analyses with regard to the perceived psychosocial environments, the same departments could be differentiated only on the basis of rated job demands and management style.

Management style, however, can be a real issue. Individuals driven by the RED vMEME often gravitate to power but – especially if they are high in Psychoticism – are likely to display aggressive behaviour – the type of hostile behaviour often typical of Type A ‘personalities’ – see Vulnerability to Stress. For subordinates – especially if they are high in Neuroticism – this can cause real anxiety, producing high levels of stress and eventually Depression.

Burnout
In the end occupational stress can result in ‘burnout’. This is characterised by Christina Maslach & Susan Jackson (1982; 1984) as including