Stress can make you ill! Stress can even kill you!

Selye noted that the rats in his experiments and hospital patients showed a similar pattern which he termed the General Adaptation Syndrome (GAS) because it represented the body’s attempts to cope in an adaptive way with stress. GAS has 3 stages – see graphic below.

Stage 1 involves increased activity in both the SAM and the HPA systems. In the case of elongated stress, the Alarm reaction occurs 6-48 hours after the trigger of fight or flight and includes loss of muscle tone, drop in body temperature and decreases in size of the spleen and the liver.

Stage 2 involves the body adapting to the demands of the environment, with activity in the HPA. As this stage proceeds, the parasympathetic system requires more careful use of the body’s resources to cope. The system is being taxed to its limits, with an increase in the size of the adrenal glands and a decrease in certain pituitary activity such as the production of growth hormones. If the stress is not too great, the body may return to a near normal state of homeostasis.

Stage 3 sees the physiological systems used in the previous 2 stages becoming ineffective due to very prolonged stress. The initial ANS fight or flight syndrome reoccurs. In extreme cases, the damage to the adrenal cortex leads to failure of the parasympathetic system and collapse of the immune system. Stress-related diseases – eg: high blood pressure, asthma, heart disease – become more likely. Anthony Curtis (2000) not only confirmed these links but added headaches, infectious illnesses (such as influenza) and rheumatoid arthritis to the list.

John Wayne Mason (1975) has heavily criticised Selye for claiming that stress always produces the same physiological pattern. Mason noted reactions to stressors producing different levels of fear, anger and/or uncertainty and, correspondingly, different patterns of adrenaline, noradrenaline and cortisol secretion. Mason also criticises Selye for assuming people always respond in a passive way to stressors. He argued that there is an active process of psychological assessment when people confront a stressor – fitting with Richard Lazarus’ (1976) concept of stress as a transaction. Joe Bosch et al (2001) state that ‘active stress’ is better than ‘passive stress’because it produces more of the antibody IgA. Thomas Symington et al (1955) demonstrated the link between psychological stress and physiological symptoms by comparing a group of comatose dying patients who showed very few signs of physiological stress to a conscious group who knew only too well that they were dying and showed a wide and intense range of physiological stress symptoms. Selye has also been criticised for not fully differentiating between the SAM and HPA systems – although he was the first researcher to really focus on the HPA. His experiments on rats have been heavily criticised on ethical grounds for exposing them to ‘acute nocuous agents’ – namely cold, surgical injury (such as severing the spinal cord), excessive exercise and sub-lethal doses of various drugs.

For all the criticisms of Selye, GAS remains in large part applicable to many people’s experience of prolonged stress.

Ulcers
Ulcers are often thought to be the result of stress.

According to John Pinel (1996), the stress response often increases the secretion of hydrochloric acid which plays a role in the development of some stomach ulcers. The stress response also weakens the defences of the gastrointestinal tract against this acid, making it possible for gastric ulcers to develop.

Strong evidence for the link between stress and ulcers comes from the work of Joseph Brady (1958). He first placed rhesus monkeys in ‘restraining chairs’ and conditioned them to press a lever. They were given electric shocks every 20 seconds unless the lever was pressed at the same time. Many of the monkeys suddenly died from ulcers caused by raised gastrointestinal hormone levels. To test whether the ulcers were due to the shocks or to the stress, Brady used ‘yoked controls’. One monkey, the ‘executive, was responsible for controlling the lever to stop the shock while the second, yoked monkey could only receive the shocks, having no control over the lever. Thus, only the executive monkey had the psychological stress of making the decision – though both monkeys received the shocks. 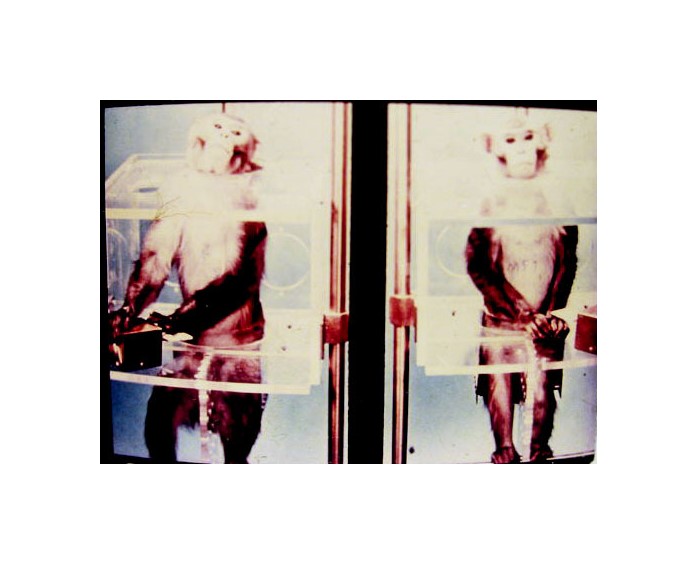 From this, Brady concluded that it was clearly stress and not the shocks which created the ulcers. He also concluded the greatest danger occurred when the sympathetic system stopped being aroused, leading to a ‘parasympathetic rebound’ in which the stomach was flooded with digestive hormones.

Although this was an experimental study with non-human animals, Brady believed the results could be applied to humans, with too much stress at work having the potential to lead to ulcers. However, a number of researchers are sceptical about the application of Brady’s findings. Prominent among them is Keith Payne (2013) who debunks what he calls ‘the myth of executive stress’. He points out that monkeys are not humans and learning to avoid a painful electric shock is not the same as making a complex business decision. Indeed, it is lack of control rather than having control which repeatedly shows as stress factor in workplace stress.

Nontheless the debate continues because executives and air traffic controllers have the highest incidence of ulcers. How much that is related to the stress they experience is the moot point.

The argument also omits the role of individual differences. A 1957 study by Herbert Weiner et al tested army recruits prior to basic training and categorised them either as ‘oversecretors’ or ‘undersecretors’ of digestive enzymes. After 4 months of stressful training, 14% of the oversecretors had developed ulcers but none of the undersecretors had.  While this study supports the notion that the stress response can precipitate the development of ulcers, it also points clearly to individual differences having an impact on how likely someone is to develop ulcers as a response.

Cardiovascular disorders
There are a number of ways stress can have a negative effect on the heart and vascular systems.

For one thing, adrenaline constricts blood vessels which can trigger a heart attack in extreme stress response situations. Even in less extreme situations repeated stress responses leads to abnormal wear and tear in the delicate lining of the blood vessels. Ute Wilbert-Lampen et al (2008) found that incidences of Germans having cardiac emergencies rose by 2.66 on days when Germany played in the 1996 World Cup.

Hypertension occurs when someone has experienced raised blood pressure consistently for several weeks. It is a major risk factor for coronary heart disease. The development of hypertension has been linked to a number of factors such as obesity, too much salt, caffeine and/or alcohol, lack of exercise, inherited predispositions and psychosocial factors such as stress, anger and hostility. Some researchers maintain stress has little effect on blood pressure except for those already high. However, there are studies which indicate there is a link. For example, Sidney Cobb & Robert Rose (1973) found a link between stress and hypertension in a study of air traffic controllers. The researchers analysed annual medical records and found that hypertension rates were several times higher in the air traffic controllers than a comparative control group. They also found that those controllers working in airports with greater traffic density had higher levels of hypertension.

Artherosclerosis, the ‘furring up’ of the areteries, can add to real and potential heart problems as triglycerides may stay in the blood longer due to stress (Catherine Stoney, 2002) Poor diet – often a social factor in the negative effects of stress – is often associated with raised cholesterol levels, leading to artherosclerosis.

Immune system suppression
Put simply, the immune system works via cells distributed through the body to identify and destroy intruders to the body which create disease. The cells within the immune system, leucoytes (white blood cells). identify and destroy antigens such as viruses. The presence of antigens causes antibodies to be manufactured which assist the leucocytes in fighting off future infections. Types of leucocytes include T cells, B cells and natural killer (NK) cells.

Unfortunately an overabundance of glucocorticoids through extended HPA activity can suppress the immune system – especially the production of cytokines which are involved in moderating immune responses.  Endorphins, which act as a natural opiate and decrease sensations of pain, also suppress activity in the immune system – especially the production of NK cells. Extended HPA activity can slow wound healing through the anti-inflammatory action of glucocorticoids.

Evidence for the diminution of immune system functioning from chronic stress is fairly extensive.

One such study is that of Steven Schliefer et al (1983). The researchers found that the immune systems of men whose wives had died of breast cancer functioned less well after the death of the wife, compared to pre-death functioning.

Janice Keicolt-Glaser has been a key researcher into what is termed ‘immunosuppression’. One of her more famous studies (Janice Kiecolt-Glaser et al, 1984) concerned 75 medical students – 49 male and 26 female. Blood samples were taken one month before their final 1st year exams (low stress condition) and then on the first day of the exams (high ongoing stress). NK cell and T cell activity was significantly lower in the second blood sample, indicating the immunosuppressant effect of stress. Moreover those students who had suffered more negative life events in the recent past and/or who had few friends to confide in had the lowest NK activity,

These studies certainly show a correlation between stress and deterioration in immune system functioning. However, they do not show a direct link between stress, poor immune system performance and illness. One that does is that of Sheldon Cohen, David Tyrrell & Andrew Smith (1991). The researchers had 394 participants complete questionnaires on the number of life events they had experienced in the previous year. They also rated their degree of stress, level of negative emotional states (eg: ‘depressed’) and how ‘out of control’ they felt. The 3 scores were combined into what the researchers termed a ‘stress index’. The participants were then given nasal drops containing cold viruses, leading to 82% becoming infected with a cold virus. After 7 days, the number whose infection had developed into a clinical cold was recorded. Participants with the highest level of stress were found to be 2x as likely to develop colds as those with a low stress index score. While Cohen et al took no direct measures of immune functioning, unlike several of Kiecolt-Glaser’s studies, their participants did actually become ill, with levels of stress being correlated to the likelihood of becoming ill. Thus, the researchers concluded that life stress and negative emotions reduce the effectiveness of the immune system, leaving such people less able to resist viral infections.

The same year Phil Evans & Nick Edgerton found that the probability of developing a cold was significantly correlated with negative events in the preceding days.

Kiec0lt-Glaser (Janice Kiecolt-Glaser et al, 1995) has also evidenced the effect of stress on slowing wound healing. Wounds were given to women who cared for senile relatives and a control group of women who didn’t. The carers’ wounds took longer to heal.

Illness caused by stress…?
Evans (Phil Evans, Angela Clow & Frank Hucklebridge, 1997), however, cautions against making oversimplified assumptions about the relationship between stress and illness. Moreover, Elizabeth Bachen, Sheldon Cohen & Anna Marsland (1997) posit that the changes in immune functioning identified in this type of research are usually within the ‘normal’ range which makes concluding those changes increase an individual’s chances of developing an illness as a result debatable.

Richard Lazarus (1992) makes the point that health and ill health are far too complex to be dependent on just stress levels – with genetics and general lifestyle arguably playing far bigger roles than exposure to stressors.

Also individuals sometimes respond differently to the same stressors indicating that there is a complex relationship between ‘personality’ and stress.