ART 2
Life events and stress
For most people life can be very challenging at times. Everybody experiences major ‘life events’ or ‘life changes’ which can prove acutely stressful and bring about illness – eg: marriage, divorce, death of a close friend or family member, etc, etc. Even Christmas can be acutely stressful!

And stress-related illness can contribute to further illness. 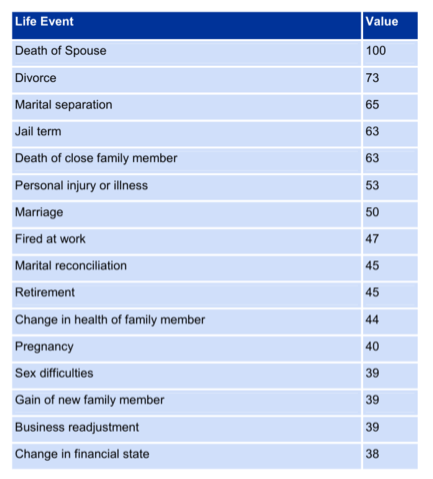 The idea of ‘life events’ causing stress to the point of illness had begun in 1919 with the ‘life chart’ work of Adolph Meyer. His work became the foundation for the Schedule of Recent Events developed by N G Hawkins, R Davies & Thomas Holmes in 1957; this looked at the cumulative effect of life events in causing stress. (Amusingly Holmes’ interest in the relationship between stress and illness came from finding his mother-in-law’s visits so stressful that he developed a cold every time she came to stay!) In 1967 Thomas Holmes & Richard Rahe added the idea of the magnitude of different life events – measured in ‘life change units’ (LCUs) – to get a more precise understanding of the cumulative effect. They examined the medical records of over 5,000 medical patients as a way to determine whether stressful events might cause illnesses. 100 independent judges were asked to tally a list of 43 life events based on a relative score. They started off by allocating 100 LCUs to the death of a spouse and, rather arbitrarily, 50 to marriage. From that simple structure they graded the remaining 41 life events. A positive correlation of 0.3 was found between their life events and their illnesses. And, thus, the Schedule of Recent Events became the Social Readjustment Rating Scale (SRRS). A sample of the 43 events with their allocated LCUs are illustrated in the graphic left.

Richard Rahe et al (1972) have suggested the following scale to be applied to accumulated LCUs  in a year:-

Most studies into the relationship between stress and illness in the 1950s and 1960s – eg: William Greene (1954), William Greene, Lawrence Young & Scott Swisher (1956), Richard Rahe et al (1964) – were carried out retrospectively – ie: the participants were already hospitalised with illness. So the participants’ memory of stress factors which might have contributed to their illness may have been coloured by the very fact that they were now ill.

Richard Rahe, Jack Mahan & Ransom Arthur (1970) wanted to conduct a prospective study – ie: to predict illness as a result of stress factors. They asked 2,684 American naval men to complete an SRRS specially customised for navy personnel The questionnaire was used to assess the stressful life events each man had experienced over 4 consecutive 6-month periods in the lead-up to their deployment on one of 3 navy cruisers. Each stressful factor was assigned an LCU weighting that indicated the severity of the source of stress. A total LCU score was calculated for each of the 4 6-month periods prior to embarkation.

On board any illness, no matter how trivial, had to be recorded by the ship’s medical facility. When the data on health was analysed, any sickness believed to be motivated by a desire to avoid work was discarded – as were any reports of pre-existing conditions. The remaining information on the number, type and severity of new health problems was used to produce an illness criterion.

The only significant correlation found – r = 0.118 – was between the LCU total for the 6 months prior to departure and the illness score. Consequently only the data relating to the final pre-departure 6 months was used in subsequent analyses. Overall totals were calculated by putting participants in order of highest to lowest LCU and dividing the list into 10 bands (each 1/10 of the ship’s crew). When divided up in this way, 2 of the ships showed large differences but one was not so great. So the data for all 3 vessels were combined which obscured the variations between the third ship and the others. Clearly this was a fudge. Also the correlational coefficient found by Rahe, Mahan & Ransom – r = 0.118 – was quite low, only the sheer size of the sample group making such a low correlation statistically significant. In other words, Rahe et al could only find a weak association between life events and stress to the point of illness. Cause-and-effect most definitely cannot be inferred from this study.

However, another prospective study by Madhulika Gupta & Aditya Gupta (2004) supported Rahe et al in terms of both reliability and validity – the Guptas finding a significant correlation between life events causing stress and the deterioration of skin disorders (such as scalp itching).

A disturbing report from T J Jacob & E Charles (1980) found children with cancer tended to be from families with higher life change scores than children with other illnesses. This suggests a link between stress and vulnerability to cancer and that certain illnesses are more influenced by stress than others.

Of course, the SRRS is a self-report measure which leaves it open to all kinds of attribution biases and other cognitive biases.  A 1991 study by Karen Raphael, Marylene Cloitre & Bruce Dohrenwend illustrates the inherent dangers of self-reporting: when women, asked to report stressful events each month over a 10-month period, were asked to recall the events again at the conclusion of the study, only 1/4 of the originally-reported categories appeared.

How a life event is perceived – and whether positively or negatively – can vary massively from individual to individual and from context to context. For example, a woman’s reaction to finding she is pregnant may depend on whether the pregnancy is planned or unplanned, her relationship with the prospective father and how viable raising a child is in terms of finance, etc. How someone copes with a life event will be strongly influenced by the values they have about the event. The memes of a culture or sub-culture about that kind of event will also be a factor in whether the event  is viewed positively or negatively.

For all the problems with the SRRS – not least the subjectivity involved in its creation! – it, in several different versions, has stood the test of time as a cumulative measure of how the stress caused by life events can lead to illness.

Daily hassles and daily uplifts
Richard Lazarus (1990), however, has suggested that ‘daily hassles’ – minor daily stressors – such as being unable to locate the car keys when leaving for work – are a more significant source of stress for most people – as most people experience life events fairly rarely. In 1999 he suggested that it is the accumulation of daily hassles, one on top of the other, which can then result in more serious stress reactions such as anxiety and Depression. There is also the notion that daily hassles can massively amplify the effect of a life event so that the irritation of the daily hassle is that much greater than would be reasonably expected. Eg: a mother going through a divorce might find the minor squabbling of her children completely unbearable. 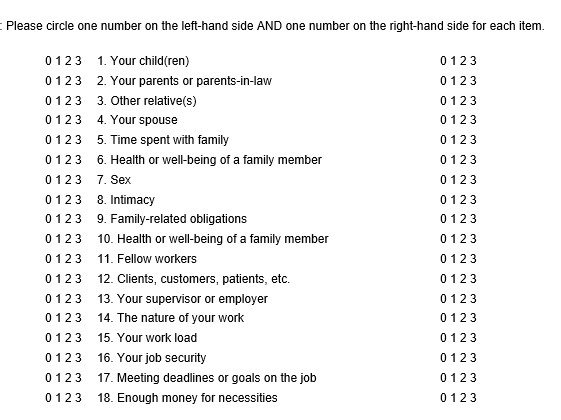 Richard Lazarus, Alan Kanner & Susan Folkman (1980) came up with the Hassles & Uplifts Scale (HSUS) – the intention being to measure ‘daily uplifts’ (the little things that are pleasing) as well as daily hassles. One of the benefits of this approach is that it can be used in counselling & therapy – especially in CBT – to help clients get a more balanced view of what is going on in their lives.

The following year Alan Kanner et al, from administering the HSUS to 48 men and 52 women aged 45-67, found a strong negative correlation between frequency of hassles and psychological well-being – ie: those with the fewest hassles had the highest levels of well-being. The participants also took a life events scale and the researchers found that hassles were better predictor of well-being than life events. They also concluded that life events can produce hassles. Eg: divorce can lead to hassles such as  having to cook for yourself, handlng money matters, etc.

Kanner et al compared the hassles results with results from a sample of students who had different hassles such as too much to do and not enough time to relax. This reflects real life differences in priorities – giving the HSUS good ecological validity.

In 1988 Anita DeLongis, Susan Folkman & Richard Lazarus supported Kanner et al by assessing  the stress in 75 married couples and finding a significant positive correlation between hassles and next day health problems such as flu, sore throats, headaches and backaches. However, they found no relationship between life events and health.

From  a study with  160 men and 160 women G L Flett et al (1995) found that part of the reason daily hassles tend to produce more stress is the social and emotional support people undergoing major life events often receive. Moreover, people going through a major life event tend to seek support whereas people beset with hassles tend not to, Many people would be sympathetic and supportive of, for example, a friend whose father had just died; but many people would be dismissive of someone getting highly stressed because there were traffic jams on the way home from work.

Someone who is high in the temperamental dimensions of Neuroticism and/or Psychoticism is likely to get much more irritated by hassles than someone who is largely Phlegmatic in their temperament.

Lifestyle factors
Of course, lifestyle factors can both influence the experience of stress and the likelihood of stress contributing to illness. Smoking, too much alcohol, certain ‘recreational’ drugs and lack of exercise have all been associated in numerous studies with both increasing the likelihood of becoming stressed and exacerbating the stress experience itself.

The work environment can also be a major source of stress – which is considered in Workplace Stress.