Clearly some people become stressed more easily than others and some have the experience of stress – fight or flight  – more strongly than others. So what are the factors that influence these phenomena?

A vMEMETIC approach
One way of looking at this is to take a Maslowian viewpoint – ie: people have needs and having those needs unfulfilled causes stress. The vMEMES identified via the work of Clare W Graves are then the drivers to fulfil those needs.

Of course, Graves held that motivational system (vMEMES) emerge in symbiotic interaction with the life conditions in the environment – an internal response to external stressors and almost certainly the first emergence of a vMEME is an example of epigenetic modification. Graves’ position has been upheld completely by Chris Cowan (2004). However, Don Beck (2002a), with his concept of the prime directive, does imply that there is a maturational factor in the emergence of vMEMES. He has not said explicitly that vMEMES are programmed to emerge in sequence as someone develops through life, irrespective of the life conditions; but the implication that maturation matters is inescapable.

The position Beck appears to be working towards is perhaps best represented in the idea of ‘push & pull’ factors Lawrence Kohlberg (1963) put forward as leading the moral development of children in his Stages of Moral Development. Since Graves mapped his hierarchical systems to the stages of moral development Kohlberg identified, this seems an entirely valid direction to explore.

Strictly speaking, more in keeping with the theories of Sigmund Freud (1923b) than Graves, Kohlberg sees moral development as being driven by internal, maturational forces – ‘push’ factors. Yet Kohlberg and others working with his line of thought also have clear evidence that views on morality could mutate under pressure from life conditions – eg: discussion with influential others (Karen Maitland & Jacquelin Goldman, 1974) – the ‘pull’ factors which more support the orthodox Gravesian position. Since Beck himself, by saying that some people may ascend the Spiral with a discernible preference for one side or the other, effectively allows for the maturational factor, one suspects that Kohlberg pretty much had it right. Just when and how push happens is strongly influenced by pull – but push there is!

This means there is a sense in which the state of each vMEME forms part of the life conditions inside us – which reinforces the point Peter McNab makes in Aligning Neurological Levels – a Reassessment that what is happening to us – internally as well as externally – are equally part of the ‘environment’.

Once they have been activated in someone’s psyche, the vMEMES of the 1st Tier have needs which, in terms of Marie Jahoda’s (1958) concept of Ideal Mental Health, must be fulfilled for well-being. (It’s probably not appropriate to think of the 2nd Tier as having needs, since they are more about ‘being’ than ‘subsistence’ or ‘deficiency’ – though understanding of those vMEMES is still fairly limited.)

So what kinds of things stress vMEMES? Because what stresses the vMEMES dominating someone’s vMEME stack will affect seriously their ability to cope. 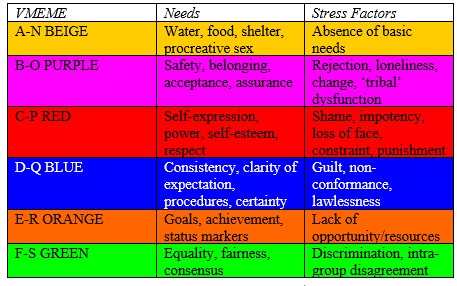 Eg: the young child whose PURPLE can’t find security at home. Say they come from a one-parent family in material deprivation where mother is a prostitute and a junkie. Home, with ‘clients’, pimps, dealers and other junkies on the scene and mother ‘blissed out’ a lot of the time is hardly likely to be a ‘safe place’. The child goes to school, their PURPLE looking for safety. But, BLUE is working ineffectually in the school so there is little discipline but a lot of RED bullying. Such C life conditions will not enable desperate O PURPLE to have its needs met but will rather result in the emergence of P RED. Only a RED that doesn’t have a sound PURPLE foundation on which to learn to express itself healthily. Not only is RED’s manifestation likely to be thoroughly unpleasant in such a scenario; but what does the child do about having its PURPLE safety-in-belonging needs met?

As both Maslow and Jahoda identified, for someone to be mentally healthy, they must have their needs met at each level.

Temperament
However, there may also be an inherent tendency towards the can or can’t cope attitude, deriving from the individual’s temperament. Eg: someone with a Melancholic temperament is more likely to believe and feel they can’t cope. Hans J Eysenck (1967) hypothesised that people high in the temperamental dimension of Neuroticism – a  key element in the Melancholic temperament – have a more responsive sympathetic branch of the body’s autonomic nervous system than others. Such people have a natural tendency towards Depression and anxiety and thus are more vulnerable to having a pessimistic appraisals.

Some people remain very calm during emergencies; some people feel considerable fear or other strong emotions; and some are terrified by even very minor incidents.

Eysenck suggested that people tending towards the Unstable end of the Neuroticism axis had a problem of ‘sympathetic hyperactivity’ in the amygdala, the hypothalamus and the hippocampus. These organs in the brain’s sub-cortical limbic system were originally identified by James Papez (1937) as the principal mediators of bodily arousal associated with emotion. More recently the pioneering work of Joseph LeDoux (1992; 1996) has emphasised the critical responses of the amygdala to alarming sensory stimuli. It stimulates the hypothalamus to create the physiological syndrome we call ‘fight or flight’.

From observations of timidity in domestic cats, Jerome Kagan, Steven Resnick & Nancy Snidman (1988)  put forward the notion that this sympathetic hyperactivity is due to having higher levels of noradrenaline which arouse the amygdala, So, effectively people high in Neuroticism are born with a limbic vicious circle: the amygdala is easily aroused by an excess of noradrenaline; and, when aroused, it stimulates the hypothalamus to make more noradrenaline!

‘Personality’ and stress
‘Personality’ is a much overused term – in fact, Arthur Reber & Emily Reber (2001) consider it “…a term so resistant to definition and so broad in usage that no coherent simple statement can be made.” However, a substantial number of key figures in the Psychology and Psychiatry – including Eysenck – have used the term in key theories.

One such area is the relationship between ‘personality’ and stress – and in particular how some ‘personality types’ are more vulnerable to stress and illness than others. Perhaps, then, to make sense of ‘personality’ in this context as to see it as a mix of temperamental traits and which vMEMES are dominating in the vMEME stack….

The ‘Type A’ personality’s relationship with chronic heart disease (CHD) was identified by Meyer Friedman & Ray Rosenman (1959) from a prospective, longitudinal study of nearly 3,200 self-selected male participants, between the ages of 39-59 and living in the San Francisco Bay Area. The participants were healthy at the outset, having been screened for signs of CHD, and were assessed over period of 8.5 years. Friedman & Rosenman, from their work as cardiologists, noted that their patients displayed a common behaviour pattern: they were goal-oriented, driven, competitive, impatient and hostile. These characteristics, it was hypothesised, would lead to both raised blood pressure and raised levels of stress hormones, both of which are linked with illness – see Stress & Illness.

Type A’s stress-related self-expressive behaviours are typical of the RED vMEME: competitive, impatient, restless, pressured and aggressive. Some ORANGE attitudes and behaviours – eg: ambitious, driving for achievement  – also fit into the Type A profile. If an individual is high in Psychoticism and/or is a Choleric type, then they are likely to experiences these states with greater intensity.

However, Stephanie Booth-Kewley & Howard Friedman (1987) more specifically relate this vulnerability to the kind of chronic negative states RED (especially in a Choleric type) is capable of getting itself into – eg: hostility to others, feeling aggrieved, ‘hard done by’, etc). Their findings are supported by a number of other studies, including Karen Woodall & Karen Matthews (1993). An interesting longitudinal study by John Barefoot et al (1989) of 118 male law students high in hostility found they were 5 times more likely to die before the age of 50 than colleagues who were low in hosility. Janice Williams et al (2000), in a prospective longitudinal study of 13,000 found 256 had experienced heart attacks in the 6 years following initial assessment. Those who had scored highest on an ‘anger scale’ were 2.5 times more likely to have had a heart attack; those rated ‘moderate’ on the anger scale were 35% more likely to have had a coronary even than those rated ‘low’. A meta-analysis of 35 studies by Michael Myrtek (2001) found an association between CHD and hostility but no other Type A traits.

However, as Eysenck (1988) concluded, stress can be just as dangerous to those oriented towards the conformist/self-sacrificial side of the Spiral – termed ‘Type Cs’ by Friedman & Rosenman. They saw Type Cs as sociable but repressed (PURPLE/Introversion/Impulse Control), industrious and conventional (BLUE) and as reacting to stress or threat with a sense of helplessness (Melancholic). There is a body of evidence linking Type C severe and ongoing suppression of self to forms of cancer.

The highly-controversial psychoanalyst Wilhelm Reich (1948) appears to have been the first researcher to link cancer with failure to express emotions. Reich particularly emphasised failure to express sexual emotions. In the later 20th Century study after study showed a correlation between stress and cancer. In a longitudinal study over 15 years of 1000 medical students over 15 years, Caroline Thomas & Karen Duszynski (1974) found those who were less close to their families were more likely to develop cancer. Obviously those students with fewer people to confide in were more vulnerable. Tina Morris et al (1981) clearly identified women with Type C personalities as being more vulnerable to the development of breast cancer. From a 15-year study of 15-year study of women with breast cancer, Lydia Temshok (1985) found that  a passive style for coping with stress even made relapse more likely. She also discovered that cancer patients, who subconsciously kept emotions such as anger under the surface, remaining ignorant of their existence, had slower recovery rates than those were more expressive. Another trait common to these patients was self-denial, stemming from a lack of awareness of their own basic emotional needs.

Gender
The simple fact that men tend to suffer from CHD more than women has prompted research into gender differences in what stresses (generally) the 2 sexes and whether there are differences in how they experience fight or flight.

Catherine Stoney, Mary Davis & Karen Matthews (1987) found that men respond more strenuously to stressors – ie: they experience fight or flight in a more extreme or more accelerated way. Karen Matthews et al (1991) discovered women generally show smaller increases in heart rate, blood pressure and ‘stress hormones’ than men. This is at least in part due to having higher levels of the hormone oxytocin which scales back cortisol and adrenaline, thus reducing sympathetic arousal.

Perhaps unsurprisingly, where a woman is in her menstrual cycle can make a difference in how she experiences stress. Janice Hastrup, Kathleen Light & Paul Obrist (1984) discovered women show lowered stress responses at the time in their cycle when oestrogen is at its highest .

Social factors also contribute to the gender differences discussed. Shelley Taylor et al (2000) have postulated that it is the social connectedness women tend to engage in that gives them an advantage: in a stressful situation women to reach out to others for help while nurturing others who are stressed. In contrast men tend to be confrontational. Taylor et al contend it is evolutionarily adaptive for women to respond to stressful conditions by protecting and nurturing their young and by seeking social contact and support from other females.

‘Personality’ too may play a role. Gerdi Weidner & Lorraine Collins (1983) established that women are less likely to be Type As.