PART 2
The frustration of needs
Abraham Maslow’s famous Hierarchy of Needs (1943, 1971)  effectively describes the sequential levels of needs/goals of the emerging vMEMES. Eg: PURPLE wants to find safety in belonging; RED craves esteem; etc. As Maslow theorised mainly from case studies, rather than the kind of methodological research Clare W Graves undertook, it’s hardly surprising that his Hierarchy does not match exactly to Graves’ Spiral. However, the match is close enough  – see the Comparison Map – for us to consider Maslowian concerns and principles from the perspective of vMEMES.

By doing this, we see not the ‘theoretical needs’ so often associated in a rather abstracted way with Maslow’s Hierarchy but living neurological systems within us desperate to be fulfilled.

Maslow’s Hierarchy is looked upon by a number of psychologists as a guide to ‘ideal mental health’. In other words, if an individual is able to progress up the Hierarchy, with their needs met at each level, then they will move beyond the lower subsistence/deficiency levels and start to meet their ‘growth needs’ and eventually their ‘being needs’. According to Marie Jahoda (1958), Self-Actualisation – YELLOW in the Graves construct – is  a key element of ideal mental health. In Gravesian terms, they will move beyond the limited visions of the 1st Tier and see through 2nd Tier lens. In Humanistic Psychology, this need to grow is termed the Actualising Tendency  – which Don Beck (2002a) pretty much parallels in his concept of the Prime Directive.

However, if someone becomes blocked at one level or the needs of a lower level are not met, then this will create problems. Blockage will lead to frustration of the individual’s psychological progress; having to attend to the needs of a lower level from a higher position in the Hierarchy/Spiral will inevitably produce significant behavioural changes, accompanied almost certainly by degrees of anxiety. For example, if the PURPLE love-and-belonging needs of a divorcing couple are shattered by their split-up, then that will tend to destabilise their RED’s pursuit of esteem at the next level. Prolonged stress, frustration and anxiety are all likely to lead to Depression.

Don Beck (1998) has stated that each vMEME needs to be exercised regularly for it to be healthy – including but also transcending Maslow’s idea of needs being met. Correspondingly, suppression of a vMEME will lead to psychological problems.

Of course, expression of a vMEME needs to be in a way which is healthy to the whole of the human Spiral. So, for example, if BLUE, in its need to establish orthodoxy and compliance, suppresses RED’s need for self-expression completely, this will cause all kinds of problems.

Sigmunds Freud’s Psychoanalytic Theory (1923) can be useful here in understanding these vMEME conflicts.

Freud’s Id is the basis of the individualistic side of Graves’ Spiral – the diversity generators, as Howard Bloom (1997) calls them. Freud’s growth of Ego-to-Superego relates to the collective side of the Spiral – Bloom’s conformity enforcers.

Freud saw psychiatric disorders – at one level at least – as resulting from the conflict between the express-self Id (at its peak, RED) and the conform-to-expectations Superego (BLUE) when the Reality Principle of the Ego is unable to reconcile these two competing systems. To protect itself, the mindwill employ a number of defence mechanisms in the selfplex such as repression, displacement, denial and intellectualisation.

However, the suppressed problem is likely ‘leak’ through, perhaps in disturbing dreams and/or abnormal or depressed behaviour.

In some of his writings Freud expressed concern that the Superego totally suppressing the Id was a principal factor in many cases of Depression. (He also attributed Depression to a sense of loss, often in childhood, real or perceived.)

Reframe Freud’s ideas in terms of Graves’ Spiral and it becomes more than possible that vMEME conflicts do indeed contribute to psychological disorders, with overdominance of the collective side’s conformity enforcers able to push some into acute anxiety and even Depression.

However, it is not only express-self vs sacrifice-self/conformity which provides a platform for vMEME conflicts. Sense of time can be a stimulus for conflict on the same side of the Spiral. 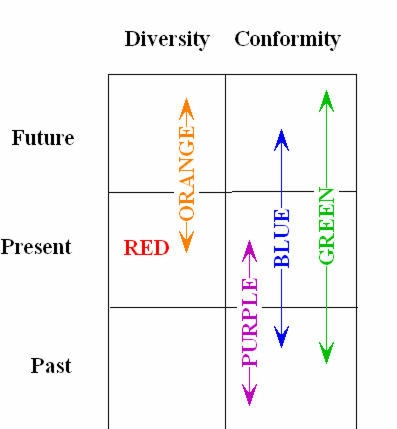 In this kind of scenario, RED, living just for now, could find itself in conflict with ORANGE’s wanting to plan for the future – leading to anxiety. Equally the tradition-oriented thinking in PURPLE will find it hard to grasp the future-focused ecological concerns of GREEN, again leading to anxiety.

Taking this argument further, what kind of anxiety or other mental problems could arise when vMEME conflict is both across sense of time and express-self vs conformity -eg: ORANGE future-focused/express-self conflicting with PURPLE tradition-oriented/conformist?

Biological + Cognitive Diatheses
So far, we’ve looked at vMEMES as contributing to the creation of cognitive diatheses and their conflicting needs creating anxiety at a cognitive level. We’ve also looked at biological diatheses, some of which may hinder the functioning or even development of vMEMES and, thus, the ability to cope with adverse life conditions.

What about when a negative cognitive pattern becomes locked with a biological diathesis?

Earlier we mentioned Hans J Eysenck’s Dimensions of Temperament construct, in which the naturally Melancholic personality is created by high Neuroticism being mixed with high Introversion. We also noted that the self-sacrifice/conformity-oriented vMEMES are more likely to lead to the creation of depressive schemas. What if such a vMEME locks into a Melancholic personality?

Psychologists since the time of Carl Gustav Jung (1921) have sought to understand the link between temperament and motivation. For all the interesting results of such research – eg: N N Trauel (1961) found extraverts are much more likely to be disobedient – we still don’t understand how these 2 aspects of personality link. Yet link they do. In my own desk research, I have found that 3 of the 4 types of behaviour documented by William Moulton Marston (1928) contain both motivational and temperamental descriptors effectively matching PURPLE to Phlegmatic in Marston’s Submission, RED to Choleric in Dominance and BLUE to Melancholic in Compliance. (Marston’s Inducement does include some descriptors of both ORANGE and Sanguine but the match is much weaker.)

So, if BLUE can fit with Melancholic to create Compliance, can they also fit together to create a bio-cognitive diathesis, waiting for its stress trigger? The PURPLE-Phlegmatic fit to create Submission hardly bodes well for a successful approach to problems either!

It’s interesting that, in his work on Attribution Theory, Julian B Rotter (1966) hypothesised that there is a biological basis (Melancholic or Phlegmatic temperament?) to whether someone tends to have an internal or external locus of control, finding that people with an external locus – ie: they generally feel events are out of their control – tend to indulge in much more negative self-talk (meta-stating from the effects of self-sacrifice/conformist vMEMES?). Aaron T Beck’s (1967) ‘sociotropic personality’ fits to some degree with this concept – Beck’s sociotropic’s needing the approval of others. (Thus, a snub from somebody deemed to be ‘important’ might instigate depressive thoughts.) However, Beck’s ‘autonomous personality’ might also be vulnerable if their self-esteem were to be undermined. (Eg: losing a game of tennis or having a work decision overruled.) The sociotropic’s PURPLE seeks approval and acceptance while the RED of the autonomous is focused on doing what it wants to do and avoiding restrictions – and especially shame. Simply by considering both Rotter’s and Beck’s concepts, we can begin to see just how complex temperamental and motivational interactions are.

Just how convoluted the bio-cognitive relationship may be is reflected in that both Graves and Maslow declared that the 7th level of thinking (G-T/YELLOW or Self-Actualisation) is effectively free of fear – associated with Neuroticism and the producer of anxiety. So maybe there is something in the idea that working up the Hierarchy/Spiral – life conditions permitting – is conducive to good mental health…?

Early & Simplistic Thoughts
These are early thoughts and, in a sense, quite simplistic. I have not attempted to look at how vMEME harmonics or transition states might influence any of these elements. (For example, one of the characteristics of the RED/BLUE transition is the development of shame and guilt.) Nor have I really considered social/societal factors and especially the enormous pressures that social roles can impose upon the individual.

My intention in publishing this article is to raise possibilities and probabilities as an argument for further research. The Gravesian approach and its Spiral Dynamics and Spiral Dynamics integral builds have been rather overlooked by Psychiatry and Clinical Psychology and it seems critical to me that the Gravesian systems should be studied in relation to psychopathological disorders.

The current crop of drugs do provide powerful treatments for many forms of mental illness – and even more effective drugs are known to be in the pipeline. (It may even be that a tryptophan-enhanced diet will help some depressives!) However, drugs can produce some pretty unpleasant side-effects and the ‘patient’ may become ill again when treatment is discontinued.

There may be no real alternative to drug therapy for Endogenous Depression and other forms of mental illness such as Schizophrenia; but, if there are both cognitive and biological diatheses to develop other forms of Depression, then drugs may not be so appropriate in the longer term and we need to look at the coping mechanisms for the life conditions.

Over the years a number of psychotherapies have been used in treating mental illness – from classic Psychoanalysis to Cognitive-Behavioural Therapy. Different psychotherapies seem to work for different people at different times. None so far works consistently across the board – even for a single classification of illness.

If we are to take the treatments forward beyond an ever-increasing dependency on drug therapy, then we need to understand how core motivational systems (vMEMES) affect people in ways which can lead to mental illness.

It is also clear from our brief survey of Depression that no one cause can explain all instances of the illness; and, in many cases, the symptoms may be the consequences of multiple factors. The factor common to almost all instances – and almost always ignored! – is the effect of vMEMES. After all, what is more important in someone’s psychology than their motivation(s)?

NB: This is the sixth revision of ‘Can vMEMES cause Clinical Depression?’ since its original posting in August 2004.

The intention is not, as such, to produce an academic paper linking vMEMES to Clinical Depression. The intention is to speculate on how the concept of vMEMES can be woven into some of the major theories about the causes of Depression. This then justifies my call for those with the facilities to do so to undertake serious research around the potential relationship between vMEMES and causes of Depression and other ‘mental illnesses’.