The 3 systems interact to produce the adult love style.

According to Shaver, Hazan & Bradshaw, the attachment and caregiving systems are acquired in infancy. The latter is knowledge gained about how one cares for others, learned by modelling the behaviour of the primary attachment figure – effectively an internal working model of John Bowlby’s Continuity Hypothesis.

The sexuality system is also learned in relation to early attachment – eg: insecure-avoidant individuals, with their PURPLE vMEME’s safety-in-belonging needs unfulfilled, are more likely to have the view that sex without love is pleasurable

There is considerable correspondence with the work of Berscheid & Walster, as well as the Triangle of Love theory of Robert J Sternberg (1986). Shaver, Hazan & Bradshaw, for example, proposed that companionate love would include attachment and caregiving but not necessarily sexuality. Passionate or romantic love might involve only sexuality.

Sternberg’s theory is, in his own words, a theory of ‘consummate love’, comprised of components or elements. The model is illustrated below… 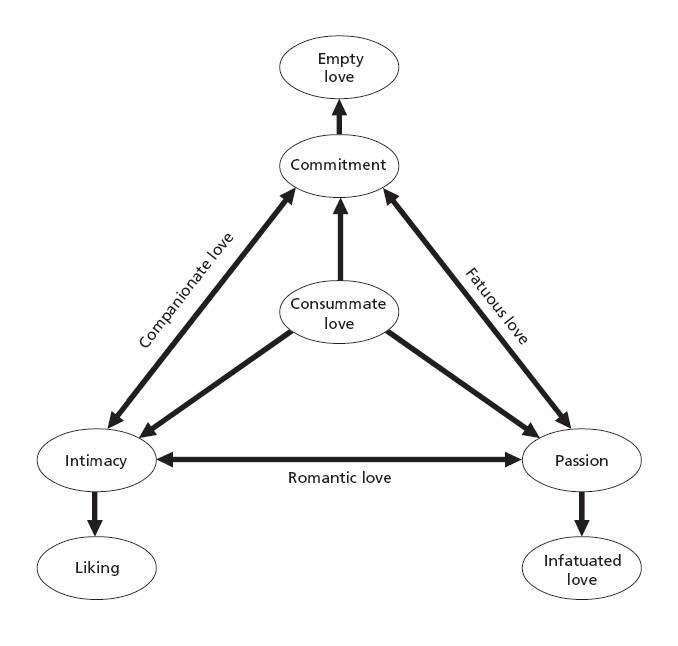 Further elaboration of the model shows…

Sternberg believes that most  people have 2 triangles: how their  relationship should be; and how their relationship actually is. The  most successful relationships are  those in which the 2 triangles are  closest. This can be considered a reflection of Carl Roger’s (1961) concepts of perceived self, organismic self and ideal self, with the aim of therapeutic intervention being to bring the 3 selves of the selfplex closer together to develop congruence. Thus, greater congruence between the perceived relationship and the ideal relationship will inevitably produce happier relationships.

Sternberg (1988) put forward the notion that people, from early in life, form ‘stories’ about what love should be – influenced by our parents, watching TV and reading books. He interviewed students  about their romantic expectations and identified 25  common stories  used to describe love -eg:-

There were gender differences in the story telling. Women tended  to prefer the travel story approach: beginning a relationship is like starting a new journey that promises to be both exciting and challenging. Men tended to prefer art – physical attractiveness is essential – and pornography – it is important to be able to gratify all my partner’s whims and sexual desires.

Support for Sternberg comes from  Beverley Fehr (1988). Rather than distributing questionnaires based on a particular theory of love, Fehr got participants to describe love in their own words and then  content analysed their responses. The emergent categories were found to map closely to Sternberg’s 3 factors which form overlapping clusters in the experiences of lovers.

Peter Marston et al (1998) also  support Sternberg. The researchers questioned 79 couples  about the way passion, intimacy and  commitment were perceived in their  relationships. They found:-

Although Sternberg conceived the Triangle of Love in relation to Western concepts of love and relationships, Moghaddam and others have been able to apply the Triangle very successfully to non-Western relationships to demonstrate the importance of commitment in those cultures. For example, in arranged marriages commitment is the starting point from which passion is predicated and which may then lead to real intimacy, Such appplications enable Sternberg’s Triangle to be seen as a universally-applicable model of love.

A less well-know ‘component’ approach to love is that of Don Byrne (1997) who proposed 5 elements to romantic love:-

Types of love
In contrast to Sternberg’s approach of dissecting ‘love’ into its components, John Lee (1973) proposed 6 types of love – 3 Primary which are completely discreet from one another and 3 Secondary which combine Primary typess.

The Primary types are:-

The Secondary types, which combine Primary types are:-

Strong support for Lee’s categories comes from  Terry Smith Hatkoff & Thomas Lasswell (1979). They designed their own questionnaire based on Lee’s 6 types and got responses from 544 students and other volunteers in the  South and West of the United  States. They found men were more Ludus and Eros while women were more Storge, Pragma and Agape. Lee had predicted men would endorse Ludus more frequently – which would also fit with the predictions of Evolutionary psychologists such as Buss (2000). Again, Evolutionary Psychology would indicate Pragma being a key part of how a woman approaches a romantic relationship.

Clyde Hendrick & Susan Hendrick (1986) found that Lee’s typology was supported by questionnaire research in 2 studies with 1,807 and 567 respondents, respectively. “Six love style scales emerged clearly from factor analysis” in both studies. They produced a Love Attitude Scale to detect the 6 varieties of love through questionnaire responses.  It contained items such as:-

Initially, Hendrick & Hendrick used different names for the categories – such as ‘Game-playing love for Ludus – but their concepts map so closely to Lee’s that few commentators bother with the Hendrick & Hendrick  terms. However, their Love Attitude Scale was found to be so reliable, it was used in much of the later research on Lee’s love types.

In 1993 Hendrickj & Hendrick asked male and female undergraduates to write about a romantic relationship – either real or fictional – and then content analysed the stories to see which of the 6 love types seemed to be most  important to each participant.  The percentages of the total categories, along with a typical example taken from the students’ writing is shown in the table below… 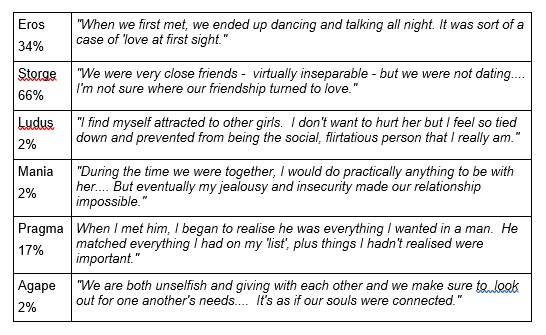 Many of the students demonstrated 2 types in their stories…

These findings largely support the findings of Hatkoff & Lasswell. Women were presumed to be more inclined to be practical about ‘affairs  of the heart’ (Pragma)  because they were often economically dependent on their partners. Economic dependence was also thought to link to Mania jealousy and possessiveness.

John Worobey (2001) took a  trait, rather than a dimension, approach. He measured  temperamental traits such as  anger, distress, sociability and  level of activity in 81 men and 163 women, all around the age of 20  and at a university in the north- eastern USA. The participants were then asked to complete questionnaires to identify their love types, using Lee’s concepts. Ludus was found to be the least popular love type, although men  favoured it more than women who tended to score higher on Storge and Pragma. Female participants tended to believe they were more emotional than men and ore interested in friendship rather than game playing as a basis for romantic relationships. However, high levels of emotionality (with high scores of distress and fearfulness) were the best predictors of preferred love types. Among the women, the higher scorers tended towards Mania and Agape while the men were more likely to favour Eros, Mania and Agape.

Worobey (1999) also found links  between temperament and love types and eating disorders in college women. Obsessive and game-playing love styles were related to dieting and Bulimia while fear and anger were related to Bulimia and oral (self-)control.

In addition to temperamental factors influencing approaches to love, clearly vMEMES will also influence people. Eros will be driven naturally by a PURPLE/RED vMEME harmonic. Ludus undoubtedly involves RED, though there may be elements of strategic ORANGE in the way some lovers game. Storge and Pragma will be strongly influenced by PURPLE. Mania may involve damaged RED and unhealthy RED – possibly with a psychoticist ‘lock’. Agape may well have elements of GREEN and even 2nd Tier thinking in its selflessness.

Arguably the most important piece of cross-cultural research to date into Lee’s love types is that of Felix Neto et al (2000). They hypothesised that “factors involving strong personal feelings, such as mania, eros, and agape, would be largely free of cultural differences” while “factors involving strict social rules… such as pragma, storge, and ludus, would be dependent on cultural influences.” The researchers surveyed 1,157 under­graduates, equally divided between men and women, at universities in Angola, Brazil, Cape Verde, France, Macao, Mozambique, Portugal and Switzerland. The results supported their hypotheses. Types of love involving strong personal feelings were similar in all cultures; “cross-cultural differences were very moderate.” However, with regard to Pragma and Storge, “cross-cultural differences were considerable.” Angolans, Brazilians, Cape Verdians and Mozambicans were more prag­matic than French and Swiss. The first 3 of those countries also produced more storgic responses than French or Swiss. Neto et al also found “There were few differences between genders.”

With respect to age, Nancy Grote & Irene Frieze (1998) found Eros and Ludus decline over time in long-term relationships. The researchers asked 581 participants, aged between 45 and 47 with an average length of  marriage of 18 years, about how they felt at the beginning of the  relationship – as well as their current feelings about it.

Hendrick & Hendrick (1992) found lasting romantic relationships higher on Eros and lower on Ludus. Their first finding is supported by Kamel Gana, Yaël Saada & Aurélie Untas (2013) who were curious about which love types might correlate with marital satisfaction. They studied 146 heterosexual couples and noted: “The results revealed that among the love styles, only Eros contributed to marital satisfaction for both men and women.” Soumya Sharma, & Kanika Khandelwal Ahuja (2014) had similar findings from 20 dating couples, 20 couples married for less than 2 years and childless, and 20 couples married for more than 15 years with children. “Among the various love styles, only Eros and Agape were significantly correlated with relationship satisfaction across life stages.”

So what is romantic love?
From this survey it seems romantic love (Eros, in Lee’s schematic) is both instantly achieved and develops over time; it has a very strong sexual element, driven by in large part by biology. If, the relationship survives, it may drift into more of a companionate love. Equally, in some circumstances, companionate love between non-sexual partners can morph into Eros. –  sometimes very quickly! To survive in the longer term, the relationship needs to contain all the elements of Sternberg’s Triangle of Love.

It would appear our evolutionary heritage will predicate men more to Ludus and women to Pragma…and someone’s choice of partner may be influenced strongly by the pheromones they inhale.

So, can a sociopsychological approach really explain just exactly what the meme of love is…?

The theories and models looked at certainly go a long way into understanding the many manifestations of love….but is there something more, indeed something mystical about romantic love that justifies the use of terms like ‘soulmate’ and ‘life partner’…? That is almost certainly beyond the boundaries of Integrated SocioPsychology based on science. (But, on a personal level, I’d like to think there is!)