Simon Green et al (2016, p149-150) write: “The economic approach works on the assumption that people run relationships in a similar way to a joint bank account – keeping an eye on what they and their partner are putting into and getting out of the relationship. The theories share the view that people may choose to move on if someone else offers a better ‘deal’, in a similar way to a bank offering an incentive to join them. Economic theories help to explain how couples keep their relationship going and the decision to stay or go when relationships get into difficulties.”

Social Exchange Theory
Developed by John Thibaut & Harold Kelley (1959) from the work of George Homans (1958), this approach is based on the precept that people try to maximise the rewards from a relationship – eg: attention, affection – while minimising the costs – eg: time and effort, dealing with the other person’s emotional problems.

The underlying assumptions is that people seek out and maintain those relationships in which the rewards exceed the costs. The minimum acceptable  for a relationship to form and be sustained is that rewards received should at least equal rewards given.

The establishment of a relationship is stated to go through 4 broad stages, as outlined in the graphic below:- 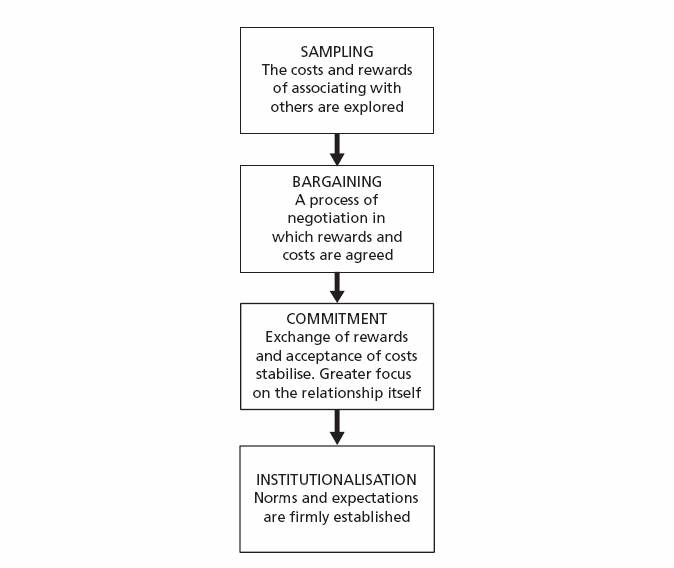 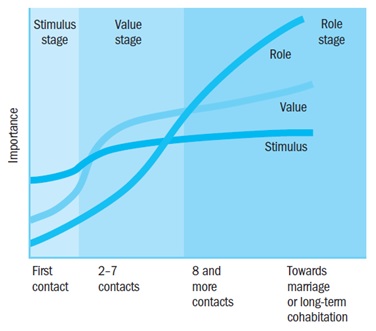 An alternative formation stage economic theory is offered by the Stimulus-Value-Role (SVR) theory of Bernard Murstein (1970) – see graphic to the left. ‘Stimulus’ is the trait (usually physical) that draws your attention to the person. Each partner evaluates their own attributes in terms of how attractive they might be to the other. From this, they estimate the likelihood that their attraction will be reciprocated and that future interaction with the other will be rewarding. After time is spent together dating or hanging out, values are compared for compatibility and evaluation of maximization of rewards while minimization of costs is calculated. This process of value appraisal allows them to continue to assess the potential of the relationship. During the final role stage, the partners evaluate themselves and each other for suitability in various roles  – eg: spouse, parent. If they find relational compatibility supports it, the pair may choose to take roles, which typically include exclusive dating, cohabitation, engagement, or marriage. 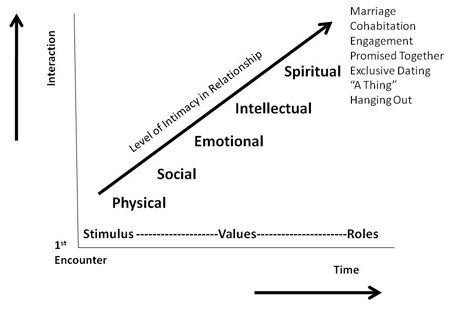 However, Murstein conceded that individuals make stimulus, value, and role assessments of each other throughout the entire courtship process; each factor simply becomes more prominent during a particular stage.

Murstein also attempted to take into account ‘softer’, emotional  factors by considering how intimacy develops over the stages – see graphic to the left.

Thibeaut & Kelley also talk about the Comparison Level Alternative (CLalt). This is to do with whether any alternatives are available.  The level of satisfaction may be influenced by comparison with the rewards perceived to be available by having a relationship with someone else.

Inverse support for this comes from Jeffry Simpson, Margaret Lerma & Steven Gangestad (1990). They had participants rate members of the opposite sex in terms of attractiveness. Those who were involved in relationships gave lower ratings. In other words, they mentally closed themselves off from attractive alternatives!

More obvious support comes from Susan Sprecher’s (2001) longitudinal study of 101 dating student couples. She found that the most influential variable for both commitment and relationship satisfaction was the quantity and quality of CLalt. However, Rowland Miller (1997) found that people in highly-committed relationships tended to ignore even highly-attractive alternatives.

Support for the the importance of ‘profit’ comes from a study by  Lawrence Kurdek & Patrick Schmitt (1986). They investigated heterosexual married, heterosexual cohabiting, gay and lesbian couples and found for all 4 types greater relationship satisfaction was associated with perceiving benefits and there being only less attractive alternatives available.

The social exchange concept tends to assume that people are constantly calculating costs and benefits in their  relationships. This assumes that behaviour of socialized persons is purposive or goal oriented, and not random. It also reflects Operant Conditioning in the sense that people repeat behaviours that are rewarded and avoid those that go unrewarded.

Equity Theory
This was developed initially by Elaine Hatfield, G William Walster & Ellen Berscheid (1978) on the basis  that costs-benefits calculations are more complex than Social  Exchange Theory allows. According to Equity Theory, people expect to receive  rewards  proportional to the rewards they give out. They calculate the costs and benefits for the other party too.

From this research Hatfield, Walster & Berscheid established the 4 principles of Equity Theory:-

Elaine Hatfield et al applied Equity Theory to their research with newlyweds in 1981. They asked newlyweds to indicate the extent to which they felt they were receiving more or less than they should against what they were contributing to their marriages. The participants were also asked to indicate their level of contentment, happiness, anger and guilt. Those who had the most equitable relationships reported the highest levels of satisfaction. Those who were underbenefitted had the lowest level of satisfaction and tended to experience anger. Those who overbenefitted tended to be dissatisfied, possibly from guilt at their partner’s disadvantage.

Confirming Hatfield et al’s findings on the benefits of parity in equity, Sandra Byers & Adrienne Wang (2004) found that partners in more equitable relationships were less likely to cheat and the relationship was more likely to last.

When Michael Argyle (1988) reviewed Hatfield et al’s data, he found a gender difference: men who were overbenefitted were almost as satisfied  as those in an equitable marriage; but overbenefitted women were much less satisfied than women with equal benefit. Sprecher (1992) had similar findings about overbenefitted women. Interestingly, Laura Stafford & Daniel Canary (2006) found underbenefitted men put much less effort into relationship maintenance strategies. Alfred DeMaris, Annette Mahoney & Kenneth Pargament (2010) found women often perceived themselves as more underbenefitted, with many being disturbed by this disadvantage.

Bram Buunk & Nico Van Yperen replicated Hatfield et al’s study in 1991 and found similar results. However, those who were low in exchange orientation had high marital satisfaction regardless of the level of benefit. In other words, the results were replicated with those who were high in exchange orientation – ie: they expected the giving of rewards to be followed immediately by the receipt of rewards.

The vMEMETIC influence on cultural memes may be reflected in Kenneth Gergen, Stanley Morse & Mary Gergen’s  (1980) findings that European students prefer equality – they favour favour an equal distribution of rewards – while American students work on the ratio of inputs:rewards. GREEN has been the leading edge of thinking in much of Europe over the past 50 years while ORANGE has tended to dominate in the US (Don Beck, 2002a).

Individuals who are high in the temperamental dimension of Psychoticism are also likely to be much more exchange-oriented. Motivational vMEMES and temperament may help explain the Equity Sensitivity Construct (1987) of Richard Huseman, John Hatfield & Edward  Miles who divided equity responses into:-

Interestingly Buunk (1996) found no association between its equity level and the future quality of a relationship.

Investment Theory
Caryl Rusbult’s (1980) Investment Theory is another development from Social Exchange Theory. Rusbult defines ‘investment’ as “anything a person puts into a relationship that will be lost if they leave it”.

High satisfaction and investment were found to be important in committed relationships. The existence of an attractive alternative featured significantly in deciding to end a relationship.

Rusbult also found that ‘costs’ started to be counted from around 12 weeks into a relationship, with much more emphasis on counting them once the ‘honeymoon phase’ was over.

Benjamin Le & Christopher Agnew (2003) conducted a meta-analysis of  52 studies, from the late 1970s to the late 1990s, with collectively over 11,000 participants (54% male; 46% female) from 5 countries (USA, UK, The Netherlands, Israel and Taiwan). They found the correlation between satisfaction and commitment (+0.68) to be significantly higher than either quality of alternatives (-0.48) or  investment size (+0.46) to commitment. The researchers also found a correlation (+0.47) between commitment and stay or leave behaviours – those with low commitment being much more likely to leave. Le & Agnew’s findings about the criticality of commitment to relationship survival was confirmed by an even larger meta-analysis (Benjamin Le et al, 2010) of 137 studies involving 38,000 participants over a 33-year period.

Wind Goodfriend & Christopher Agnew (2008) state that the concept of investment should include future plans. They argue that some relationships survive not because of the current balance of investments but due to the motivation to see highly-desirable plans come to fruition.

Somewhat controversially Caryl Rusbult & John Martz (1995) have used Investment Theory to explain why some women stay in abusive relationships. They argue that, where the investment is high – eg: children – and the alternatives are few/poor – eg: little money, nowhere to live –  then, in the circumstances, it is  still ‘profitable’ for the woman to  stay in the relationship. They based their research on interviews with ‘battered’ women at a shelter. They found that those most likely to return to the abusive partner were those with the greatest investments and the fewest attractive alternatives.

A challenge to economic theories: Communal Relationships
Margaret Clark & Judson Mills (1979) proposed the concept of communal relationships as a deliberate antithesis of  Social Exchange Theory and its derivatives.  They assert that most romantic relationships are not based on the principle of Exchange but on meeting the needs of the other person. They state that people avoid being calculating and that not being calculating is considered a mark of true friendship and romantic love.

Argyle discusses the difficulties in scaling rewards – making the concept impractical as a ‘real life’ proposition. For example, praise from the partner might be invaluable in building self-worth with someone low in self-esteem but not so important to someone with already high self-esteem.

Bernard Murstein, Mary Cerreto & Marcia MacDonald (1977) note that marital adjustment is poorer for couples focused on exchange and equity. They contend that happily-married couples do not focus on issues of exchange or equity.  Elaine Hatfield & Richard Rapson (2011) confirm this for couples where there is a deep and lasting commitment.