PART 2
Conflict resolution or breakdown…?
Paul Amato & Stacy Rogers (1997) set out, in a longitudinal study (1980-1992), to examine the degree to which reports of marital problems were an accurate predictor of divorce. In 1980 telephone interviewers used random-digit dialling to locate a national sample of 2033 married persons aged 55 years and under. Of those contacted, 78% completed the full interview. The analysis was based on individuals for whom information on marital status existed at 2 or more points in time – ie: 86% of the original 1980 sample. It was found that wives were more likely to report their marital problems than husbands – this was not because husbands had fewer problems; but simply because they tended not to report them. Infidelity, wasting money, drinking or drug use, jealousy, moodiness and irritating habits were found to be the most common grounds cited for divorce. The researchers a high correlation between marital unhappiness and divorce actions.

Amato & Rogers concluded that, in many case, it should be possible to predict divorce from reports of marital unhappiness. Of course, the study is vulnerable to criticisms of cultural bias and historical bias as it was conducted in an era when divorce was relatively practicable and relatively accepted – as, say, compared to the pre-World War II era when, in the Western world, the prevalent memes meant divorce was often considered scandalous.

So, when a relationship starts to go wrong, how do the partners deal with it…?

From studying heterosexual, lesbian and gay relationships, Caryl Rusbult, Isabella Zembrodt & John Iwaniszek (1986) identified 4 distinct types of strategy in their Voice, Loyalty, Neglect, Exit model for dealing with relationship problems, as illustrated in the graphic below…

The researchers found those with high psychological femininity (warmth, intimacy, concern with interpersonal relations) were more likely to use constructive strategies to try to repair the relationship than those with high masculinity (aggressiveness, independence). The latter tended to act destructively towards the relationship – whether passively or actively. Males high in the Psychoticism Dimension of Temperament are particularly likely to be ruthless and destructive in their attitudes to a failing relationship.

Better than having to repair a damaged relationship are strategies to maintain its health. Kathryn Dindia & Leslie Baxter (1987) chronicled 49 strategies used by couples to maintain their marriages – such as going for walks together and talking about the day’s events. Unfortunately Dindia & Baxter found such strategies were more likely to be employed by newly-weds than long-married couples. This might help explain Peter Pineo’s (1961) identified that, in many marriages, relationship satisfaction decreases almost linearly with length of time of the relationship. It takes effort and focus to keep the relationship interesting and fresh. 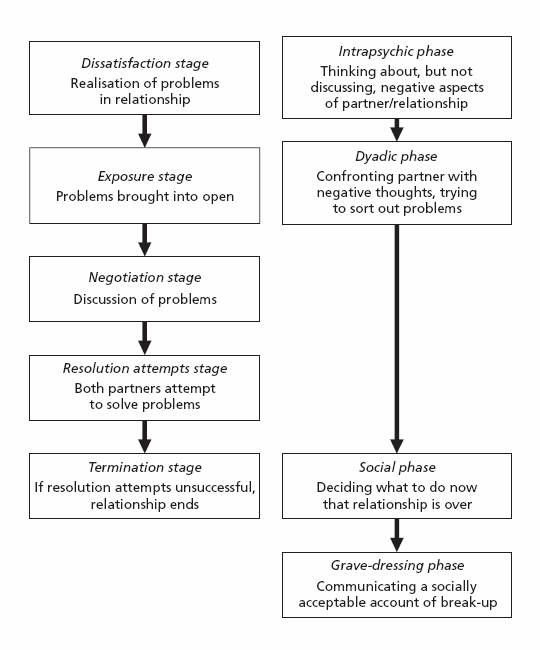 Lee based his 5 stages on a study of over 100 pre-marital romantic break-ups. His model tends to focus on the processes involved while there is still hope of saving the relationship. The Exposure and Negotiation stages tend to be the most exhausting. A key finding was that it was the stronger relationships that took the longest time to work through the 5 stages.

Duck’s 4- stage model tends to focus more on the ending of relationships. Duck saw each stage as requiring a threshold to be crossed:-

A personal anecdote…at the end of my previous relationship, I told anyone who would listen – including a number of her friends – that ‘she’ had ‘flipped’ – to all intents a minor nervous breakdown – and had ended the relationship in an apparent moment of madness. With my credentials as Psychology teacher and trainer, my story travelled a long way and got me a lot of ‘social credit’. I remember around about a year later, pulling into a service station on the M62 and realising just how good a job a ‘gravedressing’ I had done. I saw in that moment all that I had contributed to the ‘mess’ and how much my actions had contributed to my partner’s distress. Although it is not usually included in accounts of Duck’s stages, he does actually include a fifth ‘floating’ stage he calls Breakdown – whereby partners realise what they are contributing to the crisis and correct their own faults. In my case Breakdown happened way too late to have any impact on the relationship.

Duck’s concept is one of the few stage models to employ thresholds – ie: a clear dividing line in crossing from one stage to another. This has made it particularly useful to relationship counsellors as they and the couples they are supporting are able to map where they are in the breakdown process. From that, they are likely to be more pragmatic in what options there are for the relationship.

Even so, Duck does not provide a complete model of relationship breakdown. By using it side-by-side with Lee’s model – as Michael W Eysenck & Cara Flanagan (2001) have done in the graphic above – it is possible to have a more complete model of the process. 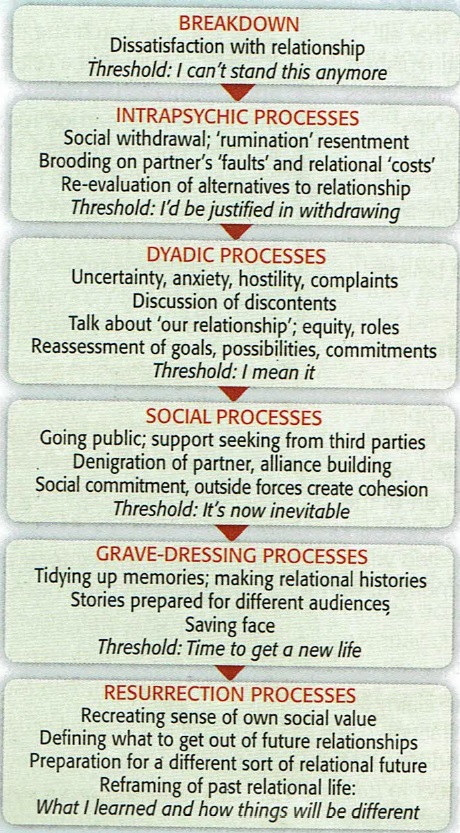 Later Stephanie Rollie (Stephanie Rollie & Steve Duck, 2006) amended and extended Duck’s model, keeping the critical thresholds but moving them back a stage and introducing the final stage of Resurrection. In this the ex-partners endeavour to learn from the failed relationship and take that learning forward into their next relationship.

The dubious assumption here is that the ex-partners are capable and willing to be that reflective. In fact, as Susan Fiske & Shelly Taylor (1991) have noted, many people much of the time are ‘cognitive misers’, unwilling or unable to put that much thought into even the most painful of emotional experiences.

Rollie & Duck also note some gender differences as partners go through the stages.

In Intrapsychic women express concern about the decline in communication whereas men tend to focus the loss of shared activities – sex in particular.

In Dyadic some men prefer not to discuss the issues which many women meta-state as evasive and further evidence of the problems. Male behaviour here is according with ‘Neglect’ in the Rusbult, Zembrodt & Iwaniszek model.

Women tend to seek external support/advice (from friends and relatives) more in Social – perhaps reflecting that women culturally and historically tend to have a more external locus of control.  However, women do tend to be more reflective in beginning the Resurrection phase earlier.

More gender differences in relationship breakdown
Sharon Brehm (1992) found that, in marriage, male expectations tend to be met more and that women get more stressed than men in the run-up to break-up. Brehm agrees with Amato & Rogers that women’s reports are a better predictor of breakdown than men’s – women being more likely to report basic unhappiness and incompatibility. Men cite sexual withholding as a cause of break-up while women dislike men forcing sex upon them. (This was taken as the man demonstrating insensitivity to the woman’s mood.) Brehm also found women were distressed by male aggression.

Susan Sprecher (1986) found that women report sadness, symptoms of Depression and frustration with relationship breakdown whereas men report anger and resentfulness. Ann Weber (1992) has similar findings. Men vent feelings outward;  they become angry and aggressive, and deflecting  the blame on to their partner rather than  themselves. They may attempt to restore the situation by making  their partner jealous. Women direct their feelings inwards; they become depressed, placing the blame for the  situation on themselves, and cope by taking action to strengthen the stability of the relationship. Frank Fincham & Kenneth Linfield (1997) argue that women tend to feel more responsible for making the marriage work and are more likely to blame themselves when it does not.