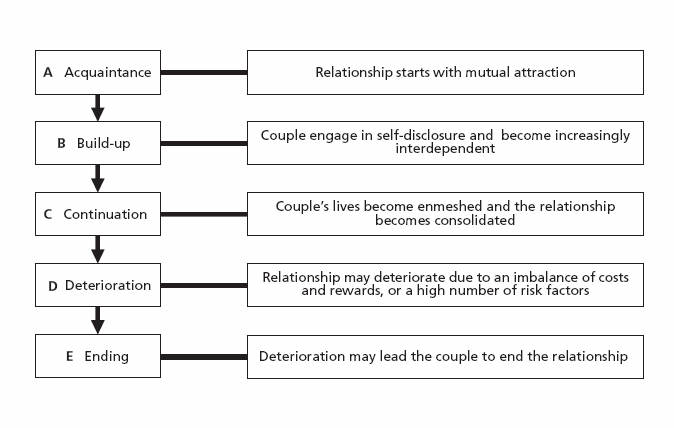 George Levinger (1977) developed a 5-stage model of relationships, providing a complete overview from beginning to end. In many ways the first 3 stages parallel the Stimulus-Value-Role model of Bernard Murstein (1970). However, like Ichak Adizes (1999) who applied his Organisation LifeCycle concept to relationships, the last 2 stages imply a certain inevitability that a relationship will decline unless strategies are deployed to maintain the relationship and keep it in what Adizes calls ‘Prime’.

The first intention of this piece is to consider how relationships can kept in Prime or brought back to it. It is usually relatively easy to keep a relationship going in the ‘first flushes’ of love when the partners idealise each other and there is lots of sexual activity. A year or so later when sexual activity has decreased – William H James‘ (1981) ‘honeymoon effect’ – and the partners are struggling to deal with the ‘daily grind of real life’, maintaining those idealised feelings about your partner and the relationship can be quite a task. Peter Pineo (1961) identified that, in many marriages, relationship satisfaction decreases almost linearly with length of time of the relationship. Ted Huston, Susan McHale & Ann Crouter (1986) found relationships could actually deteriorate quite quickly. They studied 100 newlyweds and found that, within 3 to 15 months of the wedding day, they reported themselves less satisfied with their marriages and their sex lives. They declared their love for each other less, complimented each other less and disclosed their feelings less often.

Clearly trying to keep the romance alive and passionate is a challenge. The problem with a relationship slipping into companionate love is that, while it may be very comfortable, for the partners, it lacks the excitement and the glamour of romantic love – and thus one or more partners may be tempted by another potential partner who appears to offer something more exciting. The Comparison Level Alternative of Social Exchange Theory. This will be particularly so if one of the partners has strong RED in their vMEME stack. If the male partner is high in the Psychoticism Dimension of Temperament, then equally that will make them vulnerable to temptation.

While the importance of having ‘good sex’ cannot be overstated for most relationships, how to make rekindle the ‘sex spark’ is largely beyond the scope of this site – although some ideas are hinted at in the Blog post Oh, goodie – Passionate Sex!!! But even ‘good sex’ in itself is not enough to sustain a relationship. 2 other key elements are vital to the longer-term success of a relationship: self-disclosure and needs satisfaction.

Self-disclosure
Irwin Altman & Dalmas Taylor’s Social Penetration Theory focuses on how much the partners in a relationship disclose about themselves to their partner.

The Norm of Self-Disclosure Reciprocity is usually followed by people in the early stages of a relationship in which how much you reveal about yourself is paced with how much the other is revealing about themselves. The Disclosure Reciprocity Effect states that the more someone tells us about them, the more we feel obliged to tell them about us. Or, as Valerian Derlega & John Berg (1987) put it: “disclosure begets disclosure”.

Susan Sprecher & Susan Hendrick (2004) studied heterosexual dating couples and found strong correlations between the degree and quality of self-disclosure and several measures of relationship satisfaction. Jean-Philippe Laurenceau, Lisa Feldman Barrett & Michael Rovine (2005) found that self-disclosure and the perception of self-disclosure were linked to levels of intimacy in long-term married couples. Less intimate couples were found to disclose to each other less.

Interestingly Kathryn Dindia & Mike Allen (1992) were able to confirm some gender stereotypes about self-disclosure. From a meta-analysis of 205 studies between 1967 and 1990, covering 23,702 participants, they found:-

Richard Archer (1979) notes that, for many couples, the Norm of Self-Disclosure Reciprocity decreases over time. In an intimate relationship over time, one of the partners is more likely to offer support and understanding to the other rather than invest in self-disclosing. Usually, though not always, it is the man who, fulfilling the primeval role of protector, will disclose less and focus on supporting his partner. (The man can even see his own disclosing as a weaknesss when he should be strong for his partner.) This often has the unfortunate effect that the disclosing partner comes to feel they no longer know the non-disclosing partner so well and this can create distance between the partners. Altman & Taylor call this ‘depenetration’. Betsy Tolstedt & Joseph Stokes (1984) note  a variation of depenetration which is to talk intimately about only a few topics which are usually chosen to hurt the other person and usually involve negative feelings. Again the stronger the RED vMEME is, the more likely vengeful and hurtful disclosures will be made. Again, in men, high Psychoticism is likely to ramp this up to the levels of cruelty.

Needs Satisfaction
This approach is based on the idea that we form relationships for the rewards or reinforcements that we receive from others. According to Michael Argyle (1988), romantic relationships meet social needs – eg: approval meets self-esteem needs, being comforted meets dependency needs, controlling meets dominance needs, making love meets sex needs. In 1994 Argyle extended his list of needs to include hostility meeting aggression needs, company of the partner meeting affiliation needs and eating together meeting biological needs. (Families tend to eat more healthily at the dining table than singletons making do with a ‘TV dinner’.)

Argyle based his ideas considerably on the Reinforcement Affect Model of Gerald Clore & Donn Byrne (1974) which applies Classical Conditioning to relationships. In other words, we associate the person (neutral stimulus) with the reward they give us (sex, affection, validation, etc). It also applies Operant Conditioning principles in that we are likely to repeat behaviour we find rewarding – eg: continuing to date a willing/exciting sexual partner, staying married to a spouse who continues to believe in you in adverse circumstances.

The implication in Argyle’s work is that, if the partner no longer meets critical needs, then the relationship will face considerable difficulties.

Clearly there is much in Argyle’s theory and it shares certain assumptions with economic theories. However, its explanatory power has some limitations. Eg: most men don’t love prostitutes they use – even though their sex needs are met. Nor does it explain adequately the self-sacrificial actions partners make at times in many relationships.

Risk factors
Based on longitudinal studies Steve Duck (1992) identified key factors which could put a relationship at risk…such as:-

Support for the importance of risk factors comes from the work of Charles Hill, Zick Rubin & Letitia Anne Peplau (1981). The researchers conducted a longitudinal study based on 231 couples, just less than half of whom had ended their relationship approximately 2 years later. Differences in age, intelligence and physical attractiveness were found to be among the key factors in relationship break-up – as was an imbalance in how much each partner valued the relationship.

Hill, Rubin & Peplau also found significant differences in the levels of negative exchange between the couples – those who split up being less able to deal effectively with any conflict that arose. Such couples also were more likely to adopt a negative attributional style, blaming their partner when things went wrong while at the same time not crediting them when events had a positive outcome. The researchers concluded that relationships seem more likely to end when partners adopt a negative perspective, focusing attention on what is going wrong rather than taking positive steps to rectify the situation. The findings and conclusion would seem to fit well with Economic Theories. However, they may not describe attributions in communal relationships quite so well. That point also raises the possibility of cultural bias. The study was done in the individualistic culture of the United States and may not replicate in more collectivistic cultures.