Temperament: an individual’s characteristic modes of emotional response, mood shifts and levels of sensitivity to stimulation – all of which are sub-cognitive. 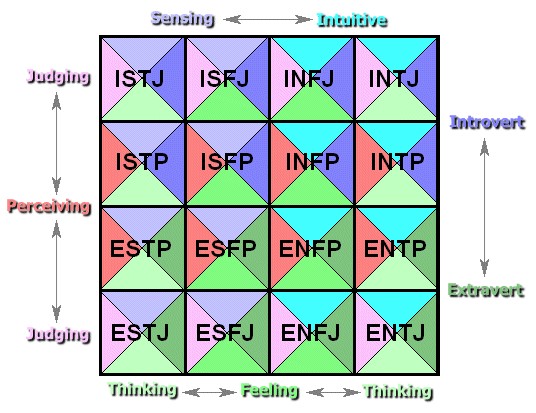 There are several models of ‘personality‘ which attempt to describe temperament. Carl Gustav Jung (1921) produced a model of psychological types which served as the foundation of the Myers–Briggs Typing Inventory (Isabel Myers & Katherine Briggs, 1956). This version – see left – has 4 dimensions which produce 16 types of personality, based on the 4 dimensions of:-

Another 16-type model is Raymond Cattell’s (1957)much-lauded 16 PF (aka 16 Personality Factors). However, this has proved unwieldy and attempts have been made to whittle the 16 down to a more manageable 5 by the likes of Warren T Norman (1963), and Paul Costa & Robert McCrae (1985). While the so-called ‘Big 5’ is a very popular conception for designers of ‘personality psychometrics, there is a notable degree of variance amongst the different versions of the Big 5, thereby undermining both its reliability as the basis of a test and its validity as a concept.

In comparison to Cattell and the Big 5, Hans J Eysenck’s Dimensions of Temperament* (Eysenck, 1947; Hans J Eysenck & Sybil B G Eysenck, 1976) is undoubtedly reductionistic, having only 3 dimensions. However, it is superior in that it offers biological processes to explain temperamental dispositions and it is the truest of the models to the notion that temperament is sub-cognitive – ie: Eysenck’s model is the least contaminated by cognitive concepts.
*Note: Eysenck referred to his model as ‘Dimensions of Personality’. ‘Dimensions of Temperament’ is preferred in Integrated SocioPsychology for clarity.

Temperament Hypothesis: put forward by Jerome Kagan, this is the notion that the infant’s temperament is the critical factor in determining the quality of the relationship with its mother/caregiver. Certainly substantial evidence put forward by the likes of Kazuo Miyake and Jay Belsky & Michael Rovine supports the idea that the infant’s temperament can influence the relationship significantly.

Temperamental Type: there have been numerous attempts to type people according to their temperament – ie: characteristic patterns of emotional response thought to be mostly innate. The system which has stuck the most and has had the greatest longevity is the angient Greeks’ concept of the 4 humours where personality is related to excesses of bodily fluids – viz:-
○ Phlegmatic – phlegm – reliable, passive, calm, unimaginative, etc
○ Choleric – yellow bile – restless, egocentric, changeable, hostrionic, etc
○ Melancholic – black bile – anxious, rigid, pessimistic, unsociable, etc
○ Sanguine – blood – playful, easy-going, gregarious, responsive, etc
The system is thought to have been first proposed by Empedocles and then popularised by Hippocrates. It was preserved and promoted to the wider world through the writings of the Roman physician Claudius Galen. Wilhelm Wundt brought it into modern Psychology and its descriptions are used pivotally in the works of Ivan Pavlov and most especially in the Dimensions of Temperament construct of Hans J Eysenck. The system is also partly reflected in the DISC concept of William Moulton Marston.Integrated SocioPsychology considers the possibility that temperamental types facilitate the dominance of the lower vMEMES – ie: PURPLE will find a natural home in a Phlematic personality and similarly RED with Choleric and BLUE with Melancholic. Where the vMEMES lock in to the temperamental type, then a centre of gravity is formed. There does appear to be some degree of relationship between Sanguine and ORANGE but it seems much weaker than it is with the 3 lower vMEMEs.

Temperamental Trait: a characteristic that that determine how someone reacts to the world.
These are mostly innate characteristics that people are born with – distinct patterns in behaviour throughout a lifetime. However, they can be influenced and altered by an individual’s family, culture or their experiences – sometimes leading to epigenetic modification.

Testosterone: a male sex hormone responsible for secondary male characteristics (such as beard growth and muscular development). It causes sperm to be produced and is associated with aggression. Females have small amounts of testosterone in their bodies.For his Dimensions of Temperament construct, Hans Eysenck attributed Psychoticism to high levels of testosterone.

Therapeutic Alliance: a term coined by L Luborsky to describe a high state of rapport between therapist and ‘client’ where they work together in a warm relationship. According to Luborsky (and several other studies), the quality of the relationship will influence the client towards achieving positive expectations.

Timelining: walking your timeline – either stepping along a laid-out physical representation or moving metaphorically along it in the imagination – has become a major form of therapeutic intervention in NLP. The concept was first developed by Tad James but many other ‘gurus’ have created enhancements and embellishments.

Transcendence: Abraham Maslow is wrongly quoted by many psychological authorities (who should know better!) as seeing Self-Actualisation as the ultimate level in his Hierarchy of Needs. Shortly before his death in 1970 Maslow, possibly influenced by Clare W Graves, identified a state of being beyond Self-Actualisation which he dubbed ‘Transcendence’. He saw it as connecting to something beyond the ego (selfplex) or helping others to find self-fulfillment and realise their potential. Transcendence parallels Graves’ H-U level (TURQUOISE in Spiral Dynamics). Jane Loevinger calls this level ‘Integrated’.

Trauma Resolution Experience: a powerful Inner Child exercise developed by Penny Parks for dealing with unresolved problems in parent-child relationships and other people significant in someone’s childhood. The exercise ties in with Object Relations concepts.

Triangling: process in which two family members lower the tension level between them by drawing in a third member.