Obedience: can be defined as the carrying out/execution of instructions/orders/commands of someone who is recognised to have the right to give a person such instructions/etc – ie: they have legitimate authority.
According to Stanley Milgram’s Agentic Shift Theory  (1974), when someone accepts such orders, they shift from being in an autonomous state and having free will to being in an agentic state and not having free will.

Obsessive-Compulsive Disorder (OCD): a serious condition characterised by undesirable – sometimes highly-disturbing – and intrusive thoughts and compulsive, often ritualistic behaviours. The behaviours, though not always obviously so, serve to compensate for, control or distract from the unwanted thoughts. Clare W Graves saw OCD as the result of emerging BLUE fighting back the impulses of RED which would fit with Carl Gustav Jung’s assertion that OCD was the intrusion into consciousness of threatening sexual and aggressive ideas being warded off through ritualistic behaviours and/or repeated verbal incantations.At a biological level OCD has been associated with problems in the caudate nucleus affecting signalling between the orbitofrontal cortex and the thalamus.

Oestregen: oestrogens are a group of compounds named for their importance in the oestrous cycle of humans and other animals. They are the primary female sex hormones.
While oestrogens are present in both men and women, they are usually present at significantly higher levels in women of reproductive age. They promote the development of female secondary sexual characteristics, such as breasts, and are also involved in the thickening of the endometrium and other aspects of regulating the menstrual cycle. In males, oestrogen regulates certain functions of the reproductive system important to the maturation of sperm and may be necessary for a healthy sex drive.

Operant Conditioning: first identified conceptually by Edward Thorndike (1905), this is leaning through the consequnces of behaviour – either reinforcement (reward) or punishment. (Thorndike talked of ‘stamping in’ and ‘stamping out behaviour.) See also Behaviourism.

Orbitofrontal Cortex: an area at the base of the frontal lobe which has s complex series of inputs from the thalamus, the olfactory bulb and the amygdala. Its outputs include the hippocampus, areas of the hypothalamus and the amygdala. It plays an important role in emotion. 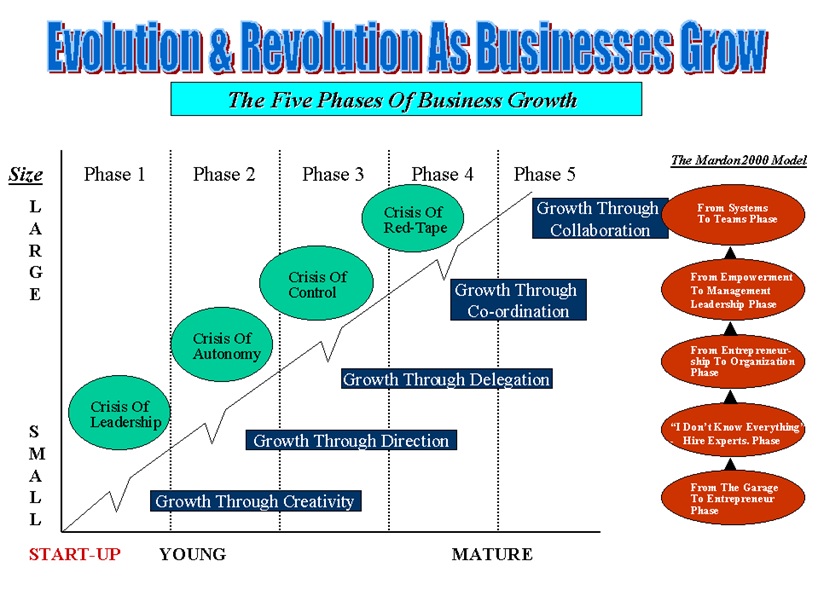 From a presentation copyright © 2000 Crispin Mardon

A number of researchers, business theorists and management consultants have proposed models of organisation lifecycle. One of the most important is that of Larry E Greiner (1967; 1972) – see above. His model shows that organisations tend to develop through stages – the transition to the next stage usually being marked turbulence and crises requiring significant action (revolution). In Greiner’s model each stage is both an effect of the previous stage and a cause for the next stage.
Although Greiner does allow that organisations, as they mature, must regain some of their small company thinking or they will decline, he focuses far more on the growth stages. Ichak Adizes’ (1987; 1996; 1999) model gives greater balance between what he calls ‘growing’ and ‘ageing’ phases. Another strength of the Adizes’ model is that he sees the stages as being dominated by mindsets or combinations of mindsets which Don Beck (1998; 2000a; 2002a) has stated are driven by vMEMES. Thus Entrepreneurship (E) is fuelled by ORANGE, Production (P) by RED and Administration (A) by BLUE. This enables analysts to assess suitable motivations of employees to create the appropriate mix of mindsets for the stage the organisation is in.
The graphic below compares the models of Greiner, Adizes and leading UK small business consultant John McMahon.