Eclectic Approach: where a psychologist or therapist will use the most appropriate models and techniques from whatever school or field, regardless of academic boundaries, to meet their clients’ needs.

Economic Determinism: the thesis, as advanced by Karl Marx & Friedrich Engels (1848) – though they did not explicitly use the term – that economic factors underlie all of society’s decisions.
Thus, the social relations specific to a particular mode of production are said to structure social relations between classes and are held to be the base underpinning the legal and political systems. This implies that all political, cultural, and social life can be predicted from the prevailing relations of production.

Ego: generally, an individual’s sense of self – though there are numerous connotations/sub-meanings related to the term.
Sigmund Freud (1923b) applied something of a different, quite specific meaning to ‘ego’ – it is a part of the Id-Ego-Superego tripartite mind. The Ego has the role of restraining the unacceptable desires of the Id and balancing the competing demands of the Id and Superego.|
To avoid confusion, in Integrated SocioPsychology Susan Blackmore’s (1999) term selfplex is usually preferred as the idea of ‘self’ – and all the schemas a person has that combine to form the sense of who they are. The PURPLE vMEME takes on many of the Freudian aspects of the ego, in seeking social acceptability within its family, group or tribe.

Ego State: used in Transactional Analysis, the term is used to describe an individual’s state of mind at any given point of time.

Egocentricism: the inability to see an object or situation from anything but one’s own point of view.
When the RED vMEME is totally dominant in the selfplex, that is when someone is most likely to uninhibited egocentricism.

Elaboration-Likelihood Model: developed by Richard Petty & John Cacioppo in 1981, this model aims to explain different ways of processing messages, why they are used and their outcomes in terms of attitude change. The ELM proposes 2 major routes to persuasion: the central route and the peripheral route.

Susan Fiske & Shelley Taylor (1991) term peripheral route processors cognitive misers. for the relatively little effort they put into analysing the argument. In Gravesian terms, these people will tend to be dominated by the PURPLE and RED vMEMES in their vMEME stacks. BLUE and the more complex vMEMES tend to prefer the central route and consider the issues, pros and cons, at length and in detail.
The ELM has been used in analysing and developing successful strategies in marketing, politics, health care, etc.

Elaborative Rehearsal: one of the 2 types of rehearsal identified by Fergus Craik & Robert Lockhart (1972) in their Levels of Processing model of memory. It involves the deep and meaningful analysis of information, rather than simply repeating it over and over.

Electra Complex: Carl Gustav Jung’s (1913) female version of Sigmund Freud’s Oedipus Complex (1899). According to Jung, the young girl in the Phallic Stage desires sexual intimacy with her father, just as Freud’s Oedipal boy wants such relations with his mother.
However, Freud (1920) explicitly rejected Jung’s version because it “seeks to emphasise the analogy between the attitude of the two sexes”. Freud persisted with his own, more complex view that the “feminine Oedipus attitude”, produced by penis envy, leads the young girl to desire having the father’s baby as a compensation for her lack of a penis.
Jung’s championing of the Electra Complex was almost certainly one of the final factors in the complete breakdown in the relationship between Freud and himself. Nonetheless, many notable commentators on psychological theory, who should know better, confuse the issue, when discussing Freud’s theory, by erroneously presenting the Electra Complex, as defined by Jung, as Freud’s concept.

Emic: a culturally-specific value, philosophy, norm or behaviour.
Eg: one man/one-woman marriage is an emic practiced in most Western countries but it is not universal. Many countries in North Africa have an emic of allowing one man to marry up to 4 wives. In Tibet, under certain circumstances, a woman can marry 3 men.
See etic and imposed etic.

Emotion Work: is the management of one’s own feelings or “work done in a conscious effort to maintain the well being of a relationship” (Arlie Hochschild, 1979).
Examples of emotion work include showing affection, apologizing after an argument, bringing up problems that need to be addressed in an intimate relationship – or any kind of interpersonal relationship – and making sure the household runs smoothly. Cultural norms often imply that emotion work is reserved for females.

Emotional Labour:  the term ‘emotional labour’ was first used by the sociologist Arlie Hochschild (1983) to describe emotional regulation wherein workers are expected to display certain emotions as part of their job, and to promote organisational goals. The intended effects of these emotional displays are on other, targeted people, who can be clients, customers, subordinates or co-workers.

Empiricism: a broad-based philosophical position grounded on the fundamental assumption that all knowledge comes from experience and observable reality, as opposed to logical reasoning or a priori categories.

Endocrine System: governed by the autonomic nervous system, the endocrine system is a system of ductless glands in the body that produce hormones

Endogenous: to do with internal causes – eg: Endogenous Depression might be the result of hormonal changes.

Enneagramme: with some arguing its roots are in Sufiism while others point to connections to early esoteric Christianity. , the Enneagramme describes 9 different patterns of thought, feeling and action and the relationships between the types. Each of the 9 types is rooted in a specific viewpoint or belief structure that largely determines what is important to a person and how that person interacts with the world to fulfil their hopes and dreams. Very basically, the 9 types are:- 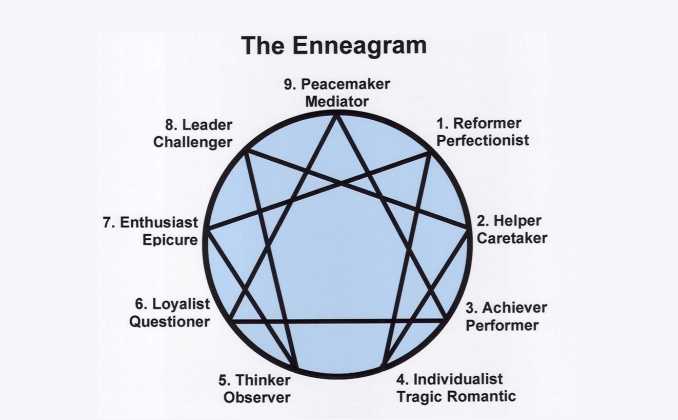 The Paris-based L’Institut Français De L’Ennéagramme has been working on a project to explore how Enneagramme typing fits with the concept of vMEMES. The Article, Spiral Dynamics and The Enneagram captures some of their work.

Environment of Evolutionary Adaptiveness: the EAA is the period in our ancestral past when many of the adaptive changes associated with the evolution of human behaviour took place – between 35,000-3,000,000 years ago.

Epigenetics: the study of how nurture shapes nature via epigenetic modification to produce the phenotype from the genotype – in other words, how you become who you are from your genetic potential.
In crude terms, this concerns the influence of environmental factors as to which genes are turned on and off.
Unsurprisingly epigenetic effects tend to increase with age as the individual has more experiences.
Epigenetic modification is almost certainly the process by which life conditions trigger the emergence of the next vMEME in the Spiral hierarchy. It is also a form of Reciprocal Determinism.

Epistemology: the study of knowledge – especially the scope and methods of acquiring knowledge and testing its validity.

Equilibrium: the term is used in the behavioural sciences as a synonym for balance, with several different applications…
The point at which opposing biochemical reactions are stable – ie: homeostasis.
In Jean Piaget’s (1923) theory, the cognitive state whereby the information available to a child (memes) is in balance (at least, temporarily) with the existing schemas.
A state of balance between parts within a social system and/or in relation to its external environment.
According to Vilfredo Pareto (1935), a social system is in equilibrium if, when it is subjected to some modification, a reaction tend to take place, tending to restore it to its previous ‘normal’ state.

Equity Theory: is concerned with whether the distribution of resources or rewards is fair to the relational partners. Equity is measured by comparing the ratio of contributions (or costs) and benefits (or rewards) for each person.
It was developed originally as a psychological approach to employer-employee relationships by J Stacy Adams (1963) who who asserted that employees seek to maintain equity between the inputs that they bring to a job and the outcomes that they receive from it against the perceived inputs and outcomes of others. Inequalities in relationships will cause those within it to be unhappy to a degree proportional to the amount of inequality.
Equity Theory was used by Elaine Hatfield, G William Walster & Ellen Berscheid (1978) to develop Social Exchange Theory more completely in its application to romantic relationships. In essence Equity Theory proposes that where one partner in a relationship gets significantly less out of the relationship than the other – ie: the relationship is unequitable – then the partner with less will strive to establish/restore a balance. See Romantic Relationships: Economic Theories.

Ethics: concerns regarding what is acceptable human behaviour in pursuit of certain personal or scientific goals.
The professional bodies in most countries produce ethical guidelines for researchers and practitioners. See also Ethical Issues in Research.

Ethological Approach: the study of animal behaviour in natural environments, emphasising the importance of inherited capacities and responses.

Ethnic Groups: people with common cultural traditions and sense of identity. History, language, race, geography and/or religion may all be factors that contribute to a group’s sense of unique identity and community cohesion.

Ethnocentricism: the belief that your own in-group – eg: religious group, nation, gender, etc – is superior to other cultures.

Etics: universals of values, philosophies, norms or behaviours.
All known societies have a means of regulating male/female sexual relationships and the upbringing of children from these relationships. Usually male/female relationships are regulated through some form of marriage and the parents form some form of family. Thus, marriage and family are universal etics. However, the form the marriage will take – eg: one man/one woman or one man/several women – and the form the family – will take – eg: nuclear, extended, single parent – are very much culture-specific emics.
See also imposed etic.

Evolutionary Psychology: this approach uses Sociobiology as well as social and cognitive factors to explain behaviour in terms of its evolutionary adaptiveness. Increasingly it has come to be dominated by Sociobiology – emphasising the ability to survive and reproduce the individual’s genes in face of changes in the environment.

Exogenous: to do with external causes – eg: Exogenous Depression might be triggered by the death of a loved one or losing your job.

Experimental Realism: the extent to which an investigation is experienced as a ‘real life’ scenario by participants because it is interesting or attention-grabbing.

Extended Family Field: a person’s family of origin plus grandparents, in-laws, and other relatives.

Extinction: the disappearance of a learned response when stimuli stop being paired (Classical Conditioning) or no reinforcement occurs (Operant Conditioning).

Extraversion: the terms ‘introvert’ (someone focussed inward and preoccupied with their own thoughts) and ‘extravert’ (someone outgoing and frequently the ‘centre of attention’) were coined by Carl Gustav Jung (1921) who concluded that these ‘psychological types’ were essentially innate.
Extraversion and Introversion were then incorporated as a key scale – rather than rigid polar opposites – into the Jungian-derived Myers-Briggs Typing Inventory. Extraversion has also featured in Raymond Cattell’s (1957) much-lauded 16 PF and attempts to create a Big 5 psychometric from it. However, the most credible work on Extraversion is that of Hans J Eysenck (1947; 1967) who made it one of his biologically-determined Dimensions of Temperament.
Integrated SocioPscychology considers the possibility that how introverted or extraverted someone is may influence the manner in which they ascend Clare W Graves Spiral. It may be that introverts tend to ascend more via the self-sacrifice/conformist side and extraverts more by the express-self side.