Home » Global » What is Globalisation?

“Despite huge differences in distance, upbringing and social context, many of us now listen to the same music, read the same books and watch the same films and television. Youth in Soweto listen to LA rap; viewers in southern China’s Guandong province watch pirated tapes of Jackie Chan; Sri Lankan refugee kids in Toronto come home from school to settle down in front of Tamil movies rented from the local grocery store. Teenagers and their young siblings in almost every place on earth know Bart and Lisa Simpson. I can sit at my home computer downloading the latest comminqués from Mexico’s indigenous Zapatista rebels and out of the corner of my eye watch the World Cup live from Korea on the TV in the next room.”

Peter Steven (2004, p16-17) is describing the communication aspect of globalisation. Alan Cochrane & Kathy Pain (2000) describe other aspects:-
“Drugs, crime, sex, disease, people, ideas, images, news, information, entertainment, pollution, goods and money now all travel the globe. They are crossing national boundaries and connecting the world on an unprecedented scale and with previously unimaginable speed. The lives of ordinary people everywhere in the world seem increasingly to be shaped by events, decisions and actions that take place far away from where they live and work.”

Globalisation can be described as the emergence of a global economic and cultural system which is integrating the peoples of the world into a single global society.

Theories of globalisation
However, there are issues in trying to define just what ‘globalisation’ is, with John Wiseman (1998) commenting: “Globalisation is the most slippery buzzword of the late 20th Century because it can have many meanings and can be used in many ways.”

Wiseman’s reservations about a hard definition of ‘globalisation’ are reflected in Cochrane & Pain’s identification of 3 basic positions on the issue of globalisation:-

Cohen & Kennedy conclude that such ‘transformations’ lead to a new depth of appreciation that the world is a single place. Anthony Giddens (1999), displaying something of a Move Away From meta-programme characterises globalisation as a ‘runaway world’ featuring common tastes and interests, change and uncertainty, and a common fate. Giddens (1990) and Ulrich Beck (1998) postulate that the immediacy of global communication means it is difficult for people to avoid acknowledging that we live in a world characterised by risk – eg: terrorism, global warming and war. This awareness may result in a broadening of identities – especially where people champion particular causes around issues such as debt relief or the environment.

Leslie Sklair (2003) describes TNCs as being able to produce and market internationally. They rarely have a single home or national base and their income comes increasingly from outside the original home country. They shift frequently to the cheapest/most efficient production locations to get competitive advantage and to maximise profits. TNCs have the geographical flexibility to shift  resources and operations across the world. As they spread into other countries – especially in the developing world – they recruit members of the local elites onto their regional boards. In this way, the TNC mesh their global interests with those of local power brokers.

An example of outsourcing work to a cheaper location is the British computer company ICL  subcontracting its software design to a  company in Pune, India. The Indian software  designers are paid the equivalent of about  £3,000 per year, 10 times less than an  equivalent worker in Britain. UK customers  calling ICL software are put through to engineers in Pune.

3/4 world trade is via TNCs which account for 1/3 global economic output. Disturbingly some estimates put 1/3 of all trade within the global economy as between branches of the same corporations. There is increasingly a trend towards monopolies and frequent mergers between corporations – particularly so in banking and mass  media. Eg: the 10 largest corporations in  telecommunications now control more than 86% of the  global market.

Approximately 130 nation states (mainly in the developing world) have economies  smaller than the top 50 TNCs. Of the world’s top 100 most important  economic units, approximately half are  nation states and half are TNCs. The table shows how in 2001 revenue (in $M) from the  largest companies in the world matched  national economies. 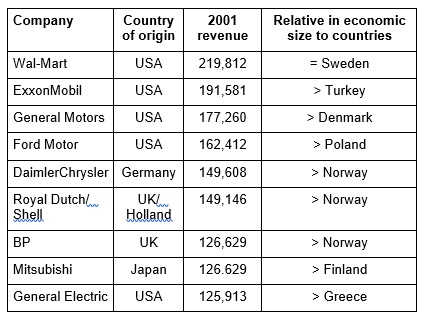 The combined annual revenues of the biggest 200 corporations are bigger than those of 182 nation states – ie: 80% of the world’s  population. This is 18 times the combined annual  income of the 1.2 billion poorest people.

Another way of analysing the 2001 figures is  that there were 240 TNCs earning in excess of $20B per year while 71 of the 132 countries with a population over 2 million had  a gross national income of less than $20B.

This trend has increased througout the first years of the 21st Century. Philip McMichael (2011) states that the combined annual revenue of the 200 largest TNCs exceeds the GDP of the 182 nation states containing 80% of the world’s population. He cites BP as bigger than Finland and Chevron as bigger than Ireland.

Sklair (1993) writes: “Such well-known companies as Ford,  General Motors, Shell, Toyota, Volkswagen,  Nestlé, Sony, Coca-Cola, Kodak, Xerox (and  many others most of us have ever heard of)  have more economic power than the majority  of the countries in the world.”

Sklair’s point is illustrated by Forbes magazine’s 2013 assessment that 37 of the 100 largest economies in the world were run by TNCs rather than countries.

Interestingly Raymond Vernon (1971)  foresaw the transfer of power from the nation state to the TNC when he wrote: “Suddenly,  it seems the sovereign states are feeling  naked. Concepts such as national  sovereignty and national economic strength  appear curiously drained of meaning.”

TNCs or MNCs?
Paul Hirst & Grahame Thompson (1996) distinguish between TNCS  operating in a ‘globalised economy’ and  ‘multinational corporations’ (MNCs) operating  in an ‘international economy’. TNCs are globally-based and ‘footloose’.  They have an international management  team and are potentially willing to base their  operations, including, if necessary, their  headquarters, anywhere in the world. In contrast, MNCs have a national base, which is important to them, and a ‘home  government’.

Hirst & Thompson compared the 1987 sales, assets and profits of 500 comporations with  the sales and assets of more than 5,000 corporations in 1992-1993 as a test whether corporations were still MNCs or had  transcended into TNCs. They found that  home-based activities dominated in  measures such as the number of subsidiaries and affiliates, the location of assets and the place where profits were made. Eg: in 1992-1993 75% of German and  Japanese, 67% of American and 65% of  British manufacturing corporation sales were in the home region/country. From this the researchers concluded that MNCs were dominant in an international, rather than  globalised, economy.

Hirst & Thompson’s distinction between  TNCs and MNCs is far from universally  accepted. It is seen as being over-picky and  largely unfounded. Sklair (2003) points out methodological  issues with the research – eg: with home  regions…

Whatever the criticisms, Hirst &Thompson  do draw attention to the fact that TNCs are not a distinct, homogenous entity; but, in fact, there are variations of TNC. For some the ‘national base’ is clearly much more important than it is to others.

Hirst & Thompson do concede that nation-states have lost economic power in a globalised world. However, they do contend that TNCs – or at least those corporations which could also be described as MNCs – have national headquarters, reflect national cultures, are regulated by the ‘home government’ and depend on the nation state’s institutions and support for their activities. They see the state as a “facilitator and orchestrator of private economic actors… It still retains one central role that ensures a large measure of territorial control – the regulation of populations. People are less mobile than money, goods or ideas: in a sense they remain ‘nationalised’, dependent on passports, visas, and residence and labour qualifications.”

TNC’s control of money and power
Critics are concerned that TNCs, along with the World Bank and the International Monetary Fund, are pressurising less economically- powerful countries into opening up their economies to Western private investment. Eg: American private healthcare companies have influenced the WTO to ‘encourage’ the privatisation of healthcare in developing countries. Even more of a concern is emerging evidence that TNCs are starting to target water for private investment in developing countries. Companies such as Shell and AT&T are virtually able to dictate the terms under which they will exploit oil resources or install telecommunications systems. For the most part, the agreements they extract reinforce their position of global importance. John Bunzl (2013) sees the massive and ever-increasing economic muscle of the TNCs pushing most nations into what he terms ‘destructive international competition’ to vie for their investment

Marxists have expressed great concern about  the deregulation of global finance which, together with the advent of the internet and email, has led to massive movements of money  around the globe. Said E Dawlabani (2013) sees this deregulation, begun under Margaret Thatcher and Ronald Reagan, as the legitimisation of debt as a financial instrument for investment and the beginning of the road to the 2008 global crash when debts in the financial systems were so large as to be unsustainable. Dawlabani (p210) describes these financial  investment strategies as “bets masquerading as complex financial instruments”.

Particularly concerning is transnational finance  corporations engaging in currency speculation  for profit. This has resulted in the destabilisation  of currencies, both in the developing and the developed worlds, resulting in increased  unemployment and loss of savings. The forced departure of the UK from the European Exchange Rate Mechanism in 1992,  due to the actions of currency speculators like  George Soros, was one of the earliest  examples of currency speculators damaging an  economy. (In this case, a relatively powerful  one.) Some of the ongoing problems in the ‘eurozone’  are due, in part at least, to speculators targeting  the euro through weak economies like Greece,  Eire and Portugal. The 2008 financial crash, requiring banks in a number of countries to be bailed out by their governments, is reckoned by the IMF to have cost taxpayers worldwide $1.4T.

Evaluating the role of TNCS in globalisation
Wayne Elwood (2001, p61-62) clearly perceives some benefits in the way TNCs drive globalisation, writing: ‘They are at the cutting edge of technological innovation and they can introduce new management and marketing strategies. It’s also true that wages and working conditions are usually better in foreign subsidiaries of multinational companies than they are in local companies.”

Philippe Legrain (2002), a former special adviser to the Director-General of the WTO, acknowledges 4 main criticisms of the WTO:-

But Legrain also defends the WTO and  globalisation by suggesting:-