PART 2
Beck’s legacy
A personal annecdote…in June 1999 I fell into conversation with a group of visiting South African students in Leeds. To my surprise, they not only knew of Don Beck but regarded him as something of a ‘political hero’. (2 of them had actually seen him speak at a university appearance.) One of them told me that, thanks to Beck’s work, race would be a dead issue in South Africa inside 5 years – and these students were from the Transvaal, hard Boer Afrikaner stock from an inherently-racist tradition!

Race-as-a-dead-issue has proved hopelessly optimistic but the students’ comments give a flavour of just how much impact Beck and Clare W Graves’ ideas had in South Africa in the 1990s.

In an August 1993 interview with Padraig O’Malley, archived on the Nelson Mandela Foundation web site, Hall, explains the  model Beck used in South Africa: “Donald Beck, he’s the American sort of sociologist who has been working in this country with my companies for a long time and he makes it very complicated, I simplify everything – as you know. So level one is a hunter/gatherer, level two is a tribal collectivist, level three is people that have urbanised, come into the townships, no tribal support system so they survive on their own and they have very short term survivalistic goals so the youth are quite often in that category. And level four is once again a strictly Calvinistic type of structured society and that’s why quite often in our businesses an Afrikaans foreman gets on incredibly well with migrant labour. They both come from a similar collectiveness value system. And then you move into level five, an entrepreneurial, business skills, lower level crooks, higher level businessmen and so on. It’s either mumbo-jumbo or it’s not but it happens to work for me…. That’s probably too simplistic. You should have a chat to Don and he could make that last for two hours.”

Beck’s own account of his early work in South Africa is given in ‘The Crucible: Forging South Africa’s Future’, co-written with Graham Linscott in 1991. The book was dedicated to Clare W Graves as he had died in the Winter of 1986 before he could witness the first large scale application of his seminal work.

After the establishment of multi-cultural democracy, Beck was commended by both now-president Nelson Mandela and the chief minister Mangosutu Buthulezi and honoured by a joint resolution of both houses of the Texas Congress. Below is an extract from the joint resolution, initially proposed in the House of Representatives:-

By Hunter of Taylor

1-1 WHEREAS, The Texas House of Representatives takes great pride

1-3 his invaluable contributions toward the peaceful creation of a

2-2 WHEREAS, In 1979 this outstanding educator resigned his

2-4 fully toward ending apartheid in South Africa, a decision that

2-5 received strong support and required great sacrifice from his

2-6 loving wife and children; and

2-7 WHEREAS, During the next 15 years, Dr Beck worked behind the

2-9 investors and owners, and international diplomats to develop

2-10 successful strategies for attaining a more peaceful transition of

2-11 power in that troubled nation; during the final four years of this

2-12 transformation, he was the only private citizen from the United

2-13 States directly involved in the high-level negotiations that

2-15 triumphant dissolution of the apartheid regime; and…let it be

RESOLVED, That the House of Representatives of the 74th Texas

3-4 extraordinary contributions toward peace and understanding in South

3-6 for success and happiness in their future endeavors; and, be it

3-8 RESOLVED, That an official copy of this resolution be

The complete Senate version of the resolution can be accessed here (courtesy of Don Beck). 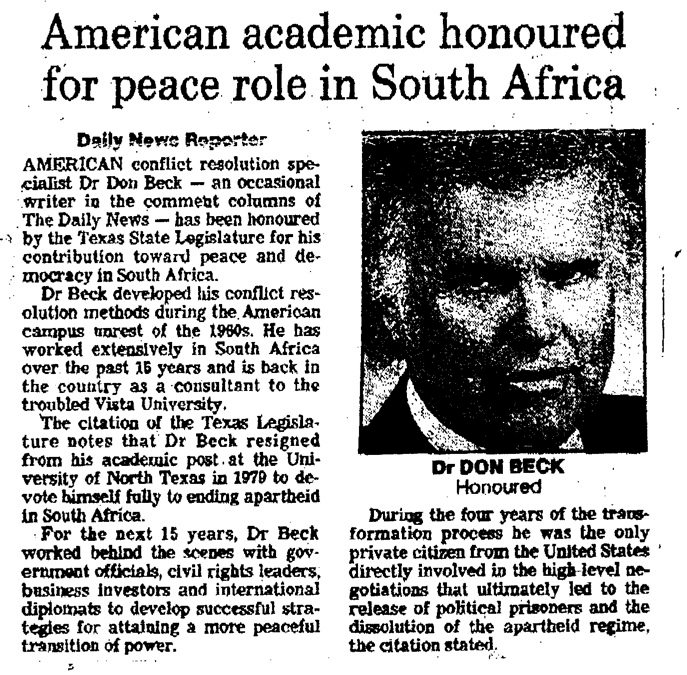 The quality of the relationships Beck developed during the South African is perhaps best summed up by Maalouf (2014, p48) who describes “a meeting in Oslo where Beck and DeKlerk came together to converse like old friends, once again long after significant lifetime events have passed.” 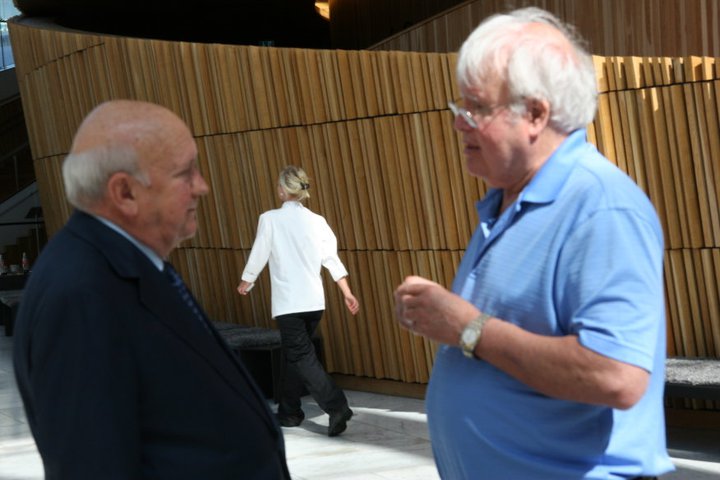 Mandela’s passing and South Africa’s future
Following the publication of ‘The Crucible’, Linscott published his own book ‘Uhuru & Renaissance: South Africa in a New Century’ in October, 2001. In it he uses Spiral Dynamics to look at how values have influenced African and world history in the 20th Century. It also considers how using a different approach can be beneficial to help understand the African continent as a whole.

Don Beck himself returned to South Africa in late 2013, as he told Volckmann: “I had a call from Stollenbosch University School of Business Executive Development, close to Cape Town, asking if I would come out and restart the process. Of course, I accepted. They said that the title of the work would need to be South Africans reinvent themselves for the 21st Century.

What we are doing is taking leaders back to 1994, the day after Mandela was inaugurated in Union Building. The question was then posed: ‘Knowing what you know now, 20 years later, what would you have done differently then?’ That stirred up the most interesting insights, because now they have the advantage of 20 years of experience.

What I’ve sensed from the people I’ve talked to before I went and certainly while I was there is that they have reached the end of the Mandela era where harmony and non-racism were the keystone. But in spite of all that, the wheels are coming off big time, because when they didn’t follow what Graham Linscottt and I recommended in ‘The Crucible’. F W DeKlerk, last State President of apartheid-era South Africa, was speaking in Dallas recently. I asked him about it and he said that they wanted to do that, but The African National Congress wanted power and they went down a track of instant gratification and plundering the country and simply handing off German motorcars to the black leaders. The needs of people were not met, because they weren’t getting to the critical issues.”

The Stollenbosch promotional material stated: “Beck’s spiral dynamics approach was the basis for the creation of the Peace Committees and the subsequent CODESA process in the run up to the first post-apartheid elections in 1994“.

Nelson Mandela died while Beck was in South Africa. He summed up reaction in South Africa for Volckmann: “Even though everyone knew that it was going to happen, it was still a shock. Of course, the word passed quickly and what you probably saw from Western television, all the celebration, all the toitoi, it’s called. South Africans recognised that it was not a time to mourn. It was a time to celebrate and to honour a man who was like their George Washington and more. He was recognised globally as one of the four or five global leaders for whom there is a mutual respect from virtually everywhere.”

Of the great statesman himself, he said: “…the contribution of Mandela was that he had an open system. He was pretty communist so I can tell you he went to conferences in Switzerland and heard the nature of the Fifth Level business system. He came back a changed man. Consequently, South Africa has as its advantage far less racism than in our own country, thanks to Mandela…. I kept warning during the transformation days – it’s not going to be a civil war. Rather, South Africa has a chance of being that much more, both white and black, thanks to Mandela once again.

Mandela would never talk to me about black or white, because he truly believed in a non-racial South Africa.” 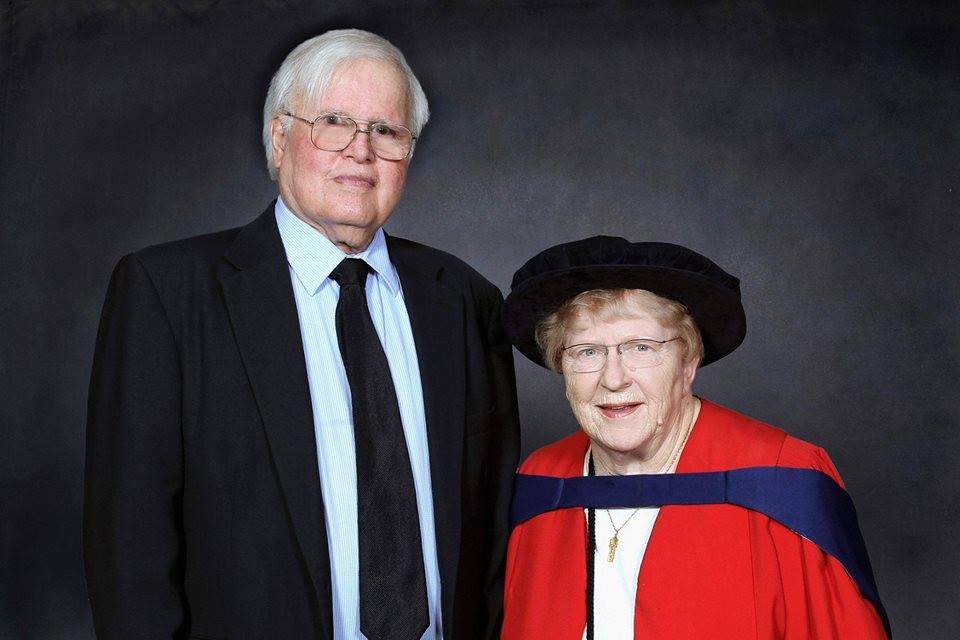 Thanks to Rica Viljoen, Loraine Laubscher, Russ Volckmann and Elza Maalouf for permission to quote extensively from their work.