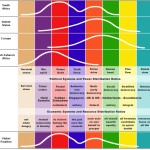 by Alan Tonkin As the crisis in Zimbabwe worsens and the country slips further into turmoil, Alan Tonkin has forwarded this piece he wrote for the Global Values Network web site he runs. GVN is one of the most advanced projects in the world at using Spiral Dynamics to monitor shifts in societies and assess impacts at national, international and even global levels. Alan’s piece not only presents an incisive analysis; it draws attention to both the very real human tragedies being experienced in Zimbabwe and the dangers which could engulf the region if the country is allowed to implode. I am honoured to publish Alan’s work as a ‘guest blog’. Different politics – different world views The issue of the release of the final Zimbabwe Election results is being contested by both ZANU-PF and the Movement for Democratic Change but for very different reasons.  Before going into these reasons one needs to look behind the claims and counter claims in order to more fully understand why there is this dispute. Zimbabwe: a brief review of recent history Going back over the period following the Second World War, Southern Rhodesia was still a British colony which in 1953 was incorporated into the Federation of Rhodesia &… Read More

So that old agent provacateur extraordinare, Tariq Ali, has attacked the naming in Benazir Bhutto’s will of 19-year-old son Bilawal as her successor as leader of the Pakistan People’s Party, describing it as “a digusting medieval charade” (His article was the front page lead story in the New Year’s Eve edition of The Independent – and he appeared on that morning’s editon of BBC Radio 4’s Today programme, reiterating his position.) In describing the succession of Bilawal as “medieval”, Tariq was spot on! Moreover, his description of Asif Zardari, Bhutto’s widower (and Bilawal’s father), as a “feudal potentate” – a Lord Chancellor or Grand Vizier? – who will run the party until his son is old enough, is also pretty close to the mark. Where Tariq misses the point is to call it “disgusting” and a “charade”. He goes on to say: “How can Western-backed politicians be taken seriously if they treat their party as a fiefdom and their supporters as serfs, while their courtiers abroad mouth sycophantic niceties concerning the young prince and his future?” The point is: this is very much how the politcians in Pakistan must act if they wish to design an alternative government to the military dictatorship… Read More

Inside the Mind of a Suicide Bomber…?

“Their cause is not founded on injustice. It is founded on belief, one whose fanaticism is such that it can’t be moderated. It can’t be remedied. It has to be stood up to.” – Tony Blair, London, Saturday 16 July 2005. In every point in that statement, other than the first one, Tony Blair is correct. In saying it is not founded on injustice, he makes a fundamental error. Injustice, in fact, feeds their cause. Back in the Autumn of 2001, I was seriously impressed with the way Blair went around the capitols of the Middle East and Asia, persuading the kings and the sheiks and the generals and the dictators that, if they would not openly support the imminent American onslaught on Afghanistan, then at least not to publicly oppose it. He learned passages from the Qur’an to support his case with Muslim leaders. For a time I actually wondered if Blair could do 2nd Tier thinking. What he did was certainly way beyond the red/BLUE simplistic black & white thinking of George W Bush. However, Blair’s support for Bush’s 2003 war on Iraq showed a distinct dearth of global or strategic thinking. Defeating the military of Saddam Hussein, seriously degraded… Read More