The 21st Century Group (1997-2001) was a pioneering network of SMEs (small-medium-sized enterprises) which attracted national – and even international – attention.

When I joined Business Link Wakefield & District in January 1997, part of my remit was to establish a network of manufacturing and engineering SMEs. Previous attempts to establish such a network had been abandoned, usually within 6 months, in face of massive indifference from local businesses.

In general, local response to training and consultancy initiatives promoted through the Business Link, Wakefield College, Mid-Yorkshire Chamber of Commerce & Enterprise and other institutions was decidedly poor. (If more than a handful of business people turned up to an event, it was considered an unequivocal success!) Yet annual surveys by Wakefield Training & Enterprise Council had revealed repeatedly a lack of innovation, competitiveness and ‘best practice’ amongst businesses in the District. So it was hardly as if many local companies couldn’t have benefited from help…! Relations between local businesses and the ‘business support agencies’ generally could be described at best as ‘mediocre’ – in so far as local businesses even recognised the existence of the agencies!

The Business Growth Forum launched in March 1997 was, in name at least, a revival of one of Wakefield TEC’s previous failed attempts to create a sustainable business network. For the first 8 months of its existence, the ‘new’ BGF seemed fated to go the same way as its namesake; in spite of attracting some local media attention, its quarterly meetings struggled to attain viable attendance figures.

However, during late Summer 1997 I became a key figure in arranging a conference, Preparing for the 21st Century: Supply Chain Management, which took place in the November. Working with me were Phil McMahon from ISCAN (Innovative Supply Chains & Networks) and the lead Business Link Advisor, Steven Beevers. McMahon had the contacts to bring in some innovative medium-sized companies to present at the conference. Not really big companies that SMES couldn’t relate to; but medium-ish ones that not so long ago had been SMEs themselves. Beevers, who had shown only a passing interest to date in the BGF meetings, was that rare creature: a Business Link Advisor who was held in very high esteem by his small but devoted band of ‘portfolio clients’. When he asked them to come to the conference, they came as a favour to him. Some of them even bought some of their customers and suppliers. The conference was a huge success, with many of the attending SMEs saying they were interested in more of the same.

In a fever of excitement at actually having praise heaped on us by businesses, McMahon, Beevers and I revamped the BGF, making its meetings monthly and concentrating on getting the conference attendees back. When they came, the BGF team were ready for them. Although we knew only a little of the concepts at the time, we unwittingly pitched it at Bateson Learning Level 2 – learning how to learn/challenging mindsets – using the structure of a fictional company. We made the participants the Board of ‘Grapevine Ltd’ and threw various problems at them to solve – along with a little instruction in ‘Best Practice’.

The participants found this a powerful tool for learning. On personal recommendation, more people came to the monthly meetings which were soon running right through from 5:30 to 9 PM – and often beyond, with it being a real problem on occasion to persuade what were now ‘Members’ of the renamed ’21st Century Group’ (after the conference!) to go home. (The name change was to reflect the forward-thinking nature of the network.)

It was at one such meeting in April 1998 that discussions between Ian Woodhouse of Fabtech, Margaret Wood of ICW (UK) Ltd and Jack Holt of Stelram Engineering served as a key catalyst in the founding of the Wakefield Manufacturing Partnership. 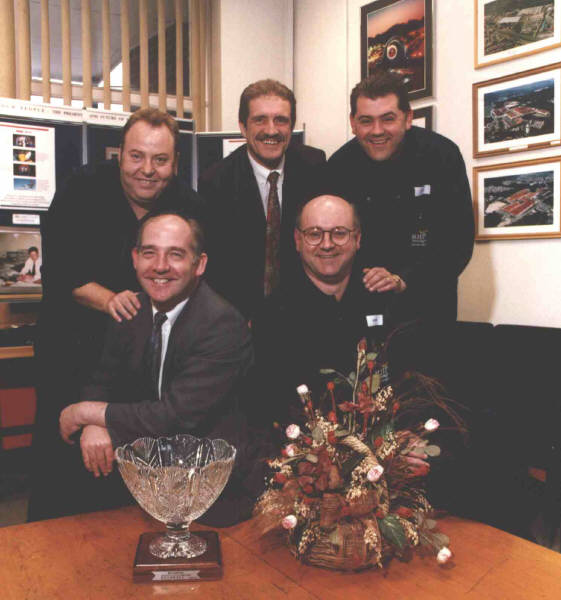 One of the contributing factors to those discussions had been the involvement of most of the Members in a 21st Century Group ‘special workshop’ on Kaizen, held at RHP Bearings in Knottingley in early March.

The workshop was the result of my involvement in the Management Development Forum, a struggling initiative led by Wakefield College to encourage businesses to invest more in training programmes being offered via the local business support agencies. I persuaded the College and the Business Link to bring the MDF agenda and resources into the 21st Century Group.

Being exposed to Kaizen concepts in that way opened up many new possibilities for several Members of the former BGF. This success also brought the College completely on board with the Business Link.

The real step change, though, took place later in March when Don Beck & Chris Cowan were brought over from Texas to introduce Spiral Dynamics to the Business Link. On the back of that John Lavan & Christopher Cooke of Hidden Resources were contracted to deliver an open programme of ‘Change Management’ workshops in the April. 21st Century Group Members composed around 70% of participants. The content of the workshops were mostly Spiral Dynamics and NLP.
Virtually everybody who came to the  workshops and wasn’t already in the 21st Century Group now became a Member.

With both the Business Link Advisors and  the 21st Century Group Members  exposed to such powerful models, it was possible to give the network an overt Change Management profile and to work directly with radical concepts. Indeed the Members themselves demanded that there be no more Bateson Level 1 – applied learning – in the Group! In the July it was relaunched as a Change Management network.

The Grapevine format was abandoned in favour of introducing a variety of linked models, techniques and exercises. Working closely with me at this time were Ian Lavan from the Business Link and Barbara Gomersall from Wakefield College. Ian, an NLP Master Practitioner and one of the first people in the UK to be trained in Spiral Dynamics, had been instrumental in bringing Beck & Cowan to Wakefield.

Amongst the tools the 21st Century Group worked with were:- 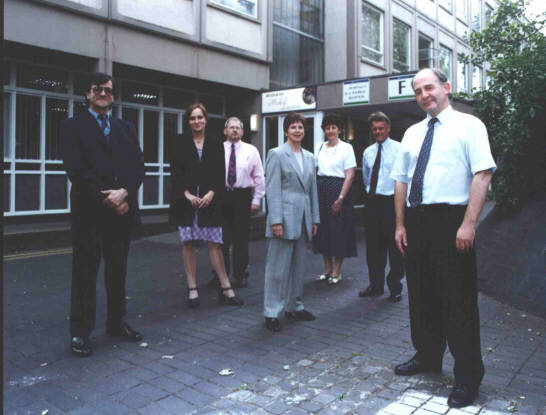 Whilst there was a high content of teaching in the sessions, there was also a lot of fun. Members enjoyed coming to the Group!

By the beginning of 1999 the 21st Century Group had successfully introduced charging – at its peak there were 34 paying members – and co-opted several Members onto a Management Committee which met monthly to ensure the network had a practical, company-led focus. The employer-representatives included Jack Holt, Margaret Wood, Steve Smith of Euro Motor Campers Ltd, Jacqui McKenna of BMK Shopfitting and Lloyd Thomas of Cobra Railfreight Ltd. Originally targeted at manufacturing and engineering companies, the Group eventually included software consultants, a recruitment agency, a couple of training providers and a children’s nursery as well.

Eventually some of the Members began delivering sessions. Jacqui co-presented a session with me on applying the Gravesian approach while Lloyd led separate sessions on psychometrics and time management.

For a while, funded through Wakefield College, there was even a small spin-off group, META 21, which aimed for Bateson Level 3 experiences – learning how to learn how to learn. This had business people exploring their own consciousnesses through such means as advanced NLP techniques, shamanistic rituals and even a North American Indian sweat lodge! Ian Lavan got Business Link Wakefield to partner Hidden Resources in putting on a diploma course in NLP for small businesses – the first of its kind in the UK – while he and Barbara Gomersall got the Business Link and Wakefield College to put on jointly a couple of introductory workshops to the Gravesian approach. 2 Members – Chris Hopkinson of Lemmeleg Building & Construction Ltd and Margaret Wood – even ended up eventually on the Business Link board.

Such was the success of the 21st Century Group that the neighbouring Business Links of Barnsley and Calderdale & Kirklees began negotiations to set up duplicate groups in their areas. Employer representatives from the Wakefield Group’s Management Committee even offered to help them recruit businesses! Links were formed with St Thomas à Beckett School and the Occupational Therapy section of Wakefield Health Authority. Barbara Gomersall and I prepared an application on the 21st Century Group for the National Training Awards. It was deemed too radical to receive an award but did rate a ‘special mention’.

Unfortunately, this kind of ‘not-quite-getting-it’ thinking permeated the Senior Management of the Business Link. Periodically they tried to push Bateson Level 1 onto the network – usually with amusing results!

When an expert solicitor in employment law was brought in to talk to the Group about the imminent introduction of the Working Time Directive, he found the Group suggesting to him easy and practical ways of complying with the legislation which he hadn’t yet thought of. (He went away with several pages of notes!) A Department of Trade & Industry advisor on the SMART Award got an altogether rougher ride. Afterwards he told me: “Nobody prepared me for this. I didn’t realise they were so volatile – so passionate!”

Michael Maude, a leading consultant at the DTI’s Innovation Unit, came up to Wakefield to find out more about the 20th Century Group. After attending a Group session, he met with Ian Lavan and some of the Senior Management at the Business Link and Wakefield TEC. After listening to the Senior Management’s Bateson Level 1 concept of the 21st Century Group, Maude told them: “That is not what I saw. What I saw was worldbeating!” Maude went on to say he had heard of nothing like it in either Europe or North America.

When the 21st Century Group debated Business & Education (using the Disney Strategy) in May 1999, both the Chief Executive of the TEC and the Principal of the College asked for a full briefing on their conclusions. (The College included some of the Group’s less radical suggestions in their next Action Plan.) However, when the 21st Century Group debated the quality of business support in February 2000 – and found it wanting! – the powers-that-be at the Business Link decided it needed constraining. A ‘plan’ for the 21st Century Group was prepared by Senior Management and one of their representatives now sat in on all the monthly Management Committee meetings to steer the Group in the ‘right’ direction.

Shortly after, the proverbial ‘wheels’ started coming off. Barbara Gomersall had already left the College to pursue her career while ISCAN had decided they needed Phil McMahon elsewhere. Their replacements, while well-intentioned, lacked the knowledge, understanding and experience built up over 2½ years in which the Advisors had been on almost as great a learning curve as the Members. Steven Beevers left the Business Link after the Wakefield Manufacturing Partnership, which he had nurtured at great effort, fell apart through personality conflicts.

The Business Link itself was at the start of the process of being absorbed into the new Business Link West Yorkshire under the Government changes in training and business support which saw the TECs abolished and the Business Links coming under the overall management of the Small Business Service. Consequently, with jobs on the line, the eyes of Senior Management were increasingly turning inward. My contract was allowed to lapse in the Summer of 2000 – my position having gone from employee to self-employed sub-contractor in October 1998. Of the core group of Advisors who had grown with the 21st Century Group, only Ian Lavan was left, trying to inject some Bateson Level 2 creativity into what was becoming increasingly an imposed Level 1 structure. Jack Holt told me in January 2001 that he no longer attended 21st Century Group meetings because they now concentrated almost exclusively on Level 1 activities. Around this time, Ian finally gave up and left too. When the old Business Link/TEC structure finally ceased that Spring, so did what was left of the 21st Century Group.

For a while there was periodic talk of reviving the Group; but nothing came of it. Undoubtedly the 21st Century Group was highly valued by its Members – they wouldn’t have paid to be in it otherwise! – but did it make a real difference in terms of business performance? Here are brief accounts of a few of the Members and what they said about the Group…