The Year of Disruption

January-March: Ran Psychology Topics #1: Romantic Relationships, Mental Health evening classes at both Shipley College and Rossett. However, the courses were terminated prematurely at week 9 due to schools and colleges being closed in measures to limit the spread of the Coronavirus pandemic sweeping through the UK (and much of the rest of the world).
Commentary: Both programmes had been hugely successful, with classes large in size and gelling very well. There was a real sense of disappointment amongst participants – though everybody recognised the necessity of the closures.

In January I was observed for one of the sessions and again rated ‘Outstanding’ (or the equivalent of it under the updated policy). (Excerpts from the observer’s report are included in the Learner Perspectives pages.)
Gallery: Shipley College participants, March (All photos: Joan Russell/Shipley College ) – click on photo to enlarge.

March: Lost almost all of my Year 13 tuition students as the Government scrapped A-Levels this year and most of my Year 12s were reluctant to have tuition via Skype.
Commentary: The academic year had been pretty busy with tutees, right from September. The Government’s decision to scrap students having to sit A-Levels meant there was no need for them to continue to have tuition with me. The ‘social distancing’ required in response to the Coronavirus meant I had to move tuition from one-to-one to Skype. However, only one of my Year 12s was comfortable working online.

June: Ran a Zoom webinar Human Development & Spiral Dynamics, for the Advancing Education in Muslim Societies (AEMS) initiative of the International Institute of Islamic Thought (IIIT).
Commentary: In May I was approached by Ilham Nasser, head of AEMS, to run this webinar. AEMS had  used Spiral Dynamics as a modelling tool for their Mapping the Terrrain survey and report in 2019 and wanted an ‘expert’ to be able to explain the concept in some greater depth.

In all 43 people took part in the webinar. Feedback was very good but I found it hard work, talking to a blank screen – other than Ilham! In the last 15 minutes Ilham filtered participant’s questions in a Q&A session. 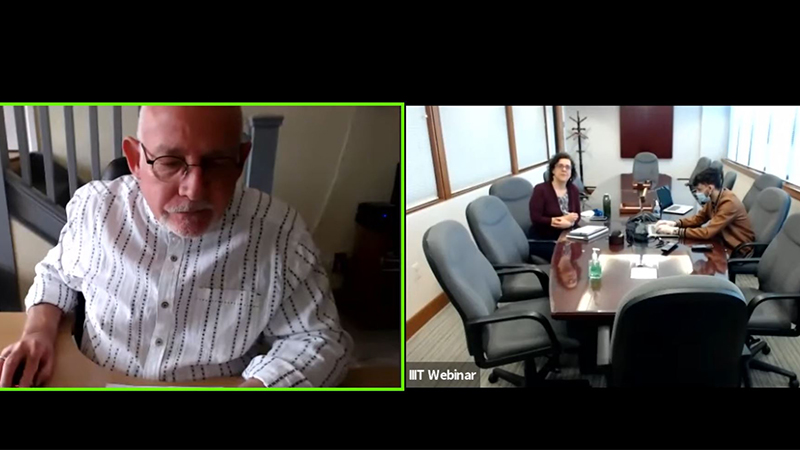 The presentation and part of the Q&A session are below.

The excerpt below is from Shipley College Star #50 which ran a short piece on the webinar. 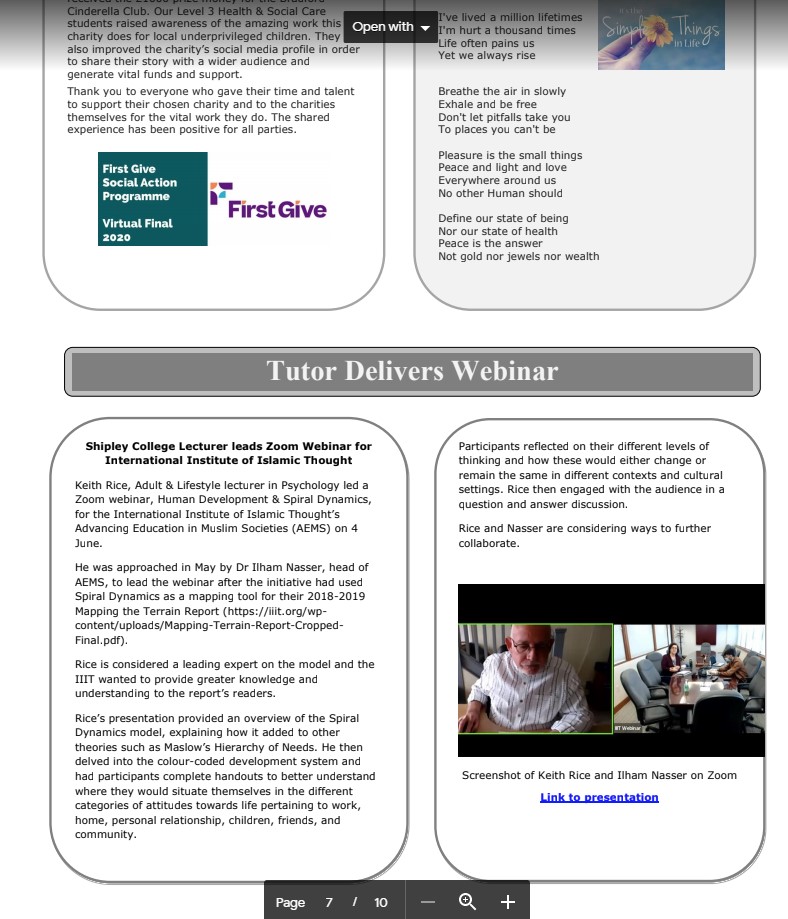 July-September: Provided tuition in the Graves Model via Zoom to Alan Ross, a Brit living in Brazil
Commentary: Alan approached me in the July to teach him via weekly sessions about Graves. A coach and an NLP Master Practioner, Alan was very clued up, self-reflecting and soaking up our sessions like a sponge. Inevitably we covered far more than just Graves – in reality pretty much everything within the scope of Integrated SocioPsychology.

August: In what turned out to be a very strange academic year indeed, I was pleased that my tutees scored mostly As or Bs with a couple of Cs.
Commentary: With the A-Level results being based on teacher estimates, 3 of the Bs felt they could have got As if they had actually been able to take the exam.  The parents of one of them asked me to write a report supporting their daughter’s appeal and I was happy to get involved me in reviewing her appeal documents. (The appeal gave her the A she deserved.)

September: Both Rossett and Shipley College asked me to run an online version of the now-annual Understanding Yourself & Others: an Introduction to Psychology course but neither attracted enough learners to be viable.
Commentary: In discussion with some longstanding learners who had attended my courses for several years, it became clear that it was not only the content of my courses but the manner of my delivery that kept them coming back for more – plus the social interaction I facilitated in the groups. For part-time evening class learners, the entertainment and social aspects of the courses were clearly important – and people doubted online delivery could provide a similar experience.

December: Became an advisory board member for the Potentialisation project.
Commentary: The project is the brainchild of Jon Twigge and it was he who asked me on to the board. I first met Jon at the Regent’s College Summit in 2009. We kept in fairly close contact for a few years and he allowed me to re-publish a few of the posts from his own Blog. We even wrote 2010 – Grim but not hopeless together.  As sometimes happens, we drifted apart during the following years. In 2015 he invited me to be part of a new meet-up group he was forming around the theme of ‘potential’ but I was too focused on other things at the time. Clearly the theme grew and broadened in Jon’s head until he left his job to start Potentialisation as a project.
Potentialisation is yet a hard concept to grasp in detail but the aim is to cover all aspects of well-being, learning and growth, with outreach to all aspects of human life, from the macro of being a think tank for political, social and economic policy to the micro of dating. While it might sound rather grand and amorphous, Jon has secured the backing of Sci-Tech Daresbury which has chosen Potentialisation as a 2021 member of Sci-Tech Daresbury’s Future Club. (Sci-Tech Daresbury is a national science & innovation campus – one of the UK government’s enterprise zones.)
One of Jon’s key partners in the project is Christopher ‘Cookie’ Cooke, with whom I ‘d worked on the HemsMESH project 20 years previous.