Training and the End of ‘Personal Therapy’

January-March: Ran Psychology Topics #7: Grandparents, Parents & Children evening classes at both Shipley College and Rossett.
Commentary: Both programmes were hugely successful, though, for various reasons, the Rossett class ended up smaller than it had started. Feedback was very positive and encouraging, with a couple of participants saying it had been a life-changing experience.
Gallery: Rossett participants, March – click on photo to enlarge.

May-July: Ran Psychology Topics #8: Politics, Conflict Management at Rossett.
Commentary: Back in Spring 2018, developing a course using Integrated SocioPsychology to examine the rapid changes Western politics were going through with Brexit and the rise of Donald Trump had seemed a good idea. While it was already clear that the Brexit process was turning into a dysfunctional mess, I don’t think anyone could have anticipated just how disastrous it would become through the first half of 2019. The course was supposed to run at Shipley College as well as Rossett but there simply weren’t enough participants for it to be financially viable there. I attributed this to ‘Brexit weariness’!

The fate of the Rossett course hung in the balance for a couple of weeks but some late signing-ons enabled it to run. Pleasingly, the group gelled incredibly well – especially considering there was just one Brexiteer in the class, with the rest being varying degrees of anti-Brexit! Feedback at the end of the course indicated all the participants had found it highly worthwhile.

June: Video of an interview I had done with René de Beer the previous month was broadcast to the first Integral African Conference. 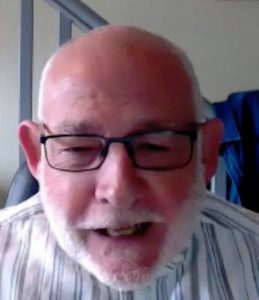 A still from my IAC video interview

Commentary: Back in December had been asked to speak at the conference by co-organiser Rica Vilajoen (who was a prime mover in 2018 Spiral Dynamics Summit on the Future, at which I had spoken). I turned Rica down as I felt I needed to stay at home to support my A-Level tutees in the middle of their exams. However, Rica is a great flatterer and eventually persuaded me to do a video interview which could be broadcast at the Conference.

The interview was far-ranging, going from my introduction to Spiral Dynamics back in 1998 to the development of Integrated SocioPsychology to applications of these concepts to major world crises.

August: With one exception, all the Year 13 Psychology tutees reported sccoring Bs while Sociology student Ellie Moody achieved an A.
Commentary: In a year considered pretty tough, with fewer As than usual, Ellie did incredibly well to score an A while the Psychology students all did well to gain Bs. All reported they were going to their university of choice.

September: At the beginning of the month announced that I would no longer be taking new counselling & therapy clients for what I called ‘Personal Therapy’ and would cease that service completely by the end of March 2020.
Commentary: The aim was to have completed all outstanding counselling & therapy work by that date at the latest.

Unlike my decision to no longer promote myself as a consultant in early 2017, there was no shortage of this kind of work. I was able to support as many clients as I wished; and 2019 was proving to be one of my busiest years. However, I felt I was going to need (very expensive!) refresher training sometime in the next few years; added to which Personal Therapy was not really profitable when set against the time and emotional resources required to support clients. (Exhausting!)

The decision was made with a ‘very heavy heart’. Not only had I found it very fulfilling to help people make significant changes in their lives; but, at the time of writing The Use of SDi in Psychotherapy in early 2015, I had been told that I was one of only 3 therapists in the world using the Gravesian approach. So not an easy decision to make…but, once made, I felt relieved that it was the right one for me and Caroline as a further step towards the target of becoming ‘semi-retired’. 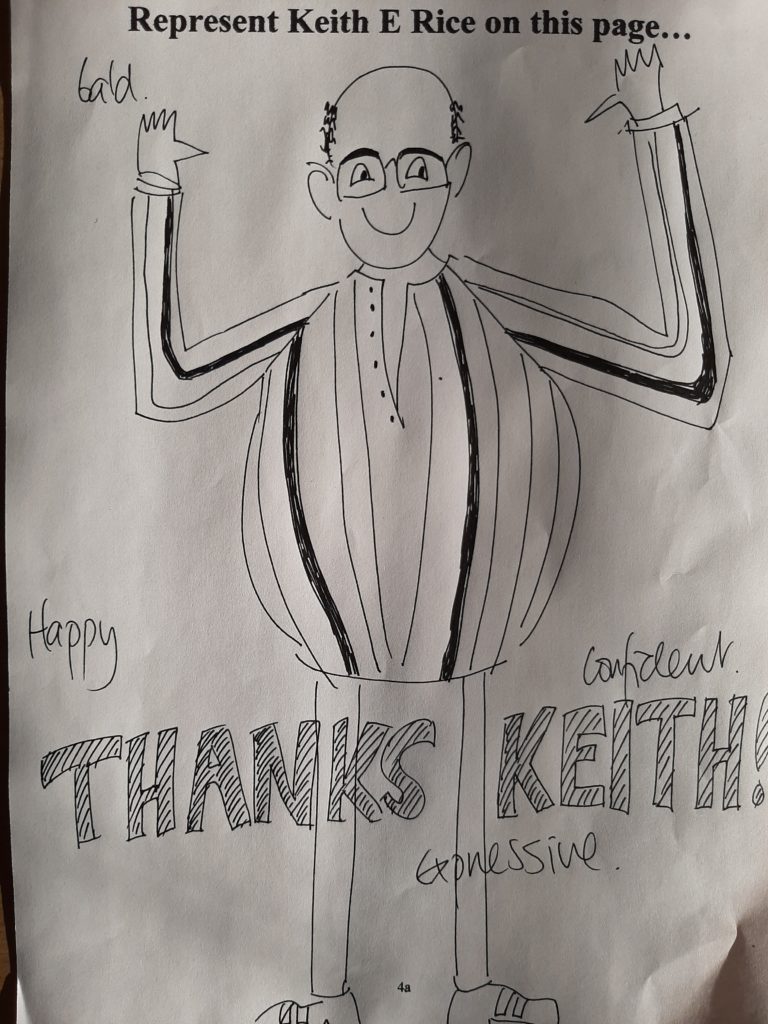 A fun representation of me turned into a ‘Thank You’ by Rosamund at the BBS workshop, Sept 20`19

September: Carried out the first of 2 days training for counsellors and advisers working for Bradford Bereavement Support – this one on Cognitive Development, with a particular emphasis on children.

September – November: Ran Understanding Yourself & Others: an Introduction to Psychology for Rossett.
Gallery: Rossett participants, November – click on photo to enlarge.

September – December: Ran Understanding Yourself & Others: an Introduction to Psychology for Shipley College.
Gallery: Shipley College participants, December – click on photo to enlarge.

October: Completed the second day of training for Bradford Bereavement Support – this one on motivational development and temperament.
Commentary: the BBS training was at the instigation of their chairman David Darby. David, a retired counsellor himself, had been on several of my Shipley College courses over the previous year or so and thought some of the material covered could provide excellent continuous professional development (CPD) for the charity’s counsellor and advisers. In recognition of the invaluable work BBS does, I gave my time pro bono (without charge).

The training went down so well I was asked if I would consider doing further training for them in the future.

November: Completed my last counselling & therapy session.
Commentary: The client had made remarkably good progress – so it was a real high note to go out on!

December:  Received a Christmas present of a ‘Pink Freud’ T-shirt from 2 of my tutees, Annie Brown and Liselle Naylor.
Commentary: It’s not been entirely unknown before for tutees to give me ‘thank you’ presents…but this was quite something else – representing my 2 passions in life: Psychology and music! What made the gift extra sweet was that the girls were both very, VERY promising students and they were also the best of friends. 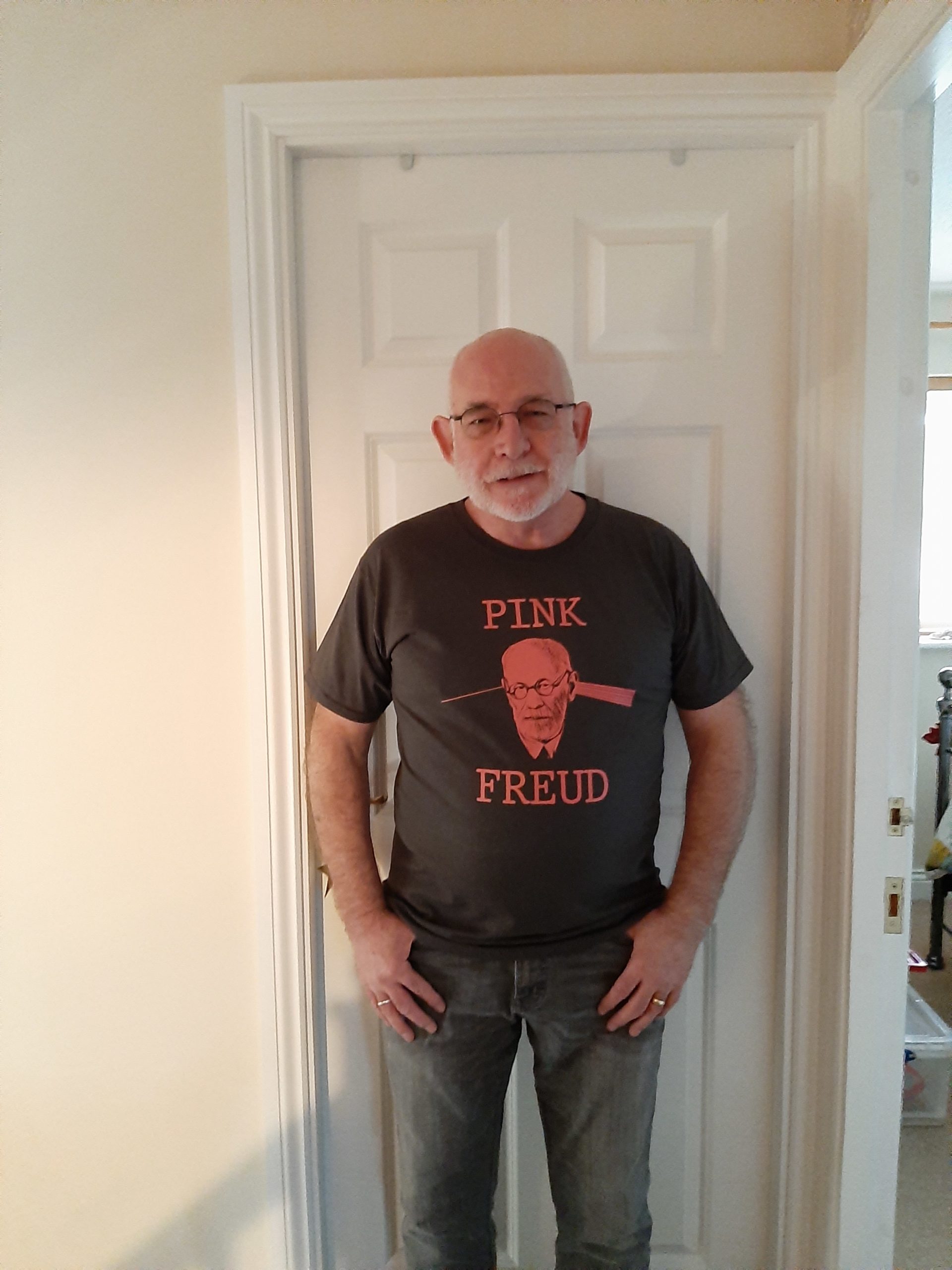