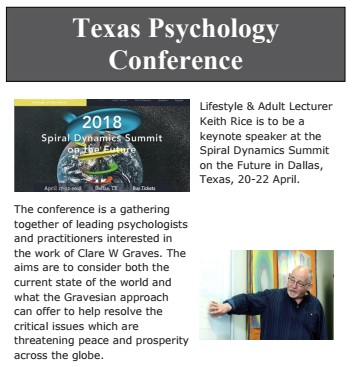 January: Invited by Said E Dawlabani to be a keynote speaker at the Spiral Dynamics Summit on the Future conference in Dallas, Texas 20-22 April.
Commentary: In format at least, this was to be modelled in part on Don Beck’s Annual Confab. (I had been to the first in 2000.) Said intended it to be both a tribute to Don’s legacy and a major gathering of Gravesians to consider the current state of the world and what the Graves approach could offer it. The excerpt left is from Shipley College Star #41 which ran a short piece on the invitation.

January-March: Ran Psychology Topics #5: Memory, Prejudice & Discrimination evening classes at both Shipley College and Rossett.
Commentary: Both were great classes that really gelled – though I managed to get the Rosset class into 2 quite hostile and competitive groups to demonstrate Social Identity Theory! That didn’t work quite as well at Shipley as one of the groups insisted on being inclusive towards the other. Big GREEN! But that led me to a greater personal appreciation of Theodore Adorno et al’s (1950) concept of Rigidly Unprejudiced – see Adorno’s types of prejudiced persons. As a result, I amended the following workshop for both classes and posed the question: Is it always wrong to discriminate? – using examples of female genital mutilation, persecution of homosexuals and child labour to stimulate huge amounts of discussion. It’s usually Adorno’s concept of the Authoritarian Personality that gets all the attention – so it was an important piece of personal development for me to look more closely at Rigidly Unprejudiced. 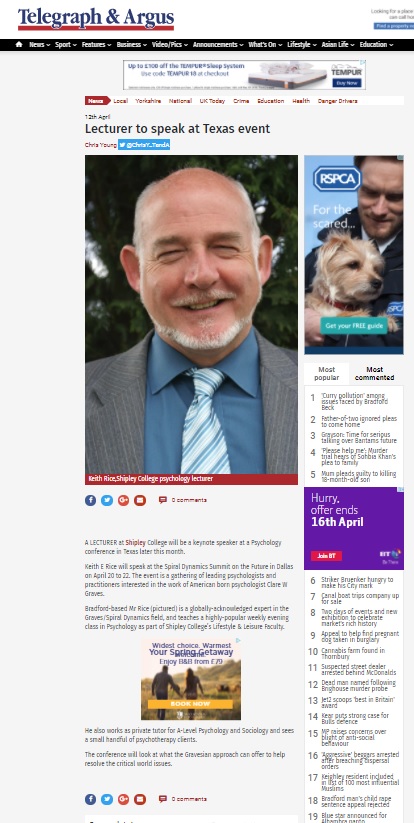 The big issue we tackled was understanding racism (a natural by-product of PURPLE discrimination against those not-of-our-tribe) and looked at ways to minimise racism. See: Is Racism Natural..? We proposed accepting that is the way the PURPLE vMEME thinks – rather than castigating that way of thinking, as GREEN all too often does – but then looking for common causes for the tribes (white, black, Asian, etc) to work together to achieve. Muzafer Sherif et al’s  (1961) Robber’s Cave study gave us a model for much of that .

Although Prejudice & Discrimination was the controversial ‘big hitter’ topic, I was pleasantly surprised in feedback how many people found the Memory section really practical and useful.

February-June: The numbers of tutees coming to me for help with their Psychology and Sociology A-Levels increased week by week until, by the end of May, I was as busy as ever.

April: the upcoming trip to Dallas for the Spiral Dynamics Summit on the Future picked up and featured in local Bradford newspaper Telegraph & Argus. (Screen capture from the online version of the paper.)

April: Attended the Spiral Dynamics Summit on the Future conference  and gave my presentation Increasing Credibility & Acceptance of Graves/Spiral Dynamics in the 1st Tier World on the Friday afternoon. Was filmed in interview with noted documentary maker John Kiehl on the Sunday morning.
Commentary: Don Beck told me he considered my presentation “outstanding”…which meant a great deal to me.

In fact, Don seemed highly impressed with the weekend as a whole, saying how confident he felt that the future of Graves/Spiral Dynamics was in good hands.

The list of speakers for the weekend as a whole  was impressive, with Fred Krawchuk, the colonel who masterminded tribal diplomacy in Iraq, Bjarni Snæbjörn Jónsson, who was involved in developing the new Icelandic constitution, and Lawrence Bloom, Secretary General of the Be Earth Foundation and  first Chairman of the World Economic Forum at Davos, perhaps the biggest names. Teddy Larsen, Robin Lincoln Wood, and Nicholas Beecroft were among other speakers who particularly impressed me. So did Rica Viljoen who co-hosted with chief organiser Said E Dawlabani. Thomas Johns did a great job of a last-minute stand-in in for the ill Serge Solonin, with a totally different presentation!

It was real pleasure for me to hook up again with my former Centre of Human Emergence UK colleague Jon Freeman. It was also wonderful to meet people in the flesh who, hitherto, had just been names in the ether – like Barbara N Brown, Bonnie Valette, Bill Hajdu, Jim Lockard, Ben Levi, etc, etc – and, of course, to make many new contacts such as Robert Belew, filmmaker Tom Feldman, Anne-Marie Voorhoeve and Karen L Carnahan.

The Saturday night saw a dinner to honour Don with many stories and anecdotes  remembered (including mine about Don’s ridiculous ‘truth meter’ at a HemsMESH Open Forum).
Gallery: a selection of snaps from the Summit – click on photo to enlarge.

April- July: Ran Psychology Topics #6: Biological Psychology, Consumeriism & Shopping evening classes at Rossett.
Commentary: The class was rather small and, for various reasons (illness, holidays), attendance was patchy at times. However, feedback on the course was completely positive.

June: Shipley College Star #43 carried a follow-up piece on my presentation at Dallas.

August:  A rather pleasing set of results for my A-Level tutees, ranging from A* to C.
Commentary: The 2017-2018 students were a particularly hard-working and bunch committed to their own success. Danya Al-Afandi and Ifrah Zaman were just 2 who recovered from poor mock results earlier in the year to achieve Bs. Arguably the star of the show was Rachel Hanson who obtained an A* in Sociology and an A in Psychology. In all fairness to Rachel, she came to me fairly late in the year and it was more a case of filling in some gaps and refining some points than any major intervention on my part.

August: Delighted that my letter on Self-Actualisation and Blackfoot First Nation influences on Abraham Maslow was published under the title of More on Maslow in both the online and print editions of The Psychologist (the monthly journal of the British Psychological Society).

The letter included a reference to the work of Clare W Graves as well as that of Jane Loevinger.

August:  A 2nd Tier Approach to a 1st Tier World published in the Integral Leadership Review special edition Closing the Momentous Gap with a Momentous Leap
Commentary: I was thrilled to be asked by guest editor Robin Lincoln Wood to contribute to the ILR special edition inspired by the Spiral Dynamics Summit on the Future. My article essentially expanded on my Summit presentation but also focused on developing Don Beck’s concept of ‘brain syndicates’.

September-December: Ran Understanding Yourself & Others: an Introduction to Psychology for both Shipley College and Rossett.
Commentary: Both groups, pleasingly, were on the large side but bonded well and seemed enthusiastic about the material. For a variety of reasons, there were several absences in both groups for the final session, based around reviewing the course and using the material to examine a case study.

1 year after my last observation – in accordance with Shipley College’s updated policy – I was observed for the last session there and again rated ‘Outstanding’ (or the equivalent of it under the updated policy). (Excerpts from the observer’s report are included in the Learner Perspectives pages.)
Gallery: Shipley College participants, December – click on photo to enlarge.

December: Invited by Rica Viljoen to speak at the first Integral African Conference, to be held in Johannesburg 5-7 June 2019. Unfortunately had to decline the invitation due to other commitments.
Commentary: For several years I had followed Rica’s work and been much impressed. It had been a real thrill for me to meet her in Dallas back in April. However, 5-7 June is right about the beginning of the A-Levels and I don’t feel I could let my tutees down at such a critical time.