January-June: After a very slow start to the academic year in Autumn 2015, my tutoring work picked up rapidly at the start of the year and kept me fairly busy right through to late June.
Commentary: While the tutoring never quite reached the frenetic levels of the previous year, it was hard work because I was teaching the old A-Level specifications to Year 13 A2 candidates and AS resitters while learning the new specifications to teach Year 12s. Whilst I had tutored in all the old specifications, I took the decision just to tutor the new AQA and Edexcel specs in Psychology and the new AQA Sociology spec going forward.

February: Invited by Marc Lucas of the University of Cologne Psychology Department to be part of a documentary offering a Gravesian  perspective on the migrant crisis afflicting much of Europe. Tentatively titled ‘Integration and Emergence/y – Europe and Germany between transformation and crisis’. The documentary was to be funded via the university and directed by award-winning documentary maker Hans Hausmann.
Commentary: I was due to fly to The Hague to be interviewed by Lucas and Hausmann at the end of May. However, problems with the venue meant the filming had to be rescheduled to a time/date I couldn’t attend.

March: Noted Psychology textbook author Christine Brain used one of my pages from Biological Factors in Crime as a further reading exercise in her new Edexcel A-Level textbook – see below.  Although I knew about the Philip Allan Updates magazine Psychology Review referencing a couple of my pages in one issue, this was the most high profile mention of my work in a mainstream academic textbook that I was so far aware of.
Commentary: One of my key intentions in first starting to develop Integrated SocioPsychology back in 2004 was to raise awareness of the Gravesian approach amongst academics. By linking the work of Clare W Graves to much better known researchers and theories such as Hans J Eysenck’s Dimensions of Temperament and Lawrence Kohlberg’s Stages of Moral Development, my hope was that students searching for such information would come to my site and follow the links to pages on Graves. Brain’s reference to my work was, thus, important. (4 of my web pages were also listed as ‘free resources’ on the AQA Psychology site.) 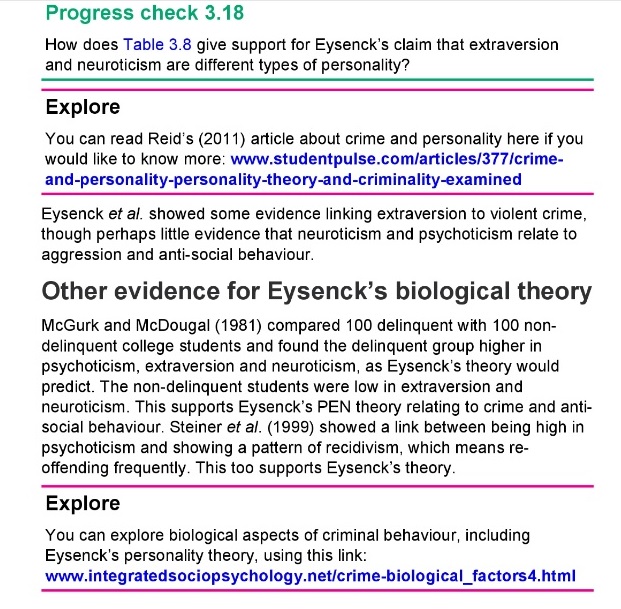 March-April: Carried out counselling & therapy with a young woman diagnosed with Obsessive-Compulsive Disorder and together we succeeded in reducing her anxiety levels considerably and enabling her to feel much more confident.
Commentary: I had never handled a case of OCD before and warned the client that I did not profess great expertise in that condition. However, the client wanted me in particular to work with her. We found that the anxiety was rooted in childhood experiences and thus I was able to use tools I am expert in to help make a significant difference to this person.

April-June: Ran the full 10-week Understanding Yourself & Others: an Introduction to Psychology for Rossett.
Gallery: Rossett participants, June – click on photo to enlarge.

August: With one exception, all my A-Level tutees met or exceeded target, with a high number of As and Bs.
Commentary: A couple of the tutees showed incredible resilience in the results they achieved. Sophie Hastings overcame a couple of bouts of debilitating illness to go from being a D last year to achieving a B this year. Iranian-born Faranak (Faz) Shaghouei recovered from a disastrous Year 13 full of emotional trauma to study independently. She achieved A in both Sociology and Psychology and is off to study Psychology at University College London.

September – November: Ran an 8-week version of Understanding Yourself & Others: an Introduction to Psychology at Rossett for 4 participants.

September – December: Ran the full 10-week version of Understanding Yourself & Others: an Introduction to Psychology for Shipley College.
Commentary: If the Autumn Rossett course had a bare minimum of participants, the concurrent Shipley course was the most well-attended ‘night class’ course I had yet facilitated, with 18 participants.
Gallery: Shipley College participants, December – click on photo to enlarge.

September-December: Had the busiest start to an academic year for my tutorial services since I began private tuition way back in 2007. By Christmas I had as many tutees on my books as I had had in the run-up to the exams in May-June.
Commentary: the new A-Level specifications (introduced in September 2015) were meant to be much tougher than the previous ones – and they certainly were! I think just how tough had caught a number of teachers out, with many students achieving well below their predicted AS grades. All but one of the tutees who came on board in the Autumn had performed below expectation at AS. The one who didn’t was Alex Spencer, a young man who came to me, my only AS student of 2015-2016. He achieved a grade higher than predicted – well done, Alex!