January-April: Supported 2 individual therapy clients for what turned out to be a prolonged series of sessions for both of them, requiring an almost Psychoanalytic approach to explore deep historical issues.
Commentary: One of the clients was based in another country, requiring us to use Skype. Also, English was not the first language of this client. What we were able to accomplish in those sessions far exceeded my expectations – though the client’s willingness to try techniques and her determination to progress her issues were critical factors in the success of the sessions.

March: The Woodhouse Grove results from the Psychology A-Level exams in January showed a solid improvement over the previous January, with almost no Us and a couple of pretty good As. This time around it was the Rossett Psychology results which were mixed. Amongst the small handful of Sociology students at Rossett, one got an A and 2 Bs. In the even smaller Health & Social Care group, one student predicted a D scored a good B. The small handful of private tutees I had facilitated included 2 As.

March-June: Phenomenally busy supporting private tutees. By May I was supporting 8 private tutees – in addition to putting on additional revision sessions at the 2 schools! – and had turned down as many would-be tutees as I accepted.
Commentary: When we moved to Apperley Bridge (north-east Bradford and bordering north-west Leeds) the previous Summer, partly to be nearer Woodhouse Grove, I was anticipating an increase in the number of tutees requiring support…and my expectations were certainly fulfilled!

April: Accepted into the British Sociological Association with the grade of Standard Member.

June: Finally left Rossett, following a restructure which reduced the number of part-timers.
Commentary: I was sorry to leave Rossett. I thought it was a good school going places, a goodly number of the 6th Formers were committed to their own success and I was proud to have been part of a successful drive to raise levels of attainment. I had particularly enjoyed working with Psychology coordinator (and good friend) Ali Standen and my Sociology co-teacher Sula Cameron-Bhandal.- while the last lot of Psychology Year 12s I taught there was one of the most fun classes I ever had!

Ali ran the collection for my leaving present: a pair of Freudian Slippers – Freudian Slippers, geddit? Very apt, considering my great respect for many of Freud’s concepts…and also very comic, as the photos below show!
Gallery: Ali’s Freudian slippers, with even Basmati the cat taking a liking to them! – all photos by Caroline Rice – click on photo to enlarge.

July: Relaunched Telephone Support page as Online Counselling.
Commentary: There had been no real take-up for the option of ‘Telephone Support’, which I had always seen as having extremely-limited potential to help clients. However, a couple of highly-successful therapeutic interventions using Skype had convinced me that the video-link medium had real potential.

In both cases I was initially reluctant to use a video link but had been effectively nagged into using it by the would-be clients. Sufficient progress was made to convince me that worthwhile work could be done via the medium. It was still nothing like as powerful as being in the same room as the client – in-person therapy…but, for a client in distress and otherwise unable to access help, it was clearly a substantial move forward.

August: No overall As in the Woodhouse Grove A-Level results this Summer but a healthy smattering of Bs and every student bar one meeting target. The Rossett results were a little more mixed – though there was an A amongst the Psychology students. Apart from a couple of them who knew they had screwed up one of their exams, all of my private tutees met their targets.
Commentary: This year the Department of Education were briefing much more explicitly than last year that there was a deliberate pressure on exam boards to deflate A-Level results. While there may have been a strong case that there had been ‘creeping grade inflation’ for many years, the abrupt deflation of the previous 2 years clearly disadvantaged current students and createds undue pressures on schools desperate to maintain their standing in the infamous ‘league tables’.

September- December: Ran Psychology Topics #3 : Crime, Depression for Rossett’s Extended Schools Programme, with a mix of newcomers and ‘old timers’ joining the 10 Wednesday evening sessions.
Commentary:  As with previous courses, the class gelled well and really seemed to get a lot out of the material. The success of the course was perhaps best epitomised by Extended Schools coordinator Malcolm Howe in an e-mail after the final session: “I was leaving the same time as your students and they were saying how marvellous you were as a teacher.” How gratifying!

It was, of course, a pleasure to maintain this contact with Rossett.
Gallery: A few shots from Psychology Topics #3: Crime, Depression, December 2013 – click on photo to enlarge.

September: “More of the same, please!” was the concluding remark of Woodhouse Grove head master David Humphreys at our annual departmental review.
Commentary: For the first time since being launched as an A-Level 3 years before my arrival, the Psychology department overall had met its minimum value targets.

In 2 years I had substantially increased the performance of the department. Some credit, though, has to go Donna Shoesmith-Evans, the demanding but highly-supportive head of faculty. Donna never let up pressurising department heads to improve results. That you were then required to put in hours way beyond what the unions would have considered acceptable was inconsequential to her. But Donna fought the proverbial ‘tooth-and-nail’ battles to get her teachers the support and resources they needed to get the results she wanted.

October-December: Took on a record number of private tutees. By December I was supporting 10 A-Level Psychology students, one Sociology and one university access course student and turning away new enquiries.
Commentary: The ending of my teaching commitment at Rossett left me with more time to take on more tutees. Moving back to Bradford (after 12 years away!) from Harrogate also gave me a much greater potential clientbase to draw upon. 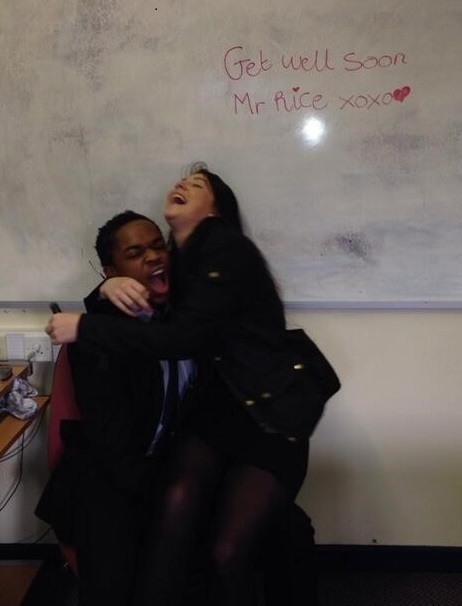 December: Took on my first ‘Skype tutee’ – as per Online Tuition.

December: Admitted early morning to hospital with chest pains – though discharged late that evening. The working hypothesis was that I hadn’t had a heart attack but the chest pains were brought on by a combination of  acute stress and atherosclerosis. I returned to work in just over a week
Commentary: A small handful of abnormally-difficult Year 12 students had proved so challenging that my mildly-psychoticist temperament had triggered in me an acute ‘Type A’ stress reaction.

While I was off, several of my students had sent me, via Twitter, the photo message left. In gratitude, I put the photo on my Twitter and Facebook accounts with the following caption:-
“Not all students are pains! Several of my Woodhouse Grove psychology students sent me this. How thoughtful and caring.”

The school, to their credit, rapidly put in strategies to help manage the disruptive students.