January-March: Delivered Psychology Topics – Prejudice & Obedience, Romantic Relationships and  Mental Health for Rossett’s Extended Schools Adult Education Programme.
Commentary: For several months Extended Schools coordinator Malcolm Howe and I had been kicking around the idea of an ‘intermediate’ course for ‘graduates’ of the ‘Understanding Yourself & Others – an Introduction to Psychology’ course to further their leaning. When ‘Psychology Topics’ was finally staged, we were amazed at the number of participants who enrolled – having to cap enrolment at 16 for logistical reasons. About half came from the previous ‘Introduction…’ courses but just as many were totally new to my training. Malcolm had asked me to design the course so it wasn’t completely essential to have been on the ‘Introduction…’ course (though, clearly, it would help!) and I paired ‘newbies’ with ‘oldies’ when drawing upon concepts from the earlier programme. While there was a little drop out and not everyone could make every session, the group gelled incredibly well and several friendships appeared to form.

The content was geared to the 3 topic areas, though regular reference was made to the Gravesian approach, Hierarchy of Needs, Schemas & Memes and Dimensions of Temperament amongst the psychological concepts discussed.

Feedback on the course was overwhelmingly positive, with requests for a ‘Psychology Topics 2’ and discussion of setting up a network group, possibly along the lines of the Humberside MESH Network.

February: A therapy client I had worked with 3 years back returned to me to help with a different issue.

March: Results from the January exams were exceptional for my private tutees – all As and Bs, with one A at 90%! The Sociology results at Rossett were also impressive, including a couple of As and all students either meeting or exceeding target – 3 of them significantly. The Psychology results at both Rossett and Woodhouse Grove were rather more mixed, though they still included a smattering of As and Bs.
Commentary: In the past year I’ve worked with some incredibly talented and committed young people and it was fantastic to see them get the rewards they so richly deserved.

March:  A tutee I had worked with 4 years back came to me to help her put together her undergraduate final year dissertation.
Commentary: It was lovely to see this young lady again and to see how much she had matured.

Thus, I was especially delighted when she let me know in July that she had achieved a 1st – to which, in part at least, she credited the work we had done together on her dissertation.

April-May: Delivered Psychology – What is It? for Rossett’s Extended Schools Programme. This was a cut-down version of Understanding Yourself & Others: an Introduction to Psychology.
Commentary: In spite of having only 7 weeks (rather than the usual 10) for this ‘night school’ course, it went incredibly well. One participant called it “a life-changing experience” and indeed seem to gain a considerable boost in both confidence and self-esteem. Again the group gelled incredibly well. 2 of the participants had been ‘newbies’ on the Topics and came onto this ‘Intro’ course to get a more-enhanced understanding of the basics.
Gallery: Psychology- What is It?  participants, May 2012 – click on photo to enlarge. 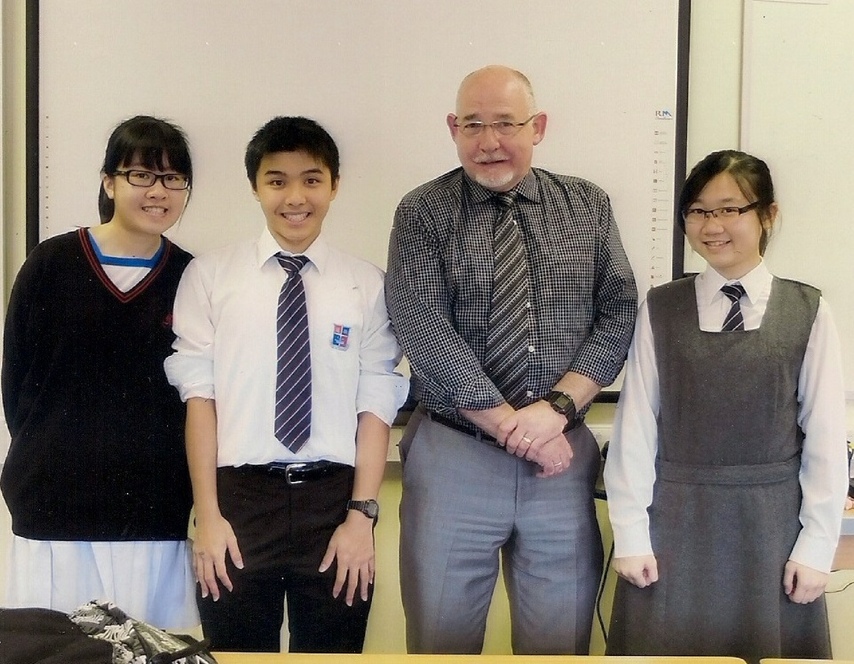 With Carrie, Lawrence and Heidi, June 2012 – 3 exchange students on a visit to Woodhouse Grove, from Kowloon Methodist College in Hong Kong. (Photo courtesy of Lawrence)

July: Delivered the short-day workshop Psychology for Grandparents for Rossett’s Extended Schools Programme. This used the Gravesian approach to explain how people have different values in different contexts and then Lawrence Kohlberg’s Stages of Moral Development and Erik Erikson’s Psychosocial Development to show how the emergence of vMEMES progresses the development of children.
Commentary: Although only 5 participants turned up, the workshop was a fantastic success, with the 5 gelling considerably and all of them expressing interest in undertaking further courses in Integrated SocioPsychology.

August: In spite of OFQAL having forced tighter marking criteria on the exam boards, the Psychology A-Level results at Rossett were very pleasing, with one good A and a good number of Bs. The Sociology class was of a wider ability range but all the students at least met target and one student achieved a well-deserved A*. Results at Woodhouse Grove were more mixed but showing a steady improvement from 2011, with several students exceeding target (including a 93% AS module!). Amongst my reduced number of private tutees, there was one A and one A*.
Commentary: While I was pleased for every student of mine – state, independent or tutee – who did well, I was particularly delighted for the private tutee who achieved A*. She was arguably the brightest tutee I had yet worked with and unquestionably extraordinarily hard-working…but she suffered from a serious and debilitating chronic illness which had periodic, life-threatening acute flare-ups that literally hospitalised her for weeks on end. That she could overcome this adversity to achieve such a spectacular result was mindblowing and shows just what can be done when such a powerful RED/ORANGE vMEME harmonic is creating and driving such powerful ‘can do’ schemas in the selfplex. It also has to be noted that the PURPLE-driven support of her parents was self-sacrificial to the point of serious loss to their own welfare.
(Sadly this inspirational young lady was to die from her illness in the December.)

September: Committed to another year teaching Psychology, Sociology and Health & Social Care one day a week at Rossett.

September- December: Ran 2 courses on consecutive nights for Rossett’s Extended Schools Programme. Tuesday nights saw another repeat of the introductory course – now retitled: Psychology: an Introduction – Understanding Yourself & Others – while Wednesdays saw the launch of Psychology Topics #2 – Memory, Stress, Change.
Commentary:  Although, for various reasons, there was a higher than usual dropout on the courses, both groups of ‘survivors’ were effusive in their praise – and demanded more! Which made a ‘Psychology Topics #3’ for 2013 a virtual certainty.

December: Steve Paul, a distinguished local psychotherapist and father of one of my AS students, Rosie Paul, came into Woodhouse Grove to give a presentation on different approaches to Schizophrenia. (Steve, until his recent semi-retirement, had been Head of Department for Psychological Therapies at Leeds Metropolitan University.)