January-March: Delivered Understanding Yourself & Others – an Introduction to Psychology  for Rossett’s Extended Schools Adult Education Programme.
Commentary: While, obviously, I had a long track record of delivering successful workshop programmes for adults, this was my first ‘night school’ course. The initial momentum for such a course and the design of the course had come from one-time Guiseley Psychology teacher Marc Smith. However, Marc had moved on and Rossett’s Extended Schools coordinator Malcolm Howe asked me to take it over.

To some extent, I was lucky. Firstly, Malcolm gave me pretty much a free hand to alter Marc’s course to suit my own preferences…so I was able to include sessions on the Gravesian approach and Hans J Eysenck’s Dimensions of Temperament which enabled me to be truly passionate about the material. Secondly, by using an NLP-based approach to getting the workshop participants engaged both with the material and with each other, those on on the course gelled incredibly well and the sessions quickly became a highly-enjoyable learning experience for all of us.

I had learned these techniques in my NLP training with Hidden Resources back in 1998-2000 and had especially noted the way John Lavan worked the participants in a room, facilitating them in developing a sense of community amongst themselves. I had refined these techniques for myself in the various workshop programmes I presented under my own name 2001-2007 and, of course, the 21st Century Group and the Humberside MESH Network. Now, with that extra bit of experience and maturity, I was able to facilitate the class into not only understanding and being able to apply the material but also into developing highly-supportive relationships amongst themselves.

The success of these workshop management strategies was reflected both in the number of ‘returners’ who came on future courses but also the number of out-of-class friendships which had their beginnings in the workshops.

By the end of February Malcolm was receiving such positive feedback from the course that he asked me to repeat it in the Spring term and to start thinking about putting on an intermediate version in the Autumn.

February: Began an open-ended part-time commitment to assist with the teaching of Psychology at Woodhouse Grove School  in Apperley Bridge, on the outskirts of Bradford.
Commentary: With their Psychology teacher having left through illness, the school needed some heavyweight assistance in the Psychology department, my name was put forward through one of my tutees who was a student at ‘The Grove’…and one thing led to another…!

Over the past year or so and with my reputation as a private tutor starting to spread, I had started to pick up tutees from independent schools, including over time a sizeable handful from the prestigious Leeds Grammar School. That parents were having to pay twice privately in some respects for their teenager’s education – once with the school and once with me – led me to question whether the standard of teaching was, in fact, better in independent schools than in state schools. From looking at my tutees’ notes and teacher-provided handouts, on occasions it clearly wasn’t! Of course, it has been long understood that those going to independent schools are much more likely to progress to university. (Eg: in 2014 BBC News’ Pippa Stephens reported that just 11% of state school students in 2010 went on to the select Russell Group of universities compared with 38% of independent school students.) A second key benefit of teenagers going to an independent school is that they are more likely to have the opportunity to enter the ‘old boys network’. With the top professions dominated by independent schools pupils even being acknowledged by education secretary Michael Gove (according to the Daily Telegraph’s Graeme Paton in 2011), clearly who you know is still an important factor in top career progress.

For all the social, political and ethical issues to do with independent schools, I have to say that in many ways I was very taken with Woodhouse Grove. It was my first experience of teaching in an independent church school and I was mightily impressed with the more holistic approach the school took to the students’ education. However, I soon found out that some of the students were just as problematic as those in state schools!

With a full load of tutees, though, the commitment to The Grove stretched me to my limits and, for the first time, I was obliged to turn down requests for tuition.

March: The Rossett results from the January exams were still a little mixed but undoubtedly a substantial improvement on the year before. Several private tutees achieved As and Bs.
Commentary: Especially satisfying for me were the GCSE Sociology results which showed all the students bar a couple on target and a couple beating them – including one A*! 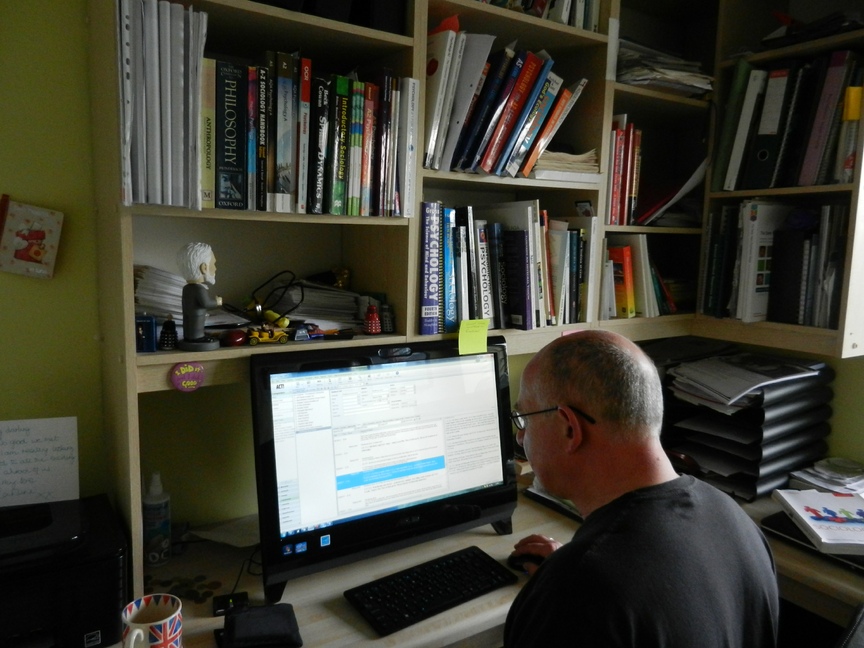 Working in my office in Harrogate, April 2011 (Photo: Caroline Rice)

April-June: Delivered the second course of Understanding Yourself & Others – an Introduction to Psychology at  Rossett.
Commentary: Again the course went very well and Malcolm booked another one for the Autumn.

August: The A-Level results at Rossett were substantially improved over this time last year, including the Psychology Department’s first A*. Results at Woodhouse Grove were a little more mixed – but that reflected a transitional situation. Amongst my private tutees, results were pretty much on target with one tutee achieving a very praiseworthy 91%!

September: Became 3-days-a-week Head of Psychology at Woodhouse Grove. I had resigned from Rossett to undertake this role but headteacher Pat Hunter asked me to still do one day a week teaching Psychology, Sociology and Health & Social Care – all at A-Level
Commentary: I was ready for more new challenges, Woodhouse Grove liked what I had done there on supply, so…. Much as I was excited by the opportunities at Woodhouse Grove, I was also delighted to still able to teach one day a week at Rossett, a school I had a great affection for and where I had a great working relationship with Psychology coordinator Ali Standen.

September-December: Delivered the third course of Understanding Yourself & Others – an Introduction to Psychology at Rossett.

October-December: Took on only a small handful of tutees, to ensure I could cope with the workload, being both a head of a department undergoing substantial restructuring at Woodhouse Grove and keeping up my standard of performance at Rossett.
Commentary: To my delight, one of the tutees I was able to facilitate was the young lady who had scored 91% in the Summer. Now, in her first year studying Psychology at university, she wanted some support on several aspects of her course.