January: Carried out major piece of therapy, using Penny Parks’ Mistaken Belief Visualisation (1994) to facilitate the healthy development of vMEMES.
Commentary: The story of Susan’ is told in the Services Case Studies section.

January: Returned to teaching part-time (as supply) – encouraged by teachers from St Mary’s College who felt it was important I had front-line classroom experience if I was to introduce the Gravesian approach and related Change Management methodologies into local Education.
Commentary: I had quit teaching 22 years previously and never thought I would go back to it. However, with business not exactly flooding in and wanting to further my understanding of the Gravesian approach as applied in the classroom, it seemed like a good option…for the short term! (From the research angle, the result was A Downward Spiral… in the Education pages.)

January-February: Facilitated strategic planning sessions with the Garths Board of Directors. Consequently asked to become a Director myself; agreed to become an ‘Expert Advisor’ to the Board on a voluntary basis.
Commentary: I turned down directorship on the grounds of potential conflict of interest. (I wanted to sell my services to the Garths!) I resigned the Expert Advisor position in Autumn 2002, partly due to other commitments and partly in frustration at the way politicking by certain Board members was getting in the way of developing vision and strategy.

In truth the Garths had a near-impossible mission. Their brief was to promote responsible citizenship (BLUE) and the desire to better oneself in the longer term (ORANGE) – primarily through a job shop and training-for-work schemes. With a local culture largely in the PURPLE/RED zones, it is small wonder that the Garths failed to meet several key targets attached to the original funding. Thus, they were unable to secure sufficient new funding and the company running the centre went into liquidation in mid-2003.

This should not in any way detract from the remarkable commitment and dedication of certain Board members such as Terry Stephenson and Stephen Prior.

In retrospect the Garths was a perfect example of an expensive government-funded project designed by people with different values to the people the intervention was aimed at. Running the False Consensus Effect, the project designers assumed the people in that part of Bransholme would share their values of enhancing employability and developing entrepreneurship – values related to BLUE and ORANGE. A very large number didn’t. As one local resident told me: “It’s all about power ’round here. Who controls the drugs, the girls and so on.” In other words, RED!

February: Started ISO 9001 project with ICW (UK) Ltd, helmed by Margaret Wood, former leading light of the 21st Century Group.
Commentary: Margaret Wood, a future MBE and Yorkshire Business Ambassador, was a most remarkable woman. Widowed in her late Forties, she bought out her husband’s former co-owner and ran ICW herself – increasing exports significantly in 1998 when most manufacturing companies were complaining the strength of sterling was preventing them exporting!

She took her learning from the 21st Century Group and applied it first to herself, then to her company. However, while commercial considerations might have pushed Margaret down the ISO 9000 route, the Self-Referenced and Options meta-programmes her RED ran didn’t fit with it at all! So we had some ‘interesting’ discussions about senior management needing to conform to the quality system to set an example to the workforce.

February-March: First open workshop programme under my own name, An Introduction to Spiral Dynamics & Related Models of Neuro-Linguistic Programming, at St Mary’s.
Commentary: Angela Ogilvie and a couple of other teachers from the school wanted to learn more about the Gravesian approach and NLP, so we put on a programme of 5 x 1/2-day sessions and opened it up to outsiders to make it economically viable.
Gallery: St Mary’s  Introduction participants, March – click on photo to enlarge.

April: Following meeting with Jennifer Crossland, Manager of the Grimsby Europarc Innovation Centre, established the Humberside MeshWORK web site – to promote the introduction of the Gravesian approach and related Change Management methodologies into the Humber sub-region.
Commentary: From my own observations – particularly my experiences in local schools – and discussions with people like teacher Jennie Beasty, Angela Ogilvie and the Garths’ Mary McGarry, I perceived many similarities between the urban parts of Humberside and the former coalfields of South-East Wakefield – the focus of HemsMESH. Only the ‘disappeared industry’ this time was fishing.

Inspired by Jennifer’s enthusiasm for applying the Gravesian approach to regeneration issues, I began to perceive how a MeshWORK approach could make a difference…how the social and economic regeneration of the Humber sub-region could be made faster, more inclusive and that much more effective through the use of SD and related psychological technologies’.

In July 2002 I renamed Humberside MeshWORK ‘Humber MeshWORKS’ at the suggestion of former Common Purpose in Hull director David Burnby. He convinced me that the ‘tribes of the Humber’ were far too disparate for a single MeshWORK ever to be conceived and that it would be better to concentrate on smaller localised MeshWORK projects.

April: Don Beck used some of my materials in his keynote speech to the World Education Fellowship Conference in Sun City, South Africa.

June: How the Brain develops the Mind published on the Humberside Partnership Connexions website.
Commentary: As part of  the Humberside MESHWORK project, I was seeking to influence local authority education policies and was invited to submit a piece to the new Connexions web site.

To my delight Chris Cowan agreed to review the draft article and made some suggestions as to how to improve it.

July: Establishment of Humberside MESH Network, formed of ‘graduates’ from the 2 St Mary’s programmes.
Commentary: The MESH Network was created as a response to questions like, “What next?”, “How can I learn to use this more?”, “How do I find out more about these concepts?” “We gelled so well together, during the course and it will help us to stay in contact…what’s the best way of doing that?”

Though I had no idea at the time, the MESH Network – like the 21st Century Group before it – would eventually develop its own organic momentum. 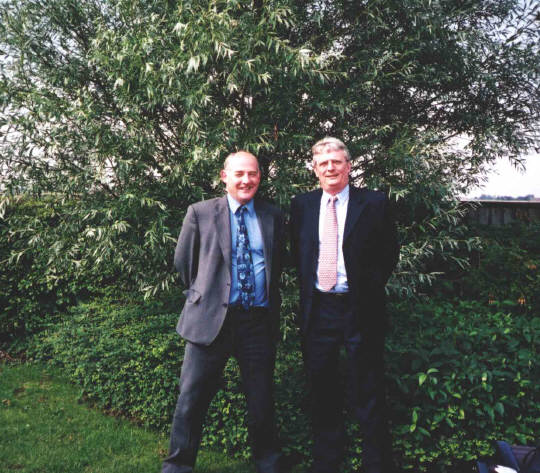 August: Now relocated in Hull, became Humberside representative for Cobus Business Services Ltd, run by former Business Link Wakefield chief advisor Steven Beevers.
Commentary: Steve and I found ourselves both working in ICW at the same time – he on Marketing and I on Quality. We had made quite an effective team at Business Link, especially with regard to the early days of the 21st Century Group – and also the Wakefield Manufacturing Partnership and the beginnings of HemsMESH. So, when he asked me to carry out projects under the Cobus banner, it was a real privilege to hook up with him again.

August: Began open-ended relationship with Beverley-based Hodgson Sealants Ltd – yet another referral from Stelram Engineering – to assist with redesigning the company using the Gravesian approach and Adizes Lifecycle.
Commentary: Hodgsons would prove to be one of the most satisfying in-house jobs to date. The Senior Management Team – especially Bernard McGuinn and Adrian Hartley – truly grasped the potential of the material to enable them to make a real difference to their company.

Click here to view the case study of my work with Hodgsons.

In 2002 Hodgsons won the Hull Daily Mail Business of the Year Award.

Aug: Started ISO 9001 project with QSI Group Ltd at their Grimsby and Teeside offices.
Commentary: The QSI project was the way I liked to do quality consultancy. Although I supplied some template materials, Engineering Director Steve Watson took complete responsibility for developing their system, using me as a teacher/reference and a check on his work. Consequently QSI, owned their quality system – it was theirs, not mine!

August: Gave an interactive presentation on the Gravesian approach and organisation lifecycle concepts to the Grimsby Europarc Innovation Circle.
Commentary: The Innovation Circle was Jennifer Crossland’s ‘baby’ – an attempt to create a network of (mostly) fast-growth technology-oriented SMEs. The meetings schedule covered a very wide range of topics.

November: Designed and developed web site for ICW.
Commentary: I put together a basic site for the company as a temporary measure while they investigated having a professional design outfit build a more professional-looking site.

November-December: Designed and delivered An Introduction to Spiral Dynamics for NLP Master Practitioners for Summit Consulting, near Beverley. Some of their ‘graduates’ joined the Humberside MESH Network.
Commentary: Summit bosses Wendy Baxter and Linda Riley were real NLP enthusiasts – both Master Practicitioners, Wendy went on to become a trainer. They asked me to train them in the Gravesian approach and opened it up to other ‘Master Pracs’ they knew to make their training pay for itself.
Gallery: Summit participants, December – click on photo to enlarge.