PART 2
The social system and its citizens
As governance of social systems such as nation states become more complex over time, the distance between the citizenry and the social structures built for their benefit tends to grow. This results in a sense of victimization in citizens and a loss of accountability in leaders, as an increasingly-centralized government fails to meet the expectations of the people it is intended to serve.

Mike Jay (2010a) identified 6 factors in social change, each of which operates at a different speed:-

As scientific and technological advances enable us to create new systems and realities at an ever faster pace, the development of content is exponentially faster than development of the other dimensions, as illustrated in the chart below (Jay, 2010b)… 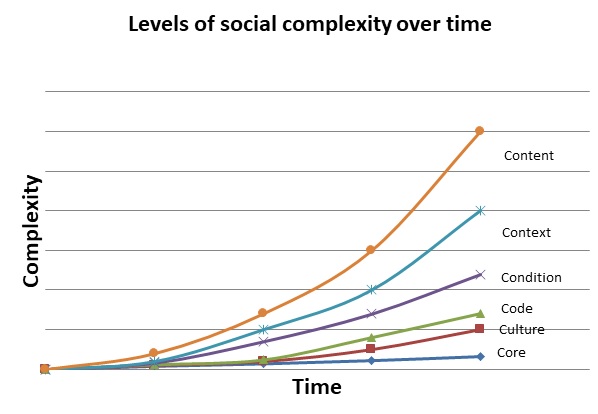 The discrepancy between content (an increasingly intricate social reality) and the society’s tools for coping with these changes creates a dangerous incoherence (Beck & Cowan, 1996). The goal, of course, is not to hold the advancement of the society down to the level of its existing culture, but to grow the society’s core, culture, and code at a pace that does not generate destructive conflict (Beck & Cowan; Ichak Adizes, 1996; Jay, 2010a).

A number of societies at a similar level of growth as Iceland have moved toward technocracy, where all major input for public policy making is in the hands of specialists and the public is not trusted to interfere in the process. The Iceland process argues that it should be the other way around: specialists should not be trusted to reign over the evolution of a society and citizens can be trusted to provide essential guidance. It is evident that there are great social imbalances and biases in most industrialized societies, and that changes are necessary in these human systems to promote resilience, health, and sustainability. It would seem wise to ensure citizen input in the visioning of needed changes.

Communicative engagement and visioning
David Bohm (1994) maintained that nations are established by thought and that all emergent human systems are planned and conceived by an individual or individuals governed by their thoughts and ideas; our thoughts command us as individuals with various, interrelated systemic and sub-systemic factors. Societies are also a composition of collective thoughts with similarly interrelated environmental, cultural, systemic and sub-systemic factors. Thought is our being, or as Bohm (p42) put it: “… thought is not merely the intellectual activity; rather it is one connected process which includes feeling and the body, and so on … we call that process a “system”—a whole system in which every part is dependent on every other part.”

A related theory of human thought was explained by Lynda Gratton in her book, Living Strategy (2000, p13): “Human time is felt in two ways: First, by the ticking of the human clock, by the stages of human development, by the time it takes to build commitment and inspiration; second, by our deep immersion in time, in the memories and commitments of the past, in the excitement of the present, and in the dreams and hopes of the future. We are not creatures of the moment. On the contrary, each of us has our own personal history and memory which influence the way we see our world and the expectations and hopes we have for it.”

This is significant in that the key to anticipate the future and prepare the system to change is our foresight, which is affected by our experience of the past, a narrative knowledge. As Haridimos Tsoukas explains (Gratton, p255): “Narratives not only allow for multiple connections among events across time, they also preserve multiple temporalities. As well as being linked to clock time, narrative time is primarily humanly relevant time.”

Gratton (p16) further noted the ways that our thinking processes operate in time:-

We have a tendency to judge the future by the past, evident in statements such as “We have tried this before”, “Every cloud has a silver lining”, “There is nothing to worry about; this is not the first time”, and so on. If our thoughts delude us into perceiving a situation differently than it actually is, we may find a very serious trap awaiting us. The Assembly Process is a way to take participants out of their accustomed thought patterns and give them a fresh look at their situation. It helps them to not only envision a desired future, but shape their thoughts toward making that future a reality.

The new ‘New Deal’: human systems change in the Internet Age
Most governance structures in today‘s societies were developed and implemented prior to the ‘Internet Age’. Evolving social media platforms are still in their infancy and fall far short in their current forms to play a constructive and systematic role in large-scale social change and governance processes. Rapid developments in technology for electronic collaboration (social media with a purpose) will open new dimensions for harnessing momentum – eg: collaboration will be based on the needs of citizens themselves and with their own participation.

From the Wall Street Occupy Movement, to the Arab Spring which swept much of the Middle East, to the unrest overtaking many other developed economies, I believe that the tools and techniques discussed in this chapter together with a paradigm shift in communication technology hold promise for engaging the populace in the social and governmental changes now unfolding across the world. I believe that we can and should use these tools and techniques to engage those who are subject to socioeconomic forces to shape those very forces toward the greater social good.

Unity out of diversity in human systems
The Assembly Process, developed with the aid of Participatory Action Research (Stephen Kemmis & Robin McTaggart, 2005) and Grounded Theory (content analysis) (Kathy Charmaz, 2005), can establish a base for unity within a given social system. Humberto Maturana & Francisco Varela (1987) outlined the importance of interpersonal communication within a human system to its unity and growth. An authentic public sphere, in which participants can express their thoughts in a safe and uncritical environment, is necessary for social learning and to harness collective intelligence. This enables genuine joint meaning-making through sharing of experience and storytelling. The result is a representative view of the desired identity, values and vision.

Theoretical basis for the CSE understanding of human systems
The assumption that any human social system must grow and develop on its own terms is guided by SDi (1974), originated by the late  Clare W Graves, former professor emeritus of Psychology at Union College, New York. The theory was further developed by Don Beck, who with Chris Cowan, described it in their book ‘Spiral Dynamics: Mastering Values, Leadership and Change’. SDi assumes human emergence as an open-ended evolution, occurring in stages according to the complexity of prevailing life conditions.

Another significant theory supporting the above assumptions is the concept of lifecycles of living systems (Adizes, 1999). It holds that a human social system’s evolutionary level may be gauged by studying its problems of existence (its level of unity or disintegration and, therefore, the degree of adaptation to its environment) and framed in terms of its position in a lifecycle. Maturana & Varela stated that, when a destructive interaction between a living being and its environment occurs, the former disintegrates and loses its ability to adapt. Adizes pointed out that lifecycle stages could be classified as either growth or ageing. Many problems of existence experienced during the growth era are normal, while some could be abnormal or pathological. On the other hand, all problems of existence experienced in the ageing part of the lifecycle are, by definition, abnormal or pathological; the system is disintegrating from the environment and ultimately within itself, losing its adaptation.

Another important factor in the adaptation of living organisms is autopoiesis. This concept was first developed by Maturana & Varela, who stated that living systems are characterized by 3 principal features: autonomy, circularity and self-reference which enable them to self-create or self-renew through closed systems of relations.  The Assembly Process invited and evidenced this self-organizing principle of human systems.

CSE application areas
This chapter closes with a non-exclusive summary of human social systems where actual application of the model have taken place and been of significance:

My experience in Iceland and beyond, plus the theoretical frameworks that informed this experience, indicate there is a way to engage the collective intelligence of a community, even as large as a nation. This collective intelligence can provide essential direction and a helpful influence on the healthy emergence of what is next for a community or nation. Transformation can be intentional.