Donald Trump’s sending of his followers to Congress (Wednesday 6th) to protest the certifying of Joe Biden’s election victory ended the way it inevitably would: in violence. That Trump sent his followers as he did was bizarre. A single protest by a few thousand people was never going to stop Congress doing its job.

The protest, of course, turned into a riot and the storming of Congress. That it got so far was equally bizarre. The followers becoming violent was so predictable it was nothing less than astonishing that the Capitol Police, who knew well in advance about the protest, weren’t much, much better prepared. The photo below shows how well the nearby Lincoln Memorial was protected during the Black Lives Matter protest in June last year. That Congress wasn’t equally well-protected beggars belief. 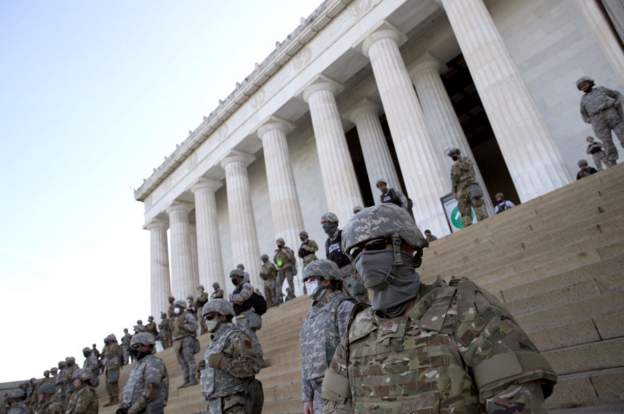 The astonishing ineptitude of the police operation – especially when compared to the Lincoln Memorial guard -has prompted accusations of racial bias. (No doubt fuelled by video footage of some officers opening barriers for protestors and protestors’ selfies with compliant officers inside the Capitol building)

In the immediate aftermath the media pundits around much of the world are puzzling about what the storming of Congress means for a very divided and troubled country.

Will there be further violence? 5 people arrested for carrying firearms illegally and the discovery of pipe bombs clearly signals that at least some of the rioters had pre-planned violence. Are there more acts of violence planned in the next 2 weeks – even to disrupt Joe Biden’s inauguration?

Will Trump incite the far right even more? On the one hand he has now promised “there will be an orderly transition on January 20th“; on the other he gives far more Twitter space to: “Even though I totally disagree with the outcome of the election, and the facts bear me out … I have always said we would continue our fight to ensure that only legal votes were counted. While this represents the end of the greatest first term in presidential history, it’s only the beginning of our fight to Make America Great Again!” 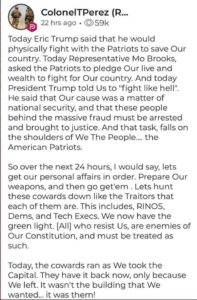 The talk of fighting is worrisome. Clearly, as the social media extract left shows – citing Trump’s son, Eric – that talk of fighting does include the “physical” and the use of weapons. The FBI hopefully will have intelligence on just how much of a threat such hard right white supremacist groups really pose in the bigger picture…but, given the firepower some of these groups have, they are certainly capable of launching highly-lethal assaults.

In his carefully-worded video (released on Twitter) in the early hours of 8 January, Trump condemns the criminal actions of those who stormed the Capitol but does not state the march on the Capitol was wrong. He concedes that there will be a new administration and says he will help facilitate “a seamless transition”. However, he does not withdraw any of his allegations of electoral fraud. As the Financial Times’ Aime Williams notes, he doesn’t even mention Biden by name. Trump is most likely playing reasonable so that vice-president Mike Pence can’t justify invoking the 25th Amendment that he is unfit to rule, as Democrat leaders Chuck Schumer and Nancy Pelosi are calling for.

Later on the 8th Trump tweeted: “The 75,000,000 great American Patriots who voted for me, AMERICA FIRST, and MAKE AMERICA GREAT AGAIN, will have a GIANT VOICE long into the future. They will not be disrespected or treated unfairly in any way, shape or form!!!” This makes it very unlikely Trump has any intention of disappearing quietly from American politics. If he carries on, he’s going to continue to be a lightning rod for white supremacist groups, an embarrassment to moderate Republicans and trouble for Biden’s administration.

So far Trump has played a crafty, if arguably deranged game. He never actually tells his followers to commit violence but he avoids condemning them and tells them they’re ”good people” and “special” and that he loves them. His mid-pandemic tweets to ‘liberate’ Virginia and Michigan and his election debate message to the Proud Boys to “stand back and stand by” are possibly the closest he’s actually come to calling for action prior to Wednesday’s March. Even then, he didn’t call for violence – just a march past Congress. It was Trump’s lawyer (and former mayor of New York City) Rudy Giuliani, speaking before Trump, who called for the disputed election to be settled by “trial by combat”. Even as senators were being evacuated, Giuliani tweeted that the rioters were “on the right side of the law and history”. Donald Trump hasn’t promised to “physically fight with the Patriots” but reputedly his son Eric has.

In SocioPsychological terms Trump’s thinking seems to be dominated by the RED vMEME while his impulsiveness, compulsiveness, ruthlessness and a history of open sexual predatoriness seem to indicate he is very high on the Psychoticism Dimension of Temperament. Part-narcissistic psychopath, obsessed with himself and lacking both conscience and empathy for others. Part-sociopath, he really doesn’t seem to care what happens to people and appears to be more than content for the United States to tear itself apart, whatever the cost to others.

If my meta-stating of Trump is correct, then he is a truly dangerous man.

The patterns of ruthless dictators
One of the remarkable things about the Trump story is that it follows a broad pattern.  I’ve often seen on Facebook, assertions that, if you want to know how Germans in the 1930s allowed their country to become a Nazi state, look at how so many Americans have allowed Trump to facilitate racism, distrust and increasing centralisation of power into the White House.

There seem to be 2 primary routes for extremist political ‘hard men’ who become dictatorial leaders. One, of course, is to work your way up a controlling, totalitarian political system – as Joseph Stalin did in the Soviet Union and as Xi Jinping has done in China. In countries which, at least nominally espouse one person/one (secret) vote Democracy, some different conditions are needed. Yet, from Benito Mussolini and Adolf Hitler to Viktor Orbán in Hungary and Donald Trump, there are pretty similar patterns in their rise to power:-

The problem for the backers of the hard men is that they all too often lose control of their hard men. The Rhur industrialists lost control of Hitler – to the cost of millions upon millions of people – and what Guy Standing (2009)  calls the Plutocrats and their lackeys in the Elite lost control of Trump. The RED/BLUE zealotry of the 2016 campaign – eg: ‘draining the swamp’ – rapidly dissipated into RED I-can-do-whatever-I-want short-termist excess, fuelled by narcistic Psychoticism. Eventually more moderate Republicans recognised Trump was out of control – hence, the birth of anti-Trump Republican groups like the Lincoln Project. Anti-Trumpism became increasingly more acceptable amongst Republicans with the Democrats putting up a centrist candidate in Joe Biden. Trump’s RED/BLUE zealotry reappeared a little in the 2020 campaign and is now growing significantly – at least as a public face. Trump is now (supposedly) all about respecting the 75 million Americans who voted for him and seeing that they are not disenfranchised.

You can’t tell 75 million Americans they are wrong!
How deeply Trump’s followers believe in him was really brought home to me on Thursday (7th) by interviews with Trump supporters in Washington DC – eg: NBC News‘ Phil McCausland. The leftover protesters showed little or no remorse for their assault on the Capitol and, to a man and a woman, still believed the election had been ‘stolen’. Moreover, many of them turned their anger on Mike Pence, accusing him of being part of the ‘Deep State’ Trump had said he was crusading against back in 2016. The fact that Pence had stated to Congress that he did not have the power under the Constitution to intervene in the certification process was ignored: he was branded a traitor for not carrying out Trump’s wishes. Some even called him a paedophile member of QA Anon.

More broadly across the US, pollsters are finding there is significant support among Republicans for the assault on the Capitol – one YouGov poll reportedly finding 45% of its sample supported the riot (Gino Spocchia, The Independent). Clearly, if Trump can avoid impeachment and/or going to prison – there are multiple civil lawsuits and potential criminal prosecutions awaiting the end of his term – there is a very large and very strong support base for him to exploit.

We have learned in the UK over the past 4 years with the Brexit debates that it’s all but impossible to change the vast majority of people’s minds once memes have become entrenched as deeply-held schemas, whether the memes are an accurate representation of reality or not. (Polls in December projected 38% of British voters still wanting Brexit, according to The Ecoonomist, with most of the increase in Remainers coming from previously-undecideds rather than converts.)

So simply telling 75 million Americans they’re wrong isn’t going to undermine Trump’s power base. For some, being told they are deviant will merely result in deviancy amplification, increasing their sense of alienation from mainstream liberal democracy and the hardening of their sub-culture.

As I argued in Race and Demographics: Biden’s Challenge, the way to undermine the very real threat that the hard right present is to acknowledge their fears, understand them and address them in ways that diffuse their fear and allow them to be comfortable in an ethnically-diverse liberal democracy. As the Assimilation-Contrast Effect predicts, there will be a hardcore who will remain stuck, entrenched in their fear and bitterness; however, by meeting their needs, the majority will be able to move to new ways of thinking.

How we do these things is, of course, incredibly complex, requiring multiple, multiple MeshWORKS co-ordinated by what Spiral Dynamics co-founder Don Beck calls ‘brain syndicates’ of advanced 2nd Tier thinkers. In order to diffuse the power bases of the extremist political hard men, it may even be that global Capitalism needs structured makeovers so that we minimise the flight of jobs overseas and the resulting mass unemployment – so that economies are collaborative rather than competitive.

So the 2nd Tier thinkers need to start getting those brain syndicates together…quickly!