The UK government has never had much of a strategy for dealing with coronavirus.

Locking down late long after the scientists told them to – all 3 times. Failing to secure adequate PPE right through the first wave. Discharging untested elderly patients from hospitals into care homes. Spending £12 BN on track & trace systems that failed completely or have been only partially effective. Uneven and unfair financial support for those who have lost income. Failing to secure the UK’s borders against potential Covid-carriers.

But with the ambitious vaccine programme being rolled out, it did seem the Government was at last getting it right. Close on 5,900,000 had received the first dose by Saturday. Very impressive!

But, at Friday’s sombre and testy Downing Street press conference, it looked like the proverbial wheels might be coming off again…

No wonder the press conference had a decidedly grim ambience to it. 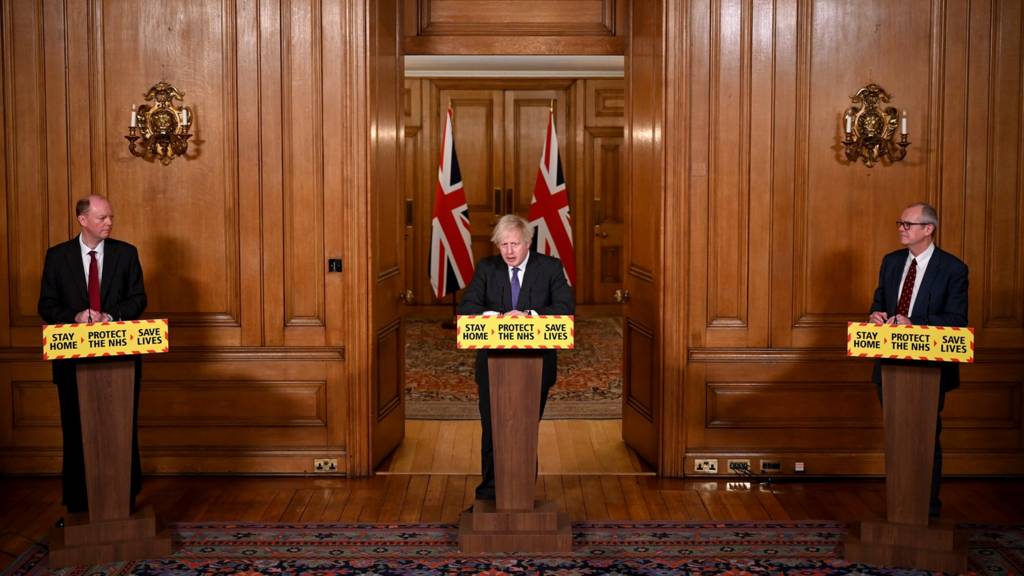 A change in tone
What was also notable about the press conference was Johnson refusing to be drawn into giving any timeline for when the lockdown might be lifted beyond restating the 15 February review date and giving the usual platitude that schools would be reopened as soon as possible. (Johnson’s reluctance to commit echoed by Hancock on Marr this morning.)

There was little of Johnson’s typical boyish optimism. Whitty used the words “in very deep trouble” twice to warn of the dangers of failing to suppress virus transmission.

Is it finally beginning to dawn on the Government and its top advisers that the their strategies haven’t worked and aren’t going to work?

To be fair, it’s not just the UK that’s struggling. While some countries – most notably, New Zealand, Australia and South Korea – have excelled at controlling the virus – in many others the virus is out of control. It is widely reported – eg: Euan Marshall in the Daily Telegraph – that hospitals in some parts of Brazil have run out of oxygen. Only a few days into his presidency, Joe Biden is said to be concerned the American death toll could pass 600,000 (Emily Goodin, Daily Mail).

Is it becoming increasingly possible that Covid-19 really could be a potential game changer for human society?

As Alex Deane noted on Friday night’s Sky News Press Preview, viruses normally have less effect over time. Clint Witchalls (2020) talks about how viruses usually fade away, becoming less virulent. The reasons for this are not properly understood but include the development of herd immunity, environmental weather patterns, the mutation of the virus itself to become less potent, etc. However, as Deane stated, Covid-19 is becoming more virulent and potent – becoming both more transmissible and more lethal.

With deaths at their highest, infections only decreased by about a third and hospitals jammed full with coronavirus patients, the news of yet more deadly variants could hardly come at a worse time.

And, of course, the medical world has barely begun to understand Long Covid and its debilitating effects…but on 16 December the Office for National Statistics was reported to estimate over 150,000 UK citizens were suffering from it (Rachel Schraer, BBC News).

Radical rethink required
When we have a global problem, why isn’t the problem being tacked at a global level?

Many commentators are drawing comparisons with the Spanish Flu pandemic of 1918-20 and trying to learn from it. According to History.Com (2020), mandatory masks, partial lockdowns and attempts to create social distancing were put into play but largely societies attempted simply to carry on. The result was a third of the world’s population infected and around 50 million people killed. Niall Johnson & ,Juergen Mueller (2002) contend that the generally-accepted 50 million figure is a significant underestimate and that, from their extensive research, the true death toll may be up to 100 million.

Because it came at the tail end of World War I, with many countries still using forceful censorship of what media there was, and the world rapidly fell into new crises – the Great Depression and then World War II – the unbelievable ravages of the Spanish Flu have largely been overlooked. The work of Douglas Jordan (2019) at the Centers for Disease Control & Prevention is highly recommended for those who would like to know what happens when the world really fails to control a pandemic.

If we are to avoid devastation on that kind of level, then governments around the world need to step up their activity and their cooperation to develop jointly-owned strategies to control the disease. In this way, it may be possible to contain new variants and limit their spread.

John Bunzl (2013) calls this ‘Simultaneous Policy’ – or Simpol, for short – where the governments of the world come together to decide on joint policies and strategies to implement simultaneously around the world. Certainly the institutions – eg: the United Nations General Assembly and the World Health Organisation – to support such collaboration are already there, in part at least. It becomes then a question of political will.

Whereas, in Donald Trump the world had an American president who loved to point the finger of blame at others – hence ‘the Chinese virus’ – in Joe Biden we have a diplomatic facilitator who appears capable of building the political alliances necessary to bring about such cooperation and collaboration.

In developing their strategies the world’s leaders need to model those countries like New Zealand, which have been so successful in tackling coronavirus, and ask how such actions could be implemented in their country.

If such cooperation seems a far-fetched fantasy in a world of competing ideologies and economic interests, Bunzl is keen to stress the principle of subsidiarity. Within the Simpol collaboration, each country remains free to pursue its own destiny. So the United States can remain the centre of free market Capitalism and Democracy while China continues its pursuit of authoritarian Capitalism and Cuba carries on as a small-scale centre of  Communism.

Once Simpol is agreed in principle, a MeshWORK approach of respecting and enabling all cultural values within the framework of a global assault on the virus could provide an operational structure for combatting it.

Other than bumbling on into something near the level of disaster of the Spanish Flu, it appears there is little alternative to some form of international collaboration along the lines Bunzl suggests.

Even Boris Johnson, in all his limited thinking, increasingly appears to recognise that the lockdown-when-infections-increase/release-when-infections-decrease cycle is not going to save either lives or livelihoods in even the medium term. Hence he won’t provide a hard timeline for easing restrictions. Whether he can resist the pressure on him from his open-the-economy-at-all-costs backbenchers is another matter.

Living under lockdown
It’s real possibility that, to combat Covid-19 and its lethal mutant variants effectively, we may have to stay under some form of lockdown for many months – possibly even another year or more. That, for a great many people, is depressing and totally unpalatable.

The costs to society will be considerable – arguably on the level of fighting a major war. Education will be severely disrupted. Hundreds of thousands of jobs around the world will be lost. Care for other health issues will be compromised. Mental health problems, especially in urban areas, will mushroom.

And the effects will not be felt equally. Poorer people in Western countries will suffer more than richer people, with social mobility severely compromised. Poorer countries, with less developed health care and education systems, will be hit far more than the wealthier countries.

Politicians the world around need to face up to these likely consequences and stop trying to gloss over the worst with foolishly optimistic pronouncements –  – as Johnson has done so often. In Gravesian/Maslowian terms the coronavirus crisis is on the verge of becoming a BEIGE level survival issue. As part of a MeshWORK structure, the worst effects of a Simpol-type joint global attack on the virus, can be anticipated and remedial measures taken to minimise as far as possible those worst effects.

For all the unpalatability and the severe consequences of lockdown restrictions, humans are highly adaptable and inventive creatures. Once governments level with their populations on just how serious the situation is and just what measures are needed and for how long, many will buckle down and ‘get on with it’. A personal anecdote: both my wife and my stepdaughter have spoken this past week about how they’re getting used to not mixing with people and are developing manageable routines. Of course, neither my wife nor my stepdaughter live in a high rise in a small flat with 3 bored and frustrated children!

Ways of living and working will have to change – and to a degree they already have. Many, many people work from home, teams work via Microsoft Teams and business meetings are often conducted by Zoom or Google Meet. Teaching is going online – albeit rather creakily by many accounts – as are most consultations with GPs. Using a MeshWORK approach will give structure and focus to accelerate such naturally-evolving patterns, as well as finding means to compensate where work requires people to work in close proximity. One example could be giving construction workers dentist-standard PPE…

Of course, a minority will still suffer, no matter what mitigating strategies are put in place – and their suffering should never be discounted or ignored. But, for the greater good, what alternatives are there?

Our World in Data’s Max Roser (2020) calculates that, on an estimated world population of  1.8 billion, the generally accepted death toll of 50 million deaths in the Spanish Flu took out 2.7% of humanity. If Johnson & Mueller’s higher estimate of 100 million deaths is correct, the Spanish Flu wiped out 5.4% of the world’s population. Applying those statistics to today’s global population of 7.8 billion, 2.7% would mean over 210 million deaths and 5.4% 420 million deaths. Of course, even if governments like the UK’s do no more than they presently do, modern medicines and medical techniques would mean coronavirus fatalities are unlikely to reach quite such high numbers.

Nonetheless, the cost in human deaths, misery and suffering from relative inaction against the virus is unthinkable for a modern Western ‘democratic’ government. More action is needed -and quickly!

Trump and the Attraction of the Extremist Political Hard Man Coronavirus Crisis: can We go back to ‘Normal’?