The RED vMEME is strong in the vMEME stack of most politicians. Granted, there may be a sense of calling to public duty (BLUE) for some while others may see becoming a politician as personal career progression ORANGE); but there will almost always be strong RED. The schemas in the selfplex that I am important…that I have the answers…that I can make a difference…. This RED drive will enable these people to put themselves forward, to shout louder in a world of noise where he or she who shouts loudest is the one most often others listen to. It will literally drive them to work long hours, cajole potential allies and bully enemies, and build power networks with ‘subservient lesser beings’ dependent on their favours.

Strong RED, lacking any real anticipation of consequences, will make promises it can’t keep and tell lies it can’t possibly substantiate to avoid the immediate shame of seeming powerless under pressure from ‘challenging lesser beings’.

RED is usually mediated by BLUE and ORANGE in most politicians. Such strong RED gets out of hand from time to time so politicians tell stupid and indefensible lies, get caught having sex with someone they shouldn’t, fail to declare a manifest conflict of interest or even take bribes. It’s almost – but not quite! – inevitable and many manage to bounce back. In current and recent UK governments, Boris Johnson (numerous offensive gaffes, pre-prime minister), Liam Fox and Priti Patel (both national security issues), Andrew Mitchell (‘plebgate’), Jeremy Hunt (allegations of money laundering), Michael Gove and David Cameron (revelations of drug-taking) are just some of the ministers who have recovered from potentially-career trashing ‘mistakes’. They seem able to do this because they just duck around the issue that brought them down – refusing to acknowledge their shame. There is no better example of this than Tony Blair and the ‘dodgy dossier’ he had fabricated as reason to take the UK into the disastrous war in Iraq in 2003. Blair almost never engages in public on that issue if he can help it. RED refusing to acknowledge its shame.

The problem the United States and the United Kingdom currently have is that their respective leaders appear to think in terms no more complex than RED. Boris Johnson and Donald Trump are far more concerned with establishing, maintaining and developing their personal power bases than they are with the welfare of their countries and their citizens. They treat their countries as personal fiefdoms for their own wealth and power aggrandisement. They expect their word to be law – how ever much they contradict themselves at times – their ministers and secretaries are to be unwaveringly loyal or are dismissed, and the ‘people’ are to be fed ‘good news’ platitudes while their actual needs are largely neglected.

Such thinking is typical of early Medieval kings, for whom it largely worked. Rule was by power – often with brute force. The lords were frequently exiled or culled to break up their putative anti-monarch alliances and the serfs were treated as the property of the king, to do with as he wished. Probably the closest we have had in recent times to such a Medieval-type power structure was in Saddam Hussein‘s Iraq. However, such a way of thinking is totally inadequate for Western Late-Modern democracies in a global world – especially in a near-overwhelming crisis as we currently have with the cornonavirus pandemic.

The US and the UK have the highest infection rates. The US has the highest mortality rate in the world – though Brazil’s rapid acceleration in deaths is now pushing close. The UK has the third highest number of deaths. Their governments have consistently failed to protect their citizens from the worst ravages of the pandemic as the graphic below of European CDC estimates of daily Covid-19-related deaths shows. (Interestingly, Brazil is controlled by another Trump-style authoritarian, Jair Bolsonaro.) 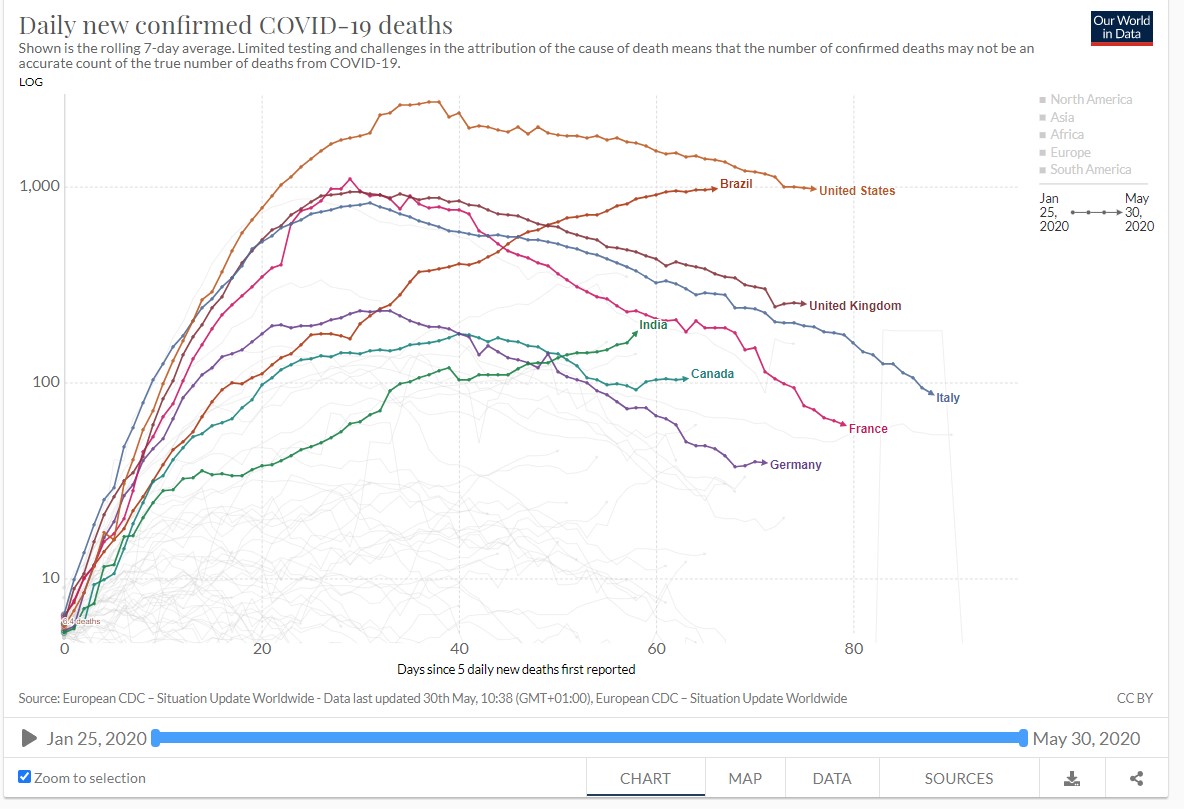 RED-thinking Trump
Donald Trump was elected on a toxic mix of near-blatant racism and impossible promises of restoring jobs to America’s ‘left behind’ – those lost to the New International Division of Labour. Behind Trump were the very people who had taken those jobs away from American workers in the first place, what Guy Standing (2009) terms the Plutocracy. The aim of the Plutocracy and the Elite – next level down in the wealth and power list – was the dismantling of the regulations which restrained their ability to generate unlimited profit – see How the Plutocrats are waging War on the Bureaucrats…. While Trump’s shenanigans with porn stars, hugely-expensive golfing breaks, allegations of fraud (students, veterans, children’s charity), his refusal to release his tax returns, threats against Iran and his largely pointless meeting with North Korea’s Kim Jong Un have garnered frenzied media attention, behind the scenes his administration has been getting on with deconstructing America’s regulatory framework. According to the Brookings Institution, some 215 regulations have been affected – either undermined by supplementary legislation or repealed – while the White House has colluded with the Republican-controlled Senate to stall new legislation that would impose additional controls.

However, Trump’s responses to the coronavirus crisis has demonstrated the severe limitations and contradictions in his thinking – as the the timeline of his statements in the first months of 2020 show all too clearly… 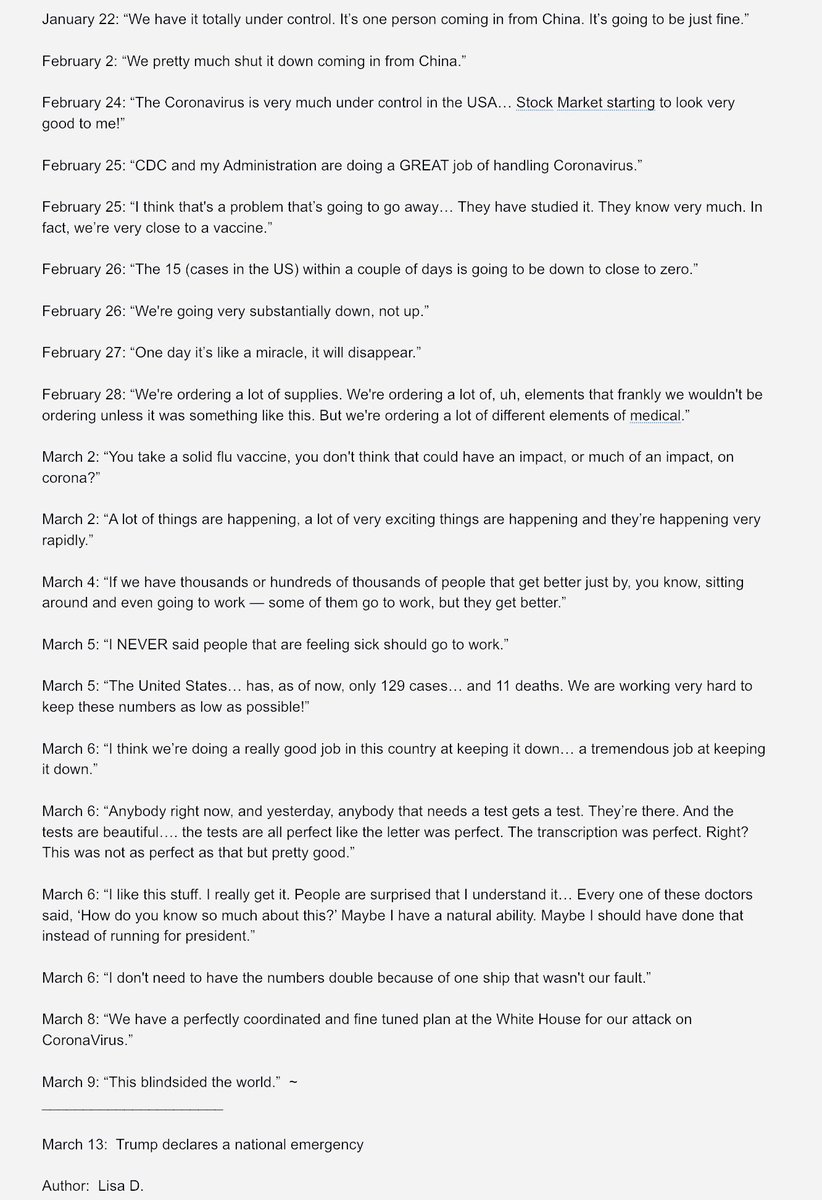 Timeline of Trump’s early statements on Covid-19, compiled by Erin Perrine on Twitter

There have been numerous assertions that Trump’s inconsistencies and complete turnarounds reflect serious mental health problems – eg: the World Mental Health Coalition (reported by The Independent’s Alex Woodward) – although RED, in its desire to avoid shame, can be terribly inconsistent. Certainly his obsession with himself to the exclusion of all other priorities could well be an indicator of Narcissistic Personality Disorder. His impulsiveness, ruthlessness and sexual predations indicate he is high on the Psychoticism Dimension of Temperament. He also shows signs of Sociopathy, with a real dislike of society. In his encouragements of armed white anti-lockdown protesters a few weeks back and now tweeting for mainly black George Floyd-murder protestors to be shot if they loot, he seems ready to fan the flames of racial violence. Some might presume, from the way he conducts himself, that he actually enjoys causing such chaos! 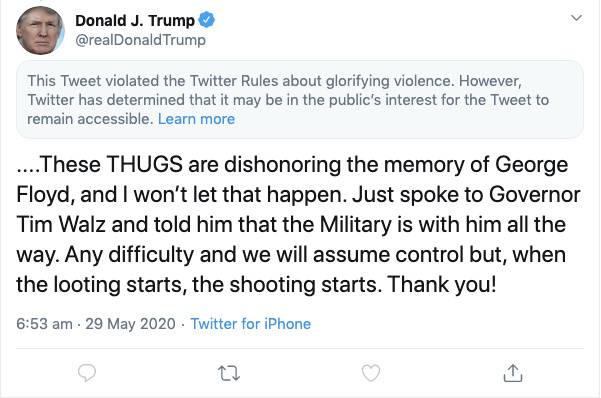 Trump’s backers in the Plutocracy and the Elite tend to think from the ORANGE vMEME. According to Said E Dawlabani (2013), all that matters to them is money and their ORANGE thinking has become toxic. (While we must be  careful to avoid treating the Plutocracy as a completely homogeneous group, as a generalisation Dawlabani’s critique seems valid.) However, it may be that their stooge, Trump, is becoming too erratic and unreliable for them – that they can see Trump is simply not up to the job. With well over 100,000 Americans dead from Covid-19 and little sign of Trump’s administration getting it under control, small but determined groups of influential Republicans are taking against him. As discussed in Could the Political Centre be making a Comeback?, the leaders of The Lincoln Project have even stated that they will vote for Joe Biden in November’s presidential election!

RED-thinking Johnson…and Dominic Cummings?
Boris Johnson is similar to Trump in so many ways – impulsive, a liar and a fantasist, a sexual predator. If his thinking is dominated by RED and he has a Psychoticist temperament, thankfully he has yet to demonstrate the levels of Sociopathy Trump does.

Like Trump, he is glaringly inconsistent, obsessed with his own power and popularity – and, like Trump, he has proved hopeless and unconcerned in the battle against coronavirus.

Even more than Trump perhaps, he cracks under pressure and becomes near incomprehensible. The Sky News clip below is taken from last Monday’s Downing Street briefing when political editor Beth Rigby pressed him on the issue of whether he was protecting chief advisor Dominic Cummings over his infamous lockdown-breaking trip to Barnard Castle because he couldn’t do without Cummings…

Watching the clip, it’s easy to see why one erudite commentator on Facebook described Johnson’s response as “piffle paffle”!

As far as is known, Trump has no obvious Cummings-like adviser these days. It may be that white supremacist Steve Bannon played something of that role in the 2016 election and the early days of Trump’s administration but they have long since fallen out.) Johnson clearly seems to have a dependency on Cummings – that or, as some have speculated, Cummings knows too much for Johnson to risk sacking him.

Cummings has long been hailed by the hard right and Brexiteers as the mastermind behind Vote Leave’s winning of the 2016 European Union referendum. He is also said to be behind Johnson’s election-winning Get Brexit Done! strategy late last year. However, if Cummings is capable of great strategic thinking, his ORANGE was nowhere to be seen in early April when he flouted the BLUE lockdown rules. Similarly it must have been RED thinking – on both his and Johnson’s part – to think the cock’n’bull story about driving to test his eyesight, which he tried to pass off at his press conference last Monday, would go down well with the public. Clearly, judging from the clogged-up email in-boxes of Tory MPs, it didn’t. At the latest count – reported by Rowena Mason (2020b) in The Guardian -45 Tory MPs have demanded that Cummings go while another 55 have openly criticised the Government’s defence of Cummings.

It may be that, just as Trump’s backers in the Plutocracy and the Elite have turned against him, Johnson is losing favour too. Jonathan Calvert, George Arbuthnott & Jonathan Leake wrote a devastating expose in The Sunday Times (19 April) of the ignorance and incompetence of Johnson and his ministers and the opportunities they missed to stem the assault of Covid-19 in the first month or so of its appearance in the UK. A number of other UK media outlets have gleefully commented on Johnson’s failures; what made this different was The Sunday Times is owned by Rupert Murdoch, arguably the most powerful media tycoon in the world and a true Plutocrat. The Cummings affair even aroused the ire of the Daily Mail. Usually fanatical in its unswerving loyalty to the Conservatives, it is owned by a trust of which  is the controlling shareholder and in the upper echelons of the Elite.

What next?
Clearly what is needed is 2nd Tier leadership – as discussed briefly in Leadership – a SocioPsychological Perspective. However, it extremely unlikely that’s going to happen in the short term. If Covid-19 maintains its grip on the world, then that may well bring about some form of change of paradigm – though to what it is impossible to say at this stage. Logically, there should be an upward progression to GREEN collectivistic thinking. However. GREEN thinking is fairly dominant in Scandinavian culture and Sweden has made a major mess of its coronavirus strategy, precipitating many needless deaths.

Especially with many influential Republicans now determined to get Trump out in November, there is a real possibility Joe Biden could become the next US president. Hardly the most inspiring and visionary of figures, he  nevertheless could be a conduit for more systemic thinking, particularly if Elizabeth Warren becomes his running mate. Here in the UK we’re stuck with Johnson for another 4.5 years unless a scandal, such as the Cummings affair, brings him down or the Tories become so disenchanted with his incompetence and near-nonsensical bluster that they decide to replace him. There is also the potential additional disaster of a no-deal Brexit to focus those Tory minds who can anticipate the consequences of further economic hardship on top of the ravages of Covid-19. Exactly who would replace Johnson and whether there would be the will on all sides to form a government of national unity to steer the UK through this crisis/these crises is unfortunately in the hands of the Conservative Party and their uber-rich backers.

Could the Political Centre be making a Comeback? Race and Demographics: Biden’s Challenge