It’s somewhat astonishing that, in the second week of the UK general election campaign, the Conservatives are polling at an average of 39%, according to the Press Association’s rolling average of voter intentions (highlighted by the Evening Standard’s Rebecca Speare-Coles) – see below. True, Labour are creeping up, now on 29%. But, in what has been a calamitous 10 days for the Tories – from Jacob Rees Mogg’s highly-insensitive comments implying a lack of common sense amongst those who perished in 2017’s Grenfell Tower disaster to Boris Johnson’s hostile reception from South Yorkshire flood victims – Labour should be doing much better. 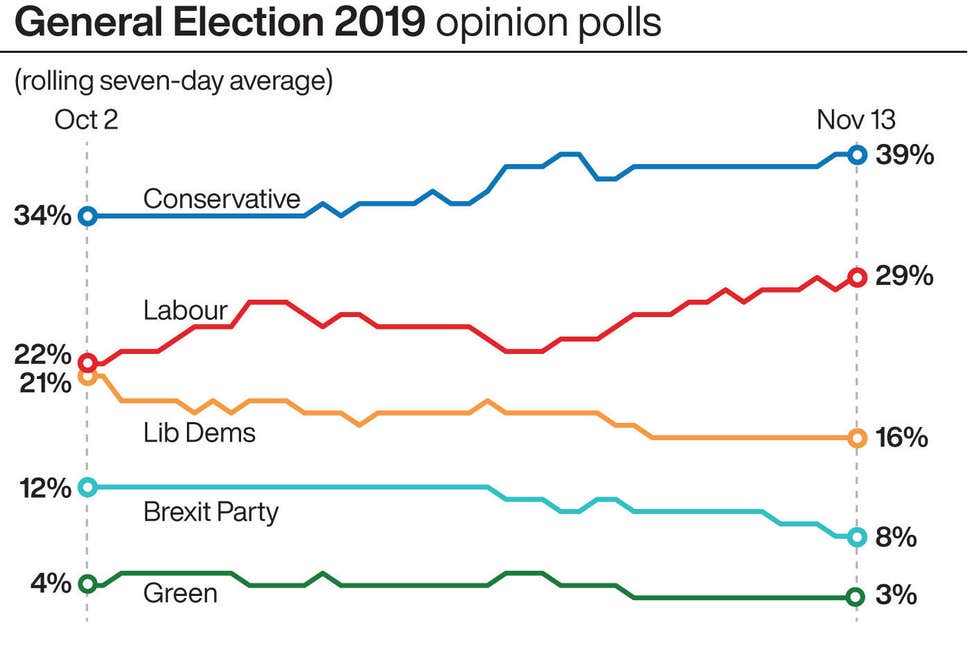 But what about the poor old Liberal Democrats? When the latest (9 November) NatCen Poll of Polls – see below – puts Remain on 53% to Leave’s 47%, how come the Lib Dems have slumped from 21% to just 16%? Given that they are unequivocally Remain and would like to revoke Article 50 without even the formality of a second EU referendum, it is also somewhat astonishing that their voter intentions have slipped so much. Potentially disastrously so! 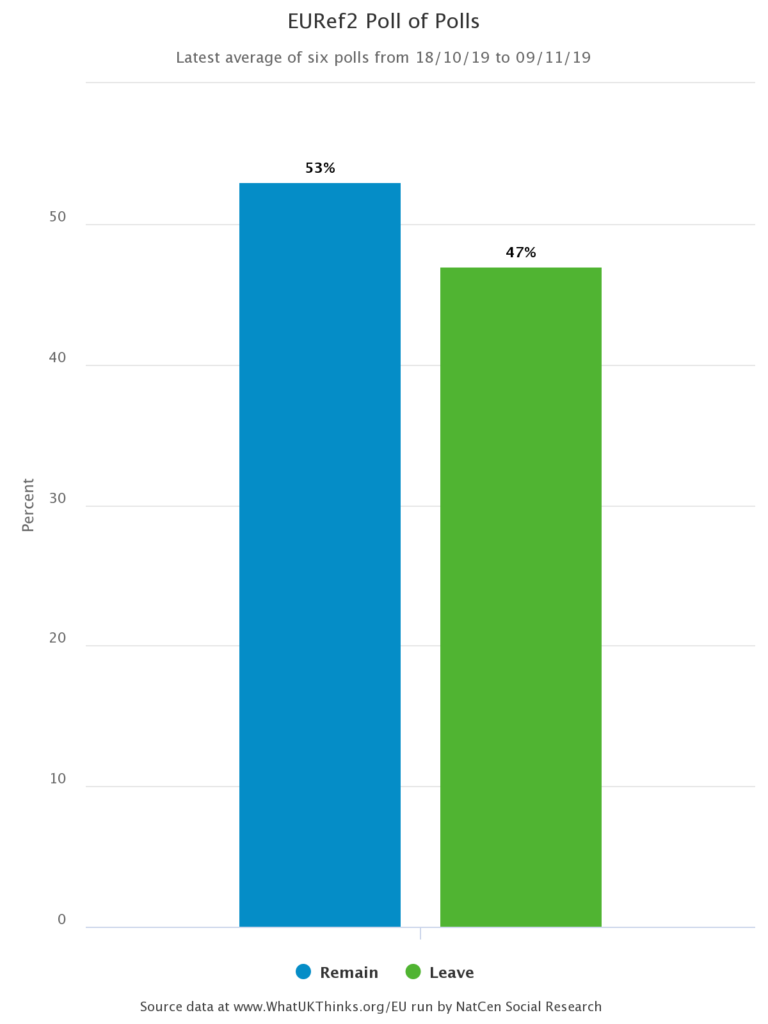 While there are multiple factors accounting for these poll results – and the polls, as has been shown in both the 2016 referendum and the 2017 general election, have got it wrong in recent years – clearly neither Labour nor the Liberal Democrats are succeeding in getting their message across. And the Conservatives are.

A short history of simple and blunt messaging
Elections are memetic wars. The war is about who can get their memes (ideas) across to voters so that the political party’s message influences the voter’s schemas so much that the voter votes in the way the party wants.

To understand at least partially why the Conservatives are getting their message across and Labour and the Lib Dems aren’t, it’s instructional to revisit the content and manner of message delivery during the 2016 referendum.

The Remainers by and large fought on sound political and economic grounds – George Osborne’s hysterical need for a new budget the day after a vote to leave excepted! Brexit makes no conventional economic sense. Every reported Treasury forecast – eg: BBC News (2018g) – has predicted the UK will be worse off, with a no-deal Brexit predicted to take over 9% off the economy. (As discussed in How the Plutocrats are waging War on the Bureaucrats…, Brexit does make sense if you are a large corporation wanting relief from profit-reducing regulations or a billionaire wanting to hide your money from the tax authorities.)

The Remainers hustled experts onto TV and radio in a bid to demonstrate just how economically damaging Brexit would be – only for Michael Gove to trip them up with a simple message, telling Sky News (2016): “people in this country have had enough of experts”.

Gove’s simplistic speaking authoritatively on behalf of ‘the people’, without any evidence to back up his claim, has come to typify the way politicians, particularly, on the right wing, talk about difficult issues. Watch Boris Johnson on the campaign trail: whenever he gets a troubling question, he flusters, looks to one side and then comes back to the questioner with something like: “Look, what the British people really want is…” (Donald Trump behaves similarly in the US.)

In contrast to the Remainers in 2016, the Leavers kept their arguments simple and emotive – eg: the bus with the message: “We send the EU £50 million per day. Let’s fund our NHS instead.” 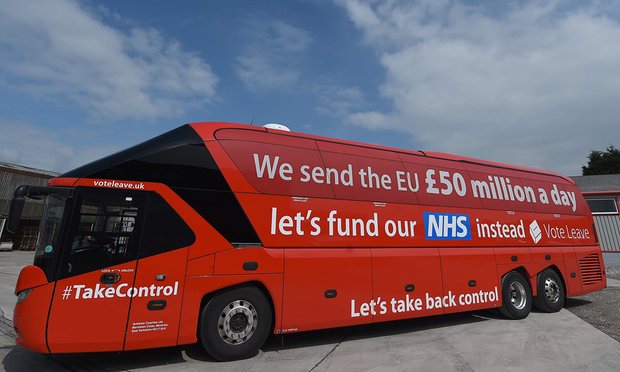 Such messages didn’t have to be factually accurate – indeed, many of them, like the bus one, weren’t. What they were highly effective in doing was to create an emotional response.

Richard Petty & John Cacioppo’s (1981) Elaboration Likelihood Model – see above – helps to explain why this approach is more successful with some people – those Susan Fiske & Shelley Taylor (1991) term cognitive misers. In Gravesian terms, these people will tend to be dominated by the PURPLE and RED vMEMES in their vMEME stacks. Literacy is not a strong point in PURPLE motivations while RED wants to get to the point now and has little patience for complex arguments. Thus, simplistic appeals on the peripheral route are much likely to be effective with such people.

BLUE and the more complex vMEMES tend to prefer the central route and consider the issues, pros and cons, at length and in detail. The Remainers’ financial and economic experts largely spoke to this group.

Unfortunately this divide in messaging is still in play today. The Remainers argue amongst themselves in public as to whether there should be a second referendum before revoking Article 50. Even worse, Labour’s position – negotiate a new deal and then have a referendum in which we may or may not support the new deal – is largely incomprehensible to cognitive misers.

The role of fear
A number of researchers have found that fear is a key component in effective messaging. Especially important is the work of Ronald Rogers (1983). He found that:- 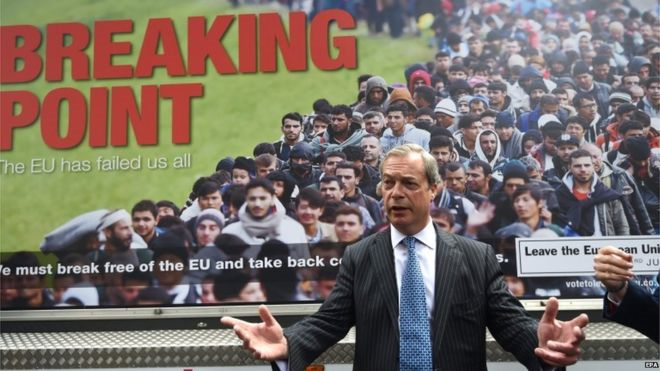 This is exactly what Nigel Farage did in 2016 with his infamous poster. Immigration had already become a major issue in the campaign – with racism and resentment and fear of immigrants and cultural change being exploited by the official Vote Leave campaign. Farage’s poster arguably made fear of Syrian (and other) immigrants being facilitated entry into the UK by the EU the defining factor in the Leave victory. As it was, the margin of victory was only just over 4%. Leave might not have had a victory at all without the effective messaging over immigration.

Leaving the EU was, of course, offered as the solution; and voters could implement this solution by voting to leave.

So far, while fear appeals are being used by both sides in the 2019 election, Remainer appeals are relatively restrained – and correspondingly ineffective? Whereas Boris Johnson exaggerates in highly emotive language the fear factor of the Conservatives not winning: “Imagine waking up on Friday 13th December and finding Corbyn at the head of his technicolour yawn of a coalition.” He talks of a a Jeremy Corbyn government being a “horror show” and of more years of “dither and delay” (As reported by The Sun’s Matt Dathan & Jonathan Reilly.)

Cleverly, Johnson has so far ignored the Lib Dems, thus giving out the implicit message that they are not serious contenders and thus are irrelevant.

If Remainers want to win, they need not only to simplify messages that appeal to voters’ values, they also need to use fear much more effectively – eg:-

Such messages are circulating in complex peripheral route formats. These need to be turned into simple slogans – soundbites, if you will – that aren’t up for debate but are treated as inescapable fact.

The role of the messenger
Petty & Cacioppo lay great store on the charismatic nature of the person who delivers messages on the peripheral route. They must be someone admired and trusted. So it’s worthwhile briefly considering the public personalities of the 3 main leaders.

…and 13 December
Who will be prime minster?

On current polling and behaviours, it looks like either Johnson will retain his premiership by a small but workable majority or there will be a hung Parliament again.

If the former is the case, then it looks like the UK is in for a hard-right government and most likely a hard Brexit.

If the latter, then a Labour government with Lib Dem support or a Labour/Lib Dem coalition of some kind has to be the way to restore moderate government to the UK. If Labour fail to secure a majority, then Corbyn’s days as leader will most likely be numbered and a pro-EU frontbencher like Kier Starmer elected to replace him. A Starmer-Swinson alliance could give Johnson considerable trouble in executing his post-Brexit plans. The pity is that such an alliance couldn’t be put in place before 12 December.

With just 4 weeks to go, the Remainers still have plenty to play for – as outgoing EU Council president Donald Tusk said today:  “Don’t give up” on stopping Brexit (Jon Stone & Chiara Giordano in The Independent). However, the Remainer parties need to simplify their messages and their leaders need to tackle their image problems. URGENTLY!

Money, Islamophobia and the Surge in Right-Wing Extremism Johnson’s Victory does not create Certainty