So sad to say…but this disaster for our kingdom was pretty predictable.  In Remainers need Simple Messages and Charismatic Leaders, I bemoaned Jeremy Corbyn and Jo Swinson, both as ‘personalities’ and for the messages they delivered. 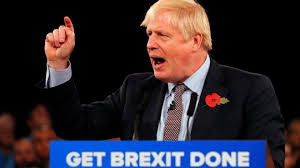 Neither looked or behaved much like a statesman or a stateswoman. To give him credit, Corbyn, when given the chance, can come across as having gravitas; but it’s difficult to envision him going head to head with Vladimir Putin or Emmanuel Macron. Swinson’s message was so easily caricatured as ‘undemocratic’ and ‘disrespectful’ of the 2016 referendum. Corbyn’s message was actually, in its detail, quite reasonable…but not translatable into a simplistic soundbite like ‘Get Brexit done!’

It’s debatable as to whether the electorate actually wanted Boris Johnson or they simply didn’t want Corbyn (or Swinson).

With a simple message and a charismatic leader, Labour should have walked this election. At the very worst, today we should be looking at a minority Labour government, supported by the Liberal Democrats and the Scottish National Party.

The Tories were so vulnerable on so many issues and Johnson is clearly non-empathetic and insensitive and has either gaffed, broken his word or outrightly lied so many times, it’s incredible that anyone trusts him.

But the anti-Semitism smears and the ‘terrorist sympathiser’ smears undermined trust in Corbyn too. My good friend David Burnby is a Corbynista and a Labour Party activist. Several times over the past year or so he ‘s told me how much he’s despaired at traditional Labour voters telling him on the doorstep they wouldn’t vote for Corbyn because “he’s an IRA sympathiser” or similar. Dave’s personal experiences seem to have been widely felt by Labour activists in this campaign. Several papers – eg: James Hockaday in the Metro – have attributed Labour’s poor performance to Corbyn being “vastly unpopular on the doorstep”.

In terms of Memetics, the memes pumped out by the right wing press have successfully infected the mind-brains of voters, changing their schemas to such an extent that they abandon traditional loyalties.

Clearly there were multiple factors influencing the way people voted. Corbyn being even more unpopular than Johnson – partly because of the media smears – was one of them. Boris having a very narrow focus on getting Brexit ‘done’ in a country suffering from ‘Brexit fatigue’ was another of them.

It’s also notable that in the past week Johnson fell back on the anti-immigration theme with his promise to stop European Union migrants from treating Britain “as their own country”. This is a base appeal to the PURPLE vMEME’s tribalism – to defend ‘our own’ from being abused by ‘others’, ‘those not of our tribe’. Johnson’s been a bit more subtle perhaps than Nigel Farage but he knows who his audience is and they know he’s speaking to them in their language about their values.

What happens now…?
On the face of it, the United Kingdom is out of the European Union on 31 January, the transition period ends on 31 December 2020 with or without a deal and the UK will negotiate a trade deal with the United States. The trade deal with the Americans will necessitate lowering food and animal welfare standards and American companies will have access to the National Health Service, most likely fuelling a significant hike in the prices of drugs. Brexit, according to the Government’s own forecasts, will shave anything from 2%-9% off the UK economy, reducing tax revenues and raising unemployment. The Government’s plan to counter that seems to be to turn the UK into a major tax haven – Singapore style – which will benefit the rich but have little ‘trickle down’ benefit to the poor.

The Scottish Government, with the Scottish National Party emboldened by its electoral increases, will push for a second independence referendum; Johnson has said his government will not grant that. So relations between Holyrood and Westminster are likely to become ever more strained. As for Northern Ireland, the loss of 2 Democratic Unionist Party seats to nationalists, one to Sinn Fein (hard nationalism) and the other to the Alliance Party (soft nationalism) indicates a possible decline in Unionism, with the potential for trouble a shift in the balance of power between nationalists and unionists could bring. ‘Embattled’ hard core unionists may well see violence as the way to stop the drift towards Nationalism.

Watching the Sky News election coverage last night, however, I was impressed with a point former Commons Speaker John Bercow made: that the size and nature of his majority gives Boris Johnson a flexibility Theresa May certainly never had after the 2017 election. All the Tory MPs are committed to Brexit, at least nominally – so Johnson shouldn’t have any problem with Remainers on his own side. The sheer size of his majority means he can afford to ignore the extremist Brexiteers of the European Research Group. Thus, he can choose to pursue a more moderate Brexit if it makes sense to him to do so.

What about the EU?
I’ve learned the hard way, when amoral figures like Boris Johnson and Donald Trump make big political waves, to look for who their backers are – and who is making money from these political chancers.

From researching How the Plutocrats are waging War on the Plutocrats…, it became clear to me that many in the Plutocracy want deregulation – from product safety standards to workers rights to health & safety and environmental protection. Such regulations restrict short-term profit-making. ORANGE thinking, which drives Capitalism, has often been criticised because it doesn’t see or else ignores issues beyond its own advancement. (ORANGE is an individualistic, self-oriented vMEME.) Thus, many in the Plutocracy are motivated by amassing their own wealth now and struggle to recognise that the climate emergency means their children and grandchildren may not be able to do much with that wealth in a water-logged, oxygen-starved and overheated world 50 years from now.

Thus, while media attention in the US focuses on Trump’s sexual misconduct and dirty politics, his administration has been quietly dumping hundreds of protective regulations virtually unnoticed by the mainstream media.

Those same plutocrats want the EU broken up because of the restrictions the Union imposes on transnational corporations wishing to operate on its territory. Rupert Murdoch, for example, has openly stated that he wants the EU broken up (Anthony Hilton, 2016). The EU Tax Avoidance Directive, coming into force in January 2020, gives the plutocrats a second major reason to oppose the Union and helps explain Johnson’s rush to get the UK out of the EU as quickly as possible.

So will Brexit start the break-up of the EU? After all, the UK is one of the ‘Big 3’ powers in the Union and the second largest financial contributor. The UK’s departure has to have a significant effect on the EU’s future.

The Independent’s David Keys thinks that longer term, Brexit may have a significant destabilising effect: “Many historians and political scientists believe that, while Brexit will probably not find any imitators in the short- to medium-term future, it will nevertheless gradually change the political balance within the EU. It will further increase the economic centrality of Germany, accentuate differences between France and Germany and increase divisions between southern and northern Europe. What’s more, divisions within the EU and potential post-Brexit economic and strategic tensions between the EU and the US (and between the EU and Turkey) could very well also weaken Nato. The EU and Nato have been the twin structures which have helped keep Europe largely at peace for so long.”

The Financial Times’ Gideon Rachman takes the view that Brexit is already having a destabilising effect on the Franco-German relationship.

Of course, the EU has done little or nothing to correct the flaws which have so allowed mischief makers in the British right wing press to present the Union as corrupt, wasteful and overly restrictive. Alan Tonkin, in The EU: an Organisation divided by Values and myself in Whither the EU? have discussed deeper structural issues the EU needs to address…but it has yet to seriously undertake reform. According to Rachman, Macron wants the EU to reform but is being stalled by Angela Merkel.

Rachman also gives the impression that the EU has largely accepted the UK’s departure and wants to move on and consolidate post-Brexit. It is to be hoped that, with at last the UK’s leaving finally confirmed, the Union will address the reform issues that, hopefully, will make it more cohesive.

And the UK’s future…?
The UK is undoubtedly in for a rocky ride, constitutionally, politically and economically….but we don’t know how the next 5 years will play out. Trade deals can take years so it is extremely likely that there will not be a deal with the EU in place by the end of December 2020. How quickly a deal with the US can be done will, in part at least, depend just how readily Johnson’s government capitulates to American demands.

Both business and the financial markets hate uncertainty so investment is unlikely to flood in – despite what Johnson has been saying – and sterling is unlikely to maintain the surges reported in the immediate hours following Johnson’s victory.

The only certainty Johnson’s victory has settled is that we will be leaving the EU on 31 January. Everything else is decidedly uncertain.

Remainers need Simple Messages and Charismatic Leaders Boris and Trump: How do They get away with it?