Home » Blog » Will the West seize the Opportunity the Peshawar Massacre may offer…?

Could it be that the horrendous events in Peshawar this week might just become a turning point in the rise of violent Islamist extremism…? A ‘watershed moment’?, as Aamer Ahmed Khan postulates for BBC News.

That great founding father of Sociology Émile Durkheim (1893) stated that when a particularly horrific crime takes place, there is often a drawing together of the community in a shared revulsion and outrage of the crime. This strengthens social cohesion – the sense of belonging to a community. 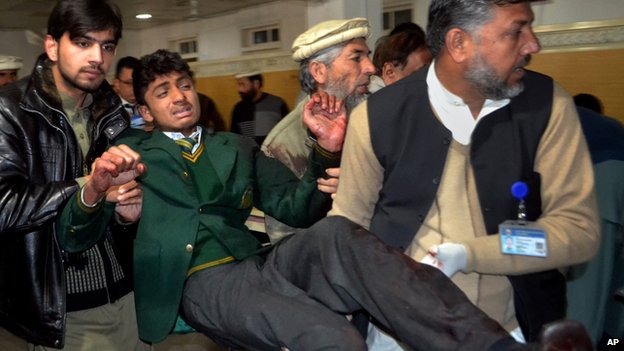 A wounded schoolboy is taken to hospital – copyright © 2014 Associated Press

For a day or 5 it may seem as though much of the world is a community – united and cohesive in its collective horror, outrage and sadness at the school massacre in Peshawar. Such is the public abhorrence that the pressure put on Pakistan’s politicians and military commanders may actually lead to them taking concerted offensive action against the Taliban.

For too long Pakistan’s leaders have been divided amongst themselves as to whether the risk of trying to use the militants to exert influence in the region (especially Afghanistan) was worth the terrorist atrocities committed on Pakistani soil and the opprobrium of the Americans…or they were simply indifferent to what the Taliban (either side of the border) did in their fight against the Westerners.  What actually seems to have mattered was advancing your own position while avoiding any blame. On the face of it, this reckless gambling with lives for unclear aims beyond personal aggrandisement seems typical of the RED vMEME.

If this vMEME, congruent with Sigmund Freud’s (1923b) concept of the Id in being unable to anticipate consequences, has dominated in the short-sighted thinking of Pakistan’s leaders, then it is little surprise that they have been outwitted repeatedly by the more complex RED/BLUE zealotry of the militants while offending India, the United States, the United Kingdom and a number of other key players in the area.

Amongst more serious allegations – eg: Praveen Swami (2012) in The Hindu – that the Inter-Service Intelligence (ISI)agency  (ISI) has been actively supporting terrorist operations in Afghanistan and India, numerous reports have documented, fairly convincingly, that Pakistan is allowing militant groups to operate freely on certain parts of its territory. As recently as June 2012, then-Defence Secretary Leon Panetta was reported by CBS News’ John Bentley to have said “the US was ’reaching the limits of our patience’ with Pakistan allowing militant groups to enjoy safe haven inside parts of the country.”

If, as reported by BBC News (2014e), Pakistan’s political parties have pledged to unite behind prime minister Nawaz Sharif against the Taliban, top general Raheel Sharif has gone to Kabul to discuss cooperation with his Afghan opposite number and there will be “no distinction between ‘good and bad’ Taliban” (Nawaz Sharif), then it does seem as though the sheer ruthlessness and brutality at Peshawar has isolated the most extreme militants of the Pakistan Taliban from their usual supporters. Even the Afghanistan Taliban have declared the massacre ‘un-Islamic’. (Khan explains the fuzzy difference between ‘good’ and ‘bad’ Taliban as: “Simply put, those active against Isaf in Afghanistan or against Indian security forces across the Line of Control in Kashmir were the ‘good’ Taliban. But those who had affiliated themselves to al-Qaeda after 9/11 and carried out terror attacks inside Pakistan were the ‘bad’ ones.” )

In which case, rather perversely perhaps, the Peshawar tragedy may offer a window of opportunity for some different strategies against the most extreme militants. Indeed, it may even offer the possibility of a process to achieve at least partly a rapprochement between Western liberal secular values and Islamic values.

Using the Assimilation-Contrast Effect
The type of assumption projected by the likes of Samuel Huntington (1993, 1996) that a total ‘clash of civilisations’ between the Islamic world and Western secular liberalism is inevitable is simply not borne out by recent history. Most Muslim nations gave tacit acceptance to the American invasion of Afghanistan in 2001 – some even overt approval. It was the botch the Americans made of Afghanistan post-invasion, when they allowed manifestly-corrupt RED-driven warlords to become the new rulers of the country under the façade of Democracy, which played all too easily as ‘insult to [the BLUE of] Islam’. That and the obviously-illegitimate and unjustified invasion of in Iraq in 2003, very quickly revealed to be based on a tissue of fabricated lies about Saddam Hussein harbouring terrorists and building weapons of mass destruction. No WMD were ever found and Iraq increasingly became a magnet for many psychoticist foreign jihadi.

The Qur’an (2: 191, 193) makes it clear a Muslim is to fight to prevent oppression of fellow Muslims. The wars in Afganistan and Iraq all too easily took on the appearance of a ‘war on Islam’, with George W Bush’s comments about a ‘crusade’ against terrorism (Peter Ford, 2001). Unsurprising then that ‘terrorist attacks’ have quadrupled since 2001 (Becky Evans, 2012) and, according to a 2005 YouGov poll, 26% of British Muslims surveyed refused to condemn the London bombings while 6% said they were ‘fully justified’ (Anthony King, 2005).

With the unjustified invasion of Iraq and the callous treatment of Iraqi civilians – most notably at Abu Ghraib – the British and American governments effectively contrasted themselves to their Muslim populations. This put many Muslims in a deep BLUE quandary about duty: do they stay loyal to their country and effectively support a government which is seen to be brutalising fellow Muslims or do they do their religious duty and fight with their brother Muslims against their country?

There will always be a psychopathic/psychoticist element who will use any and all excuses to express themselves by doing destructive harm to others – and many jihadi groups have become media savvy and truly expert in getting to such people. ISIS – the so-called ‘Islamic State’ – are especially notable for their slick videos and online recruitment campaigns.

However, as the brutality of the jihadis has become more and more wanton and the perpetrators seeming to delight openly in ever-greater depravity, more and more Muslims are becoming sickened. Even those who have a problem with Western secular liberal values are starting to support imams and scholars who issue fatwas declaring the violence ‘un-Islamic’. Reports of demonstrations by Muslim groups against the extremists are becoming more and more frequent – eg: CBS News’ Jacky Naegelen (2014). Nihad Anwar (2014), National Executive Director of the Council on American-Islamic Relations, has written that the likes of ISIS are actually ‘anti’-Islamic’ and implores the media not to use the terms ‘Islamic State’ “because it has nothing to do with Islam” or ‘jihadists’ because the fighters are not in a jihad (personal struggle) for religious piety.

With more and more moderate Muslims wanting to distance themselves from the extremists – the contrasting effect in ACE terms – now is the time to work on the assimilating effect by playing down differences between Western secular values and Muslim values, emphasising the similarities and, where appropriate, accommodating the concerns of Muslim minorities about Western society.

At the end of the day, most people of whatever faith want a good number of the same things. To be safe, to have a reasonable income and job security, respect for family values, good education for their kids, have workable laws that reflect common values and norms and a justice system capable of catching and punishing the real criminals, reasonable freedom to do things that interest/please you and freedom to worship your God according to the tenets of your faith.

As ACE demonstrates, assimilation with moderate Muslims isolates and undermines the extremists and creates the climate in which to neutralise them – see Killing the Terrorists.

Of course, creating an assimilation effect with moderate Muslims creates its own issues – see Islamification: Europe’s Challenge – which means Western secular liberalism has to find a way to genuinely accommodate the concerns of its sizeable Muslim populations. With Muslim populations in Western Europe growing faster than the (faux-Christian) whites – some estimates project Muslims to be up to 30% of the UK population by 2050 – politicians will end up having to court their vote anyway. So it’s better to find ways to start giving homegrown Muslims the sense now that they will have a voice in the way their countries develop in the coming decades and that Islamic values can have an influence. Strategies to encourage the BLUE of such Muslims to assimilate the memes of civic responsibility and to stimulate ORANGE to sense opportunities for personal future achievement within the frame of civic responsibility.

This analysis shows just how complex these situations are and how there is no simplistic solution…but an unending need to shift the checks and balances on a regular basis.

Why doesn’t the West support moderate Muslims?
For as-yet-unexplained reasons, the West has largely ignored moderate Muslim denunciations of Islamist terrorism. 4.5 years ago, I wrote Why is the West ignoring a Leading Moderate Muslim? in my frustration that renowned Muslim scholars like Muhammad Tahir-ul-Qadri, who were issuing fatwas denouncing extremist violence, were effectively being ignored.

Little has changed since then. There has been a conspicuous and consistent failure by both governments and media to draw attention to and support moderate Muslim leaders like ul-Qadri. Even the recent condemnation of ISIS for the murder of Alan Hennings had only brief coverage – eg: Mark Townsend & Tracy McVeigh in The Guardian.

It is tempting to speculate whether it serves Western governments to have both an external existential threat like ISIS and an internal threat of 5th columnist Islamist extremists (from the homegrown London bombers of 2005 to this week’s Sydney café gunman). Do some of the less-wacky conspiracy theorists have a point or 2…?

Media sociologists like David Edwards & David Cromwell (2006) argue that the Capitalist elites do indeed manipulate the media to focus on stories that serve to maintain their control on society while obscuring narratives such as 5% of the West’s population owning 90% of its wealth. If so, then maintaining the profile of a common threat does serve a purpose. From the 1950s through to the 1980s the Soviets were the external existential threat; these days it’s violent Islamic extremists. Reducing the threat by allying with moderate Muslims would hardly further the purpose of elitist control of society.

Of course, Edwards & Cromwell have little solid evidence for their theory – it’s a philosophical interpretation (a meta-state) of the information available to them. Nonetheless, it could offer an explanation for why Western governments and media put so little effort into supporting moderate Muslim scholars and imams.

This week alone Islamist militants have also been responsible for the following:-

…and, of course, ISIS continue their relentless slaughter of anyone who doesn’t do exactly what they say – Shia, Westerner or even Sunni.

Perhaps the rate and brutality of extremist atrocities is now reaching such a pace that outrage amongst moderate Muslims will take on such a life and strength of its own that the Western governments and media can no longer continue to ignore it.

It would be better though if the Western governments and media acted proactively and sought to promote moderate Muslim scholars and imams in a sustained and supportive manner.