Home » Blog » Why Scotland and rUK need Each Other

Whatever decision the Scottish electorate make on 18 September – and personally I hope very much they vote to stay in the UK – it needs to be made by a decisive majority. The worst possible outcome would be a wafer-thin majority for either camp – which unfortunately is exactly what the latest polls are predicting.

A thin majority for the separatists would leave a sizeable minority of Scots alarmed that their country was leaping into the financial and political abyss, reflected in the anticipated flight of capital and business. A tiny minority for the unionists would leave the separatists angry and frustrated, blaming Westminster and the media for manipulating the vote, and vowing still to free Scotland from the English. 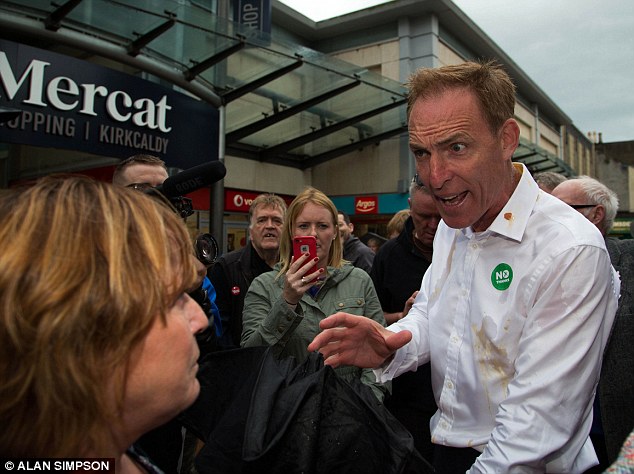 The campaigning has been increasingly bad-tempered and vitriolic as the referendum approaches. It would appear from media reports that the worst of it – such as the torrent of online abuse targeting J K Rowling (as reported by the Daily Telegraph’s Ben Riley-Smith) and the heckling and egging of Scots Labour MP Jim Murphy (as reported by the Daily Mail’s Tamara Cohen & Kaleda Rahman) – has come from the separatists. This would indicate a large degree of RED/BLUE zealotry – the cause being more important than morality, compassion or security.

While the unionists have also broken the ‘rules’ – eg: the motorised pursuit and harassment of Alex Salmond by an enraged driver waving a No sign (as reported by the Huffington Post’s Jack Sommers) – this is more likely to be a reaction by the RED vMEME to PURPLE’s sense of security being undermined. From the unionist perspective, the fear of higher mortgages and prices in general, the threats by leading businesses to go south, and the uncertainty over what currency an independent Scotland would have and whether it would have automatic membership of the European Union, etc, etc…all these fears and uncertainties will not be addressed by BLUE conformity and obedience. Thus, there is a natural descent of the Spiral so RED can fight to protect what PURPLE’s got from being thrown away.

Of course, the No campaign has been lacklustre and complacent. Putting a dull administrator like Alistair Darling up against a charismatic orator like Salmond would appear to have been a major tactical blunder. Darling may have made Salmond squirm on the policy issues in the first TV debate (5 August) but Salmond simply blustered and charmed his way through the second one (24 August), mostly ignoring Darling’s dull drones on policy.

Until Boris Johnson got involved (with his 8 September article in the Daily Telegraph), there was little passion in the No campaign. Thankfully Gordon Brown has now taken a leading role in the No campaign and his 12-point ‘devo max’ blueprint may just yet persuade the undecided that this is the best option available.

But a wafer-thin majority will not settle the issue. Whatever Alex Salmond said on this Sunday’s Andrew Marr Show (as reported by the Independent on Sunday’s Adam Withnall), the zealots will carry on, regarding such a referendum defeat as merely a set-back on a journey Scotland must complete. They are, after all, men and women on a mission!

It is not beyond conceivability that those zealots who are high in the temperamental dimension of Psychoticism might even resort to acts of terrorism to further their goal of an independent Scotland.

To turn Gordon Brown’s blueprint into a real referendum winner, the No campaign needs passion and an appeal to a shared past that can predicate a shared future.

To hit PURPLE’s valuing of tradition, there needs to be talk of a shared British heritage between Scotland and the rest of the UK. The concept of the ‘United Kingdom’ needs to be eulogised with talk of a union of 3.5 small countries – Northern Ireland is the half – punching well above their combined weight through a unique combination of complementary national characters and talents.

Look at what the UK has achieved together so far…and project a vision for what the UK can achieve together in the future.

Unfortunately neither David Cameron nor Nick Clegg nor Ed Miliband are exactly grand vision men. Cameron and Clegg are also soiled goods north of the border while Miliband simply doesn’t have enough charisma to take on Salmond.

Boris Johnson’s got some degree of vision and he’s certainly got charisma; but the Machiavellian clown image he so often projects doesn’t always go down that well outside of London.

With just 3 days to go, the No campaign desperately needs a charismatic figure who can sell Brown’s blueprint with real passion.

Cameron’s double bluff…?
Last week David Cameron was widely reported – eg: Joe Murphy in the London Evening Standard – to have said: “I care hugely about this extraordinary country, this United Kingdom that we’ve built together. I would be heartbroken if this family of nations that we’ve put together was torn apart.”

He also said: “I love my country far more than I love my party.” What he was referring to is the fact that Labour would lose over 40 MPs from the House of Commons if Scotland no longer had representation there, thus dramatically increasing Tory prospects of gaining an overall majority in future rUK elections. So Cameron was making out that he would prefer Scotland to remain in the UK even though doing so would lessen the Conservatives’ prospects of future majorities at Westminster.

On the face of it, then, Cameron would indeed appear to love his country more than his party. However, the terms he agreed with Salmond in the Edinburgh Agreement of 2012 were extremely generous to the Scottish Nationalists and have undoubtedly worked to their advantage – viz:-

So is Cameron double-bluffing? The Queen and the Tories may be furious if Scotland is lost on Thursday and there will be pressure on him to resign as the man who oversaw the dissolution of the 1707 union; but, if he can all but guarantee the Conservatives to be the dominant political party in Westminster, they are likely to forgive him and may indeed crown him as effective leader for life. It would certainly see off Boris Johnson’s increasingly-overt intention to challenge him as leader. At least in the short term.

If a strategy so Machiavellian it could outfox Johnson seems overly fanciful, the extent of Cameron’s ambition should never be underestimated. His ORANGE has consistently outwitted Nick Clegg’s woolly BLUE/GREEN thinking throughout the life of the Coalition government.

Even Cameron taking to the cities and towns of Scotland to campaign for the No vote this week could be a double bluff. As said, he is spoiled goods north of the border (if not north of Manchester!). Former Labour deputy prime minister John Prescott describing Cameron coming on the campaign trail as “a hindrance”, according to BBC News (2014d), is perhaps rather telling.

The icing on Cameron’s cake would be if the dire predictions of an independent Scotland failing economically – eg: Credit Suisse and Deutsche Bank (as reported by The Scotsman’s Bill Jamieson) – came true – leading to a broken and bankrupt Scotland begging to be reunited with rUK in, say, 7-8 years time. Despite what Alistair Darling has said about there being no way back (as reported by Withnall), there is always a way back. For the Conservatives to dominate Westminster and then let the Scots back in on their terms would be triumph indeed!

Of course, my attempts to understand David Cameron’s motivations may have gone seriously awry and I may be doing the man a gross injustice. I’ve never met him and my knowledge of him is filtered through the media whose editors all have their own agenda in presenting Cameron in a particular way. But, on the filtered evidence we have, an ORANGE double bluff is not beyond possibility.

Either way Cameron can win. He can be either the man who saved the union or the man who gave the Tories unprecedented power at Westminster. If that isn’t Machavellian…?

Is it in England’s and Scotland’s Interests to keep the union?
On 10 September John Prescott told voters in Rutherglen: “We in the northern areas and the English regions look to your support to make sure we are able to deal with a massive Tory vote.” (BBC News)

Effectively Prescott was appealing to the Scots to save rUK from what would likely be generations of Conservative domination of Westminster.

A number of studies – eg: John Curtice & Ben Seyd (2003); John Curtice (2005) – have shown that voter apathy increases when there is less choice perceived, leading to the dominant politicians becoming more and more confirmed in their power. For Democracy to function, there needs to be choice. Scottish independence would lead to substantially fewer Labour MPs at Westminster and voters in rUK perceiving less chance of electing an alternative government to the Conservatives. Thus, Democracy in rUK would become more and more compromised.

So, for rUK’s democracy to work as it should, the Scots are needed.

But do the Scots need rUK.? Most of the economic pundits say unreservedly Yes. While Scotland might eventually become a prosperous Nordic-type society and economy, in the short term it is likely to suffer enormous damage, particularly to its financial sector and is likely to  find it almost impossible to raise credit on the international bond markets

However, keeping the union shouldn’t be like keeping a bad marriage going because the partners can’t afford the financial ramifications of splitting up. There also needs to be passion. Very few marriages can sustain continuous passion – there are far too many things to disagree about! – but most good marriages have passion quite frequently and the partners know how to rev up the passion. The union needs to rekindle its passion. Boris Johnson understands that. The UK needs a vision for going forward which will engage all its constituent countries.

The vision needs to look outwards to reaffirm and secure the UK’s place in the world. It also needs to look internally to restructure how the UK is governed, to right many of the wrongs in the way the kingdom has been governed in the past. The government of the UK needs taking away from Westminster and restructuring so that all the constituent countries and regions are given due representation. Gordon Brown’s 12-point devo max can inform such a process; but it should be seen as a start, not a completion.

So there are ways to give all the people in the UK better representation and the Scottish independence issue will have served the kingdom well if it acts as a catalyst for this.

Articulating clear vision and having the charisma to sell it are what is needed to build a stronger UK which incorporates Scotland.

The Madness of Pietro Poroshenko…? Will the West seize the Opportunity the Peshawar Massacre may offer…?